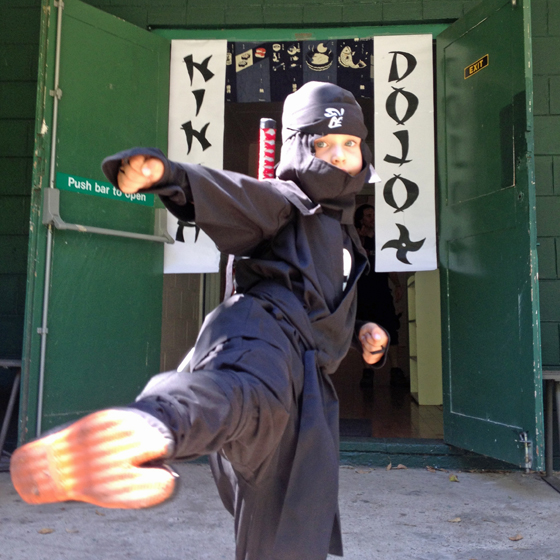 I’ve said it before and I’ll say it again! Those madcap medicos at Casa Conception (the wonderful IVF clinic responsible for the existence of Raffles and Sugarpuff) must have embraced their inner mad scientist when they were shaking up my embryonic cocktails in the lab.

I swear that somewhere along the line they gave our contributions to the petri dish a quick stir with a swizzle stick dipped in a little international DNA before serving them back to us with little embryo size cocktail umbrellas. Or at the very least they forgot to wash their hands after a lunch of sushi… because in spite of Raffles and Sugarpuff’s overwhelmingly British, Aussie and Kiwi genetics, they both appear to think they’re Japanese.

Raffles, who has his heart set on a career as a ninja when he grows up, has long obsessed over all things Japanese and is busy saving his pocket money for a trip to Japan, which should happen – based on his current savings and inflation – somewhere around 2078, give or take a decade. My daughter too has traded Peppa Pig for constant re-runs of Adam Liaw’s Destination Flavour Japan, a peculiar viewing choice for a three-year old, but that’s how she rolls.

Needless to say that it came as no great surprise that both of them wanted to celebrate their recent birthdays in true Japanese style.

Sugarpuff’s request was simple. As long her party came in pink and Hello Kitty was the guest of honour she was happy.  A giant balloon, some pink snacks and a pink kitty cake later and we had one satisfied customer. Easy. 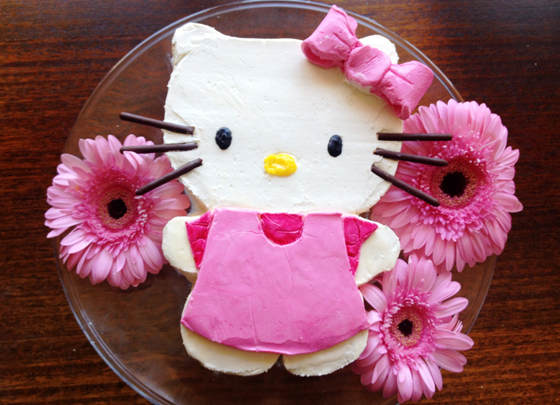 But then along came Raffles to complicate things. Raffles is a small boy who is big on details, and simple is not his style.

You see he’d been planning his 6th birthday party for 363 and ¾ Days. When, at the end of his 5th birthday he’d announced that there would be ninjas at the next, I had quivered with fear. After five birthday celebrations with my decisive dictator I was very familiar with this scenario and knew that this was no whim.

There would be no changing of minds between now and his actual birthday, just an ever deepening resolve and endless obsessive instructions by my pint-sized party planner. And this wasn’t to be just any old ninja party. Oh no, that would be far too easy. There would be no cartoon turtles or spinjitzu for Raffles. This would be Ninja – Japanese style. Crap!

With his actual birthday falling a full week before his party Raffles, being a method actor, started to get into character for his upcoming shindig with dinner at a local udon noodle restaurant. But this, of course, was never going to be enough for Raffles, and a week-long Japanese cuisine extravaganza that would culminate in the “Ninja Event of the Century” was the result. I pulled out all our favourite recipes – salmon donburri, ka arage, sushi, and shabu shabu – and let our local Japanese assist with sukiyaki, gyoza and sashimi, making for a rather delicious and nutritious way to spend our culinary week. 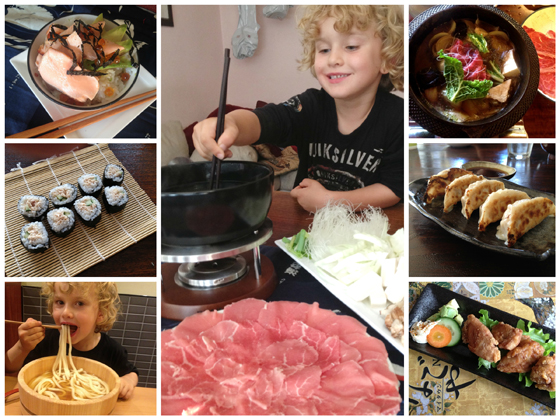 Invitations were created and had been sent to all the bravest warriors he knew.

In the Casa Eats World kitchen, edible shurikens were made (twice, because we ate the first lot…whoops) and platters of Ninja Bread Men were baked and iced. 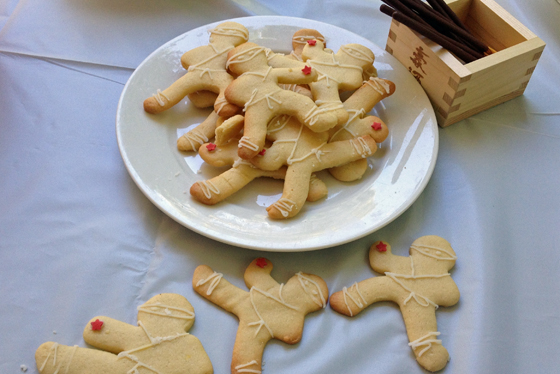 Enough sushi was rolled to feed a small army of ninja. 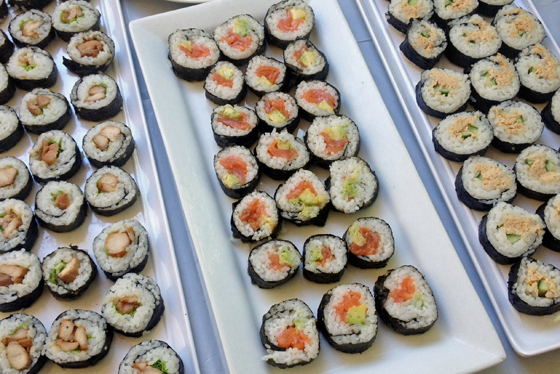 An utterly epic (even if I do say so myself) cake, complete with edible ninja, was created. 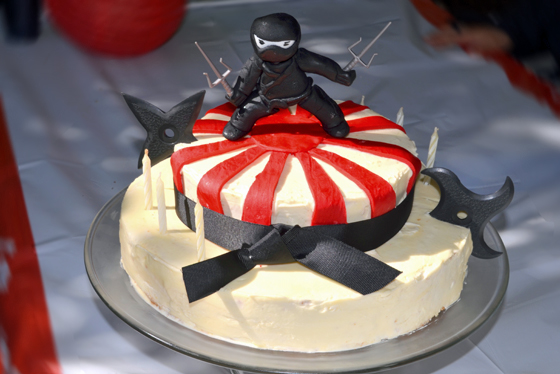 Our living room became a weapons manufacturing plant as dozens of foam nunchucks were produced for training. 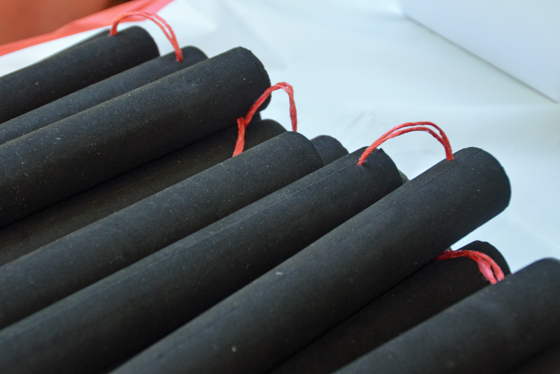 In fact, so efficient was the production line, we may just branch out into arms dealing if money gets too tight.

A giant Ninja Piñata was made and filled with Japanese sweets and treats. Though, in all honesty, I ate so many of them while filling it I’m surprised the kids didn’t come after me with a big stick.

Raffles very own authentic Japanese ninja uniform complete with jika-tabi (literally earth socks). And, though I must admit to a little parental bias, you gotta admit the kid looked kick-arse! 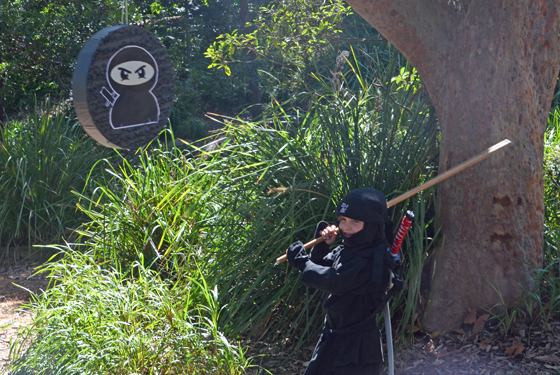 But still something was missing.

And that something was an actual ninja.

I’m not sure if anyone else has noticed but ninja’s tend to be thin on the ground in Sydney. Either that or they’re just so good at hiding I haven’t spotted any. That is until Raffles party… 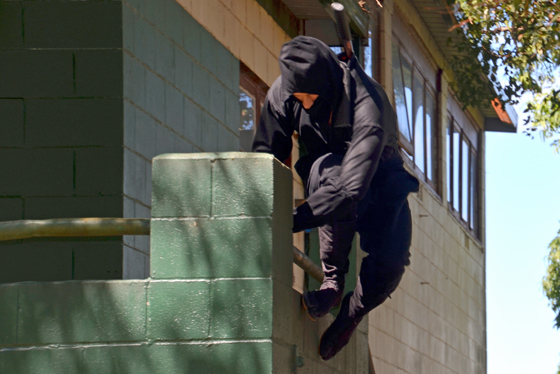 I’ve never paid for entertainment at a kid’s party before because I’ve always been of the “if I can’t do it myself, it ain’t happening” school of party planning.  But I couldn’t make a ninja, Mr Eats World refused to take one for the team and, given that I have all the strength, stealth and agility of the average house-brick I wasn’t going to cut the mustard, or should I say wasabi, as an invincible Japanese assassin. So I turned to my BFF, Uncle Google, who in turn led me to the fab folk at Kapow Parties where, low and behold, a “real live ninja” (read, a guy in a suit) was available to train our wee warriors.

And though it pained me to part with cash, it was the best party investment I’ve ever made. I was even able to sneak off – with all the stealth of a ninja – to relax with a glass of sake, as 20 sugared-up six-year olds were being put through their paces by this guy… 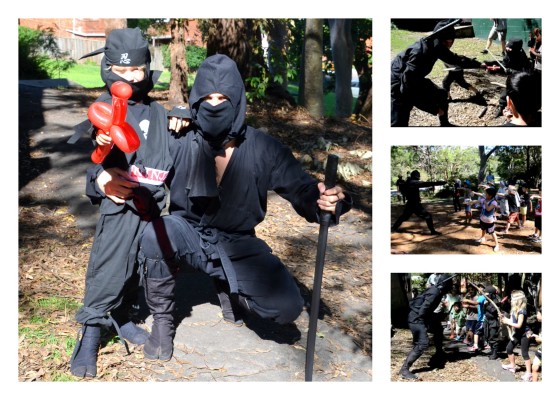 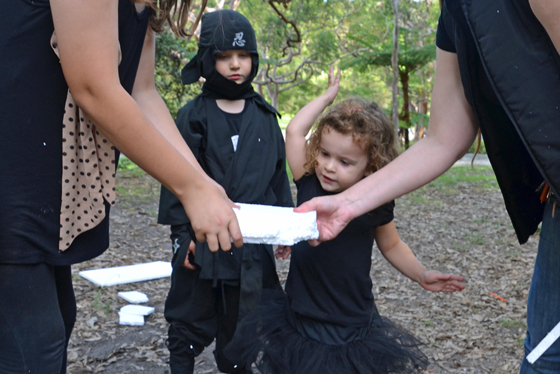 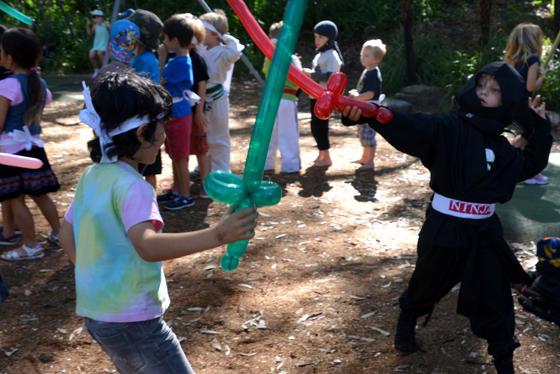 24 Comments on Turning Japanese at a ninja birthday party