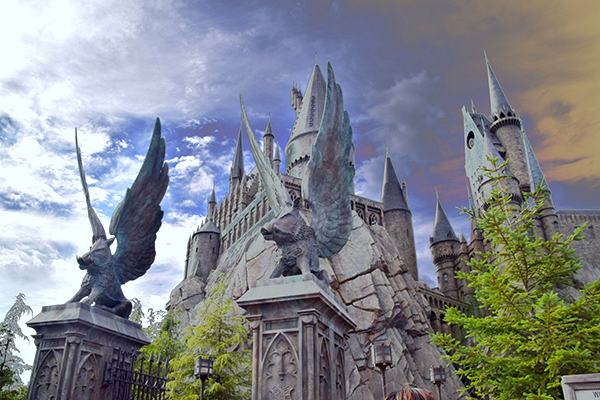 Unlike the rest of warrior packed Japan, Raffles beloved Ninja seem to be a little thin on the ground in Osaka. Maybe it is because we’re not looking hard enough (a good ninja isn’t easy to spot), or maybe it is because they’ve been vanquished by all the wizards. You see Osaka is also home to Hogwarts School of Witchcraft and Wizardry, to which Raffles and Sugarpuff have just received their acceptance letters.

Actually, they just got tickets to Universal Studio Japan and the Wizarding World of Harry Potter, which I purchased at the gate after queuing with the rest of the Muggles… but I digress. We’re here for a little hocusey pocusey action of the Potter kind and Raffles and I are as excited as a golden snitch at a Quidditch final.

But before reach Hazza and his pals, we get to explore the rest of Universal Studios and it becomes quickly apparent that there’s more than Hogwart’s brand of sorcery to be found in this magical place.

Sugarpuff is soon under the spell of the one and only Hello Kitty in her retina-searing palace of pinkness. 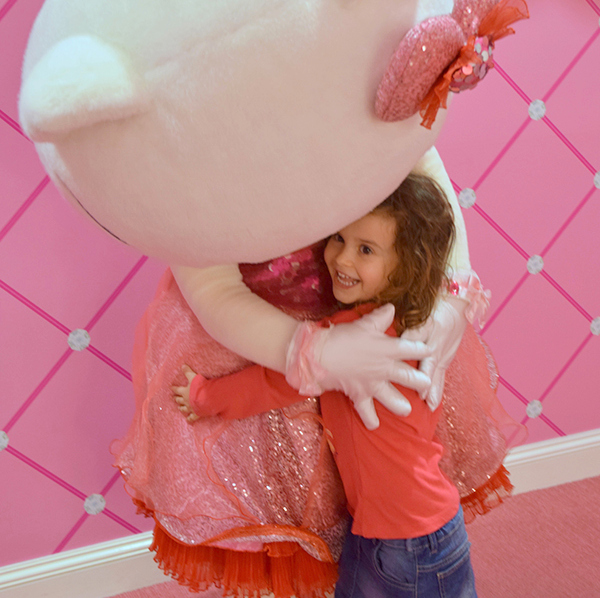 She hangs out with Spidy! 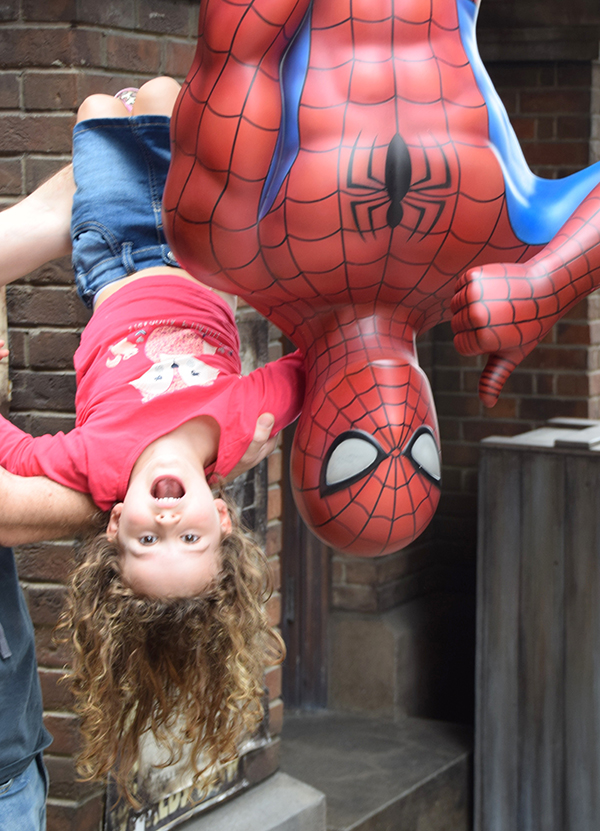 And makes some funky new friends! 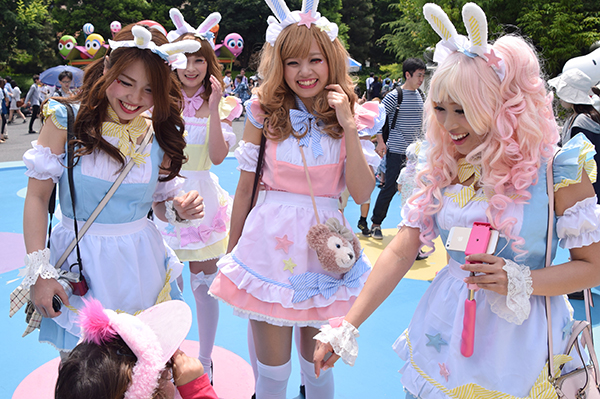 But, in case you were wondering what magic really looks like, I’d say the pure unadulterated joy on her face as she doles out the cuddles to the cast of Sesame Street is pretty much the most enchanting thing I’ve ever seen. 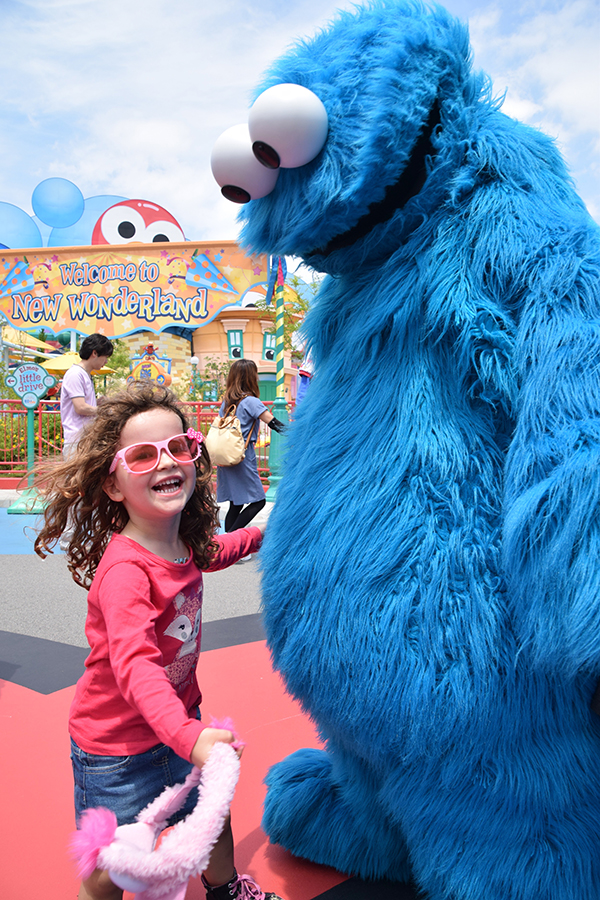 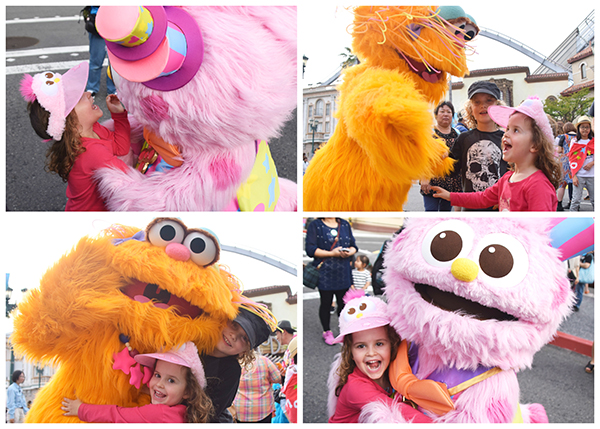 But Raffles is wild about Harry and the Wizarding World of Harry Potter, which we reach by following a winding path through a forest past the wreck of the Weasley’s Flying Ford Anglia, is his Hogwarts fantasy come to life. 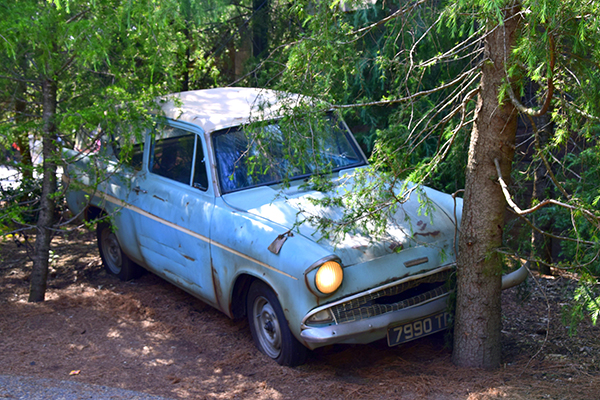 From the cobbled streets  to the slanted buildings coated in magical puffs of faux snow, it is like stepping into a real life Hogsmeade. 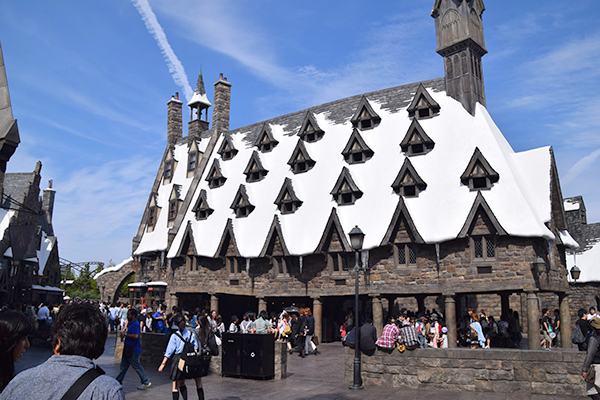 We sip on Butterbeer (imagine liquid butterscotch topped with cream). 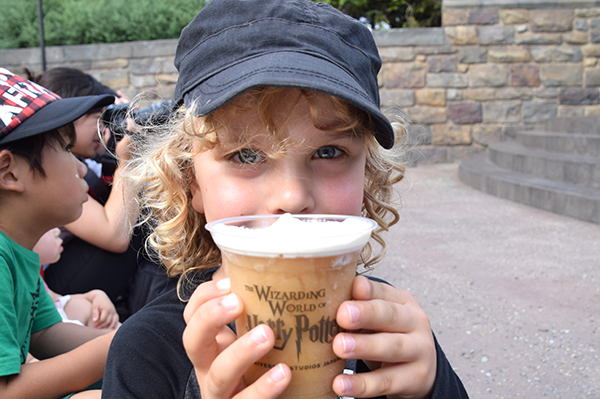 We explore Zonko’s Joke shop and the Owl Post Office. 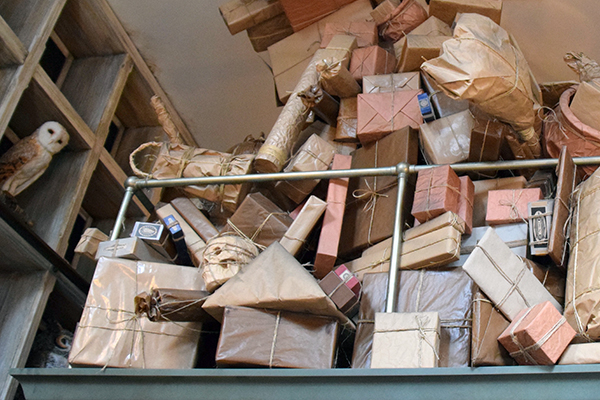 Pop in for fish and chips at the Three Broomsticks tavern. 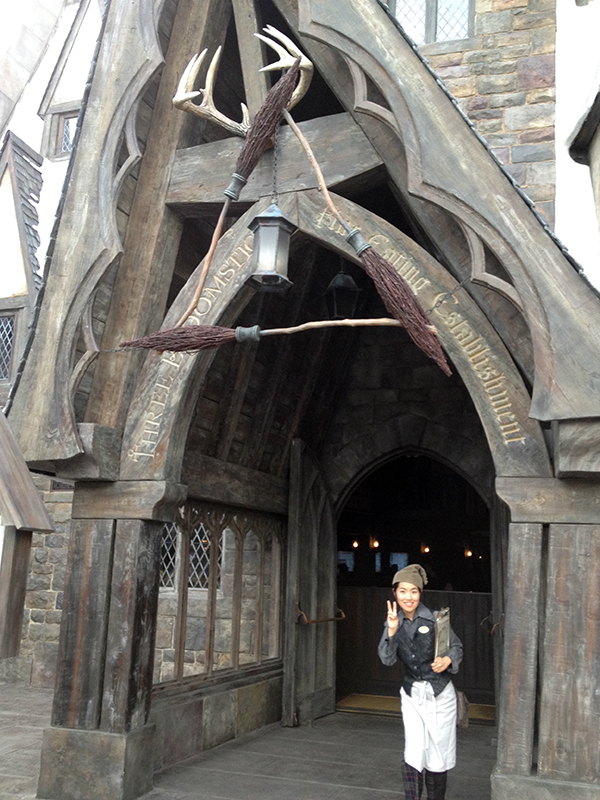 At Ollivanders we stop to stock up on wands. 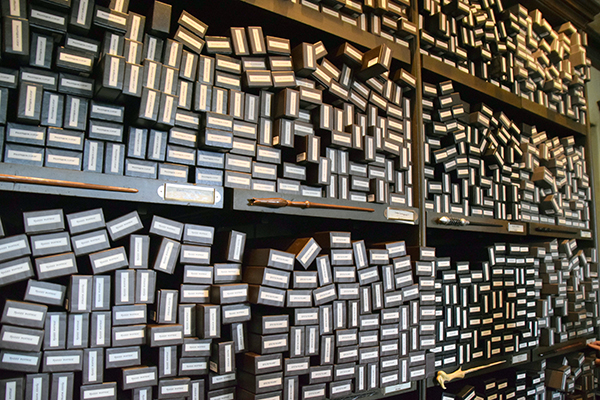 And at Honeydukes we fill our gobs with Chocolate Frogs and Bertie Bott’s Every-Flavour Beans. 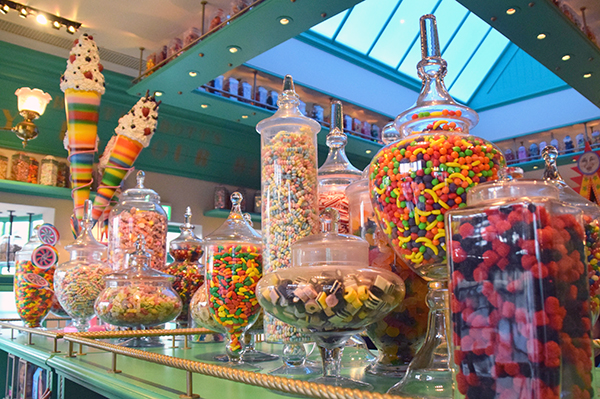 My little pothead is so excited he’s soon flying without the assistance of a broom! 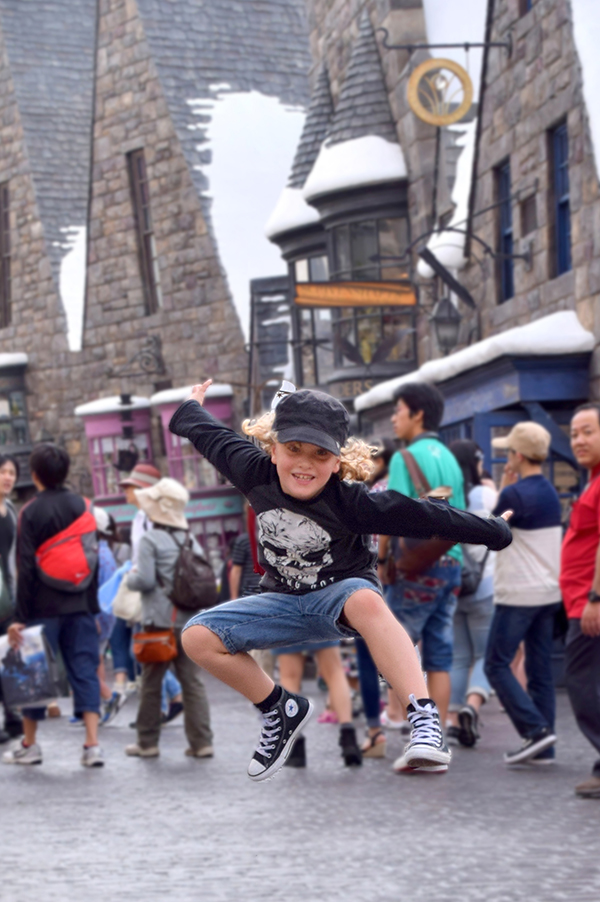 We scrape our jaws up off the ground at the awe-inspiring sight of the Black Lake and the towering spires of Hogwarts. 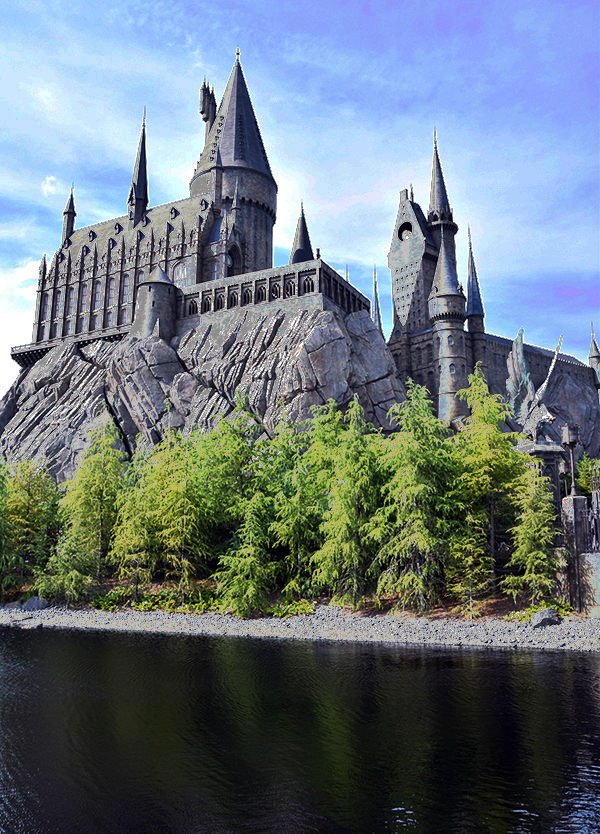 Inside we head follow the hallways past bickering portraits to Dumbledore’s office and even bump into Harry, Ron, and Hermione themselves in the Defence Against Dark Arts classroom. 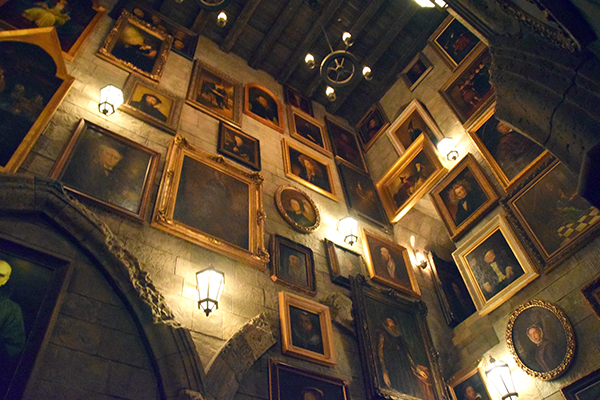 Well at least holograms of Raffles’ Hogwarts heroes, who, like Moaning Myrtle, are (understandably) fluent only in Japanese. So we know not what they are gibbering about! But the kids are excited anyway!

The rest of the clan takes on the  4D visual rollercoaster and brave a ride on the family-friendly Flight of the Hippogriff mini coaster, something I, being a non-coaster kinda gal, happily skipped! 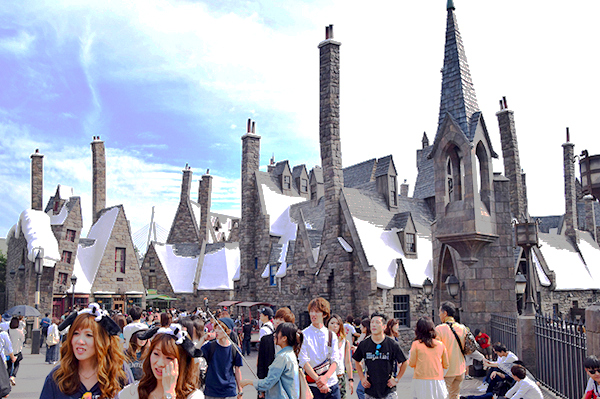 After our huge day of Hogwarts hijinks we’ve worked up an appetite and the kids have decided in honour of Harry that they want “Japanese Golden Snitches” otherwise known as Takoyaki, for dinner!

We’re so wild about the Wizarding World of Harry Potter and those addictive octopus balls that we’ve conjured up a recipe for Japanese Golden Snitches, which you can find here. Enjoy!