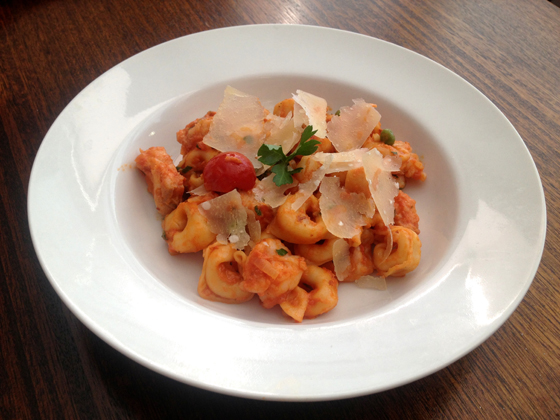 Before having any actual children Mr Eats World and I, staunch pacifists, made a vow that we would keep our offspring’s childhoods free of toy guns. But in all our idealistic fantasies of a violence free kiddy utopia we never anticipated that we might produce a child obsessed with Vikings, samurais and ninjas… and all their sharp and pointy accoutrements.

So, though I can proudly say Raffles has never owned or played with (at least on my watch) a toy gun, he has managed to build an arsenal of swords and daggers roughly similar in size to the armory of a small country. And, though they’re all foam and plastic, I guess that’s what’s known as a parenting fail.

What is most ironic about Raffles penchant for weaponry of the cutting and stabbing variety is, that though he spends quite a lot of time in the kitchen, he’s never even been allowed to hold or use a kitchen knife. Something I told him he wasn’t going to be allowed to do until he turned six.

Needless to say when the folk at Barilla sent us some samples to try around the time of his sixth birthday, Raffles immediately put his hand up to take over the test kitchen. Not only did he want to make dinner for us, from scratch, WITH A KNIFE, but he wanted to come up with the recipe too. And, he declared, Sugarpuff would be waiting tables. Aide moi!

His father and I feared that blood would be shed at Casa Eats World but, nervously, gave him the go ahead and, under very strict supervision, allowed him to do his culinary thing.

He chose to make Barilla Tortellini, already a fave, and prepared a shopping list of ingredients for his “creation” which was to include fish, prawns, canned tomatoes, cherry tomatoes, cream, parmesan, parsley, peas and broccoli –  a strange combination and not the first items to spring to my mind when dealing with tortellini but this wasn’t my gig and really, who was I to question his art?

We set up all the ingredients for Raffles and gave him a few tips on safely handling a knife which he tried his best to implement while I, terrified he would lose a finger, hovered nervously. Given this was his first time using a sharp knife I confess to having pre-chopped a little onion and garlic for his sauce before he started so it didn’t begin and end in tears. But it was Raffles who carefully sliced the cherry tomatoes and prawns in half and the fish into bite-sized chunks. 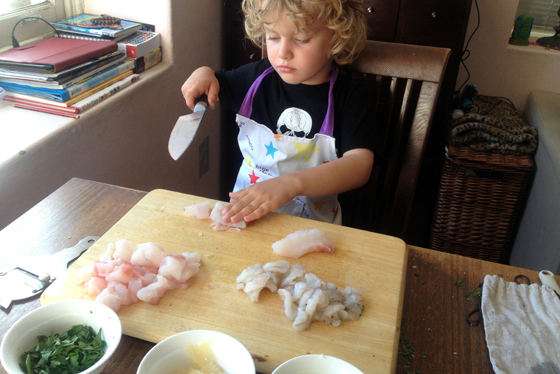 He roughly (very roughly) chopped parsley and broke of small sprigs of broccoli and carefully shaved some slices of parmigiano reggiano while Sugarpuff set the table… and ate most of the cheese.

Happily, with all the cutting out of the way, our dinner-to-be remained digit free.

At the stove he carefully added the pasta to boiling water, browned the fish and prawns and then removed them to one side. He sautéed the onion and garlic and added a half a cup of  crushed tomato and a pinch of sugar (a tip from mummy) then the broccoli, a half a cup of frozen peas and a wee splash of cream. This kid has been paying attention!

For safety sake I drained the pasta and popped it into his simmering pan of sauce but let him carefully stir it and the pre-cooked seafood through. A quick taste test and he decided to sprinkle in a few chilli flakes and a pinch of salt “to give it some bang” before he popped in the parsley and dinner was ready for his baby sister to carry to the table. 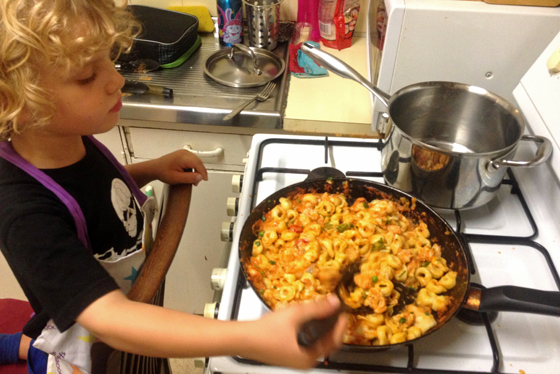 The result?  Delicious. And messy. Raffles even going as far as to modestly declare it the best meal ever cooked in the Eats World kitchen. In fact, he’s so proud of himself he’s already planning his next Barilla pasta meal only next time he’s going for the fusili and will do “something with sausages, mama”.

Which I guess means that I will be doing something with detergent and dishes… lots and lots of dishes. 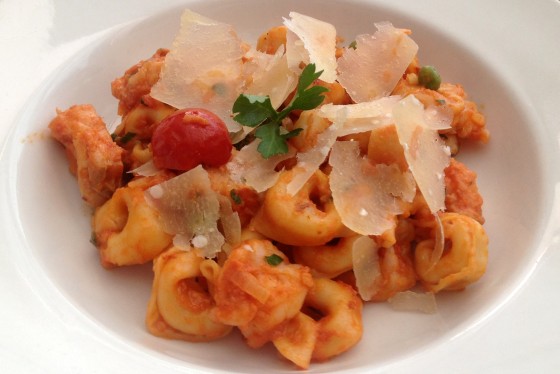 Disclaimer: This is not a sponsored post and while BoyEatsWorld received pasta courtesy of Barilla all the other ingredients were purchased under instruction of Chef Raffles!

11 Comments on Kids in the Kitchen – Seafood tortellini