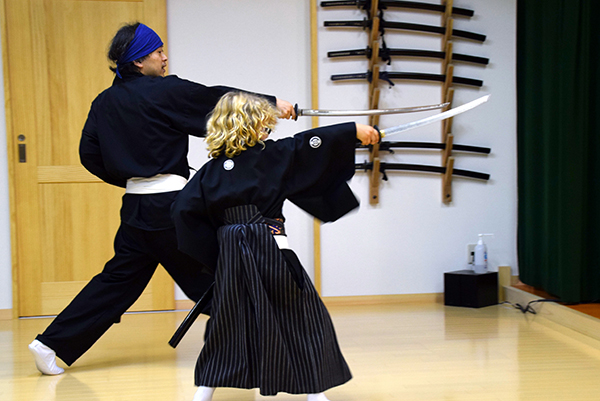 Bushidō! No, it is not slang for cow poo. It is the moral code of the Samurai. You see, Japan’s samurai class wasn’t just some Tyler Durdenless Fight Club with razer-sharp Katanas. In fact, the way of the samurai was more about morality and doing the right thing than it was about biffo.

Today, though Japanese ethics are still based on the spirit of Bushido, I’m happy to report that they’ve swapped their horses for the faster and infinitely more comfortable Shinkansen bullet train that we board for Kyoto.

We’re off to Kyoto on a warrior hunt. And by we I mean Raffles. I’m actually here for the temples. Sugarpuff has her eye on the cat cafés, and Mr Eats World is more interested in necking his next Asahi. But these things will have to wait, because my feisty flashing blade has a date with a kembu master.

Kembu is the traditional martial art used by the samurai. The word kembu literally means sword dance and in the Samurai Kembu Theater dojo, a hakama clad Raffles certainly gets his groove on with his katana. In feudal times, the samurais combined swordplay with dance to achieve agility and mental strength. 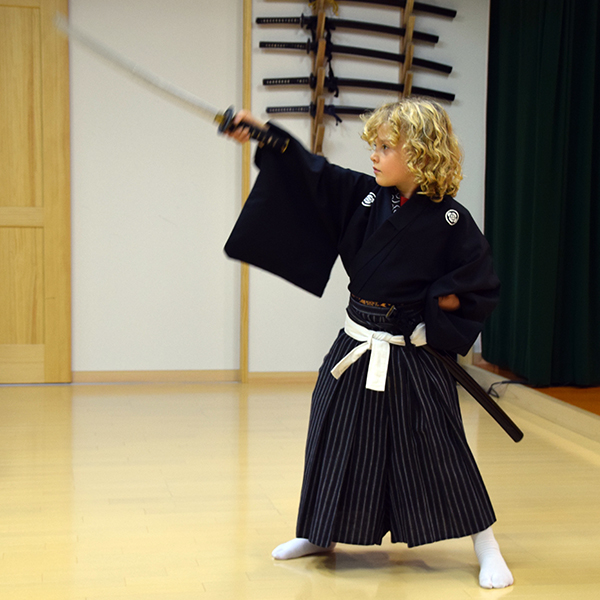 After an hour long lesson in samurai sword skills and etiquette, he has all the decorum and mental agility of a rabid monkey, but Raffles is handling his sword like the star of a Kurosawa movie … at least if there was a Kurosawa movie set in a primary school. 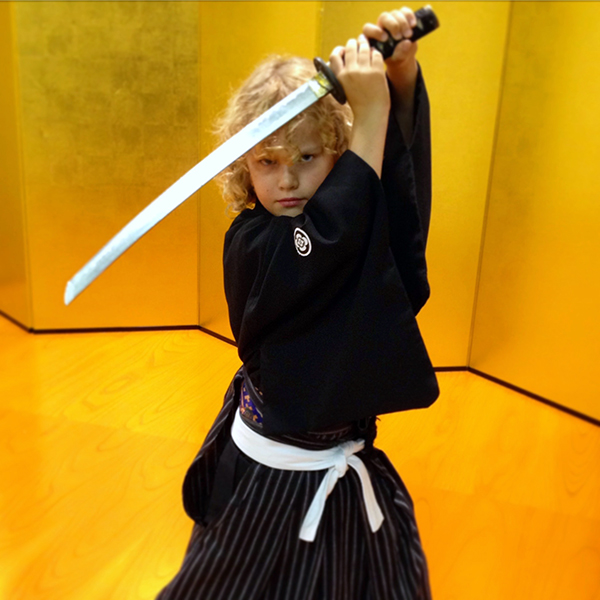 Having worked up a warrior-like appetite, he follows his lesson in swordplay with one in noodles at Menbakaichidai’s hands on Ramen University where, after inhaling a bowl of their famous black ramen, he learns how to make a less combustible version for himself. 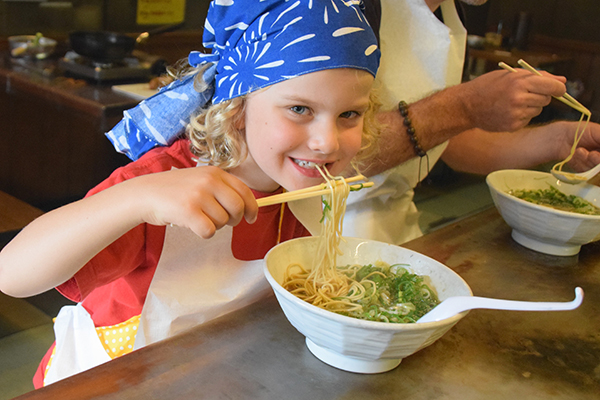 There is so much to do in Kyoto with kids. Especially those kids that are warrior obsessed. Refuelled after our ramen rampage, we head to Toei Kyoto Studio Park, a working TV and movie set famous for its jidaigeki period films. It also doubles as a kinda corny Edo period theme park where random ninjas leap along the roofs and battling samurai burst from doorways and windows in pantomime style. 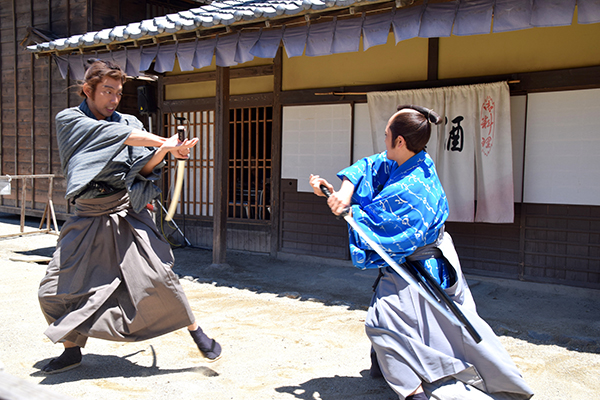 Needless to say, it’s only a matter of moments before my little shogun – never one to shy away from a sword-assisted dust up – joins in and is taking on the bad guys in a live-action skirmish. 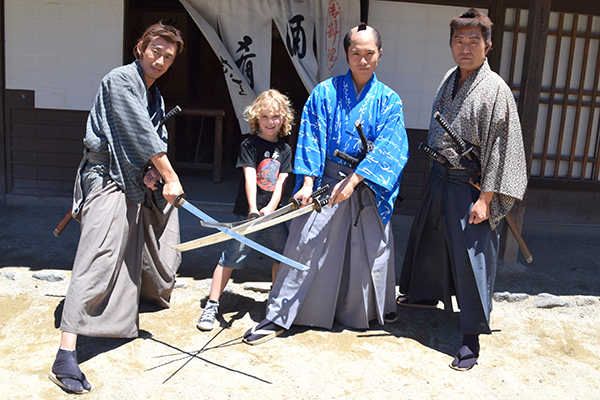 While they use their extensive martial arts training, Raffles defeats them with wanton silliness and they fall to their pantomime deaths from laughter.

After a busy day of warrioring, we return to the tranquility of the elegant Hyatt Regency. Sandwiched between Ancient shrines and the extraordinary Kyoto Museum in the historic Higashiyama Shichijo district, the kids are made feel very welcome in this striking hotel. 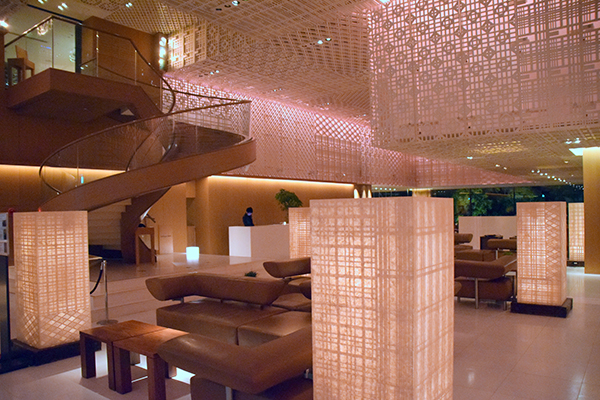 At our decadent digs we are greeted by Mr Yokoyama, the hotel’s indcredibly charming General Manager who, after hearing of Raffles’ newly acquired qualifications, hires him on the spot. Tongue firmly in cheek – he claims to have had his eye out for a pint-sized samurai security guard come ramen chef for quite some time. But then who hasn’t? 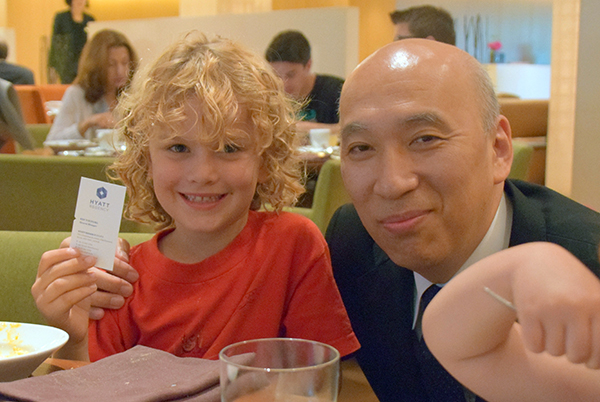 And best of all he promises to pay him in the addictive green tea and yuzu éclairs from the Hyatt Regency’s Pastry boutique. Winning! 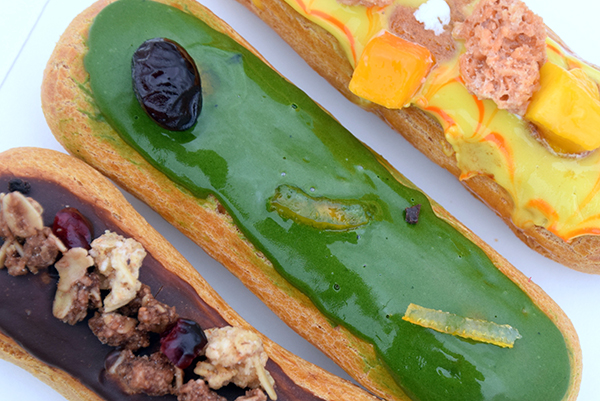 Just when we thought our battle weary warrior was spent, the hotel concierge tells us that he has secured us a reservation at Ninja Kyoto Restaurant and Labyrinth and once more my little loon is on a mission, round housing his way out the door.

I must confess that I’m expecting kitsch and Ninja Kyoto delivers in spades. 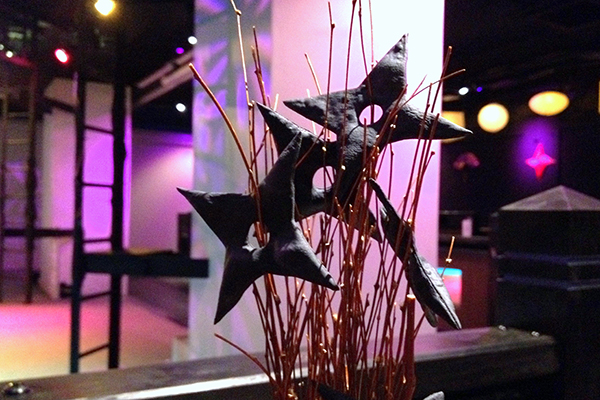 “Real” ninja’s light up explosive escargot bombs and we nibble on edible shuriken until the lights dim and they disappear, as ninja do. 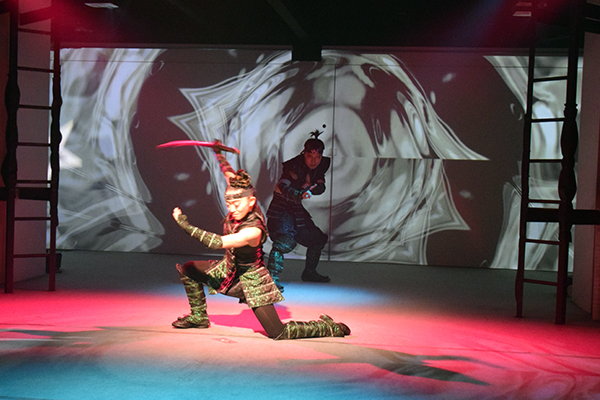 We don’t see them again until they drop from the ceiling in a flurry of noise and smoke for an arse-kicking live-action extravaganza of martial arts, magic, acrobatics, and aerial badassery directed by Tetsuro Shimaguchi, the choreographer of Kill Bill.

After his day as a Samurai in training, our wee warrior has embraced the spirit of bushidō. In fact, he’s full of it. 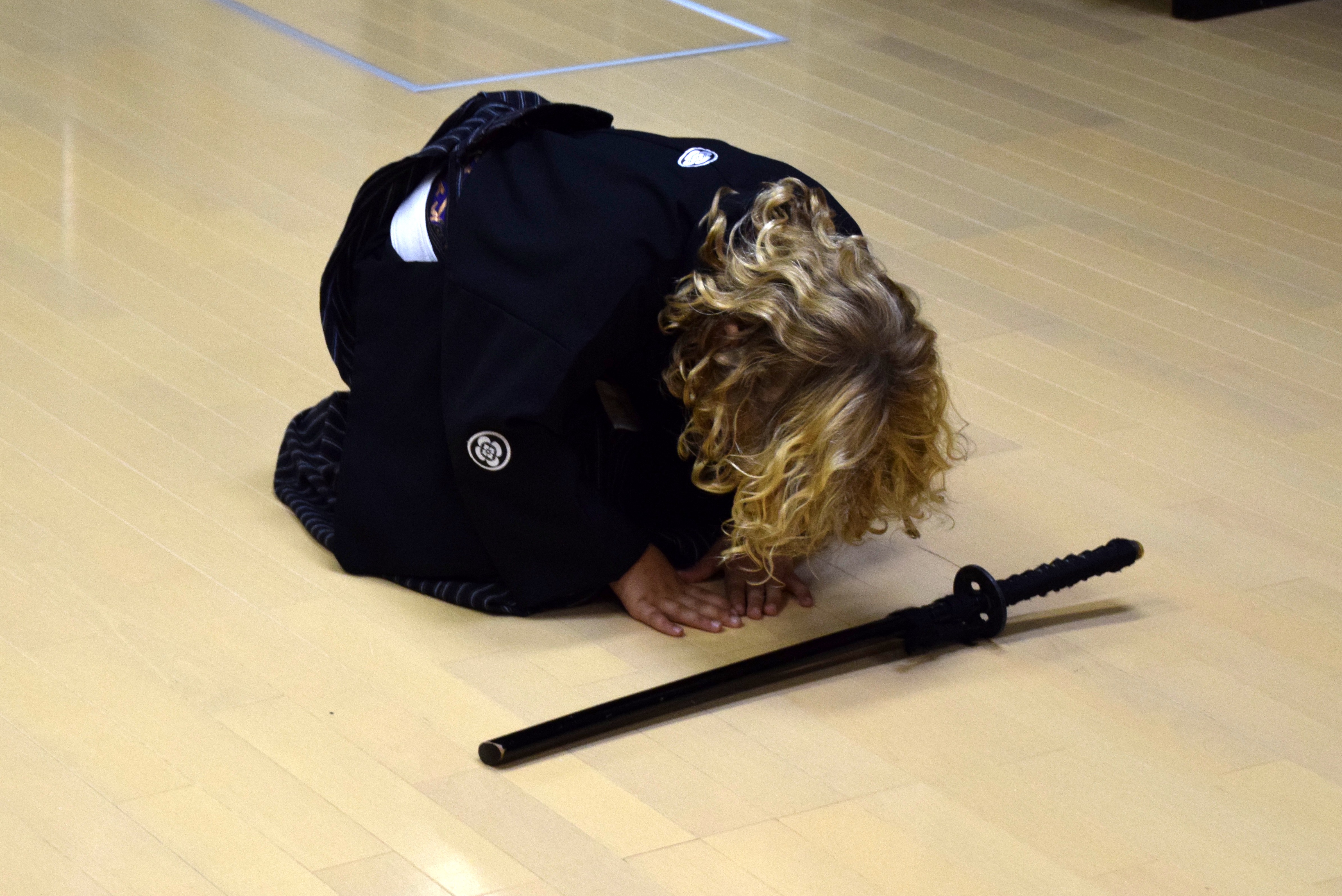