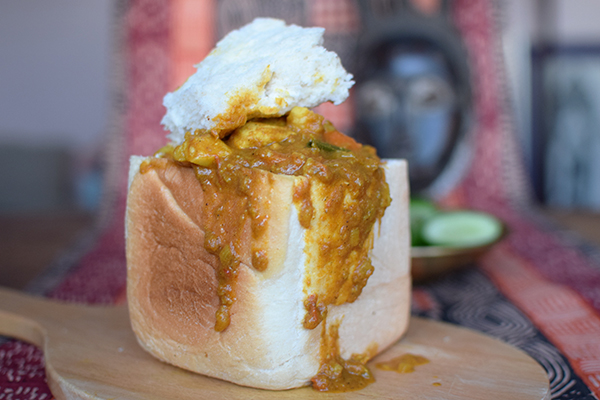 Bunny chow. No, it’s not snack food for rabbits. Nor are the cotton-tailed cuties an ingredient. In fact the popular South African street food has absolutely nothing to do with bunnies of the fluffy kind.

South African Bunny Chow is essentially a half a loaf of white bread with the inside scooped out, stuffed full of curry. It is a dish that first gained popularity in the Durban Indian community, before spreading right across the country, from Cape Town to The Kruger.

In Johannesburg, you’ll find a smaller version of the bread basket meal that uses a smaller chunk of bread filled with all manner of ingredients from hot chips to paloney,  and referred to as a kota (“quarter”).

While its exact origins are debated, some say that Bunny Chow originated originated in the sugar fields of KwaZulu-Natal when Indian workers with no time to make traditional Indian beads, instead used European style bread with their curries. It is then said to have gained popularity during apartheid, when laws prevented both Indian and black South Africans from dining in Durban’s restaurants, and enterprising merchants started serving the budget-friendly, conveniently self-contained meal from their back windows.

The dish is more often than not just referred to as a ‘bunny’, an unusual appellation said to come from the word Bania, the name of the Indian merchant caste who sold them.

While the original ‘bunny’ was a vegetarian curry, these days the still popular dish is also served with chicken, lamb, or mutton and comes in quarter, half, or full loaves, with a leftover chunk of bread plonked on top.

Generally eaten without cutlery, Bunny Chow was designed to be eaten on the go, the bread forming an edible bowl. Diners simply break off chunks of the bread to sop up the spicy fragrant curry within. 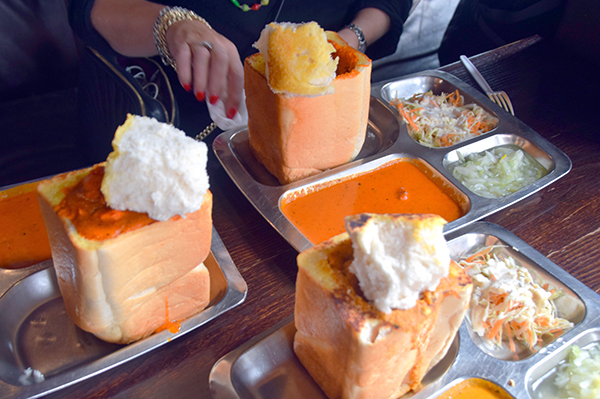 Needless to say when I reported back from my adventures in South Africa to my cutlery avoiding, curry loving son, he became fixated with shoving his face into one of them as soon as possible. And so he proceeded to nag me ten times daily until I came up with a Bunny Chow recipe at home.

It proved such a big hit with everyone that we’ve been enjoying it on high rotation at Casa Eats World ever since…  something this cook isn’t complaining about. Washing up has never been so easy.

Here’s our South African Bunny Chow Recipe for you to enjoy at home. 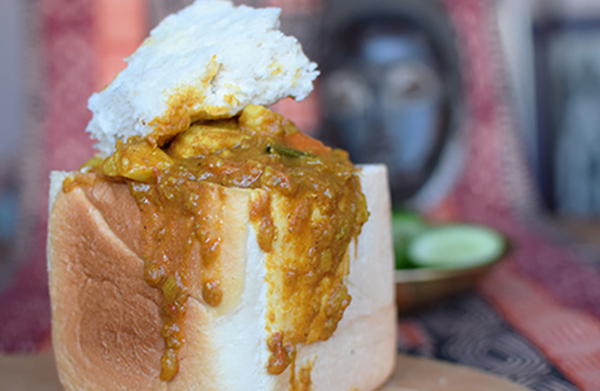