As our jeep pulls quietly to a stop, the dull hum of the engine is replaced by an ominous rumbling sound. The source quickly becomes apparent as we spy two large male lions, just metres from our open vehicle, wrapped around a hefty slab of springbok carcass and each other. Over the next ten minutes the rumbling grows louder and louder, interspersed with the occasional grunt, puff and snarl, as the two lions fight it out for dinner and dominance of the pride. 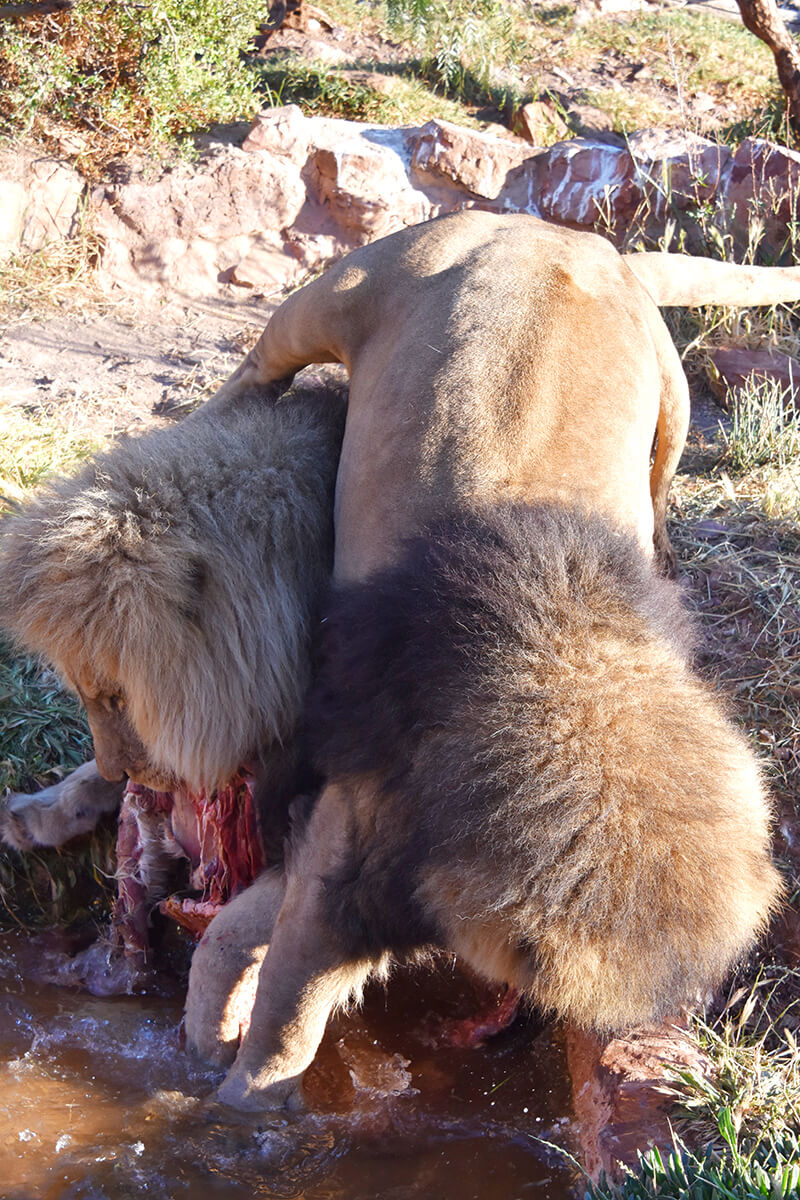 Fighting it out © Aleney de Winter

With a sudden deafening roar the youngest tackles the older lion, his father, before donning his crown and strutting his stuff as the new king of Aquila Private Game Reserve. Or at least its pride of lions. 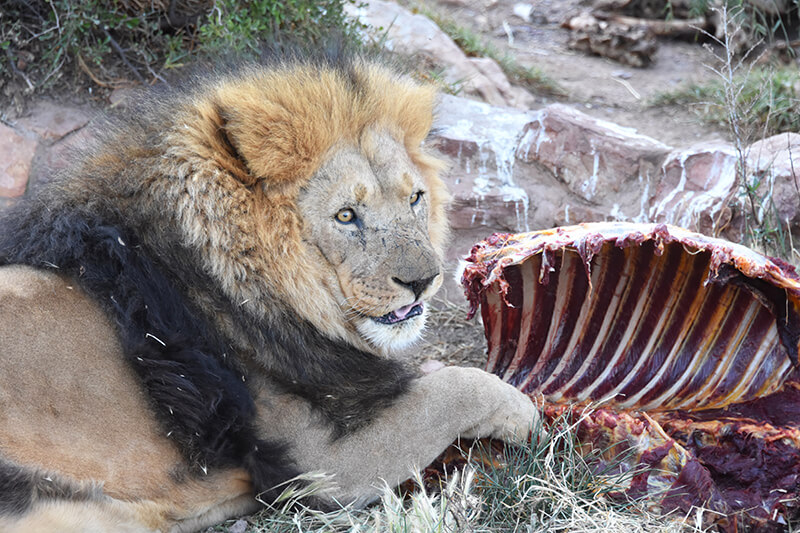 The  kids are seriously awestruck to witness such an epic wildlife moment at such close range, but it’s just one of the eye-popping wildlife experiences Aquila delivers during our visit. 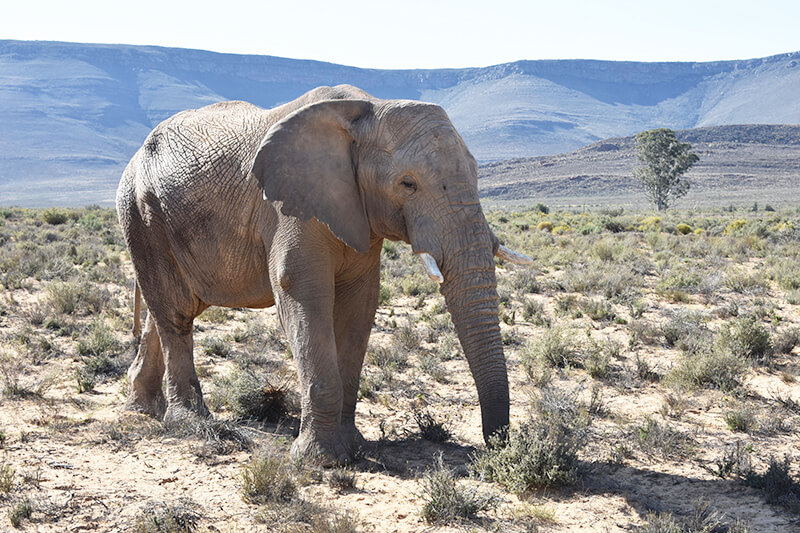 While Aquila doesn’t pack quite as big a wildlife punch as the larger safari lodges in South Africa’s Kruger National Park, its easy access from the many delights of the Mother City, and  malaria-free environment, makes it ideal for young families.

Aquila Private Game Reserve, nestled between the Langeberg and the Outeniqua Mountains, began with one man’s dream to re-introduce the Big 5 – elephant, lion, buffalo, leopard, and rhino – to the Western Cape.

Over the years, the 10,000-hectare conservancy became the adopted home to numerous other rescued animals, who roam freely on the reserve, and that dream evolved to include award-winning community development and conservation programs. The reserve was recently awarded the Skal International Sustainable Tourism Award for its projects and policies that balance tourism, conservation, and the community.

It is conservation, as much as the chance to spot Africa’s unique wildlife – that has brought us here. Sure, the kids’ smiles are enormous as they spot elephant, ostrich, hippo, Cape buffalo, curly horned antelope, springbok and those warring lions. But it is a too-cool crash of rhino that’s becomes the main attraction for my little conservationists in the making.

Under the tutelage of award-winning young wildlife conservationist, Hunter Mitchell, his mentor, Divan Grobler, and Aquila ranger, Memory, the kids enjoy a crash course on all things rhino.  Turns out they’re not just chubby unicorns. 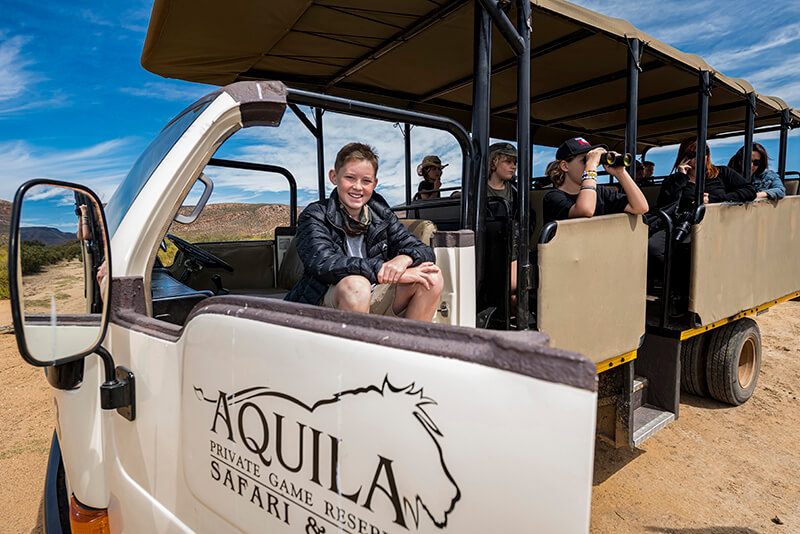 The mega-herbivores consume large amounts of vegetation helping to shape the African landscape. This makes their survival vital to the ecosystem and the other other animals and organisms that live within it.

We also learn about Aquila’s Saving Private Rhino initiative – an anti-poaching and education program, and Hunter’s international award-winning endeavours to protect the rhino, whose numbers have shrunk from more than a million to just 30,000, due to poaching and habitat loss.

It is Hunter and Divan’s passion, and combined knowledge, that sees our kids rewarded with the extraordinary experience of standing just 15 metres from a wild rhino and her calf, with nothing but a few tufts of grass as protection. 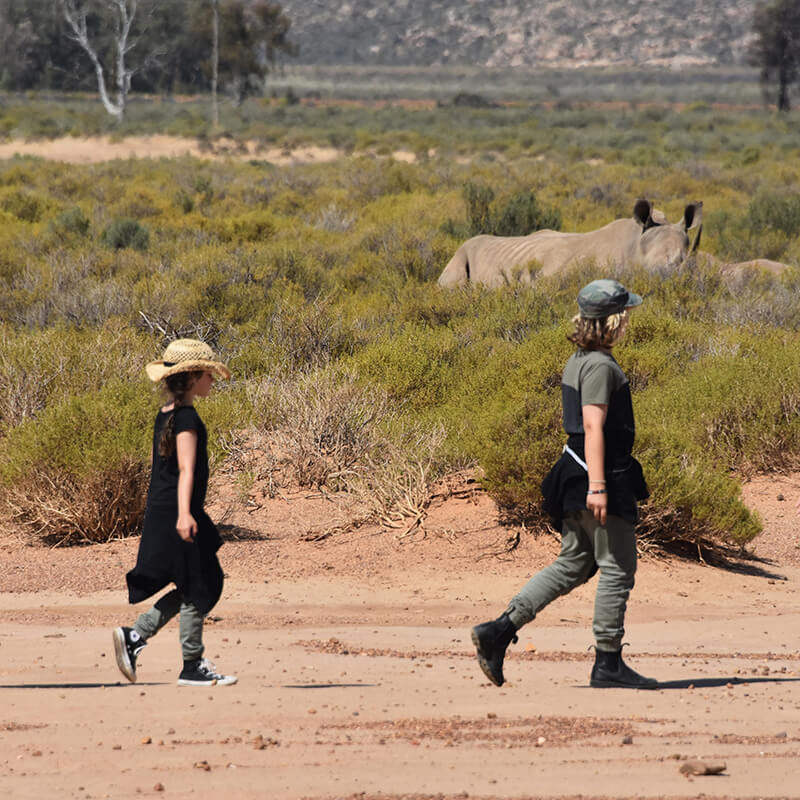 It is a moment they will never forget. Truth be told, neither will I, because I’m absolutely terrified my offspring are about to become rhino shish kebabs.

Heart in mouth and children safely back in jeep, Aquila has more curious surprises in store. As they explore on foot, by jeep and quad bike, my kids fondle dung beetles – another smaller but ecologically important critter – and play a raucous game of rhino poo football with Memory. They are also challenged by Hunter into a hilarious, and slightly nauseating game of “bok-drolletjie– spoeg” (buck poop spitting). 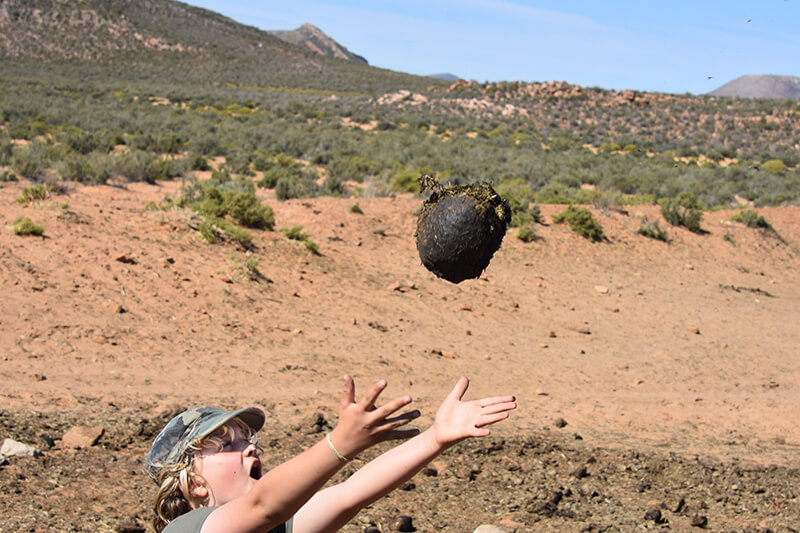 Spitting his dung pellet the furthest, my son is declared the winner, and rewarded with a large gulp of water and extra campfire bread.  Me? I take a hard pass on that particular activity and instead sip on sundowners to a soundtrack of baboon song.

On our return to our lodge, Raff dives into the outdoor swimming pool with his new friends, while I took to the spa for a muscle melting massage and Sugarpuff gets her hair braided, African-style. At the end of the day, we’re all as happy as hippos in mud.

Our adventure ends after a buffet style dinner of South African favourites by the boma (fire pit) where we toast marshmallows and view the thousands of stars in the Karoo night sky. Then its time to retire to our luxurious cottage-style accommodation, complete with an outdoor rock shower and private patio overlooking the reserve. We feel like African royalty!

Just don’t tell our roaring lion friend… we wouldn’t want him to think there was a challenger to his new throne.

Cape Town with a conscience

With the legendary Table Mountain overlooking its urban centre, sparkling harbour and bone white beaches, Cape Town is a truly pretty playground for tourists. But for those families keen to follow the responsible route, here are four other not to be missed experiences we loved.

SANCCOB (the Southern African Foundation for the Conservation of Coastal Birds)  provides a 24/7 rescue service for seabirds and offers visitors the chance to learn about sea bird conservation. The kids even had the chance to adopt an adorable Cape penguin under their care.

The kids were in their happy, green place on a stroll along the Boomslang (tree snake) – a 130-metre long canopy walkway – at Kirstenbosch Botanical Gardens. The low-impact raised walkway provides a window into South Africa’s incredible biodiversity and environmental preservation.

Head in search of the “Tiny 5” at Grootbos Private Nature Reserve, around two hours from Cape Town, where the kids joined entomologists on a safari to learn all about the importance of bugs to the world’s ecosystems.

When to go: The shoulder periods from March to May and September to November boast enviable weather, smaller crowds, and lower prices.

Costs: Accommodation with inclusive meals and two safaris at Aquila Private Game Reserve starts at as little as AU$255 per person, per night.