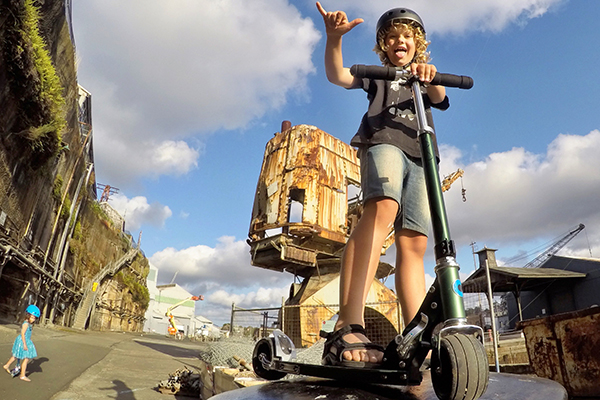 For the best part of two centuries, the only way you could gain access to Sydney’s sensational Cockatoo Island was if you were rocking manacles or brandishing a resume packed with industrial skills. And while it is still shrouded in mystery and history, there are few places in Sydney as perfect to explore as Cockatoo Island with kids

The largest island in Sydney Harbour, Cockatoo Island has a history just as big, the island is one of the city’s most intriguing and architecturally important sites, visiting now is as simple as taking a short ferry ride from Circular Quay or Greenwich to its sparkling location at the junction of the Parramatta and Lane Cove Rivers. 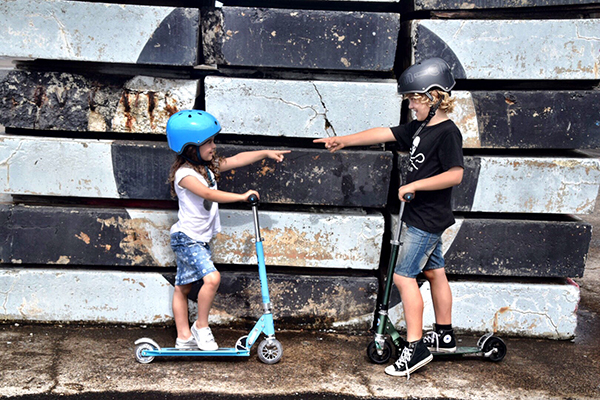 Cockatoo Island is one of the only city-centre campsites in the world and, while we visit frequently, this time we’ve decided to make a weekend of it and snooze under shadow of the island’s rusting cranes.

Camping on Cockatoo Island with kids 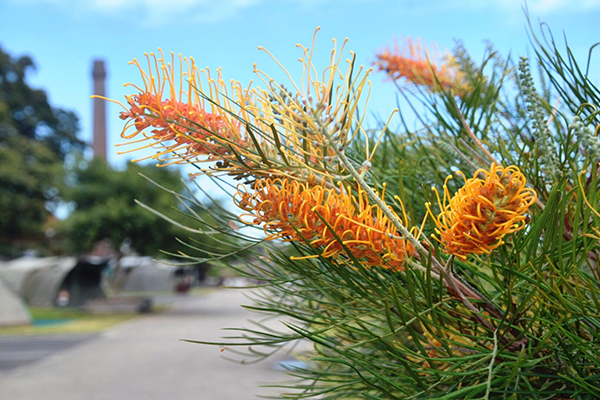 While we visit the island frequently, Cockatoo Island is one of the only city-centre campsites in the world and this time we’ve decided to make a weekend of it and snooze under shadow of the island’s rusting cranes. 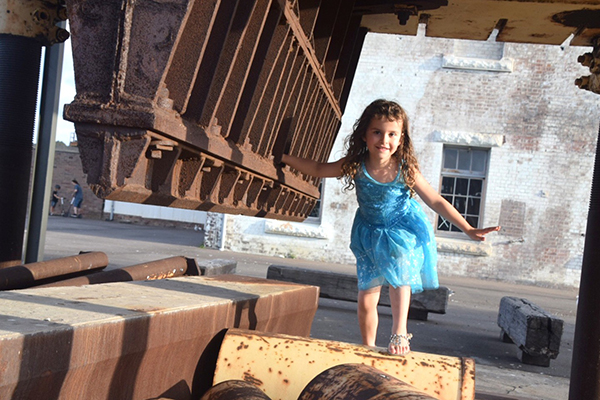 Now I have to admit that while I like the idea of camping, I’m not quite as keen on the reality of lugging all the necessary equipment, assembling a tent, pumping up air mattresses and then building a campfire, whilst juggling the demands of two young kids.

What can I say, other than I’m a lazy cow? But Glamping at Cockatoo Island with kids is a whole different story. It offers the fun of sleeping under canvas only with comfort and convenience. And nowhere does it better than Cockatoo Island.

We expect a tent but are met with what appears to be a canvas Taj Mahal. The enormous two-bedroom Glamping tent is positively palatial and, located directly on the waterfront, comes with million dollar views to match. Inside is a communal area complete with dining table and two, two-person rooms with raised camp beds, linen, quilts and pillows. 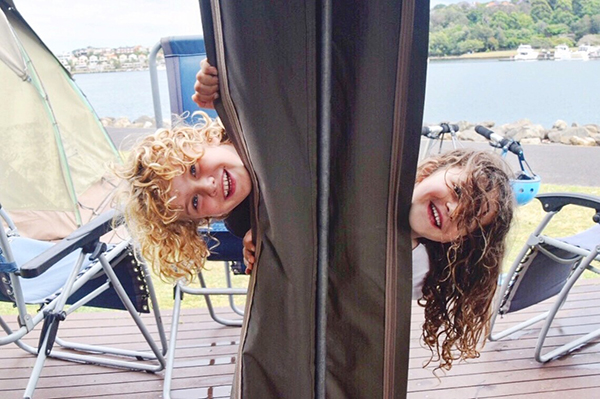 There are even fluffy towels and gorgeous toiletries from Appelles Apothecary for us to use in the clean and modern communal shower block, that’s just a hop, skip and a scoot away.

To take advantage of that glorious view, the tent also has its own covered deck where we can stretch out on our sun lounges and watch life go by on the busy harbour. 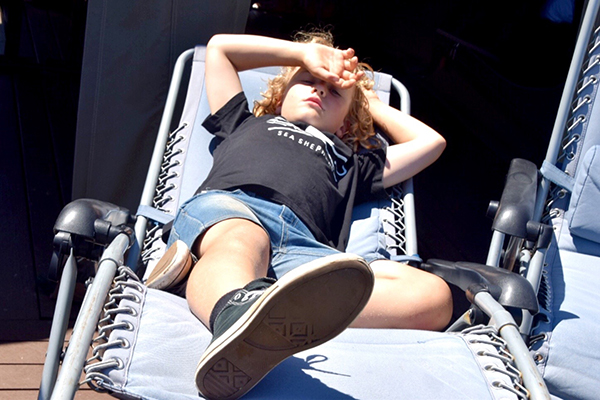 But as there’s only a little daylight left and an abundance of space and plenty of hills and tunnels for the kids to scoot up, down, around and through, we need to get out of the comfy seat and get moving. 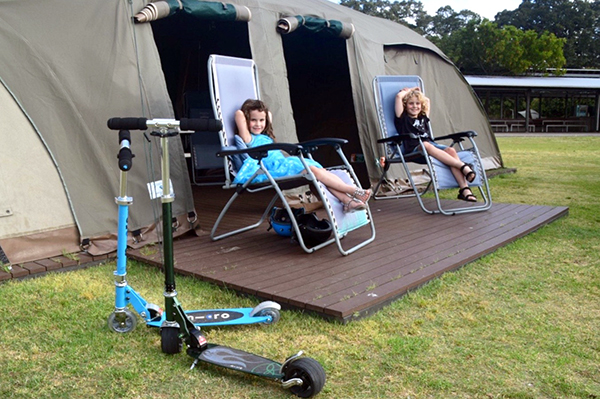 With its huge spaces, hills and island pathways, it is the kids number one scoot spot in Sydney so, though we’re notoriously light packers and veto anything that’s not 100% necessary, it is decided that scooters are a not-negotiable for our little holiday on Cockatoo Island.

As soon as we arrive we unfold Sugarpuff’s Micro Sprite and Raffles’ punky, flame strewn, fat wheeled Micro Rocket (they fold up surprisingly small which makes packing them in the car and toting them on transport a breeze) and they don their matching adjustable Micro helmets. I too have a new scooter of my very own which I’m keen to use, and I’m sure I would love it if  Mr Eats World would let me anywhere near the thing. 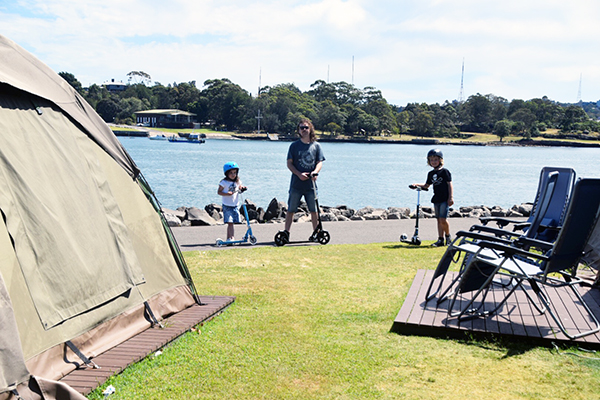 Locked and loaded, we set off along the waterfront to explore. 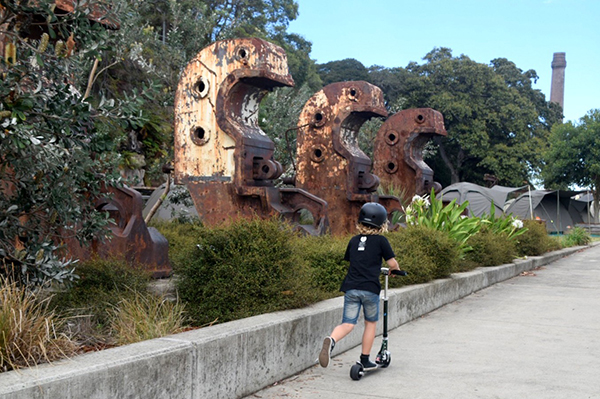 Served as a meeting place for the clans of the Eora people, the traditional owners of the area now known as the Sydney basin, prior to colonisation, Cockatoo Island has strong continued ties to Sydney’s First Nations people.

But the heritage buildings and rusting machinery that dot the island today are a nod to Cockatoos Island’s life, post colonisation, as an imperial prison, industrial school, reformatory and gaol, and the site of one of Australia’s biggest shipyards during the twentieth century. The island has retained many of the remnants of its industrial past with well-preserved, convict-built sandstone buildings, giant cranes, silos and chimneys – earning it a UNESCO World Heritage listing.

In the early 1800’s convicts quarried stone for projects around the colony including their own prison barracks, the granary silos and official residences on the island. 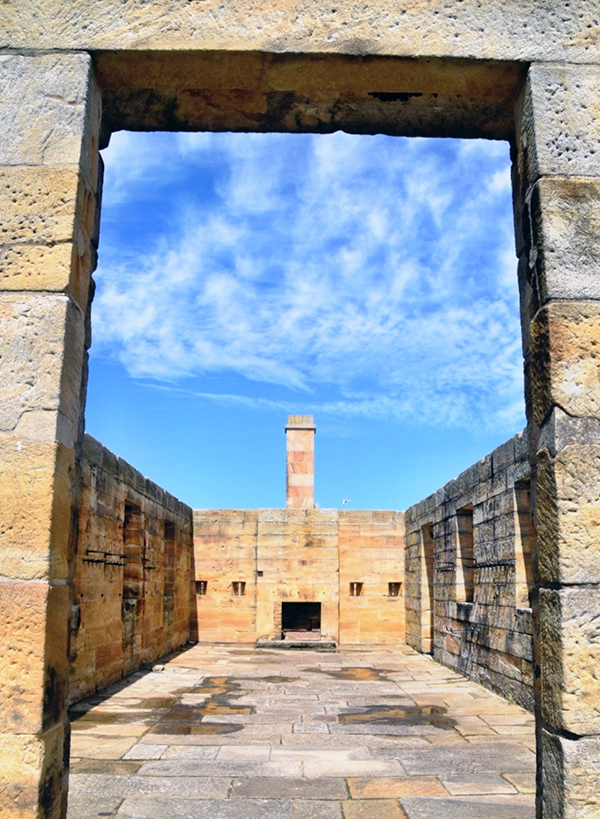 When the prisoners were later transferred to Darlinghurst Gaol, the island became an industrial school and reformatory for girls – and by reformatory read barbaric detention centre where orphaned and neglected girls were housed with petty criminals in horrendous conditions. 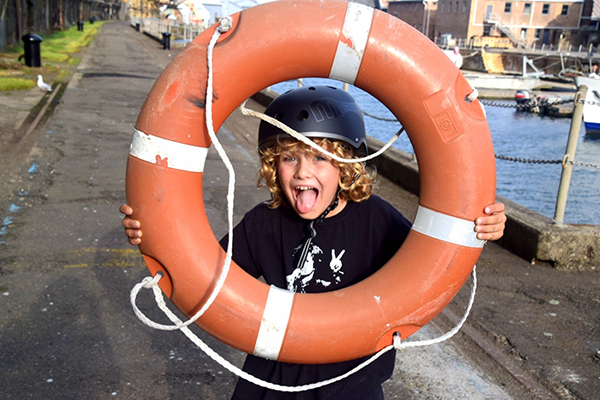 Eventually, the island was taken over by the Royal Navy and converted into a dockyard.

The rusting hulks of the dockyard’s giant cranes and machinery still dot the island.

So much more to explore at Cockatoo Island with kids 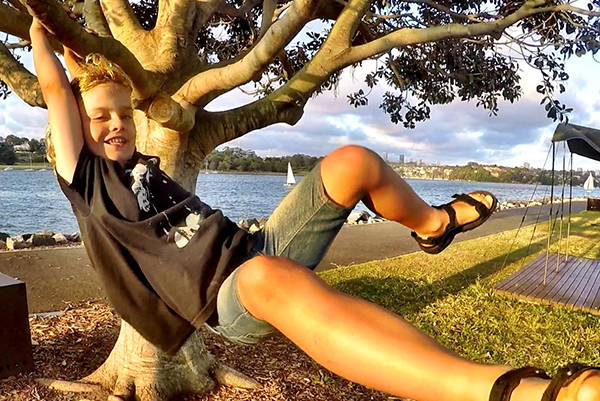 As always the island holds the kids in its thrall as they scoot and explore. The setting sun lending a golden glow to the island and they’re happy faces. And as night starts to fall, the sky takes on a moody hue that only adds to the atmosphere of the island. 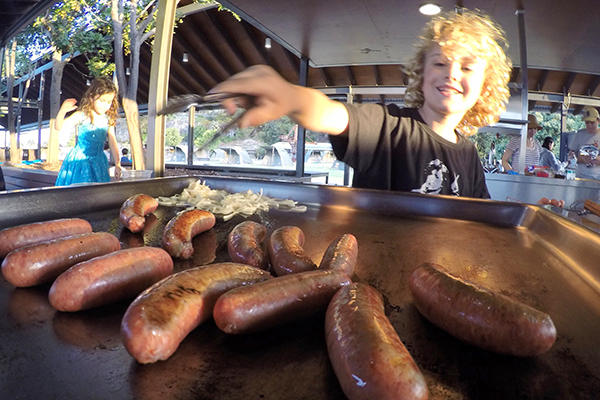 When it’s time for the kids to turn in for the night they’re far too excited to settle. So we head off again in an effort to wear them out for the night.

To know ones great surprise, sugaring them up with roasted marshmallows during a brief pitstop at the island’s communal campfire probably doesn’t help all that much. 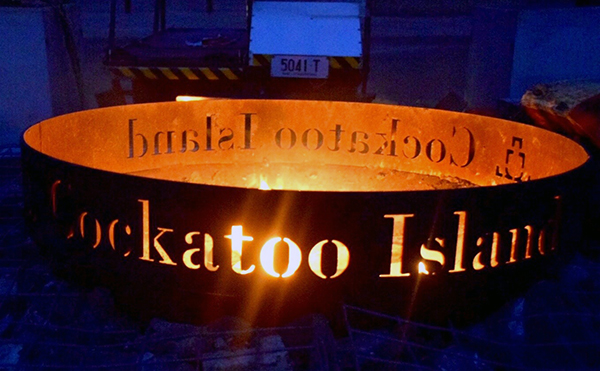 Despite the darkness, Raffles and Sugarpuff insist there is more exploring to be done and they light up their scooters with lanterns to scoot through some of the island’s tunnels. 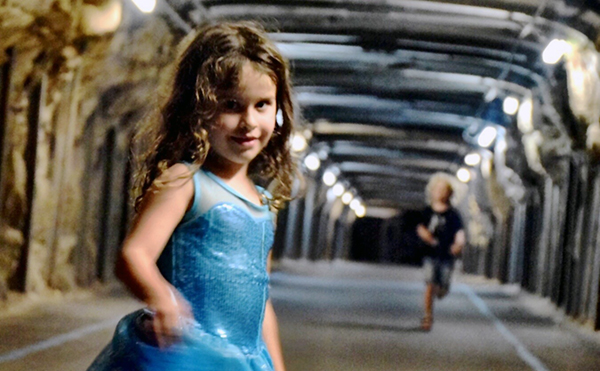 With such a complex past, it’s no surprise that Cockatoo Island is said to be haunted and while it is certainly a tad eerie in the tunnels at night, on this occasion the only spooks we bump into are BYO. 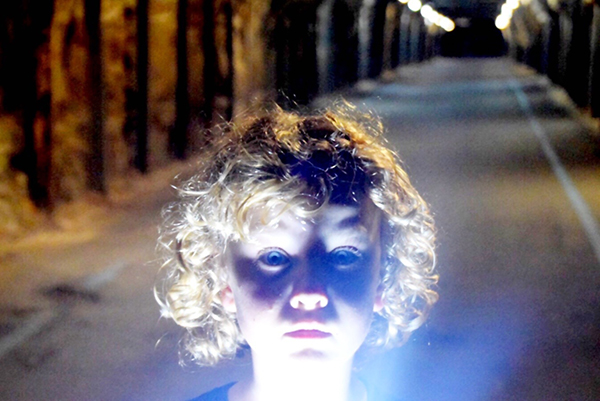 And erring to the overly dramatic…

I admit there are moments when I look over my shoulder… and wonder if I have company of the ghoulish variety. 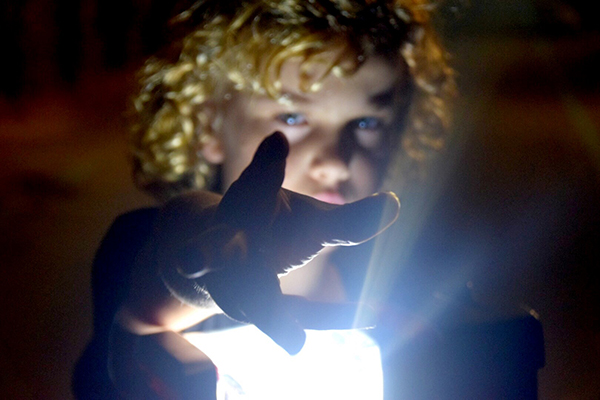 The storm before the calm

When I am woken in the middle of the night by a constant tap, tap, tapping on the wall of our canvas castle, I am not too proud to admit that I practically soil myself and am preparing to speed dial the Ghostbusters when the sky opens and the tapping is joined by the thunderous sound of rain on canvas.

At this point I realise that my spooky visitor is just a storm. And as thunder claps and lightning strikes join the cacophony, I’m less concerned by the fact that there’s only a piece of canvas separating us from the elements than I am relieved by the thought that no self-respecting ghost would be out haunting in this weather. Phew. Comforted that our tent appears to be both ectoplasm and waterproof, I fall back into a happy sleep.

The kids, and Mr Eats World, wake up completely oblivious to mother nature’s midnight temper tantrum and my ghoulish imaginings and we all head to the camp kitchen to feast on the supplied breakfast pack. 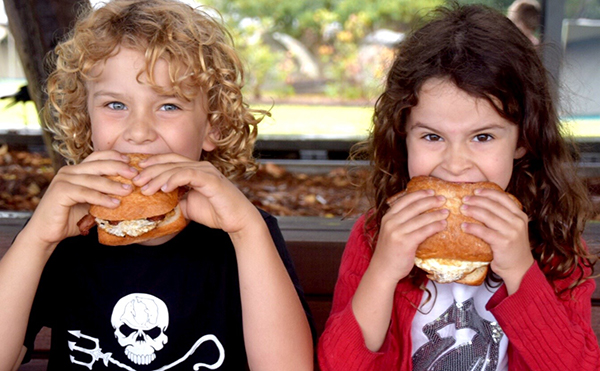 Fuelled up by sausages, bacon and eggs the kids are eager to get back on their scooters for more, so we don our headphones for an audio tour of the island.

One of the great activities on Cockatoo Island with kids is the Convict Clues activity trail and Ships Ahoy discovery trails. As Raffles and Sugarpuff explore the island for clues of the past, they are able to discover what life was like in Cockatoo Island’s notorious convict prison and ooh and ahh over the rusting remnants of the islands shipbuilding past.

At the top of the island  the stunt scooting antics of Raffles and downhill daredevilry of Sugarpuff has me holding my breath! 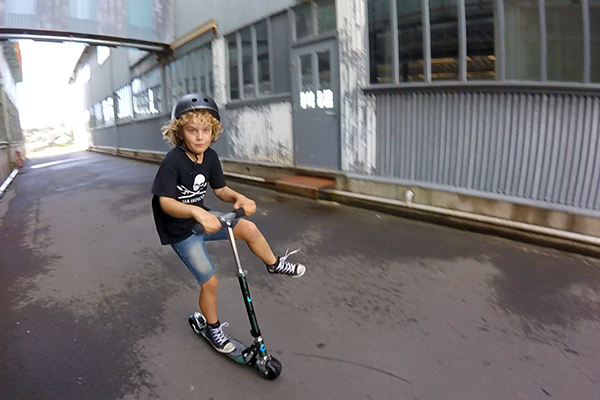 I am much more at ease when my stunt kids slow down to stroll past the pretty Jacaranda trees in bloom and through the remains of the convict buildings.

Raffles and Sugarpuff are particularly intrigued by the old convict precinct and are uncharacteristically quiet as they wander through it and stop to take in the views over the island and harbour. 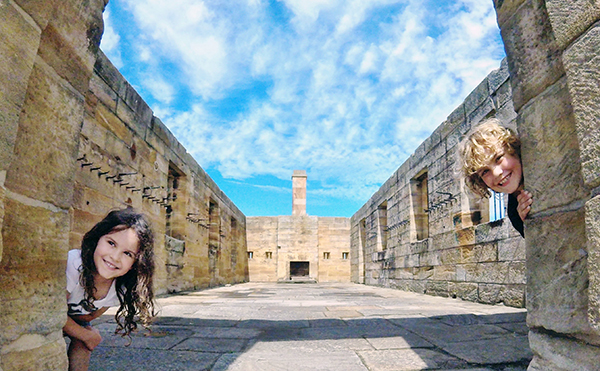 They liven up a little as we head out of the convict quarters and delve further into the cool and curious industrial landscape surrounding it collecting clues along the way. 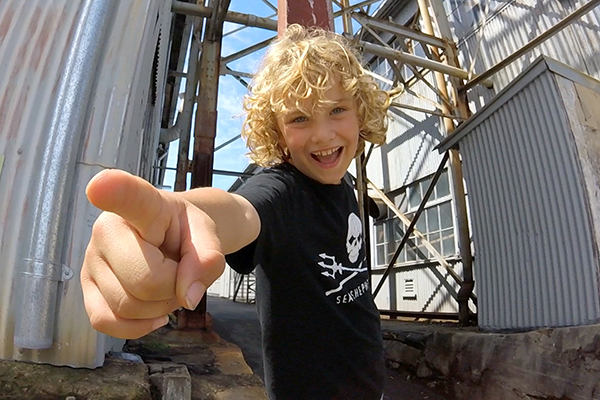 The kids race each other down the windy hill back to the campsite, where we chill out for a while on the sun lounges and enjoy a bite of lunch undercover in our canvas castle’s dining quarter. 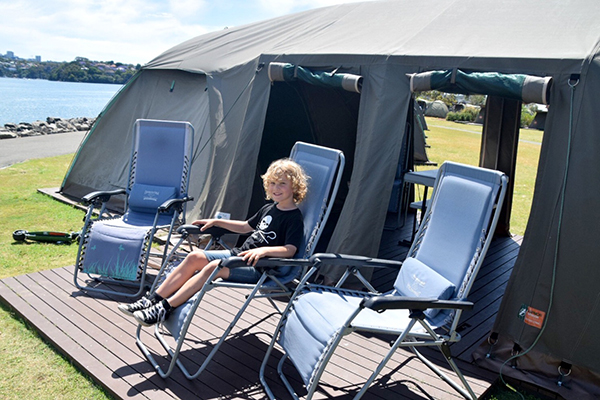 Post lunch, they ride underground through the Dog Leg Tunnel to the old sheds. As always we take extra time in the massive Turbine Shed, the kids favourite. 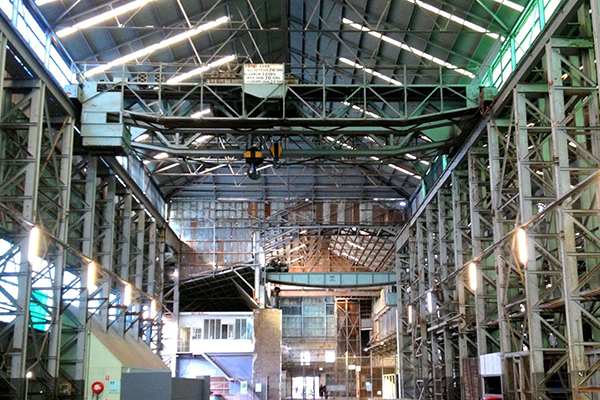 This is mostly due its out of this world lighting which lends such a Death Star vibe that it almost immediately has the kids channelling Luke and Leia.

They scoot with intent around the great expanse of space in front of the sheds until they spy a giant chessboard and decide to stop for a game, though neither appears to have much of a clue how to play. 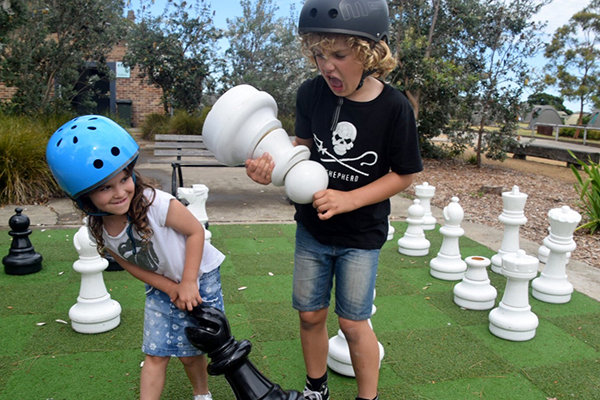 Luckily it is right by a café so Mr Eats World and I grab a bevvy while they take each other on. As the battle progresses it appears to be turning into a death match – either that or they’ve changed the rules of chess since I last played – and as I sip on my tea I can’t help wonder if they’ll take up chess cage fighting next.

Check out Raffles first ever GoPro video with all the highlights of our weekend of camping and carousing below!

Disclosure: We’d like to thank Micro for generously gifting us our fabulous new scooters but all experiences with and opinions of them are our own.