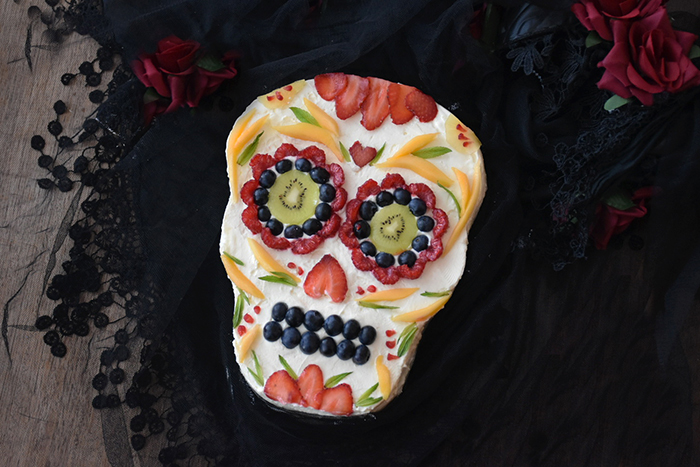 Pavlova is always a good idea. Whether it’s for festive feasting, family gatherings or just because… pavlova, the marvellous meringue is a staple on dessert tables Down Under, and though it appears infrequently on our own, it’s always been a favourite of the kids. With my ooky spooky duo busy conjuring up cobwebs for Halloween, they’ve requested we add a pav again to this year’s freaky Halloween feast. But not just any pavlova, my fruity, fearsome Day of the Dead pavlova.

The kids have always been batty about Halloween, but over the past few years, thanks in no small part to gorgeous animated movies such as ‘Book of Life’ and ‘Coco”, they’ve also developed something of a soft spot for Día de los Muertos (the Day of the Dead). And there’s a lot to love about the centuries old Mexican tradition. It’s believed that the border between the spirit world and the real world dissolves on the Day of the Dead (celebrated each year from October 31- November 2) and families welcome back their late loved ones with a candlelit fiesta of food, flowers and drink.

My culturally curious twosome have read up and researched the celebration – a unique combination of Mesoamerican ritual, European religion and Spanish culture that celebrates the dead, rather than fearing them. And with the utmost respect to Mexican culture, they’ve started to replicate some of its rituals at home. This doesn’t mean just nibbling on sugar skulls, scoffing tacos and burritos, although those will no doubt be on the menu and I have to confess that a celebratory margarita or two may also be involved. But with two much missed souls to celebrate they’ll be setting up a colourful little altar with photos, flowers and ofrendas (offerings) for their grandparents, who they are determined will not be forgotten.

With Halloween and the Day of the Dead falling on the same date, and both celebrations involving costumes, skeletons, graveyards and tasty treats, Sugarpuff’s sweet imagination went into over drive and last year she came up with idea of turning a pavlova into a sugar skull, because there’s not much sugarier than a pavlova. Together we turned her vision into a tasty reality whipping up a crispy white meringue with a fluffy marshmallow soft centre and smothering it in layers of cream and decorative fruit. The result was a smash hit at our annual spook fest and was suitably cooed over before being demolished by our ravenous guests.

Here, we’re sharing our Mexican twist on everyone’s favourite Aussie (or Kiwi if you’re so inclined) dessert, with our recipe for Day of the Dead pavlova.

Top tips for a perfect pavlova

Day of the Dead Pavlova 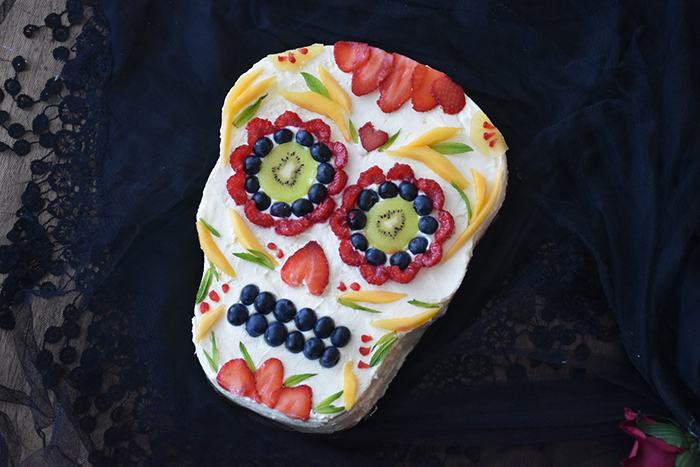