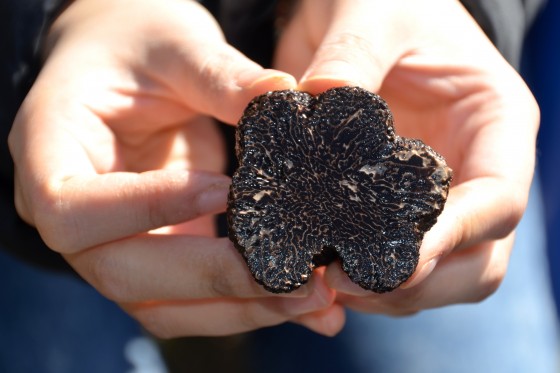 The Eats Worlds have been a tad pre-occupied with a new addition to the family these past few weeks. He’s an adorable wee thing we brought back from Canberra swaddled with great care and that, completely smitten, we fêted and fussed over. 60 grams of bouncing black Perigord Truffle from Terra Preta Truffles that the kids affectionately named Stink, due to the aroma of awesomeness that emanated from his every pore. 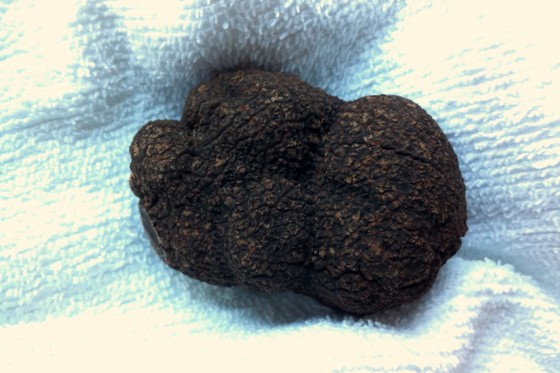 I say emanated as sadly, Stink is no longer with us. You see, being the terrible trufflesitters that we are, we ate him. When Stink first arrived, we were undecided at how such a fine specimen of Trufflehood could best be used so while we planned his delicious demise we popped him in a sealed glass jar full of arborio rice with a dozen of the freshest eggs we could find to keep such a lovely truffle company. Farmer Browns Eggsare from grain-fed pastured chickens who love in a chicken paradise and are tended with much care. Seriously, these happy chickens produce eggs that are so good you can taste the cuddles. While Stink and his new friends got cosy we made a list. We checked it twice and regardless of which were naughty or nice, set about scoffing each and every item we inked.

I gotta say it’s amazing how far a 60 gram truffle will go, even when one isn’t being particularly reserved and is flinging about slices with gay abandon.

Stink’s first offering didn’t even really require our newly purchased truffle-shaver to be called into service, his penetrating scent having infused the luscious eggs that we scrambled for breakfast and piled onto fresh baked sourdough. Even after that first humble dish, our love for the lovely Stink grew. Ready for more truffle action, our dinner that night saw me de-bone a quail. A rather shitty task and something I wouldn’t recommend anyone taking up as a hobby. What I would, however, recommend is taking a de-boned quail and stuffing slices of freshly shaved truffle under its skin, searing it in a hot pan and then roasting it in a moderate oven for about ten minutes before throwing it on a plate with a slice or two of crispy prosciutto and some baby veggies tossed in butter and chopped walnuts. Then gobbling it at speed! 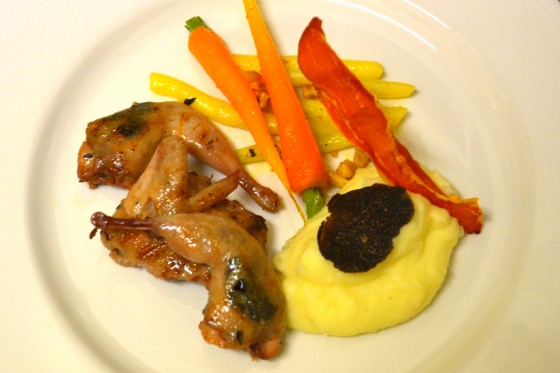 Stink continued to deliver the following morning with more of those truffle-infused eggs, this time poached to perfection by Mr Eats World (who happens to be a world class egg poacher) and served up with fried dry-cured streaky bacon on a potato rosti with baby spinach and some extra freshly shaved truffle. Which is, I must say, a mighty fine way to start the day. 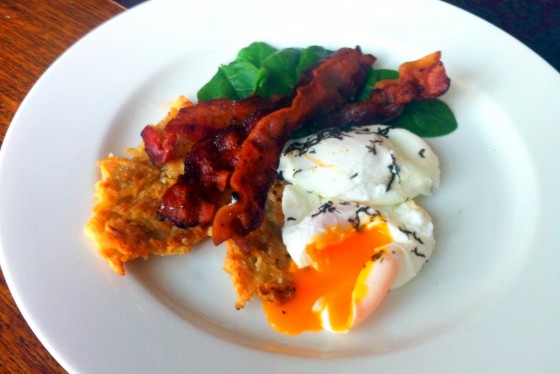 The Eats World Trufflefest continued into the night with a beautiful sirloin steak cooked to medium rare perfection and served with a chunk of home-made truffle butter, a touch of fresh shaved truffle and some beautifully crunchy vegetables. And it was so very good. 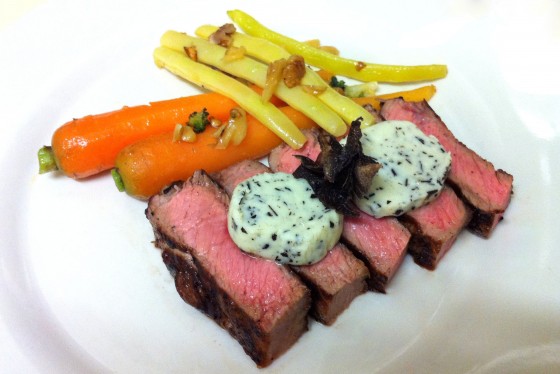 We’d barely touched the sides of our fragrant nugget but we gave Stink some more lovely eggs to keep him company and allowed him a few days of rest as the working week rudely interfered with our truffle consumption. With the new weekend Raffles put in a request for duck so, using the arborio rice that had been Stink’s constant companion since he arrived, I whipped up a beautiful Black Truffle Risotto and served it with tender duck breast, duck liver pate and more of that freshly shaved truffle. And every melting mouthful made our hearts and palates sing. 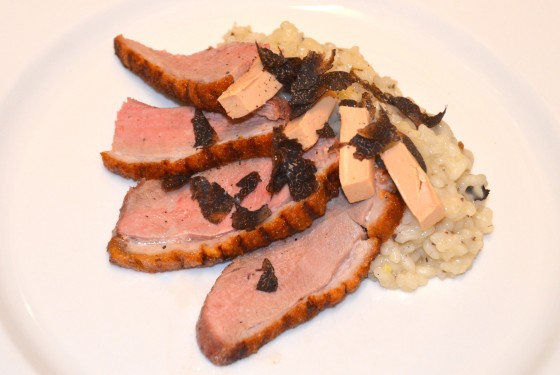 Morning and there were more Stink-infused eggs for breakfast… this time in the form of a truffle and Parmesan omelette. Then a dinner of the best roast chook EVER! 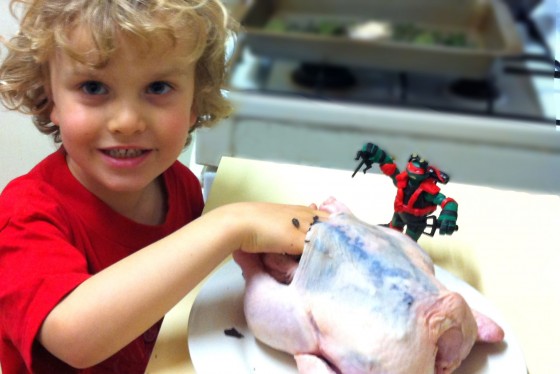 After filling its cavity with a head of garlic, fresh thyme and bay, Raffles and his Ninja Turtle assisted me by stuffing a sheet of truffles under the skin of the cheeky chook. I then gave it a lovely relaxing massage with butter before roasting and serving the crispy skinned, moist and luscious meat with heirloom vegies and the most phenomenal pan-juice gravy I’ve ever tasted. And by tasted I mean drank straight from the gravy boat after batting my children away and stabbing my husband with a fork in my quest for the very last drop. 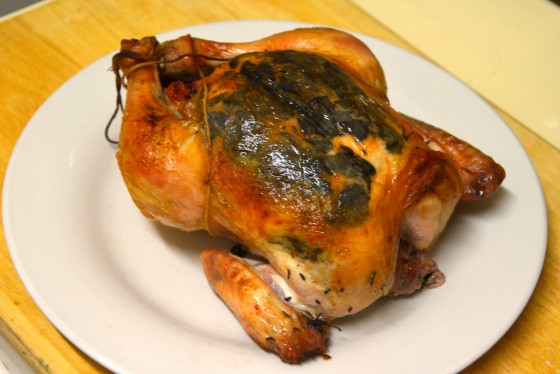 Tonight we’re saying goodbye to what’s left of the lovely Stink with a slight twist on an old Eats World favourite. This soup (adapted from an old Shannon Bennett recipe) is so full of goodness but is so radioactively green Raffles has been known to use it to recreate entire episodes of Teenage Mutant Ninja Turtles between mouthfuls. 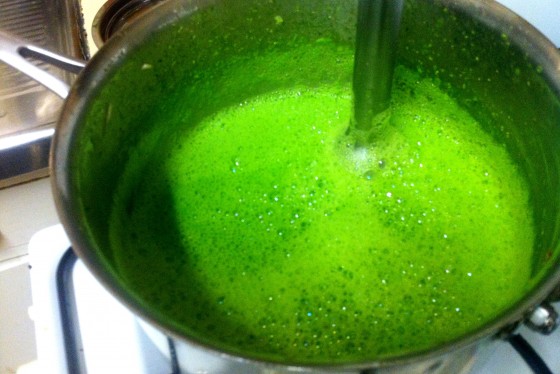 The luscious soup is a silky puree of green peas and spinach that a trio of scallops floats decorously in, each cuddled by crispy prosciutto and that I serve, on this occasion, with freshly shaved black truffle. The earthy aroma of truffle proves a perfect fit with the sweetness of the peas, the delicate flavour of the scallops and the saltiness of the prosciutto. And it is this recipe I’ll share with you now because it is the one where truffles, though an entirely fabulous addition, are also entirely optional. 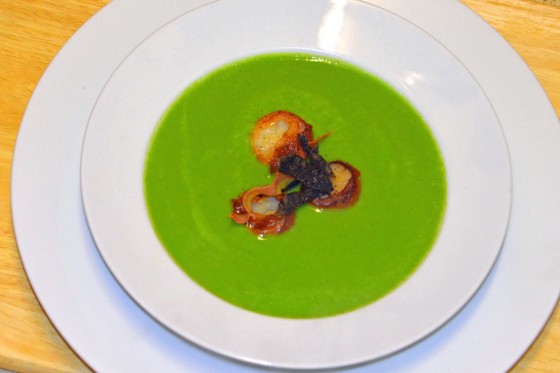 21 Comments on Pea & Spinach Soup with Scallops, Prosciutto and Truffle

Hey,  I’m Aleney! A mum, award-winning travel writer, magazine editor and gallivanting glutton. He’s Raff, the “boy” in boyeatsworld, and a fearless foodie, adventurer and eco-warrior. Along with his all-singing, all-dancing sister, Sugarpuff, we’re exploring the world’s culture and cuisine on a junior food safari.