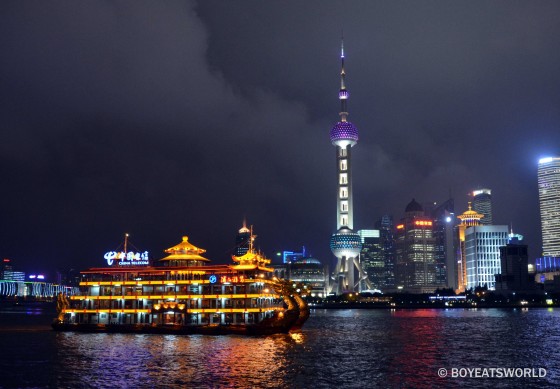 Raffles has just started learning Chinese at school and all that scholarly Ni Hao-ing has brought with it a touch of Mandarin melancholy for a boy who has a bit of a crush on China.

A family break in China last year was more by accident than design, the high flying capital of commerce being the disembarkation port of a cruise on that beautific floating behemoth, Voyager of the Seas.

Museums, markets and more in Shanghai

To be honest we had zero expectations of the city but figured we’d stop a while, scoff a little food, and see what this city of 20 gazillion souls had to offer our little clan. Best known for its tangle of towering skyscrapers and heaving population, we were in for a Shanghai surprise when, after checking in to our accommodation, the first thing we stumble upon is a great expanse of clean, serene, leafy green.

Shanghai’s People’s Square is home to museums, theatres, a petit amusement park full of whirling and twirling rides and lots and lots of space. Perfect for little feet to run, jump and chase a low-flying kite or two, it’s also a great starting place for bigger adventures.

At least it would have been had I not been so distracted by the seductive sparkle of shopping bags. I am drawn by an unseen force to the nearby Ni Hong Children’s Market where I squander roughly thirty bucks on bags and bags of new clothes and plastic toys before hitting Nanjing Road for more cash splashing of the Yuan kind. Nanjing Road is Shanghai’s major shopping artery and positively pulsing with hawkers selling obscurities from lasers to roller skates and people scurrying in and out of the sprawling department stores that make my wallet bleed.

Nanjing Road is also the quickest route to The Bund. Running alongside the west bank of the industrious Huangpu River, the name of which has a puerile Raffles in fits, The Bund is a pretty confusion of architectural styles. It’s a little bit Neo-Classical, a little bit Gothic, a little bit Art Deco and a little bit Rock’n’Roll. Ok, I made that last bit up, but it is wholly gorgeous.  In fact the Bund is so movie-set metropolis dramatic that I half expect a rubber clad Christian Bale to speed by on the Bat Bike.

Instead we content ourselves with watching (in fits of giggles) as the world’s least intimidating police car, the automotive love-child of a dune buggy and a golf cart, hoons by at a rip-roaring 5kph. 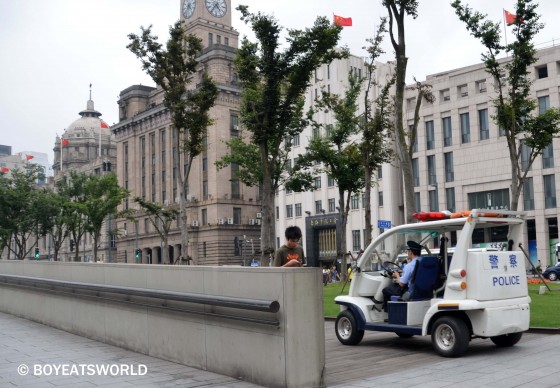 If you think the appeal of The Bund might be lost on young kids, think again. There is plenty to keep the tiny travellers amused, no bull! 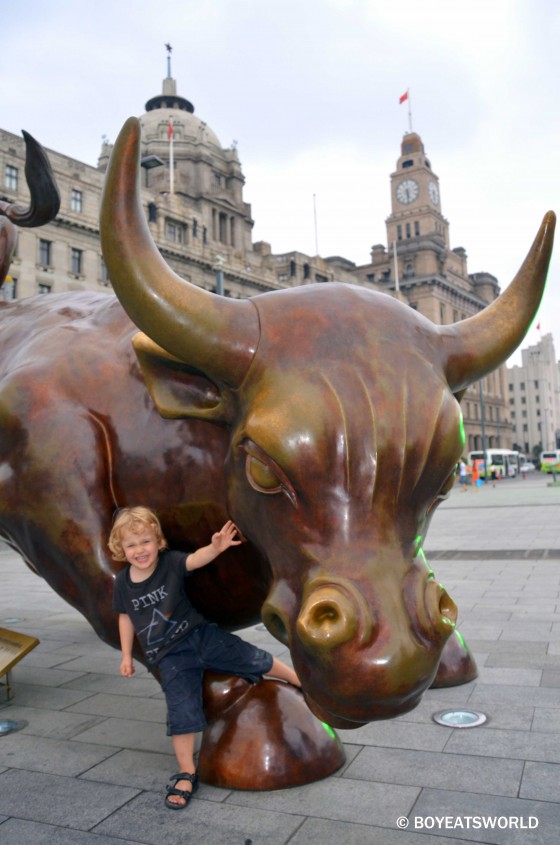 Not least of which is the view of the futuristic skyline of the Pudong’s cloud-bursting space-age towers and skyscrapers that have Raffles’ jaw scraping along the pavement, Neanderthal style. 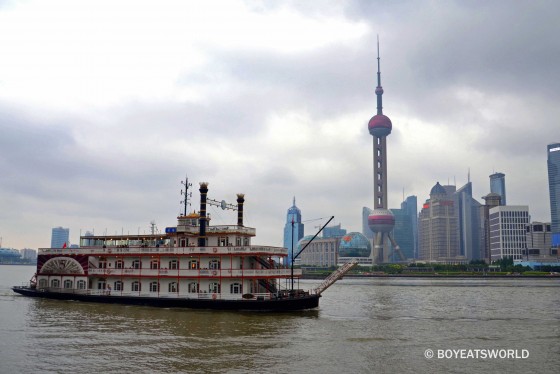 A “giant rocket-ship”, better known as the Oriental Pearl TV Tower, has him particularly enthralled and crossing the Huangpu to climb it immediately become Raffles raison d’etre. But given our inability to walk on water we have to find a way to get there first.

Enter the Bund Tourist Tunnel which takes us there in super sci-fi style. 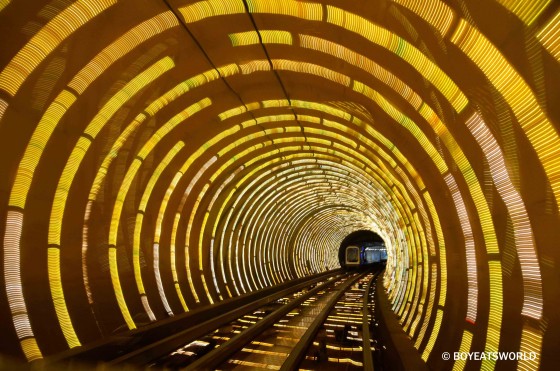 So groovy is our journey in a peculiar space age pod through a trippy underwater tunnel of freaky light effects that I begin to wonder whether my ultra-conservative parents weren’t actually out of their trees on LSD when I was conceived, because without ever having done it myself, I swear I’m having some kind of acid flashback. 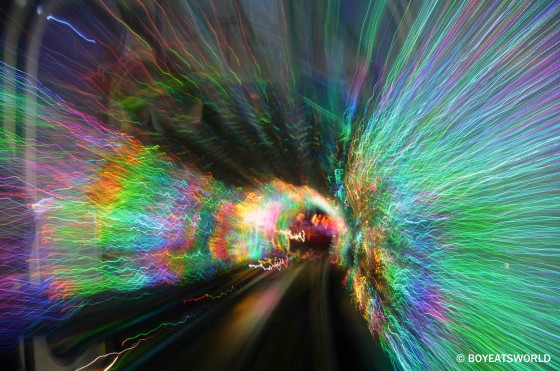 My little trippers too are enamoured with the psychedelic ride making us go back and do it over again before we’re finally granted permission to alight in the Pudong district at the base of Raffles“rocketship”.

The contrast between the old of The Bund and the shiny new of Pudong couldn’t be more extreme. 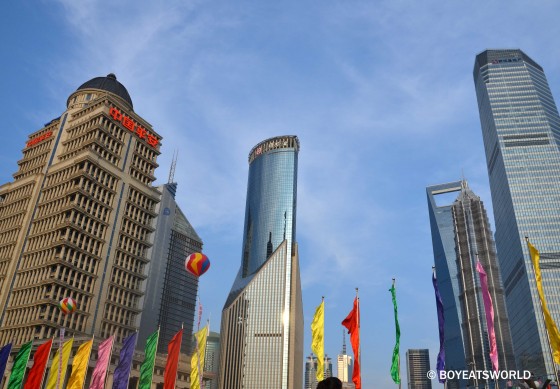 We stroll past gardens of giant green dragons. 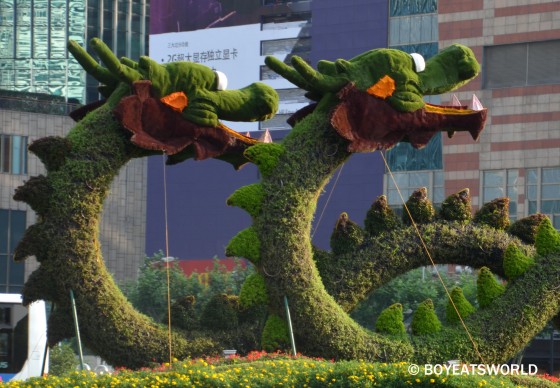 Until we reach the lift to the 350-metre tower where Raffles bursts into tears, insisting on climbing up the outside. We point out that the logistics of this may prove impractical, given he is not an insect and that the whole crashing to a grizzly death thing might put a bit of a downer on our holiday. He in turn rolls his eyes and insists that we can just put super sticky glue on his hands and feet. “It’s easy guys, Spiderman does it all the time!” 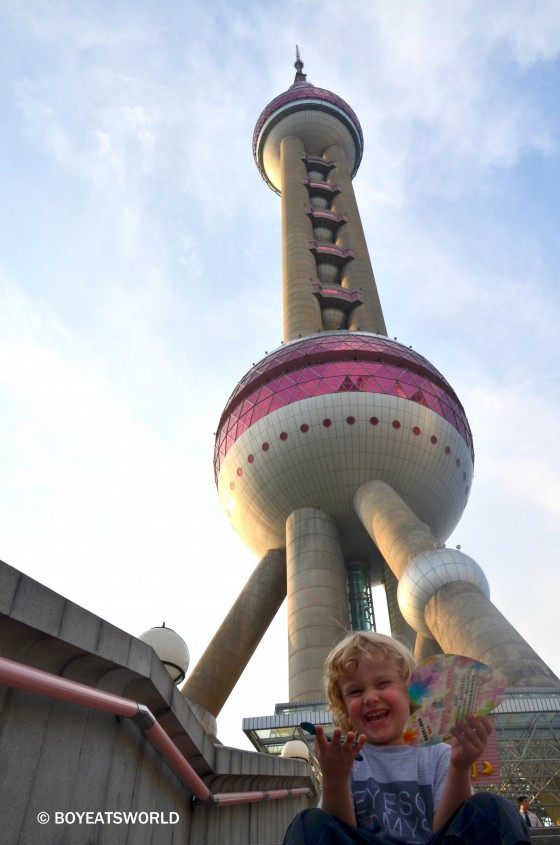 We’re all out of super sticky glue so sulkiness ensues when we opt for the more mundane lift that zooms us to the observation deck without need of arachnid superpowers. To see the sheer massive scale of Shanghai as it stretches out in every direction from the tower makes us feel very tiny indeed. 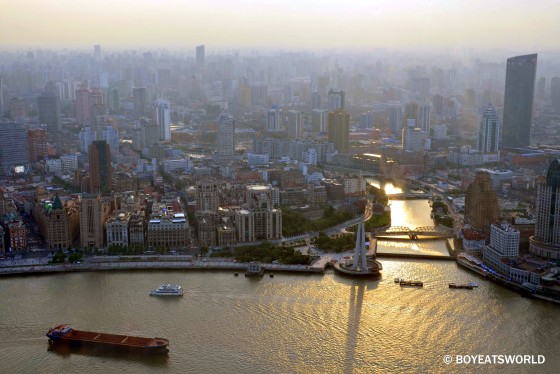 While Raffles makes new friends, Sugarpuff gives her mother a heart attack by casually laying against the glass for a better look. The sight of my baby with nothing but glass between her and a 300 odd metre fall to earth makes me throw up a little in my mouth. It’s inches thick and perfectly safe but I did not need to see that! 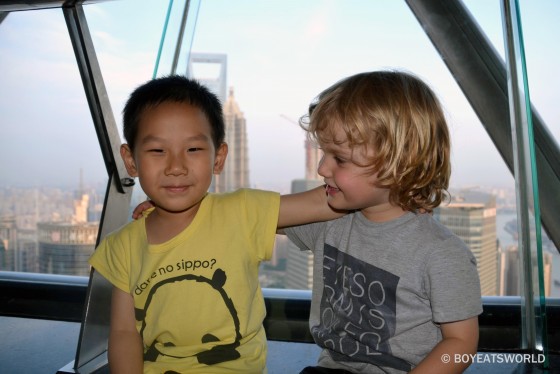 If you have a head for heights, Jin Mao Tower, is even taller at a staggering 420 metres. 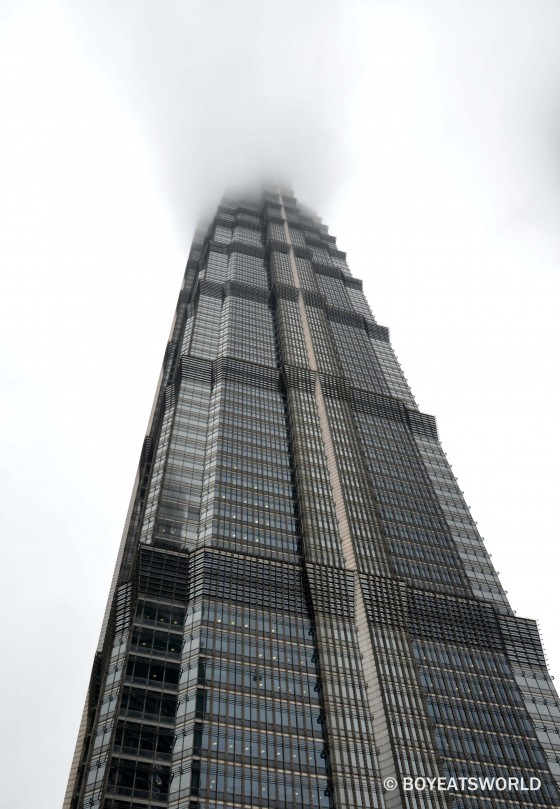 So tall that its summit has disappeared into the clouds, Raffles is convinced it’s a concrete “Jack’s beanstalk” and wary of angry giants elects to stay at sea-level and head back across the river for dinner. We stroll along the foreshore to get a different aspect of The Bund. 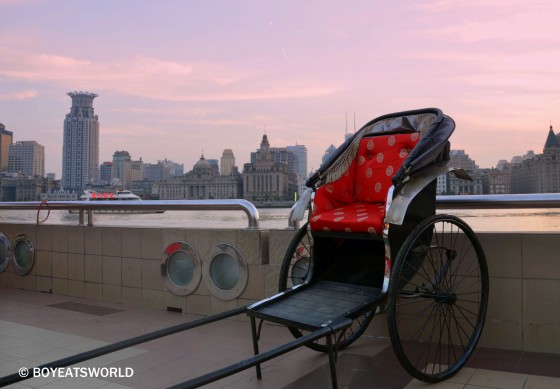 Stumbling across a rock band busking on a busy street corner, doing their very loud thing, is an unexpected surprise. But the crowd that forms is not for the slightly miffed band, instead it’s Raffles that has the audience riveted. I guess the Shanghainese aren’t used to small blonde boys busting out acrobatic ninja dance moves in public. 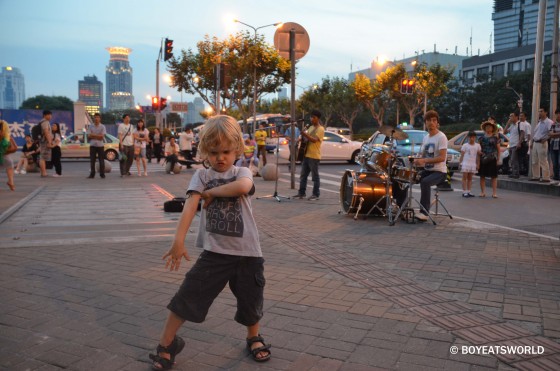 Then again, not many people are. But we’re desensitised to his lunacy and barely notice him rocking out with the band until we spot a paparazzi pack of locals with their iPhones pointed directly at my boy. Shy and retiring are not words one would use to describe my son. 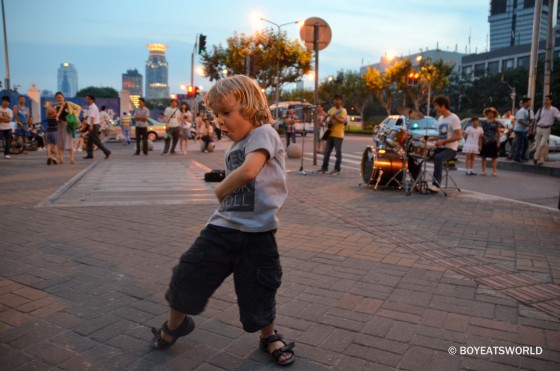 Back at the Bund a neon glow has enveloped the city as the landmarks on both banks illuminate. 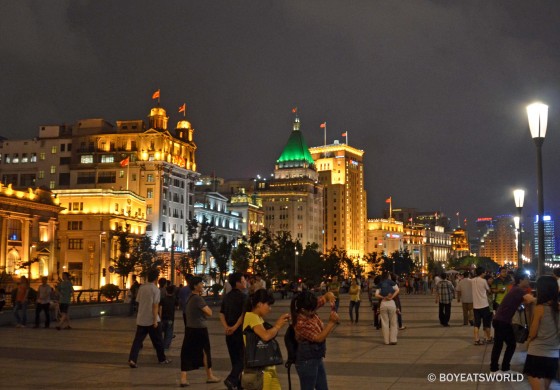 As we look east from the promenade and across the river at a high density wall of flashing light and then back to the soft golden glow of buildings from a more refined era, it’s like being in two different cities at once. And it is very, very cool. 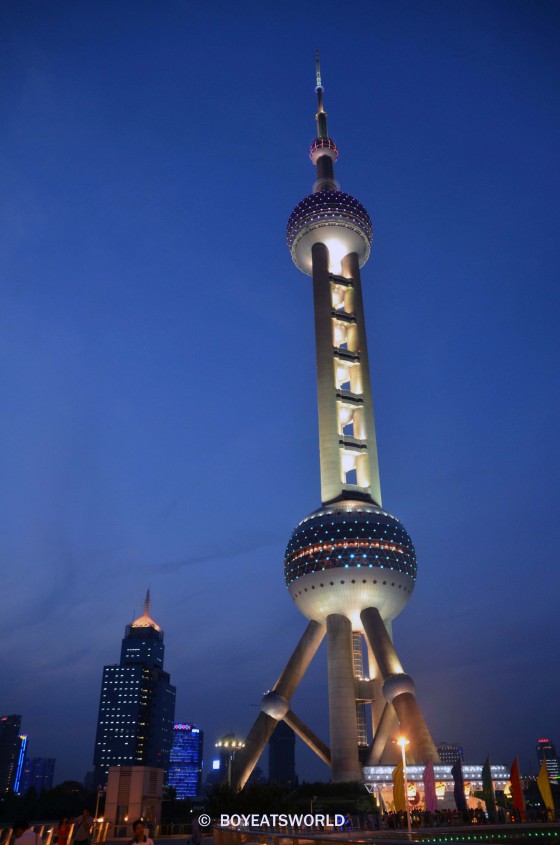 It is here that we also discover what it’s like to be Brad and Angelina (without the bank balance or ridiculous good looks). With their light hair, bouncy curls and big blue eyes, our little tourists become the attraction and a queue forms for a cuddle and a snap.

At first we find the “paps” a little overwhelming but the intent is sweet and the kids take their superstar status in stride, Raffles keeping his fans happy with a smile and a “ni hao” (hello) while Sugarpuff, lapping up the love, just waves to the adoring crowds like she’s a member of the British monarchy.

We head down a now neon-lit Nanjing Road to escape the fan club. 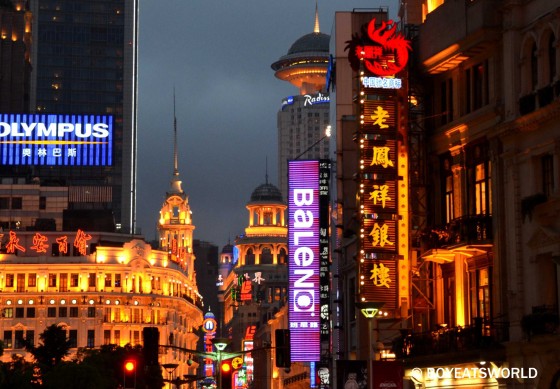 And duck into one of the many eateries ready for dinner where once again the fans descend and our youngest is kidnapped by cuddle crazy locals for the duration of our meal. Surreal. 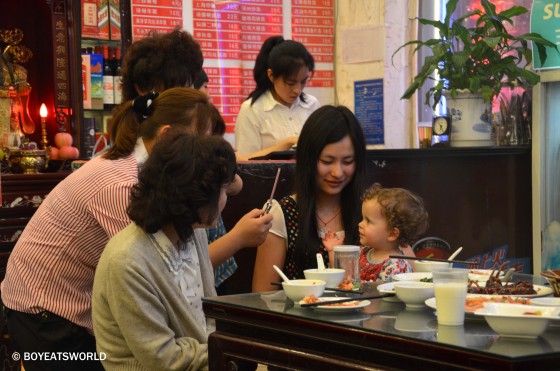 Looking for even more to see and do in China? Check out to Guangzhou with kids.

The 25 best things to do in Guangzhou with kids

22 Comments on The best of Shanghai with kids