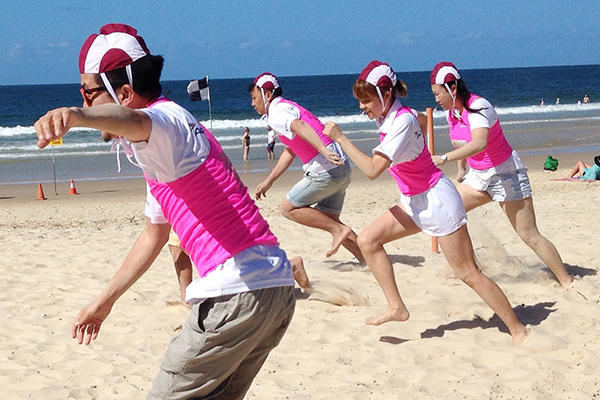 From sizzling Singapore to the Sunshine State! #Escapers15 has seen all nine teams from around Asia Pacific Scoot in to Queensland in absolute style to continue our amazing race for the social media set. The overnight flight in Scoot’s ScootinSilence quiet zone not only meant loads of extra legroom but a blissfully peaceful flight, so we’re all pretty well rested and excited about the first of our three days of #escapers15 Queensland challenges.

Now you may think Team Australia has a bit of a home ground advantage but I’ve gotta tell you… I’m more familiar with Singapore than I am with Brisbane, a city I haven’t visited in more than 20 years, or the Gold Coast, a city I’ve visited only to attend a conference where I barely had time to leave the hotel. 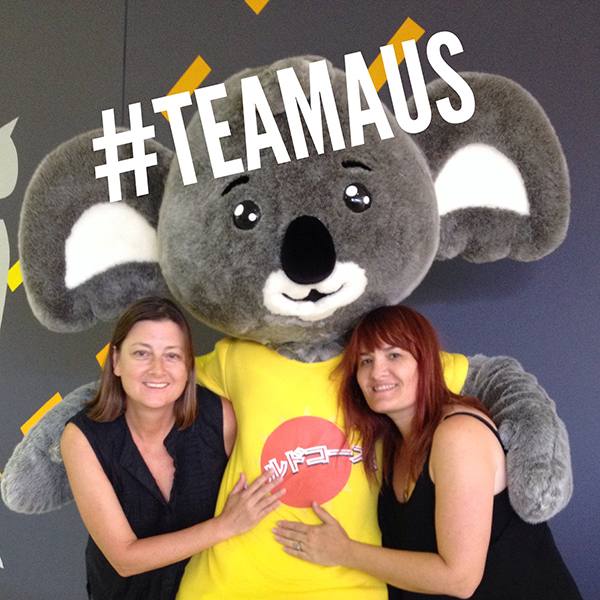 In actual fact, given that so many of our challenges this time around appear to be based on the art of the selfie, it could be said that the camera-shy Australia team may even be starting with a bit of a handicap… but I digress.

In Brisbane we’re met by Blair from Brisbane Greeters who is here to share his inside knowledge with us on a walking tour of the city. 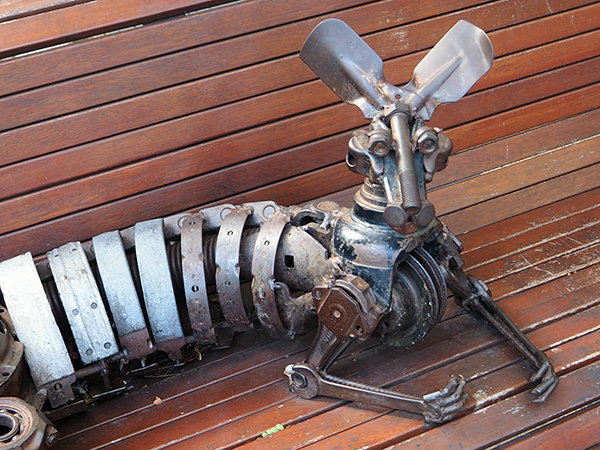 I’m particularly taken with “Gestation” a piece that is beautifully symbolic of the rebirth and evolution of Brisbane. 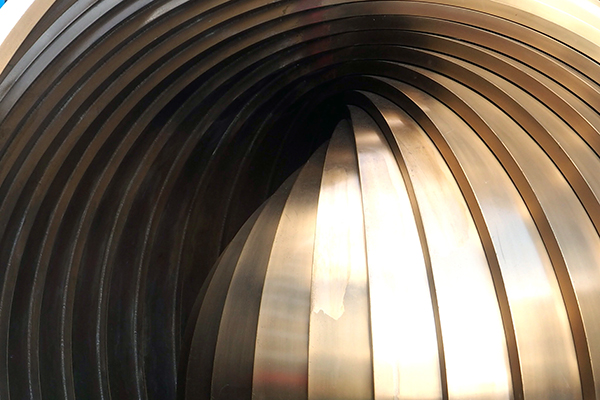 With clues in hand we’re soon unleashed on the unsuspecting city, tasked to find and photograph everything from a bat to a Brissie indie band. Luckily, good kids that we are, we’d ‘used our listening ears” with Blair and quickly tick off all the items on our list in readiness for an incredible lunch at Jimmy’s on the Mall. 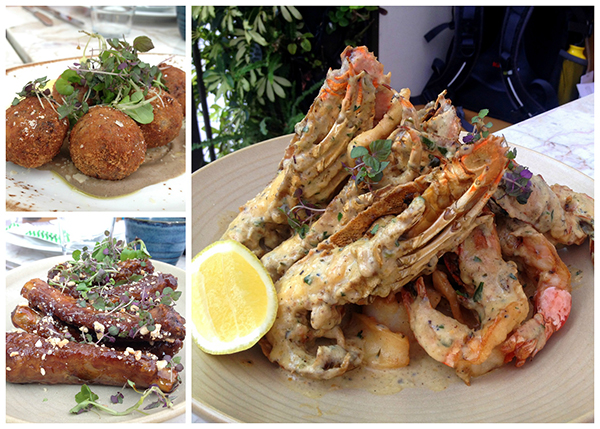 Afterwards, I watch on in sympathy as my acrophobic team mate, Deb of Where to Next Blog is taken off to climb the heights of the Story Bridge while I set off on foot with Blair to uncover a little more of the culture of Australia’s new world city.

Along the way I ooh over amazing street art, aah at the incredible architecture and glorious gardens. 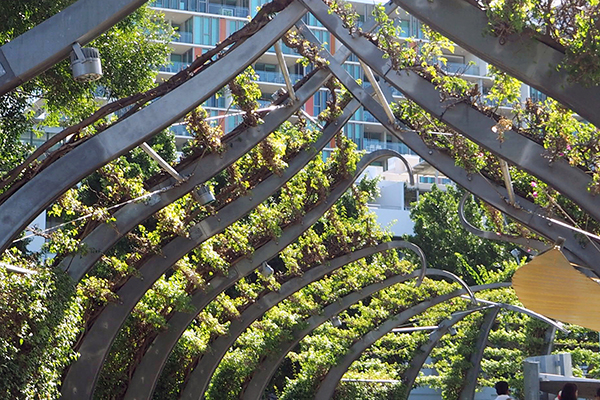 I fall a little in love with the world class GOMA, Queensland’s Gallery of Modern Art 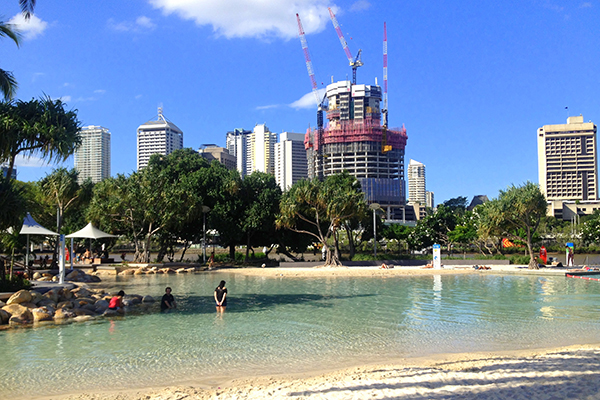 Thanks to the awesome negotiation skills of our charming #escapers15 host we also score a spin on The Wheel of Brisbane – a giant observation wheel that offers us 360 degree views of the city. 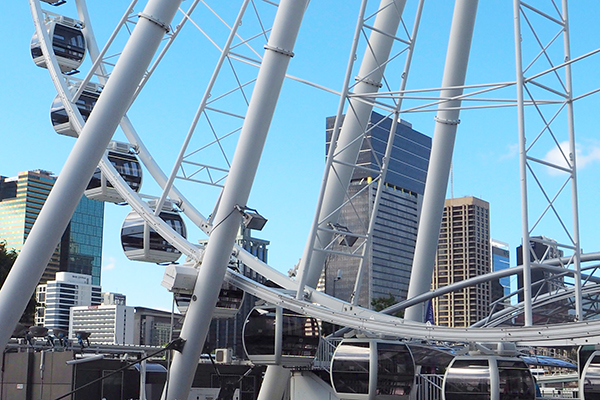 Then our little group is on our bikes with CityCycle, a clever initiative that allows people to borrow and ride a bike all day for free, as long as the bikes are returned within half-hour intervals. We’re one bike short so I elect to stroll, taking my time over the incredibly cool Kurilpa Bridge and its growing collection of love locks on my return to our hotel, the Ibis Brisbane. 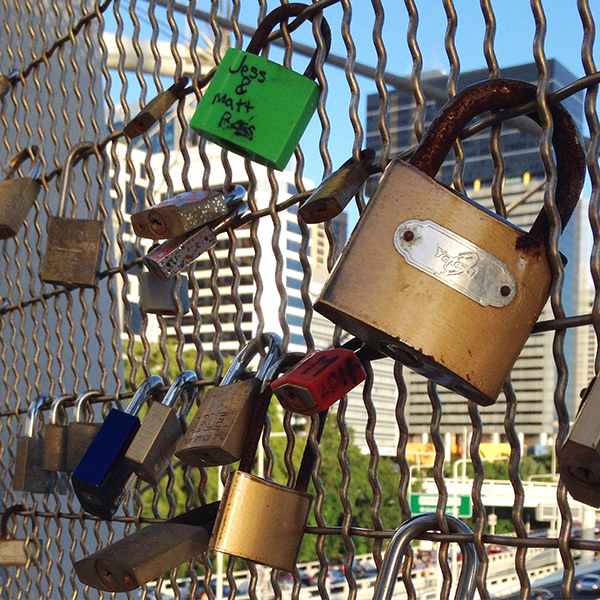 The worlds largest tensegrity bridge, Kulripa Bridge is such an incredible work of art I can’t help but return later in the afternoon when the setting sun creates a magnificent show of light on the abstract bridge. 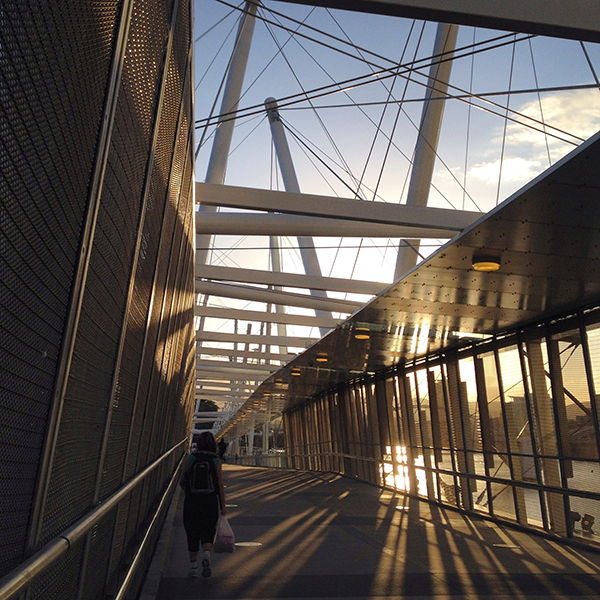 Even our journey to dinner tonight is something special as we all pile onto the open upper deck of The Brisbane Explorer. 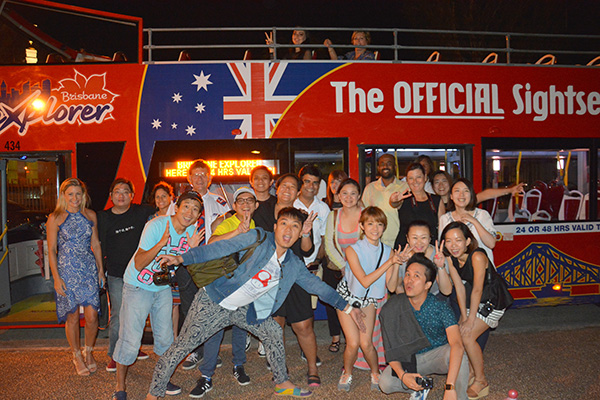 The Hop On – Hop Off city tourist bus allows us to soak up the sparkling lights of the city on our way to Pony Restaurant, where stunning views of Story Bridge and share plates of wood-fired deliciousness await. The food is fabulous and served with saucy style by a flirtatious waiter who certainly knows a thing or two about earning tips from slightly inebriated women. 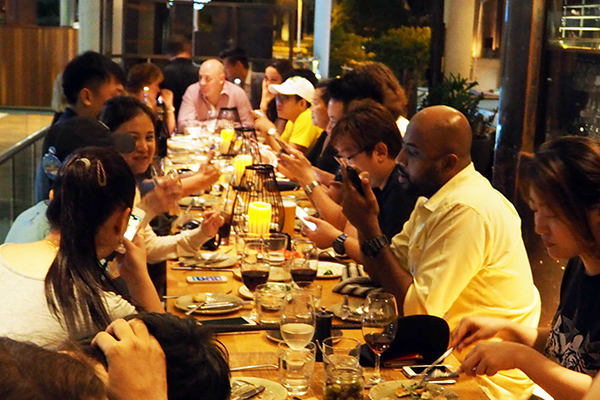 We’re eating, drinking and generally making merry when another challenge is announced. A blind food-test for one member of each team. I put my hand-up for this one because… food.

Now while a blind tasting for me usually means grabbing a greasy kebab at 3 AM after a big night on the turps, this time it involves being acually blindfolded and presented with a series of dishes which I have to name the key ingredient of. I nail it, even picking the sneaky hint of ginger hidden in a delicious mango macaron. Best of all, the bonus point means Team Australia finish the day in front, and we’ve managed it without a selfie stick in sight.

Day two dawns and we’re on our way to the Sunshine Coast and Australia Zoo where the zoo’s resident wildlife warriors taking on the crocs in the Crocoseum before taking on a few of the zoos less lethal residents ourselves. 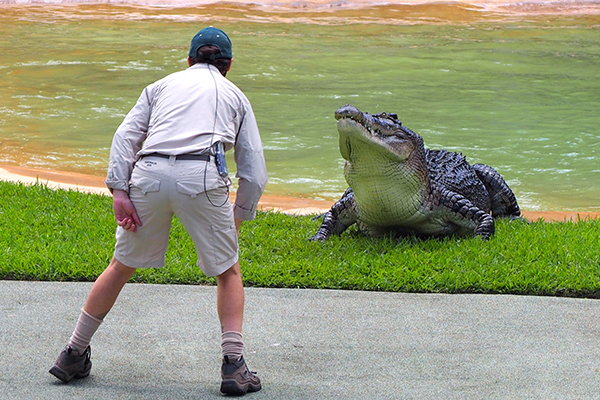 Our first challenge is to get a selfie with Skippy. Then we’re asked to cuddle a python. Crikey! It’s a task that is accompanied by much squealing though, for once, not by me. I practically throw the gorgeous snake around my neck like a slithering channel scarf. He is beautiful. I am smitten. 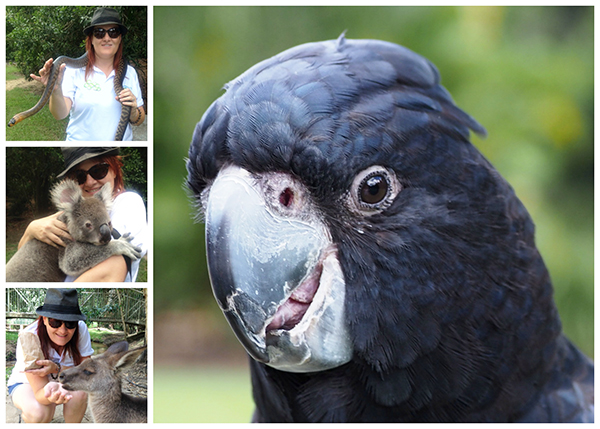 There’s also a koala to cuddle, a cockatoo to chat with, and an extremely cute wombat to meet… though he is far more interested in noshing on his corn than hanging out with me.

We’re then split into two groups. Mine is heading to the popular resort town of Mooloolaba for our next series of challenges. I’m excited. With its glorious beaches, funky cafes and boutiques, I assume we’re up for a fairly breezy and blissful afternoon. 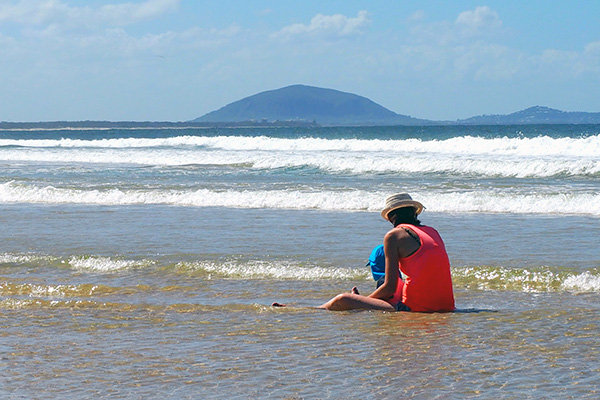 Assumptions are never a good idea.

The afternoon turns out to be more wheezy than breezy and I’m soon face-first on Moololaba Beach watching my #escapers15 buddies fade into the distance. Lifesaver training! This I did not predict.

The lifesavers at Mooloolaba Life Saving Club have us clad in caps and skin tight hot pink lycra which, with my ample gut and aversion to pink, is something we need not discuss at length. We’re then asked to lay flat on our stomachs in the sand, which at least hides mine for a moment. 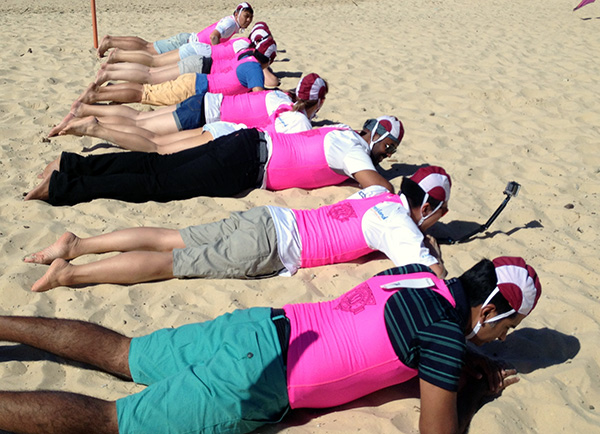 When the siren sounds we are told to run as fast as we can to grab one of the flags at the end. But there are twice as many of us as there are flags. And only those who nab one will win a point. Easy peasy.

For everyone else that is. Given that I have the athletic abilities of the average house brick, it will be of no great surprise to anyone that I didn’t manage to nab anything other than a mouthful of sand… in fact if this competition comes down to survival of the fittest, we’re buggered!

Next up is a high-power jet boat ride, something I’d done before on Sydney Harbour. Or not, as it turns out. Unlike my previous jet boating experience, The Mooloolaba Jet Boat is enclosed. And I am claustrophobic. Hoorah. 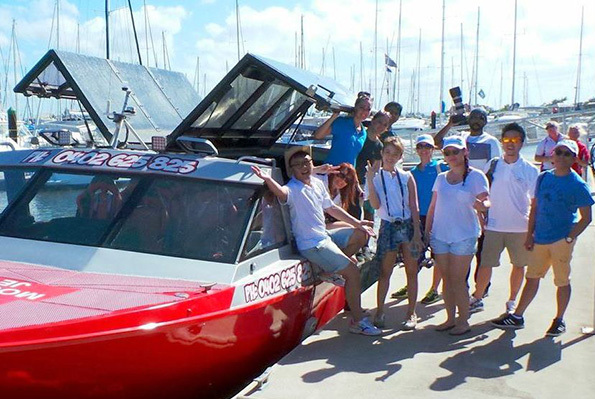 We’re soon locked and loaded into the jet boat and taken on a white-knuckle thrill-ride off the coast. Having been brought up on boats I love ducking, diving and spinning through the waves off Mooloolaba. 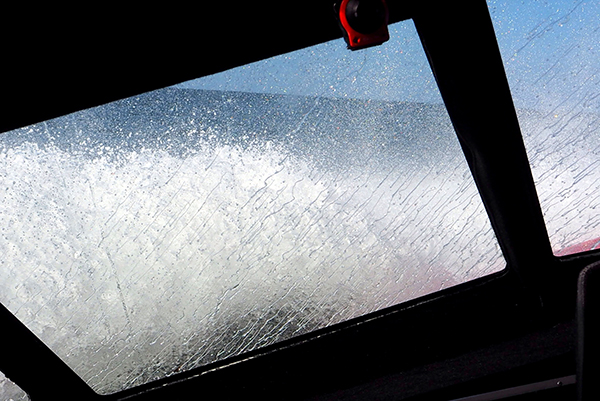 The claustrophobia? Not so much. But hey, by its very definition a challenge is not meant to be easy.

Happily, our evening is all about open spaces. We’re staying at the fabulous Novotel Twin Waters Resort, a sprawling family-friendly resort set around a private lagoon. 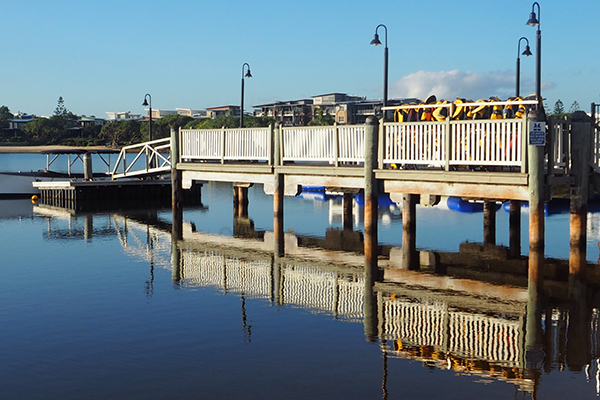 There’s a swimming pool, kayaks and catamarans and even an inflatable water slide… my kids would be in heaven here. 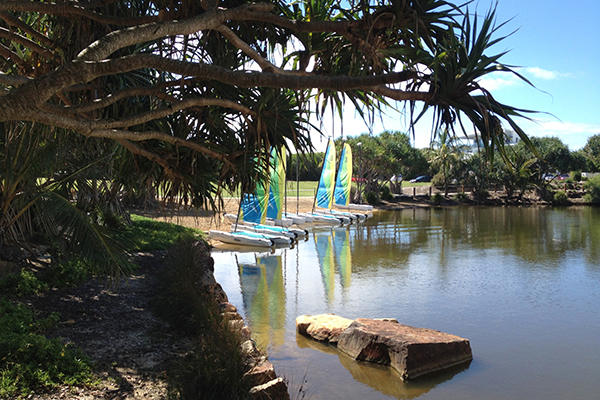 I enjoy a moment of quiet and a juicy mango on the beach before heading back to relax in my spacious room. Then we’re treated to an amazing evening dining barefoot on the beach under an incredible cabana. 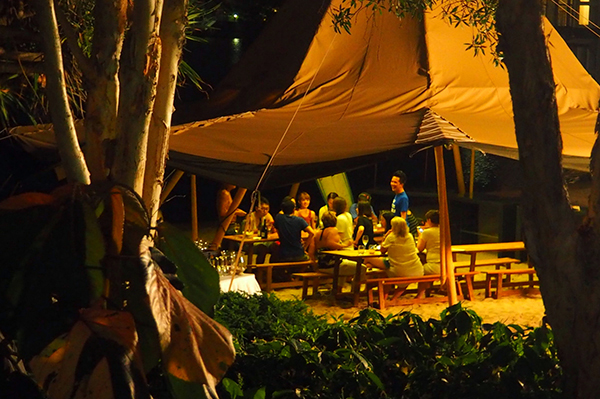 We are welcomed by local Indigenous dancers and dine on an amazing buffet barbecue of local seafood and meats. 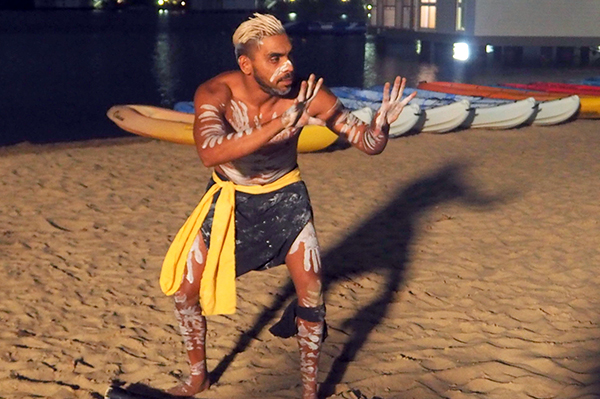 It’s a lovely evening with our fabulous new friends from around the world until the gauntlet is thrown and drinking-games commence. Given the multiple language backgrounds of the #escapers15 crew the rules (and I use that word lightly) are mostly communicated by interpretative dance. Knowing that there will be a tomorrow I decide to sit out the extreme drinking and act only as a cheer squad for my teammate, Deb, who impresses us all with her table dancing talents. 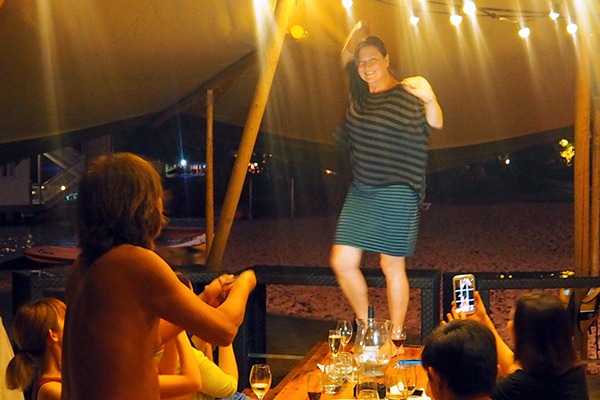 The green faces of my fellow Escapers at breakfast the following morning is all the confirmation I need that my decision to skip the Inebriation Olympics was a wise one. We’re split into two groups for our morning challenges. Deb’s superior kayaking and sailing skills score us a bonus point and I do my bit over a few holes of mini golf and a Segway egg and spoon race… where mine ends up a little scrambled! 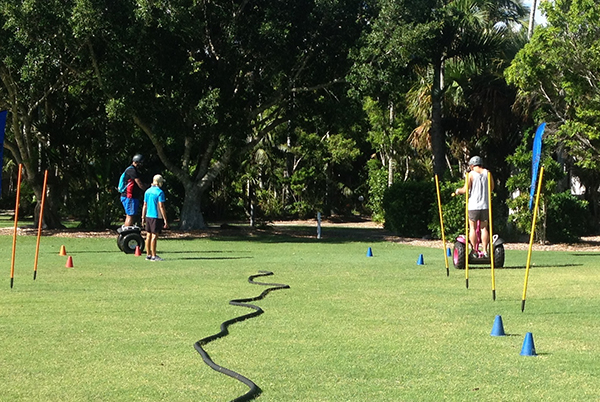 Now we’re all off to the glittering Gold Coast for our final day of challenges… who knows what’s in store?

BoyEatsWorld was hosted by the fabulous folk at Tourism Queensland, Accor Hotels, Limoso Limousines and Scoot Airlines on the awesome Australian leg of our #escapers15 adventure. To fin out how it all started you can read about the #escapers15 Singapore Sessions here…

14 Comments on #Escapers15 – This is Queensland