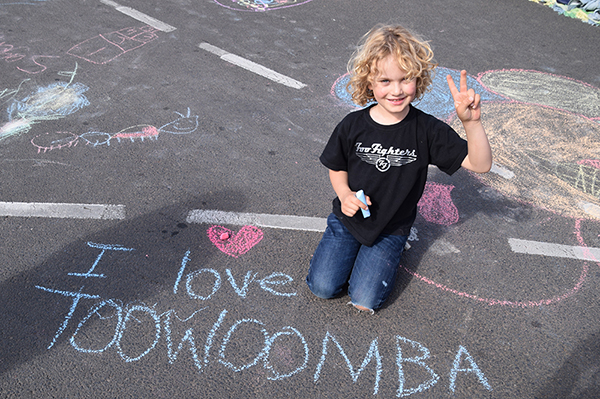 Toowoomba, located just 125 km west of Brisbane in the Darling Downs,  is a Tardis of a town. It’s 19th century buildings and heritage listed 96-year-old dunny so perfectly preserved could we could easily be convinced that we’ve stepped back in time.

But to shake things up a little, these icons of another age share a postcode with modern street art, a world class food scene, engaging interactive museums and state-of-the art playgrounds. 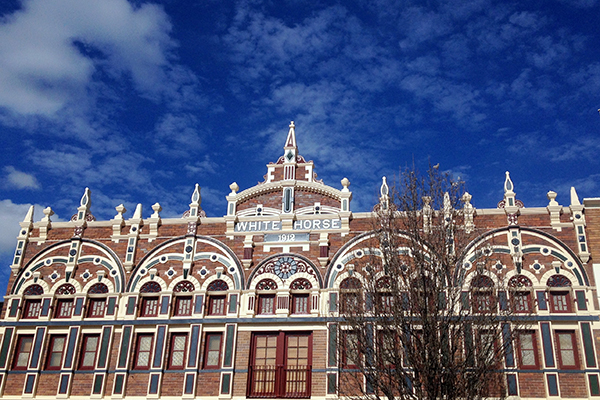 In fact there are so many things to do in Toowoomba with kids that Raffles and Sugarpuff are quickly hinting at a permanent move. 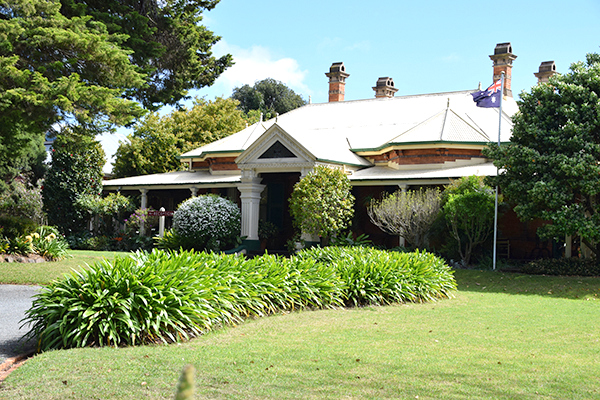 After only a few days exploring Toowoomba with kids, we feel like we’ve been time tripping. And nowhere more so than at our hotel, the heritage-listed Vacy Hall. The gorgeous guesthouse is a like a time capsule filled with fascinating antiques and curios. Including an incredible collection of old luggage that Raffles is particularly taken with… mostly for the stickers. 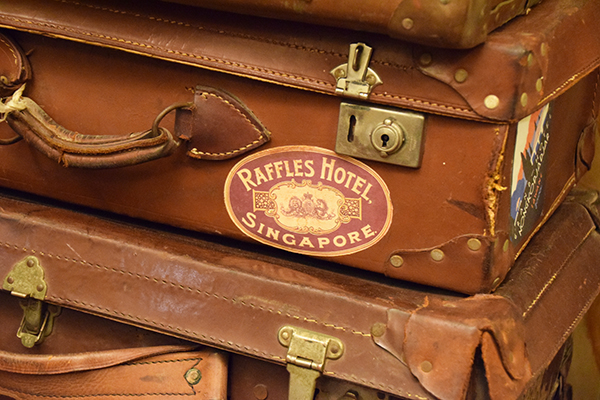 It’s one of those places that elicits gasps as you enter. When our host, Graham, welcomes us inside it becomes immediately apparent that this 116 year-old guesthouse is also one of those places not designed for rambunctious small people. Which may be a problem given that my two are experts in mad rambunction.

To our great shock, the tiny travellers are made feel very welcome. They’re given permission to run amok in the home’s acres of garden which come complete with swing set. But there are two rules they’re asked to adhere to indoors. The first rule of Vacy Hall club is to keep their voices down. The second rule of Vacy Hall club is to avoid running and thumping on the gorgeous, though noisy, parquetry floors and wraparound verandas. 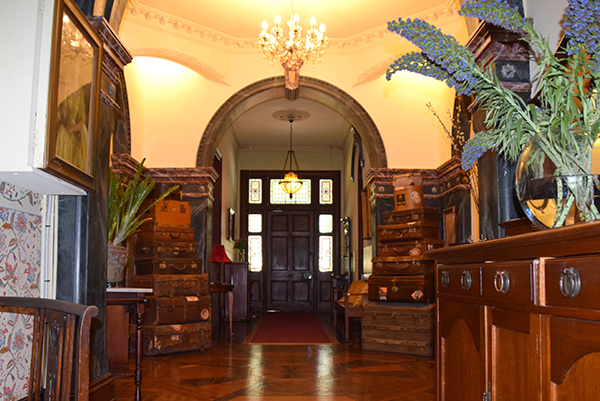 Given that Raffles cannot actually propel himself in any direction unless it is via the martial arts/dance hybrid he calls walking, and that Sugarpuff thinks stealth means thumping about like a baby elephant, we’re in all kinds of trouble. But, surprise surprise… there’s something so special about Vacy Hall that it makes the kids positively reverential and they keep their signature chaos in check… the entire freaking time! 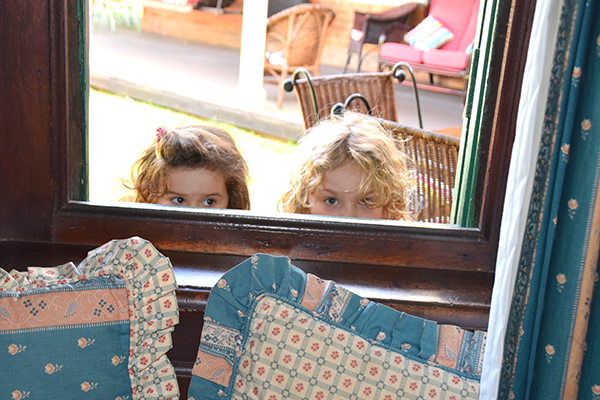 Well almost. Graham, if you are looking at this I swear that no cushions were harmed in the making of this image. And technically they aren’t jumping on the floor and the cushion battle was undertaken with the utmost quiet. 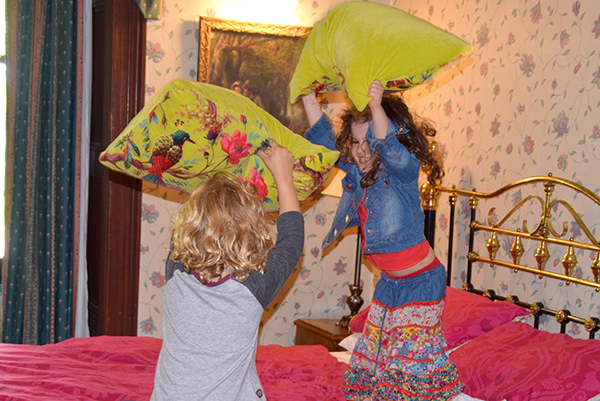 Indeed with the exception of this one wee transgression, it is such a miraculous transformation in behaviour that we too are reverential to the point of worship. Of Graham. Because anyone who can convince our offspring to voluntarily keep the decibels down – without argument – is deserving of idolatry.

Our spacious room is breathtaking, with a period fireplace, big comfy armchairs, a brass bed, sash windows and what the kids are convinced is a doggy door. 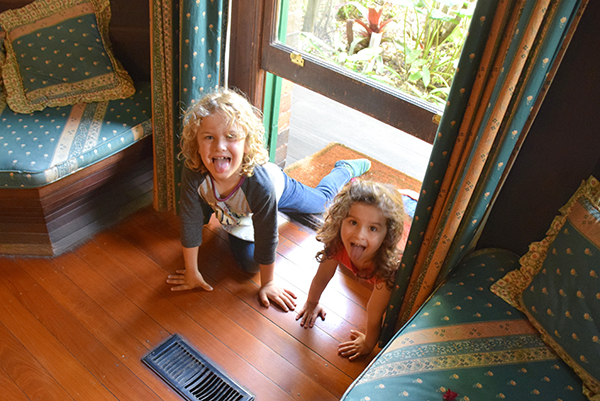 We’re tempted to throw the throw them some dog biscuits and lock them outside so we can soak up the tranquillity.

Instead we pack up our pups and head to the Cobb and Co Museum,  home of the National Carriage Collection. One of the best things to do in Toowoomba with kids, the museum is packed with interactive fun and interesting exhibits, but is still small enough to hold younger  kids attention. 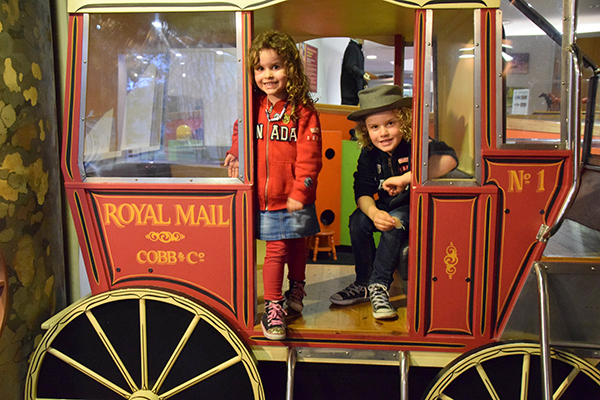 But for all the fascinating exhibits, including carriages literally fit for a Queen, it is the rather ordinary dunny cart that my offspring and husband are most excited by. Because toilet. It must be said that while many of the plentiful exhibitions have interactive elements the kids can see, hear and touch, I’m kinda relieved to discover that the dunny cart is not. 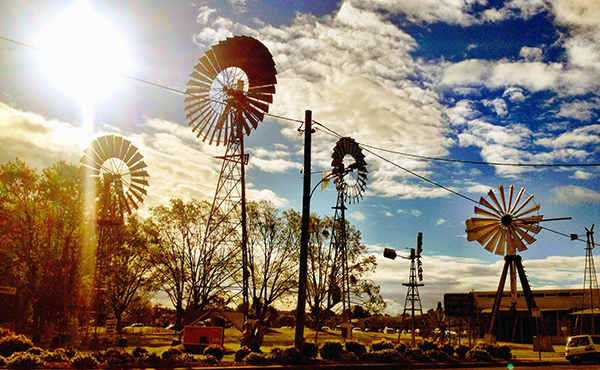 Thankfully, the museum’s school holiday program soon created a lull in the toilet humour and the kids are up instead up to their elbows in cool crafts and fun activities.

The kids also enjoy Highfields Pioneer Village Museum and Park with its intriguing collections of working antique radios, vintage machinery and vehicles. There’s also a Blacksmith Shop and Boot Repair Shop. But for me the real prize is Highfields’ billy tea and damper smothered in butter and golden syrup. 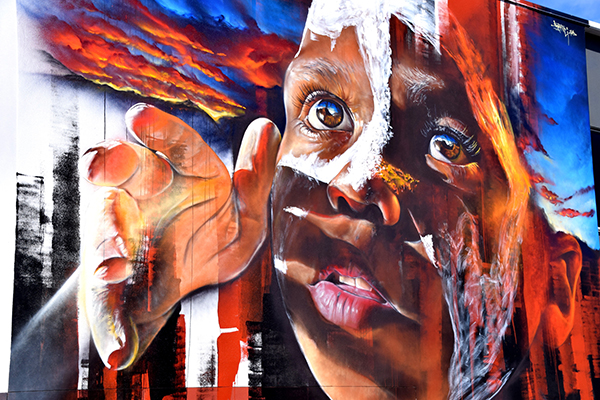 One thing we didn’t expect from Toowoomba was street art! It is everywhere. And it is good. It The local council used graffiti removal funding to start an annual street art festival called First Coat in 2013, in a last ditch bid to wipe out graffiti tagging. The gamble paid off as now an ever growing collection of more than 80 large scale street art masterpieces from local and international artists – including works by a few of our street art faves, Alex Lehours and Fintan Magee – have turned the city into an outdoor art gallery. In fact, Toowoomba’s street art scene is starting to rival Melbourne’s, and the kids delight in exploring the town to see all the amazing installations. 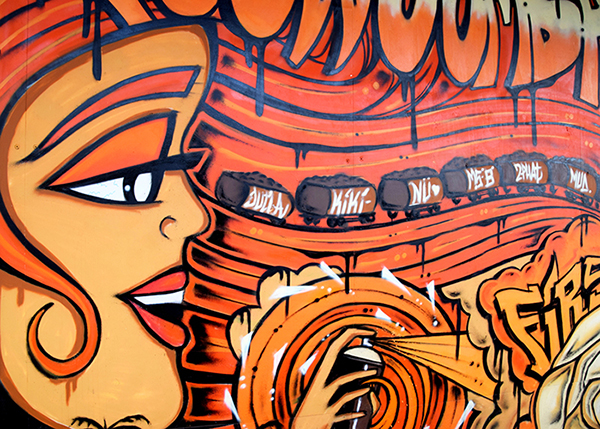 While we spot so many great works, we all agree that none can surpass the goose bump inducing big wall portrait of an indigenous boy by legendary Melbourne artist Adnate. It is so incredibly mesmerising that we return to get lost in those eyes again and again over the weekend. 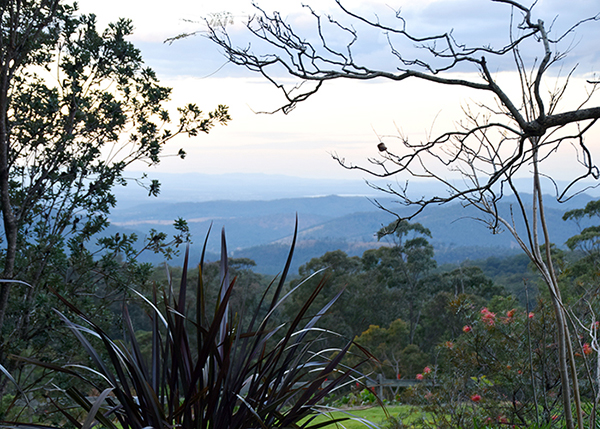 We head out of town for some fresh country air in a self-contained cottage at Ravensbourne Escape, a sprawling estate overlooking the spectacular Ravensbourne National Park on the eastern escarpment of the Great Dividing Range., just 45-minutes from Toowoomba

It proves the perfect place for some much needed family time, with plenty of space for the kids to run about and wear themselves out. While the interiors are comfy and beautifully finished, our favourite spot is the wrap around balcony, which provides perfect vistas and a soundtrack of birdsong as the sun sets. There’s also an awesome on site restaurant, Sketches at Ravensbourne Escapes,  that serves up platters of barbecued deliciousness with more of those incredible views.

Ravensbourne Escape is an ideal spot from which to further explore quaint country towns like nearby Crows Nest, as well as the national park walking trail to the gorgeous Crows Nest Falls with its lookout over a deep gorge known locally as the Valley of Diamonds. 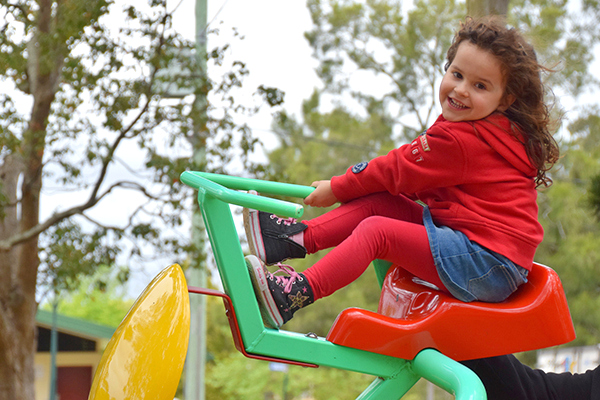 Park life is something family friendly Toowoomba excels at, with 165 council parks and gardens packed with state-of-the-art equipment to swing, climb, crawl and slide on. There’s even a great outdoor playground at the city’s Wellcamp Airport. 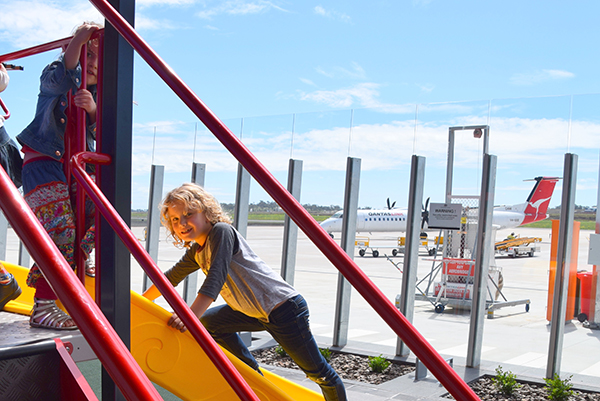 One particularly stunning example is The University of Southern Queensland’s traditionally designed Japanese Garden, Ju Raku En, which comes complete with ducks, striking red bridges and a waterfall and proves a lovely place to meander a while. Speaking of Japan… Raffles also goes a little Rabid in Towooomba’s Neo-Tokyo. And while its not a playground, its one of the best Japanese anime and pop-culture stores we’ve seen, and it ends up costing me a few new Studio Ghibli films to get him back outside to explore.

We could easily spend our entire trip on a playground crawl – something I’m sure would elicit zero complaints Sugarpuff.  Picnic Point Lookout and Parklands – perched on top of the Great Dividing Range with panoramic views over Main Range and Lockyer Valley – takes out number one on the Toowoomba with kids playground hit parade. 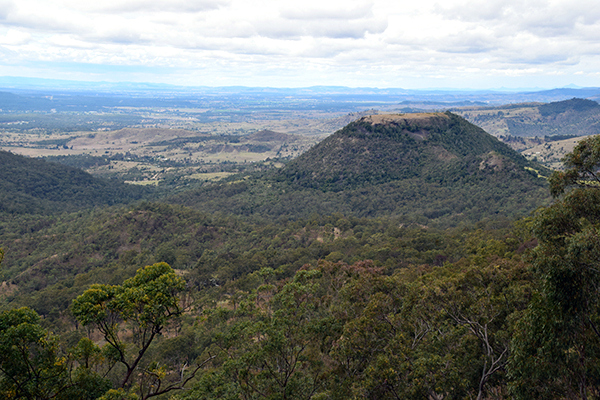 Sugarpuff gets her best evil cackle on at the Parkland’s Magical Witch’s Forest playground, a deliciously eccentric play space of rickety windows, tilted turrets, quirky cats and cubby houses. Raffles is more enchanted by the flying fox off to the side.

Toowoomba dining out with kids 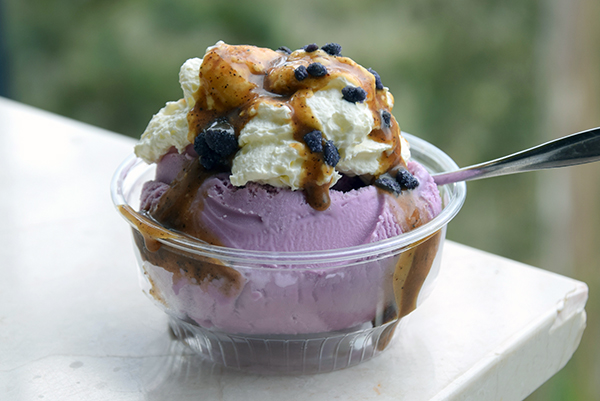 For me Picnic Points starring attraction is not the slides of flying fox but  the intriguing wattle and violet ice cream sundae that I shovel into my face at the Picnic Point Café.

With some of the best local produce in Australia on its doorstep, the region is home to a thriving foodie scene which is lucky give Raffles unquenchable appetite. 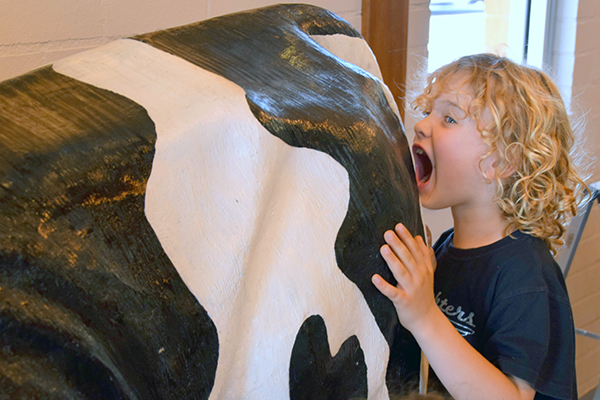 We’re impressed by many of the establishments we eat our way through.

There are Angus mignons, delectable dips and a whole-baked Brie at the very cool, family-friendly local, Fitzy’s on Margaret. And at The Spotted Cow,  Raffles dives face first into a massive bowl of Bouillabaisse that deserves a special mention. 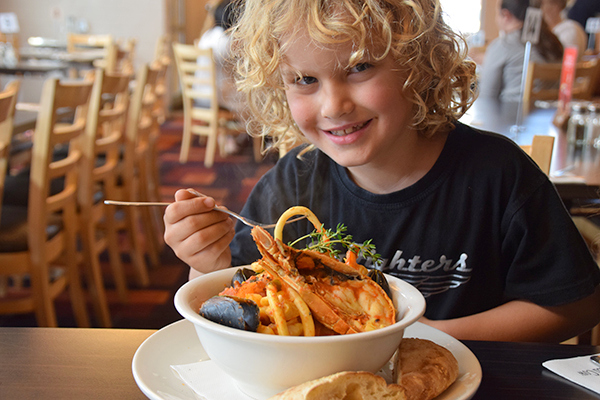 As does  the breakfast at  The Chocolate Cottage in Highfields, an atmospheric old schoolhouse and garden converted into a colourful café. 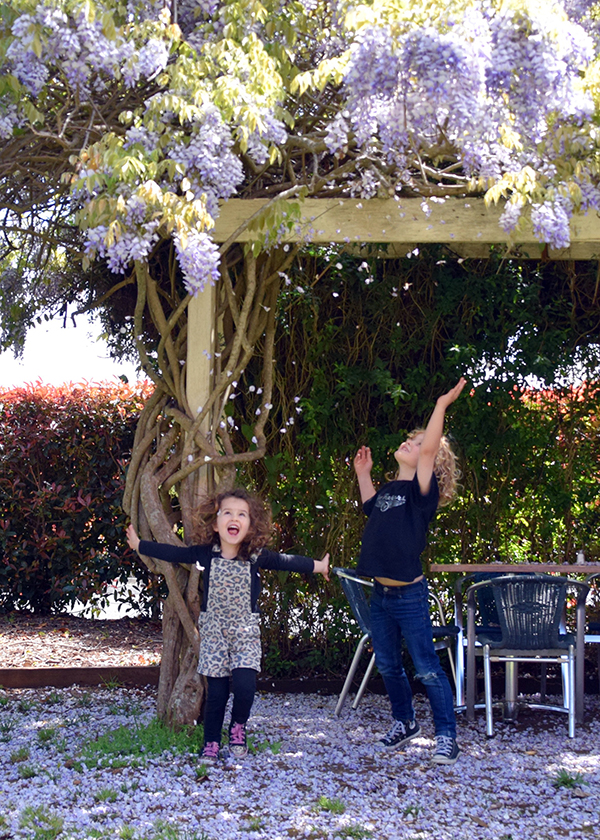 The food – think smoked salmon with scrambled eggs, hollandaise and preserved lemon gremolata and towering pancake stacks studded with twists of bacon – is fabulous. As are the house-made chocolates, all 60 varieties of them. 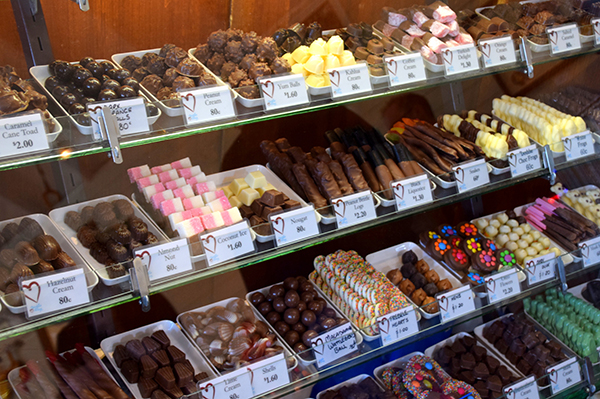 And best of all, there’s a massive green space where the kids can climb trees and burn off all that sugar before we head back Vacy Hall, and they have to recalibrate back into stealth mode.

Just an hour and a half drive west of Brisbane and two and a half hours from the Gold Coast, Toowoomba is an easily accessible city. There’s also a regional airport, Brisbane West Wellcamp Airport, an easy 20 minute drive from town, with regular flights form capital cities.

3 Comments on Things to do in Toowoomba with kids