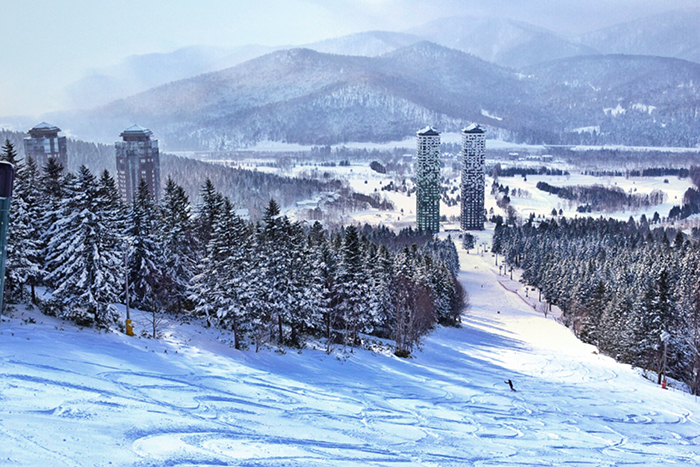 It’s sooo fluffy” declares Raffles happily as he leaps out of our coach into the nearest heap of fresh snow, disappearing somewhere into its powdery depths. We’ve arrived at Hoshino Resorts RISONARE Tomamu, just a 90-minute drive from New Chitose Airport in Sapporo, to flurries of snowflakes dancing in the sky like frosty fairies. I’m so entranced that I momentarily forget I’m travelling with a nine-year old boy and don’t make it as far as the front door before the first snowball hits me square in the head.

I suspect it will be the first of many.

Tired following our flight from Australia, we planned on taking the afternoon easy but one glance at the pillowy, white powder snow that Hokkaido is so famous for, and we are racing to the resort’s in-house ski shop to get kitted out with skis and boots in preparation for a mountainside mission. 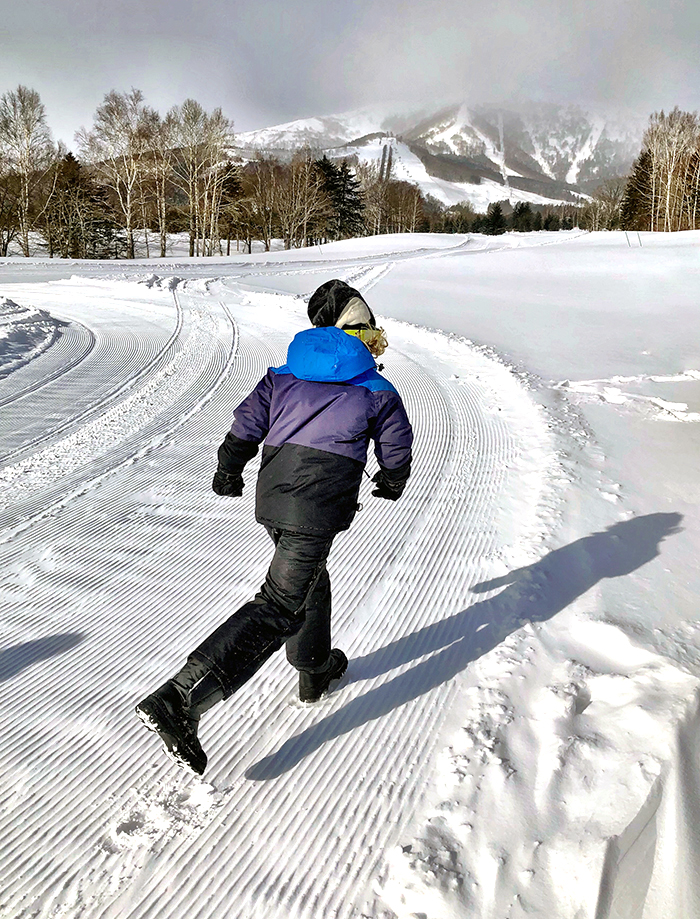 Of course, any mission that involves Raffles is also going to involve food, so we pop our gear in a locker and head to hotalu street, Japan’s first ski in/ski out shopping and dining street to ramen ourselves up at AFURI, one of the more than 20 restaurants scattered around the resort. 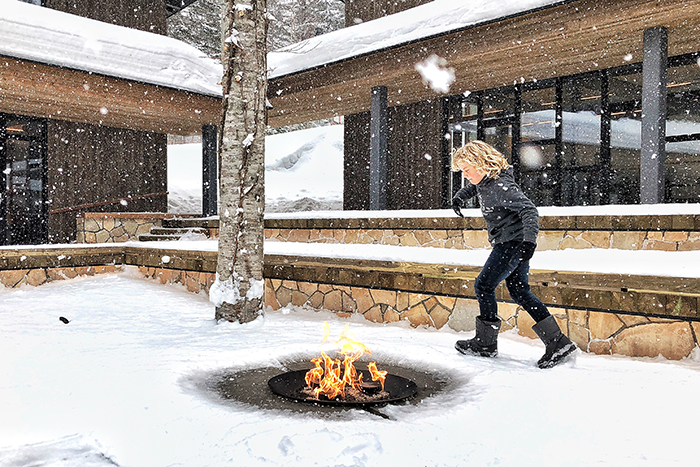 I dive headfirst into a bowl of zingy Yuzu Ratanmen while Raffles sips and slurps down a bowl of Tsukemen.  Already stupidly excited, the steaming noodles have Raffles skittering about like a loon.

“Let’s ski” he squeals, running back out into the snow and into the tunnels that connect hotalu street to both Hoshino Resorts RISONARE Tomamu and sister property, Hoshino Resorts Tomamu The Tower.

Located on the hill within the self-contained hotel complex, the five-star, all-suite, ski in/ski out Hoshino Resorts RISONARE Tomamu is surrounded by a pretty snow-dusted pine forest. I’m eager to explore what’s on offer for Hoshino Resorts TOMAMU with kids and keen to check out our enormous suite, but Raffles has snow on the brain, and he’s ushering me out the door as soon as we’ve donned our ski gear. 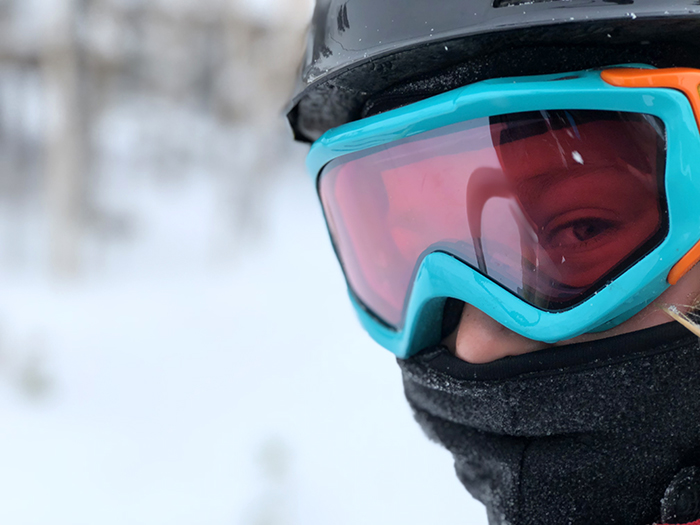 Barely an hour after our arrival, we are skiing out of the resort down to the Tower Express chairlift, which takes us about halfway up the mountain and for our first experience of skiing on powder. 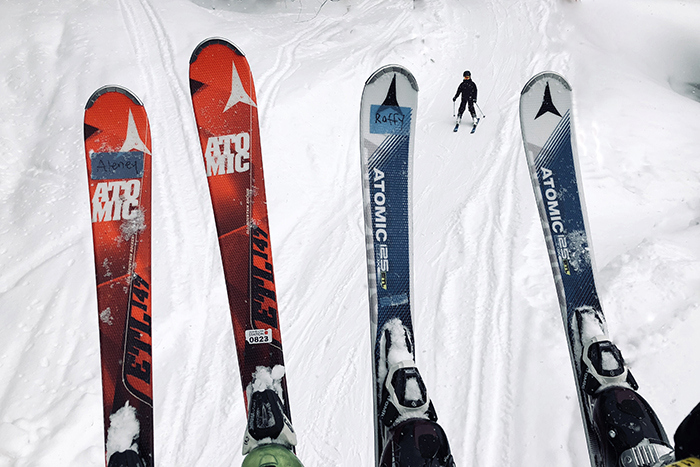 We’d been warned it might take some getting used to, instead we’re immediately hooked on the deep, silky pow. 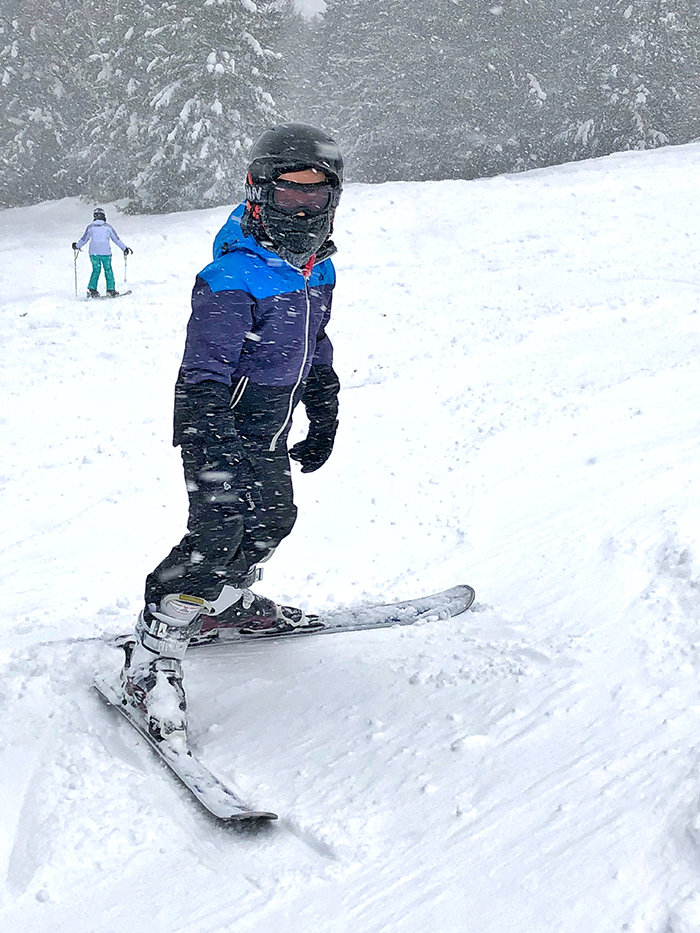 We squeeze in a few hours of exhilarating runs before it’s time to call it a day, spotting dozens of cute woodpecker houses and squirrel bridge in the trees surrounding the lift to RISONAIRE.

We lob our gear in the lockers by the door, and head straight up our two-bedroom suite on the fifteenth floor, which offers us an enormous 120 square-metres of luxurious space, almost unheard of in Japan where rooms tend to be on the smaller side. There’s a separate living room, a shower room, and a huge bathroom with a separate shower, a private sauna and a Jacuzzi overlooking the slopes. 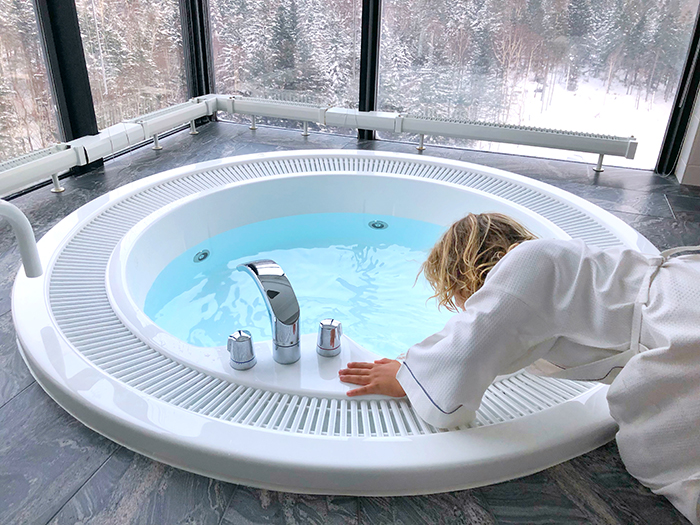 Ten points for guessing where we spend the next hour.

After devouring our not insubstantial bodyweight in crab at hal, the resort’s exceptional buffet, we end our night at the Ice Village, an illuminated winter wonderland with an ice rink built entirely of ice, which is just one of the other exceptional off piste attractions and activities at Hoshino Resorts TOMAMU. 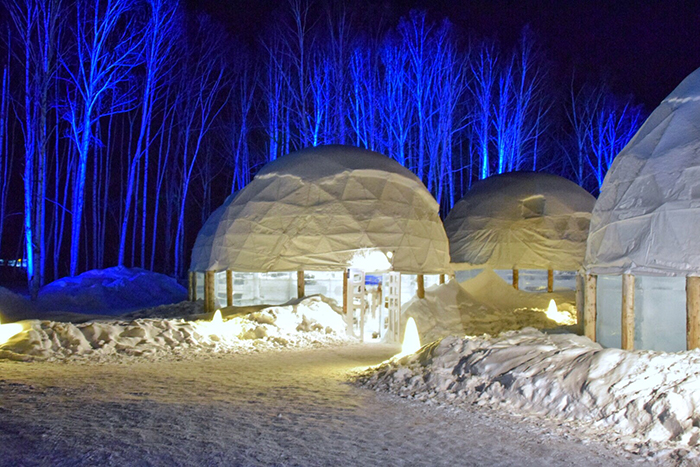 We attempt to get our skates on but temperatures have dropped to -23 and when our gloves freeze literally solid, along with our icy tears of laughter, so we call it a night.

We awake to blue skies and a heavy carpet of snow and are geared up ready to explore the 29 runs as soon as the lifts open. The Hoshino Resorts TOMAMU ski area offers a variety of terrain from an awesome beginner’s area to great groomers for intermediates. 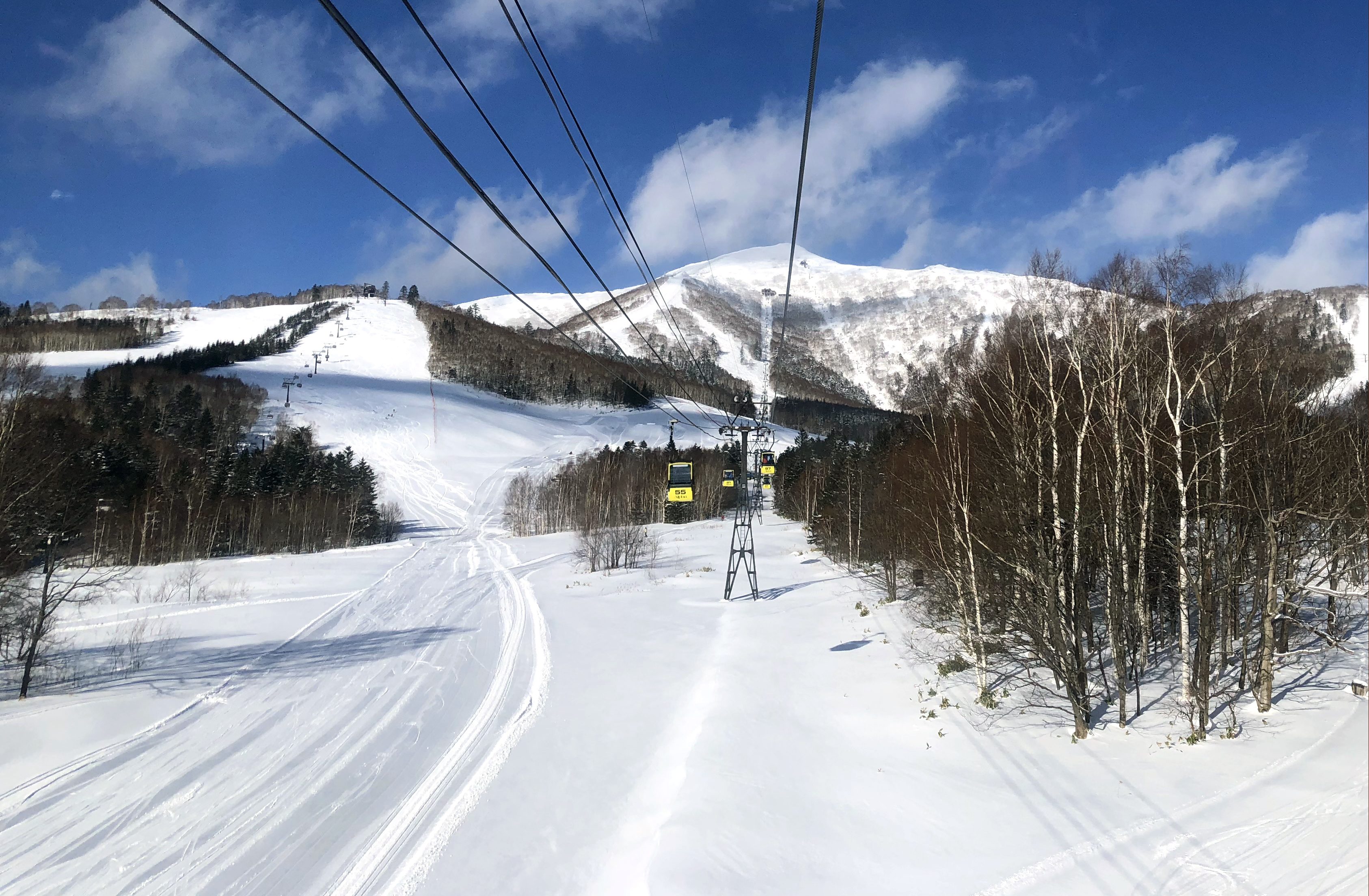 There are also a few mogul runs and back country skiing for the experts, something we are not, so we head back up The Tower Express for a warm up runs before hooking off on an ungroomed blue run so fluffy it’s like skiing through a field of cotton candy to the Resort Centre. 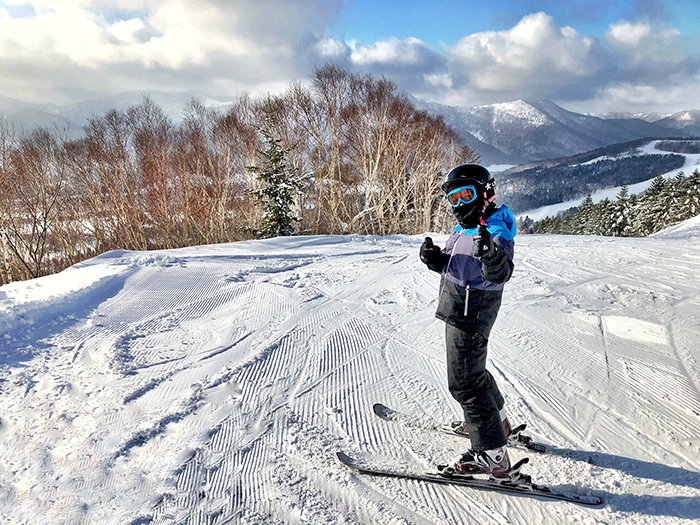 From there we take the 13-minute ride on the Unkai Gondola to the startlingly pretty Terrace of Frost Tree and its surrounding sea of white snow. The frost trees are so otherworldly and look so much like something from a fairytale one could be forgiven for thinking it has been zapped into frozen place by a tanty throwing Queen Elsa. 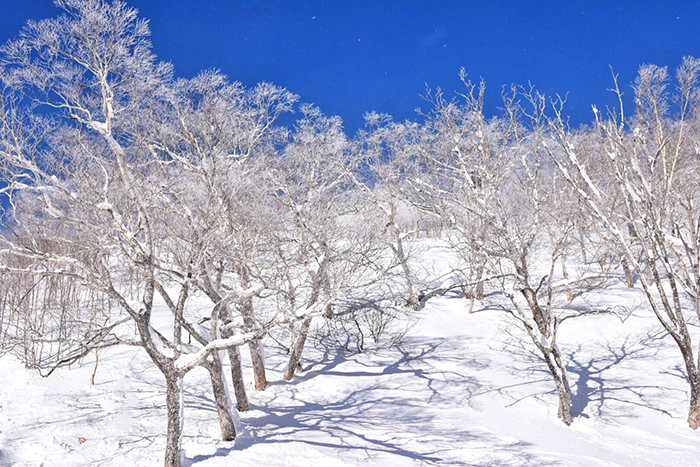 The views from the terrace are just as mesmerising and we soak them up over steamy hot chocolate around a fire. 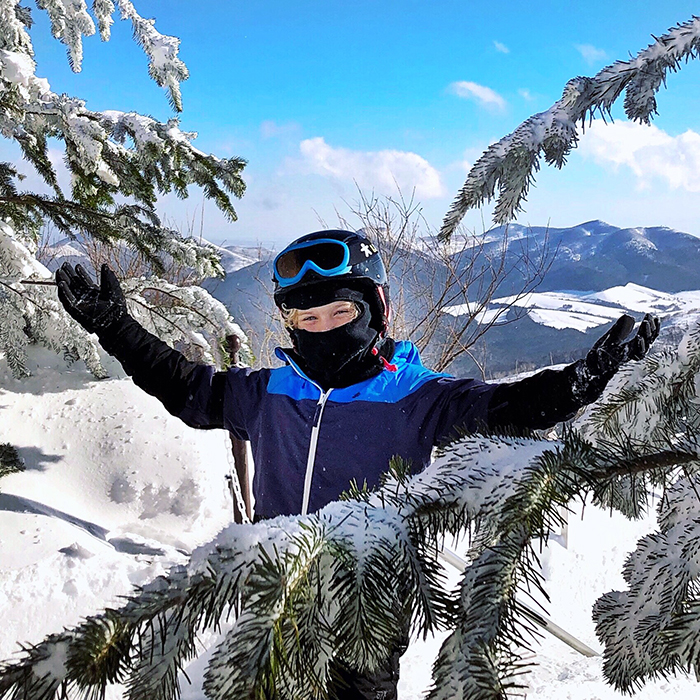 We grab a couple of gargantuan marshmallows to toast, Raffles showing off his mad mallow skills while I manage to set fire to my ski gloves in the heat. 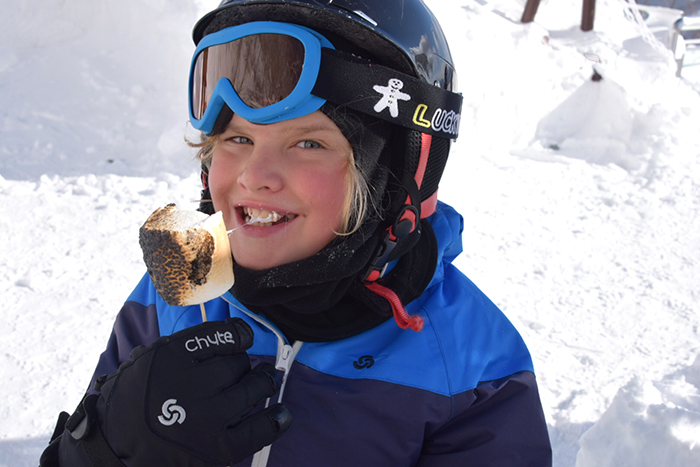 While I shove my molten hands in the snow before they burn my skin, Raffles and his instructor pal, Yu, spot a bunch of snowtrikes and are careering down the hill at break neck speed. 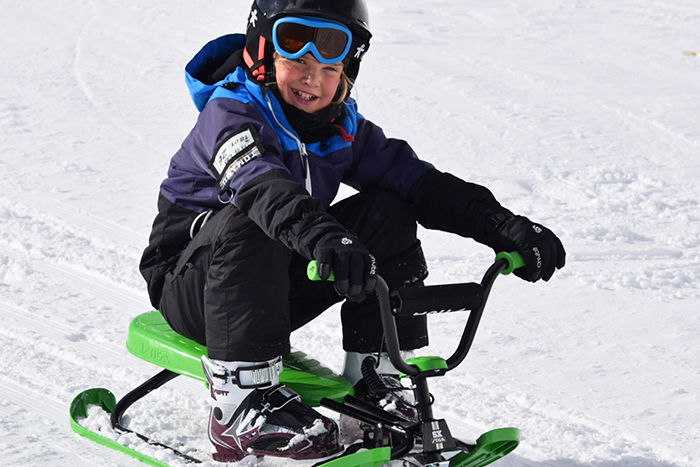 We take Dragon Ridge down to the massive Exhibition run, the longest groomed run in the resort, where I stack in spectacular style and am left flailing in the powder, my speed demon offspring leaving me in his powdery wake.

When I finally unbury myself from the deep powder and catch him up, we head to the Resort Centre for lunch, Raffles pigging down a delicious soup curry, a Hokkaido specialty, before heading to Farm Designs, belly at the ready for some of famous the Choco-Moo cheesecake he’d seen showcased on television by his foodie idol Adam Liaw.

The cheesecake is every bit as good as expected, cheesy, creamy, light and luscious, but still not content he decides to shove a Hokkaido Milk ice cream down his throat for good measure because what else could a boy want in -15 degree temps than more frozen stuff? 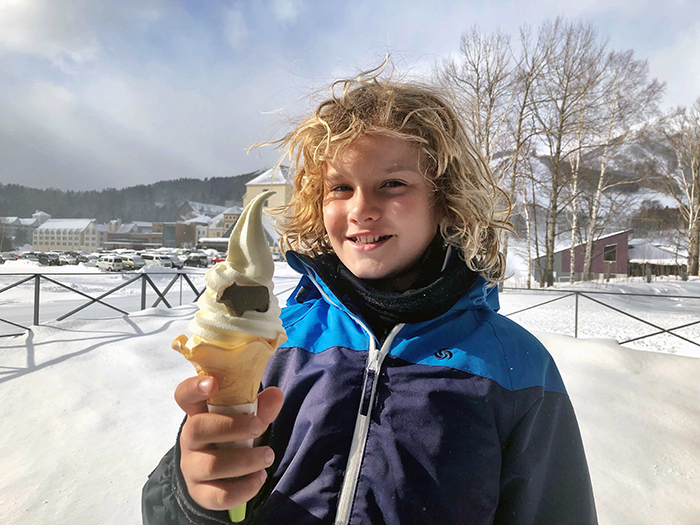 Fueled up and raring for more icy runs, Raffles and Yu leap back on the Unkai Gondola while I take a break to check out some of the fantastic offerings at the hotel’s sister resort, Hoshino Resort The Tower, a four-star, family-friendly option with a choice of Japanese and Western style accommodation.

We meet back up at 4pm and Raffles is bursting with excitement. When I discover he’s been tree skiing I too almost explode, but more with fright, as I am more than a little terrified by my wee powder pup’s sudden pro ski skills. 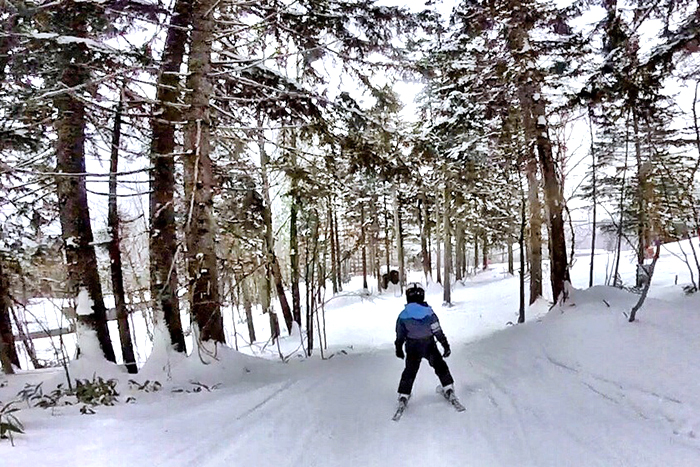 In what has been a series of skiing firsts, the afternoon sees Raffles ditch the intermediate slopes and groomed trails to head back into the trees, try his hand at night skiing and take his first ever short, but suitably hairy, black run. 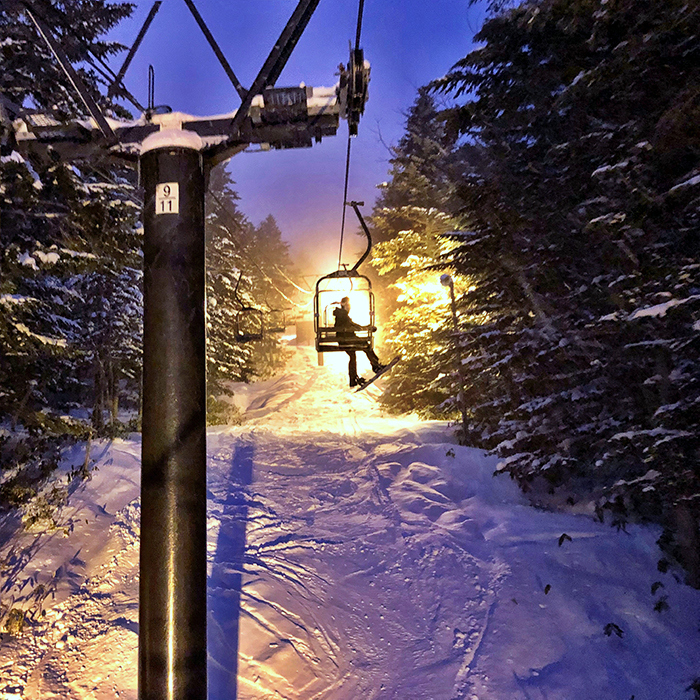 He celebrates with dinner fit for an Emperor at seafood pub, Kanemaru Goto Shoten, gobbling down an extravagant platter of silky sashimi, grilled Hokkaido scallops and a huge salmon hotpot, a specialty of the area. The food is as worthy of his affections as the day’s epic runs.

Thanks to the endless stretches of deep, delectable snow at Hoshino Resorts TOMAMU, my boy is hooked on powder. So much so that after another overnight dump, he skis continuously, unwearied, until the very second we need to board our coach for the airport. Even then having to be dragged away from the snow, kicking and screaming, but he gets his revenge with one last well-aimed snowball at his mother. 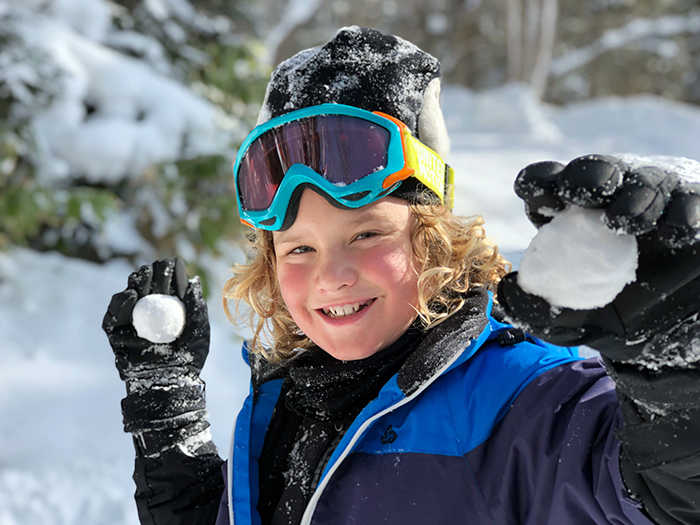 Disclosure: Raffles and I were kindly hosted by Hoshino Resorts TOMAMU but, like our opinions, all snowfights, stacks and sashimi scoffing are our own.