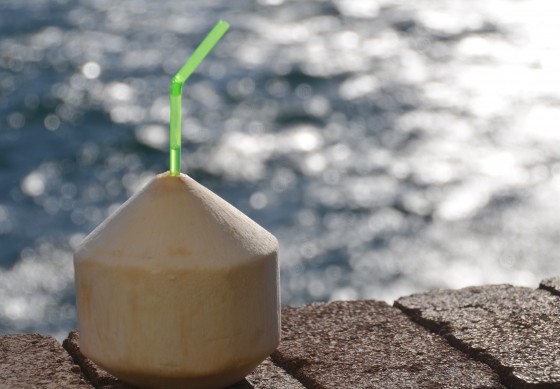 “Mama, it would be a really nice day to go to the Cook Islands” suggests a random Raffles as we look across the shimmering water of Sydney Harbour on a beautiful blue sky day. All our recent Cook Islands reminiscing has my little man hungry to retrace our steps to Rarotonga and Aitutaki… the logistics of which not entering into any of his equations.

“Then let’s go,” I suggest. Inspired, and hungry, I figure we can cook up a little taste of the Cook Islands at home. After a dash to the market for supplies Raffles grabs his coconut shell ukulele for a spot of musical mood enhancement. It would be fair to say he’s not exactly a virtuoso so I suggest we instead let the stereo supply the soundtrack. As the Hoodoo Guru’s Leilani pumps out loudly, the kids get a little “bottom dancing” in and the scene is set. Well almost…

My kooky little man rushes off and comes back wearing his goggles and snorkel, as you do when you’re about to start cooking.

“Mama, now I LOOK like I’m in the Cook Islands” he declares with confidence. Is there a kind way to break it to him that he just looks mental? Together, my be-goggled one and I  hit the kitchen to rustle up a mouth-watering meal that will transport us back to our heavenly holiday. Of course, there has to be Ika Mata, the Cook Island’s addictive coconutty take on ceviche. 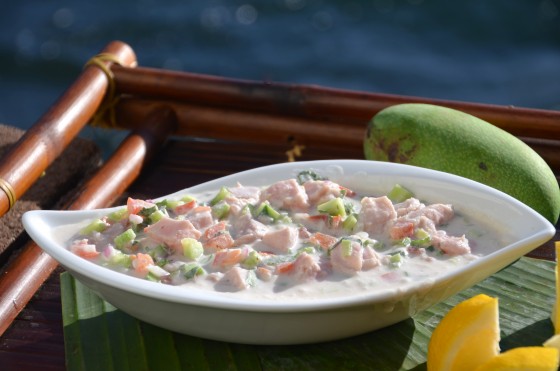 Raffles also insists on fish and chips, his fave holiday food, and something which he practically lived on during our visit. In the spirit of keeping it island style we’re using yellow fin tuna, as they did in Raro and we’re replacing traditional batter with a coconut beer batter to give it a taste of the tropics. 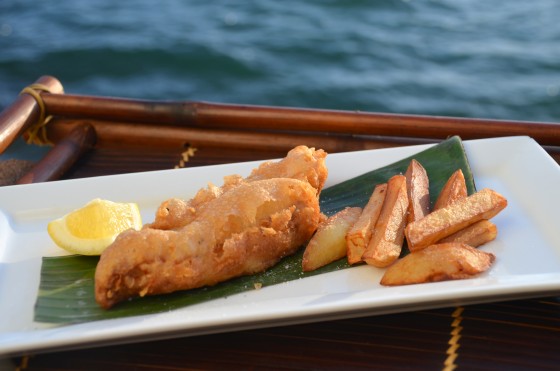 In honour of the abundance of coconuts in the Cook’s, our dessert is a sticky sweet concoction of  sugar banana fritters with store bought coconut sorbet and crispy roasted coconut chips.  Luscious. 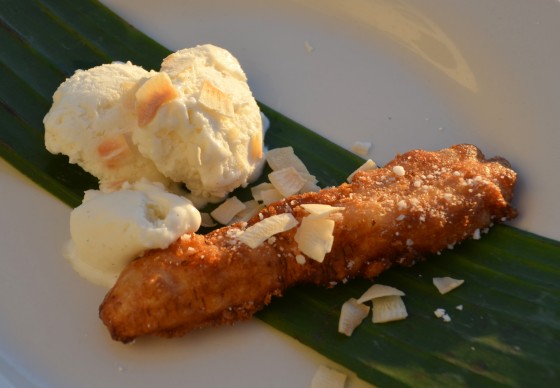 I dice and slice, Raffles mixes it together. He batters, I fry. I scoop, he sprinkles. We make quite the team my boy and I. We enjoy our meal by the water with some fresh drinking coconuts (all right, so mine may have a little rum in it too, but don’t tell!) and reminisce. Our bellies, once again being the key to reigniting happy memories of far flung places. THE RECIPES Ika Mata Ingredients: 300g Yellow Fin Tuna ½ cup fresh lemon juice ½ red onion, finely diced 1 large tomato, diced 1 small cucumber peeled, seeded and diced 1 tbsp green capsicum diced 1 tbsp finely diced spring onion 1/2  red chilli finely chopped 1 tbsp chopped fresh coriander 200ml coconut cream Salt and pepper to taste. Method: