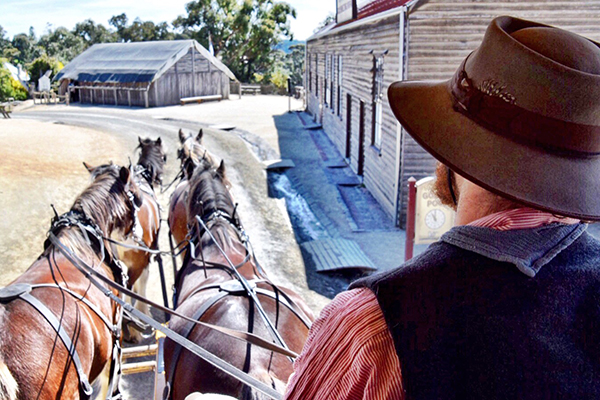 The promise of striking it rich during Ballarat’s gold rush lured almost 500,000 people to the Australian colonies, and their stories are told today at the incredible Sovereign Hill, an interactive, outdoor living museum. Here the kids share their own stories on Sovereign Hill for families.

While life in the goldfields was brutal for all but the wealthiest members of society, it was hardest of all on the children. The risk of injury in the mines was high, but hygiene was the biggest concern and thousands of kids died or where left orphaned. So the idea of a 24-hectare replica frontier town recreating life during the first ten brutal years of the gold rush may not sound like a whole lot of fun. But Sovereign Hill, complete with its main street, shops, industrial machinery, a theatre and mines, is exactly that and allows families to explore and experience first-hand the hopes, dreams and struggles of the people who flocked to the Victorian goldfields in the 1850s. And, like a theme park for history nuts, offers plenty of solid gold immersive fun.

Of course, while visiting Sovereign Hill with kids is a lot like taking a time machine into the past with its costumed folk, re-creation buildings, reenactments, and a river where you can pan for real gold, you’ll be happy to hear it does it without the disease, suffering and rioting. But don’t take my word for it!

After watching the incredible The Story Lives on at Sovereign Hill videos, which you can watch here http://www.thestoryliveson.com.au, about life in the goldfields, Raffles and Sugarpuff decided to immerse themselves into two action packed days living the gold rush life. They came out the other side not only entertained, but educated and incredibly grateful for their own easy lives. And they’ve decided to share their own stories.

Turns out one of the most popular experiences at Sovereign Hill for families, it must be said that, from the moment they picked up a pan at Sovereign Hill’s Red Hill Gully Diggings, both Raffles and Sugarpuff were struck down with a serious case of gold fever. Indeed, they even managed to sluice their way to half a dozen pieces of the glittering stuff. Though given their find has a collective value of about three cents, I think they’ll might have to work a little harder before they strike it rich. They also went underground, with our gorgeous guide Andre, as their ridiculously neurotic mama was too claustrophobic, on the Red Hill Mine Tour to discover the dark and dangerous world of deep lead mining. They checked out (a replica) of the 69-kilogram welcome nugget, and on a mine tram through a dark tunnel into the Secret Chamber, to follow the adventures of two Chinese diggers as they search for gold. 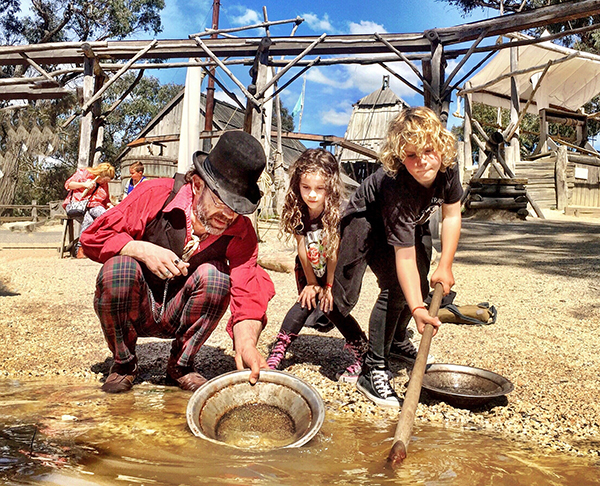 His Story:“When I first saw the gold pans I though panning for gold would be boring, but as soon as we started and I found a bit of gold on my very first try, I was hooked. If I’d had my way, I would have stayed at the diggings all day. I really liked going into the mines as well. That was where the old prospectors found the huge chunks of gold that would make them really rich. There was even a 69-kilogram nugget, the second biggest ever found in the world, which was huge. The coolest thing was seeing how they melted gold into blocks, the one we saw was worth like $160,000 but they locked it up in a bullet proof case before I could grab it. Darn it.” 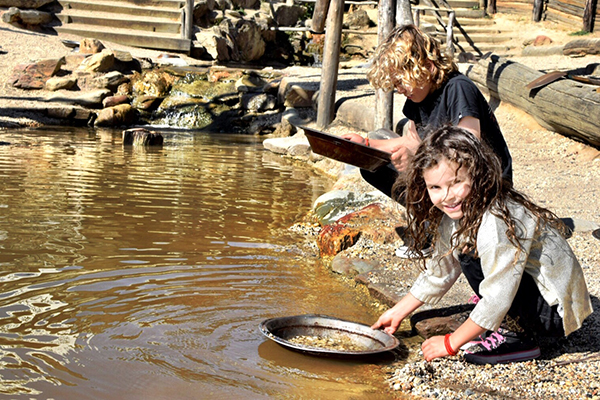 Her Story: “I love gold. I love how glittery and shiny it is and I love it because it makes you rich. I’m super good at panning for gold and found the biggest and most pieces of gold of anyone in our whole family. I reckon I’d make a good gold prospector but I think back in the olden days I wouldn’t have been allowed to because I’m a girl and would have had to clean and iron and sew and feed the chickens. And that would suck a bit because I prefer to play in dirt and find gold.”

Hands on learning at Sovereign Hill

On the Sovereign Hill goldfields, schools were established, often in tents made of canvas or other make-shift building materials, but initially it wasn’t compulsory or free, so attendance depended on whether parents could afford it, or if they valued education. Needless to say attendances were low and many young boys instead worked slavishly in the mines or as labourers, while girls would sew or act as maids to elite families. 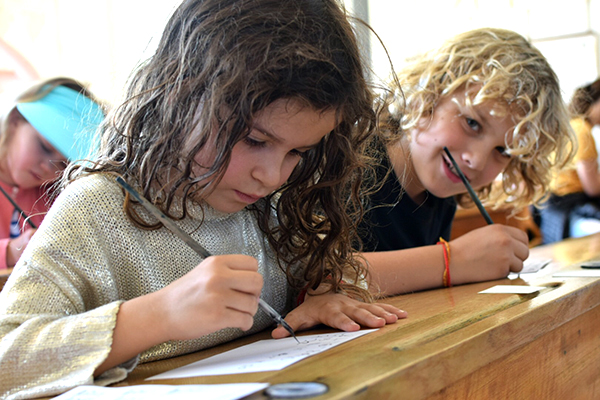 Everything was so labour intensive, just getting water up a hill required so much effort. I know I tried. And it was way more boring than school.  I did get to go to school for a lesson in handwriting and that was interesting. There were so many rules. The girls had to sit in a different section of the classroom, you were punished for using your left hand, you had to write with a quill dipped in ink which is really hard and if you didn’t obey the rules you’d get the cane!

It made me realise how lucky I am to go to school today where we have iPads and smart boards and girls and boys are treated the same. I’m glad the laws were changed and that we have to go to school because getting an education means getting a job that won’t break my back.” 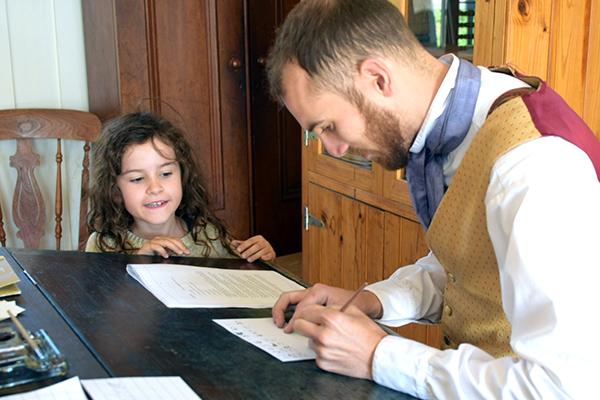 Her Story:  “I learned that girls didn’t have to go to school and that lots of families didn’t send girls at all because they didn’t think they were as important as boys. I think that’s so mean. I’m reading a book about clever girls who were scientists, explorers, inventors, and writers and if they hadn’t gone to school then there are things like medicines we wouldn’t even have. I think they were stupid heads for not caring about girls going to school.

I went to a class where the boys had to sit separately and were allowed to stay longer. The teacher marked my paper and said I did good. but I cried because I was sad for all those girls who lived in the gold rush because I love school and learning and I wish they could have got to learn too and make friends with boys and girls.”

Where to eat at Sovereign Hill with kids

From delectable delights at the Hope Bakery, devoured while watching Red Coat Soldiers parade and fire their muskets, to a spot of Devonshire tea, fresh toffee apples and handfuls of sweet raspberry drops, there was no shortage of delicious ye olde fodder for families to gobble down at Sovereign Hill. But more than being tasty, it was delivered in educational style. 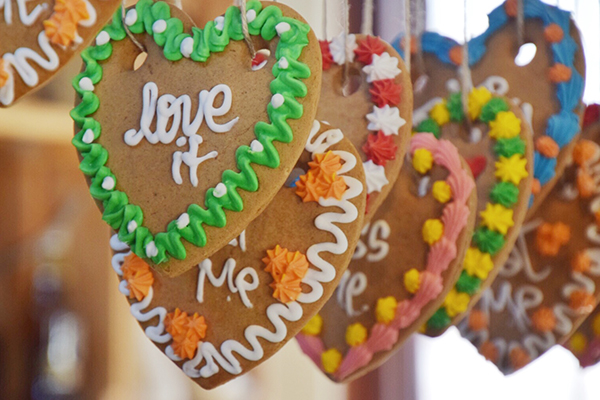 His Story:“We started our day in the bakery, where we ate gingerbread, old style sausage rolls and pasties which were yummy. The old bakery looked exactly as it would have back during the gold rush. We also got to visit Brown’s Confectionery where we watched them make orange drops the way they used to 150 years ago. It was cool to watch and I was super surprised because I don’t like lollies and these were super yummy. As were the toffee apples! But I have to say I’m grateful to live in a time where we have so many more multicultural dishes to choose from because I love trying new things.” 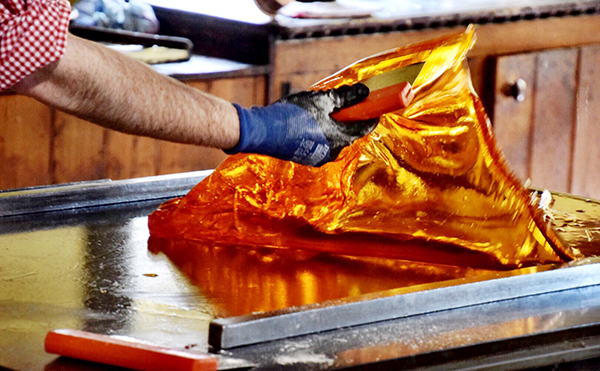 Her Story: “Fact! I love lollies. And if my mum would let me I would eat them every day. She’s a meanie and only lets me have them as an occasional treat food. I was so excited to watch boiled lollies being made at an old factory. They had big bowls of liquid sugar that they poured out and punched and folded like dough, then put through a special machine and made orange drops. They were still warm and so delicious when we got to try them. I learned that I’m actually lucky that mum lets me have occasional treats because back then, kids were only allowed once single lolly a week, and that was only if they could afford it because sugar was expensive. The other thing is they used to colour the lollies with poison and gross things like charcoal. Ewww.”

Fun and games at Sovereign Hill for families

Of course, it’s not all work, work, work at Sovereign Hill with kids. Families also get to experience the fun side of living during the gold rush, where every day was a treasure hunt. There are dress ups and coach rides with friendly draught horses, and candle making, which thrilled my crafty cuties. Raffles also loved the 9-pin bowling, a suitably noisy traditional German game in the Bowling Saloon. And, of course, after dark Sovereign Hill is transformed into an explosive immersive sound-and-light show that tells the story of the people of the Eureka Stockade, and keeps audiences entertained and on their toes. 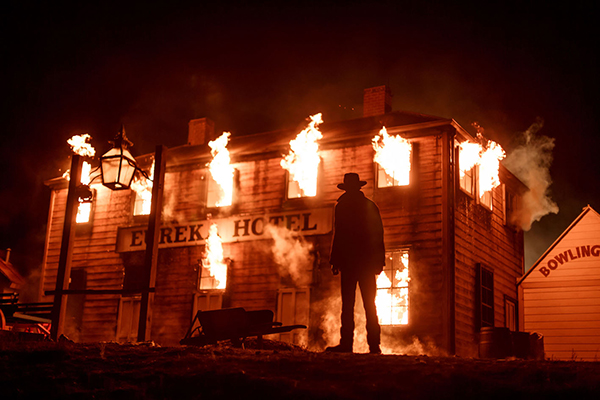 His Story: “9-Pin Bowling is a bit like 10-pin bowling, except kind of chunkier and the balls are really heavy and the pins are fatter and harder to knock over, but I really liked it. Dressing up was fun, not because I liked the clothes, I’d much rather wear a Green Day T-Shirt, but because I got to laugh at my mum in her big fancy dress and hat. The most fun thing though wasn’t a game, it was the entertainers! There was even a band who let me play with them, and though I only know Green Day and not old songs they didn’t really mind. At night there is a show called Blood on the Southern Cross where the whole of Sovereign Hill is turned into a 3D movie screen with lights and sounds and special effects like flaming carriages and explosions. It was epic, and I learned all about how hard life was during the gold rush and how the Eureka Stockade happened. Life seems pretty simple for us in comparison.” 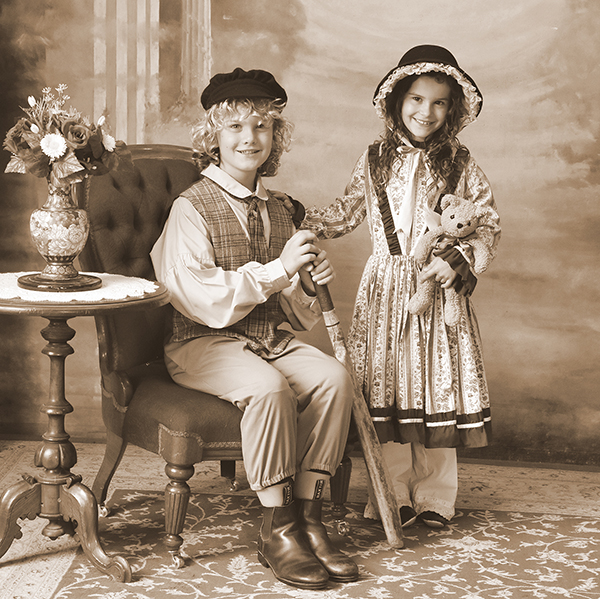 Her Story: “I loved dressing up in old-fashioned clothes like the kids wore in the olden times when my mum was young (because apparently, I am 170-years old). I got to wear a bonnet on my head and a frilly dress and funny long pants and petticoats and pretty shoes. I also liked riding in the carriage with the big horses, they were friendly and I could pat them. But my favourite thing was making candles because I learned how to make a rainbow candle using only three colours and mine turned out to be so pretty. I think there are a lot more toys these days because they didn’t have K-Mart back then, only shops that sold wooden toys and stuff, but I liked that the kids played outside and made up their own fun games”.

Disclosure: We were hosted during our experience of Sovereign Hill for families, but as always, all opinions, lolly eating, gold digging and ye olde world antics are our own.