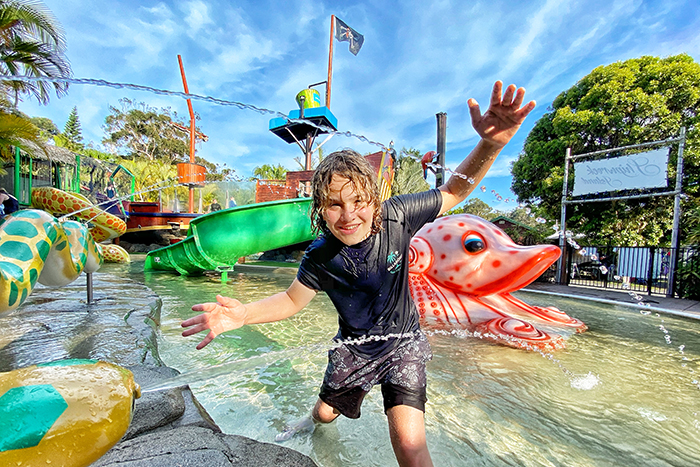 Sure, we expected sun, sand and sea but we didn’t expect pirates! Two of them, as fierce as can be, lurching around a shipwrecked galleon, battling the twisting tentacles of a kraken and the blasts of water cannons.

OK, so the pirates are small and BYO, but NRMA South West Rocks Holiday Resort’s Shipwreck Island Waterpark has unleashed the inner swashbuckler in both the kids, so I take cover on a lounge under a rather convenient umbrella while they plunder the waterpark. 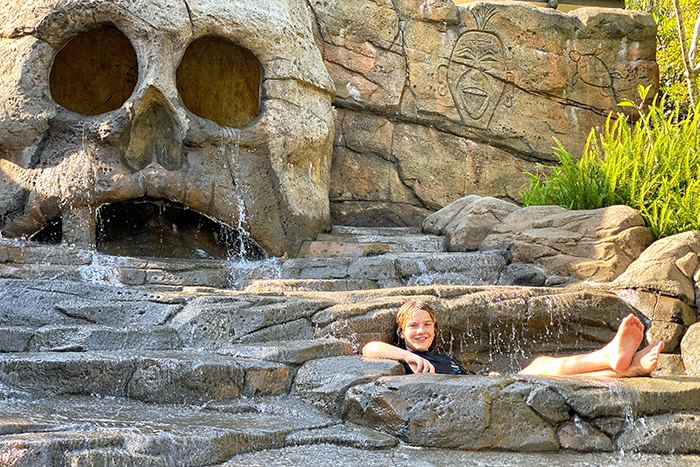 An hour’s drive north of Port Macquarie along the mid north coast of NSW, NRMA South West Rocks Holiday Resort integrates a five-star resort experience into one of Australia’s most pretty locales, though with a family-friendly price tag. One of the best of the caravan parks in South West Rocks, it is a family holiday heaven. 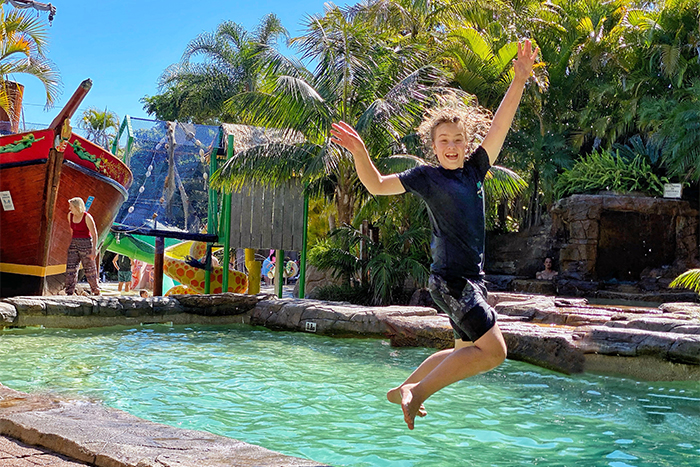 When the kids aren’t rampaging through Shipwreck Island or cannonballing in to the pool, they’re leaping on the giant jumping pillow, swinging through the playground, whacking tennis balls around the court, and putting around the mini golf course. The also find time to play the worst game of pool I’ve ever seen attempted by two humans in the convict themed games room. Luckily there’s also a ping pong table, which they fare way better at. There’s even a kids club that, come summer school holidays, will host a series of cultural and craft sessions with local Dunghutti people. 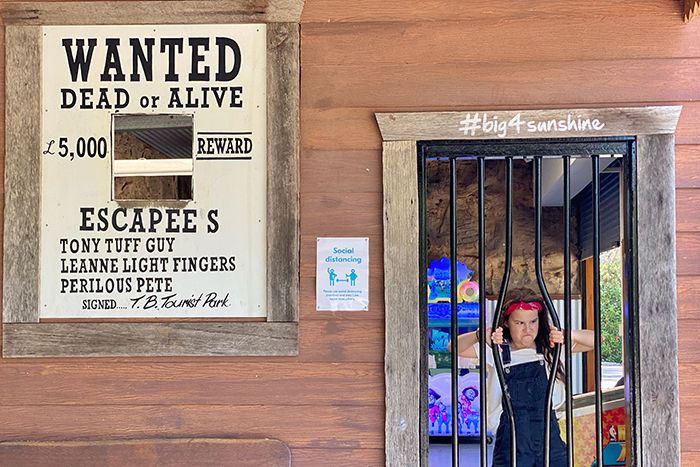 The park boasts18 accommodation types, from powered and unpowered camping and caravan sites right through to glamping tents and luxury villas. We’ve gone top of the line and are staying in one of the seriously sexy two-storey Ngurra Lodges. 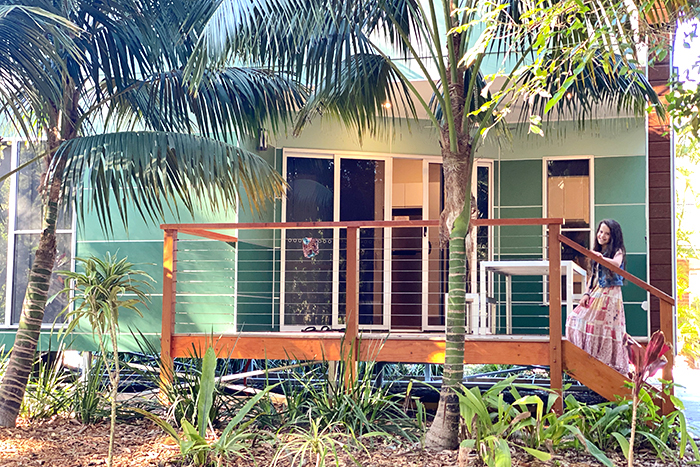 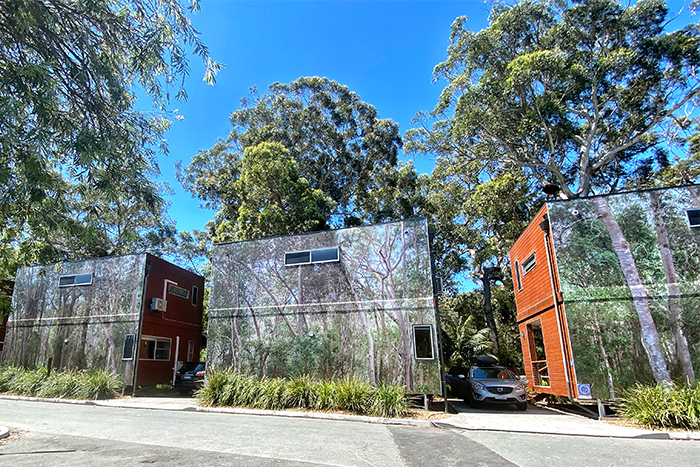 Adorned with a two-storey photograph of the melaleuca and banksia trees they overlook, the lodges are so cleverly designed they seem to disappear into the bush as if they are wearing Harry Potter’s Cloak of Invisibility, at least according to my daughter. 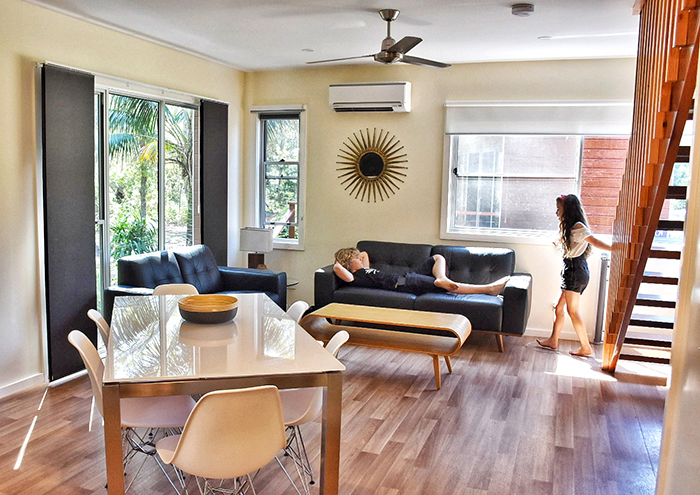 Inside, the design is equally impressive with huge windows and sliding glass doors that invite the bush in to the two upstairs bedrooms, one with a marshmallow soft king-sized bed, and the other with bunks and twin singles. Downstairs is luxurious open plan lounge and dining with heaps of room for the kids to spread out, at least there would be, if said kids could actually stay inside and still for more than five minutes. 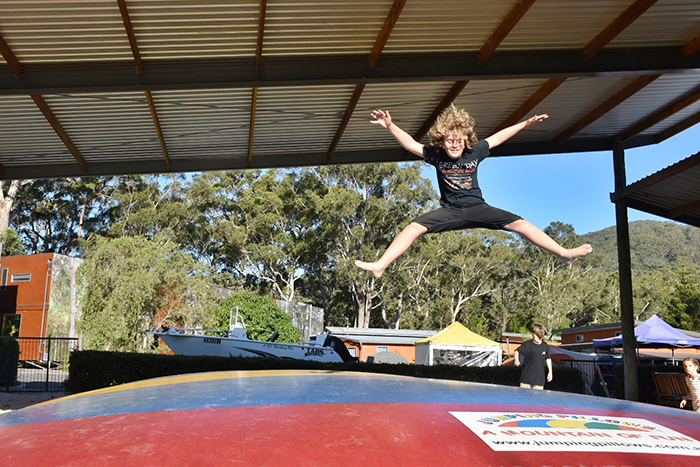 You see, a holiday park stay affords us the chance to let the kids off their proverbial leashes … something we rarely feel safe to do on holiday. But the safe sense of community within the boundaries of the South West Rocks caravan park means we can set them free to play and make new friends without the lurking shadow of their adults. Of course, there are actually more sets of eyes on the kids than ever, including our own, but they don’t know that as they roll by in pedal karts convoy with their new crew. 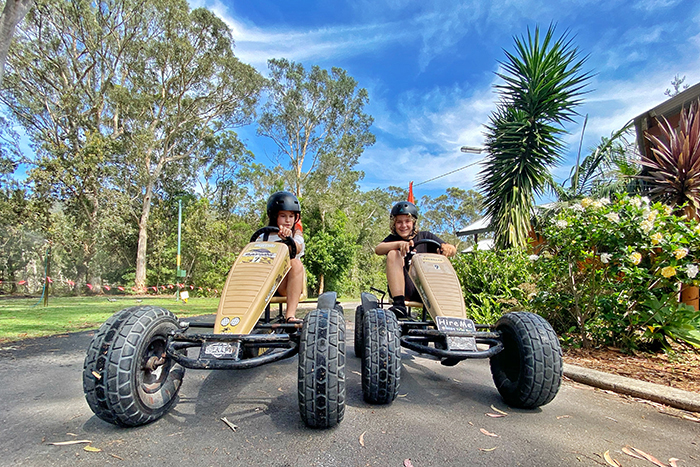 When the sun finally dips below the horizon and the kids return from their ratbaggery for an al fresco dinner, we’ve been joined by more visitors. A kangaroo hops right up to our veranda to soak herself in the fawning adoration of my children. 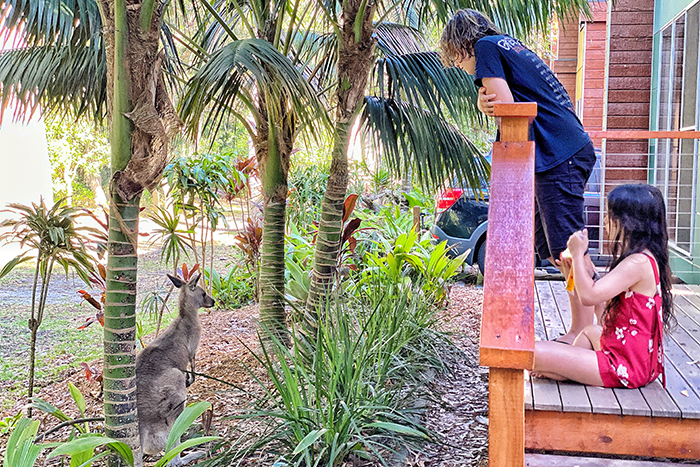 More cooing bursts forth as a cute-as-a-button joey wiggles his feet clumsily out her pouch, so tiny he appears to still be working out the physics of marsupial exit and entry. 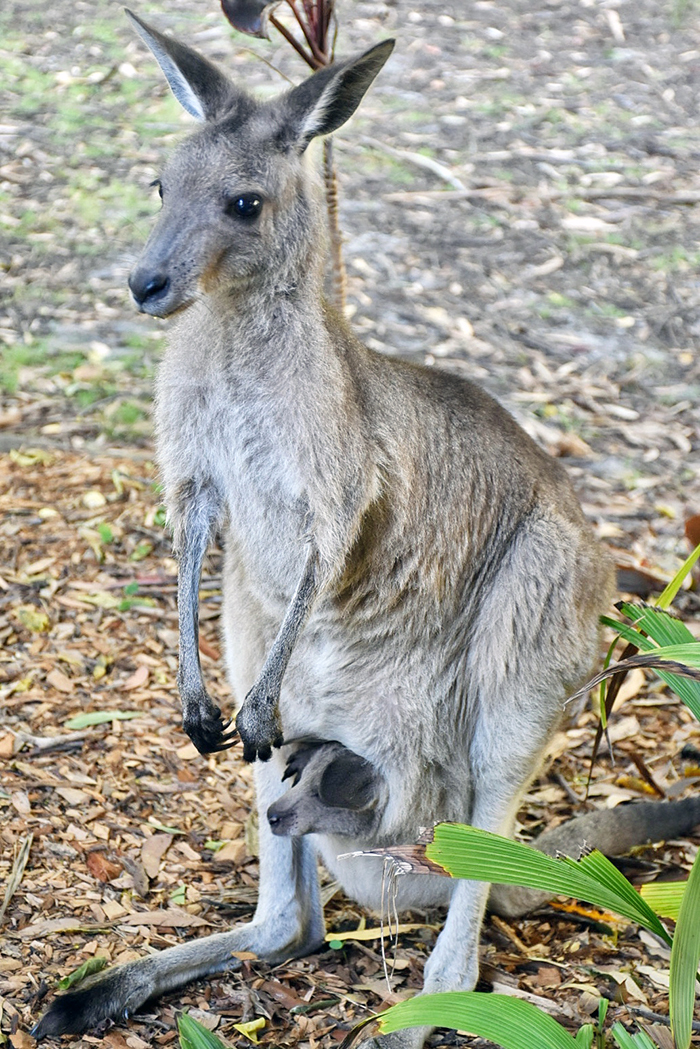 Sunrise sees Sugarpuff and I set off to the fairy garden in search of magical creatures. As butterflies flirt with streams of sunshine, it’s easy to imagine they’re actually fairies, such is the magic of the moment. 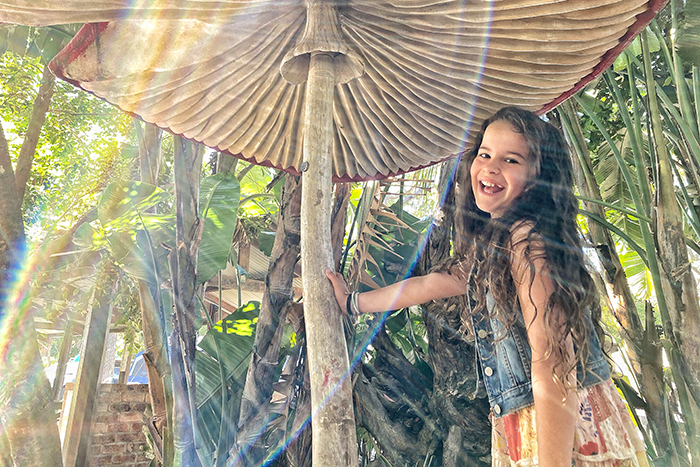 Tinkerbell and I meet the boys for a barbecue breakfast in the camp kitchen, then kit up for a little kayaking on the resort’s private lagoon in search of Captain Hook. 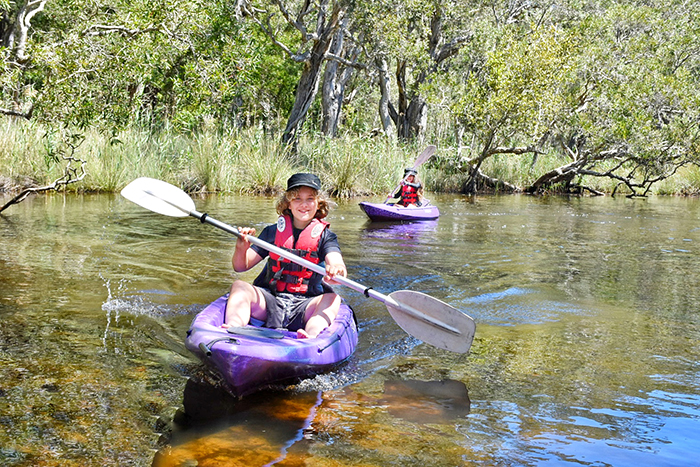 Of course, there are more watery adventures to be had outside the boundaries of the park, including South West Rocks many irresistibly sun-soaked beaches and waterways. Main Beach and its scattered rocks, conveniently located right next to a fish and chip shop and Chillati Gelato, proves popular with our kids, but it is paddle boarding and splashing about in the waterways of Back Creek that they love best of all. 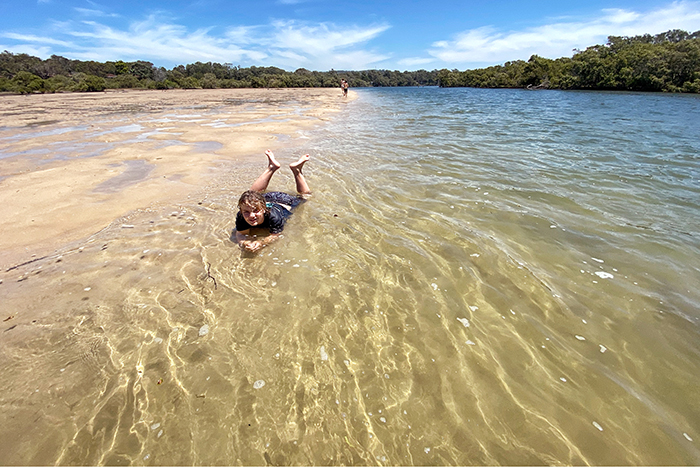 While nature headlines in the picturesque hamlet of South West Rocks, there are some amazing historic man-made support acts, including historic Trial Bay Gaol and the gorgeous Smoky Cape Lighthouse. 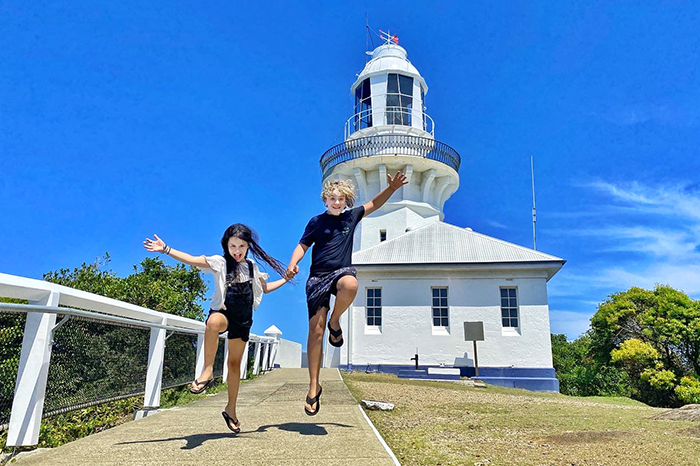 But for this family, the real star of this holiday show is NRMA South West Rocks Holiday Resort and its chorus line of kid friendly activities and piratical marauding in Shipwreck Island. 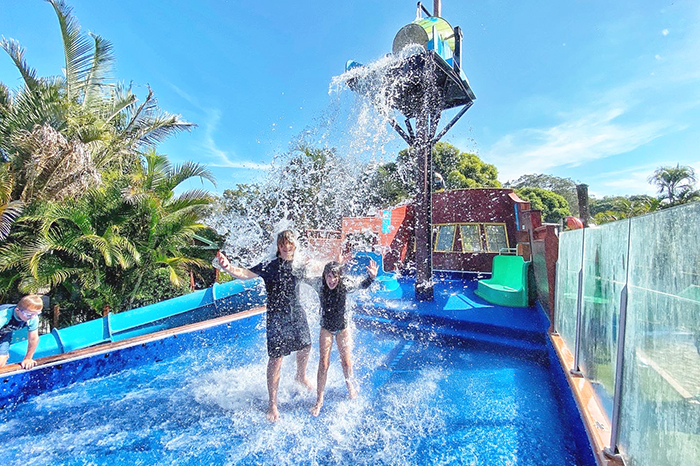 So much so that the kids are already tossing up whether to return or plunder another one of NRMA Holiday Park’s 33 East Coast holiday parks.

Disclosure: The BoyEatsWorld family were guests of NRMA Holiday Parks, but all fairy flirtations, swashbuckling and opinions are our own.