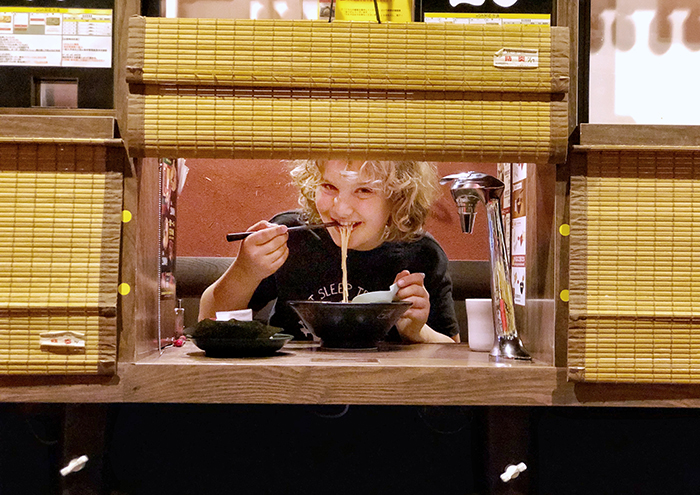 Safe, clean and unapologetically oddball, Tokyo is a city where ancient shrines sit small but proud under the shadow of towering neon skyscrapers, and tranquil gardens share the same address as crowded and crazy shopping strips. Add a hefty scoop of samurais, ninjas and sumo wrestlers, a sprinkle of Hello Kitty and a pinch of Pokémon. Then toss in a punctual to the second network of trains, the best food and the politest people on earth, and you have all the ingredients for a destination that leaves families breathless and begging for more.  A lot more.  So much more that we’re clocking up our fourth visit in as many years.

So where to go and what to eat this time around?

We’ve already made the pilgrimage to Meiji Shrine and ticked off sensational Sen-soji more than once. We’ve scrambled over Shibuya’s iconic crossing, seen Sumos in Ryogoku, been blinded by science at Miraikan, gotten neighbourly with Totoro at the Ghibli Museum, and watched robots wrestle in Shinjuku. We’ve even hung with the cool kids in Shimokitazawa and shopped for guitars in Ochanomizu. And, of course, Sugarpuff has managed to accumulate more crazy kawaii cuteness than we have space in our house, and Raffles has scoured the streets of Tokyo in search of food and more than consumed his body weight in sushi, sashimi and yakitori.

Hint: If it’s your first time, we recommend planning to stay at least five days in Tokyo. 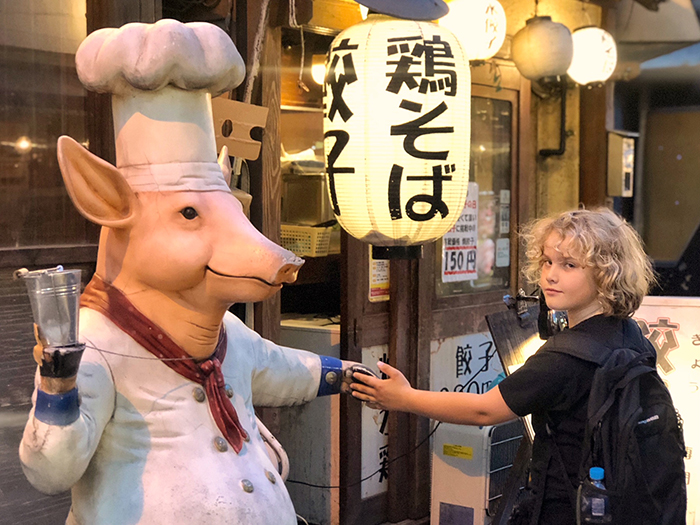 But while we’re more than happy to do it all over again, I have to admit that we’re suffering from a mild case of the been there eaten thats.

That is, until the crowd parts to reveal Mark, a knight in shining sneakers who has come to rescue us from our malaise with a tasty take on the city, uncovering inside secrets and local eats beyond the tourist haunts.

Mark is one of the expert local guides from Inside Japan Tours, an award-winning small group tour company that offers fully tailor made tours of Japan. The tours are all encompassing, covering all the main attractions, if that’s what you desire. But if it is not, they can sort you out with that too.  You see, Inside Japan Tours has hidden superpowers in the form of expert guides who live local and are able to use their x-ray vision (or inside knowledge) to reveal Japan’s hidden haunts and inside secrets.

Mark already knows where we’ve been and that, while we’re in search of culture, history and don’t mind a bit of biff and a touch of the bizarre to boot, our travels tend to have a sharp focus on filling our bellies. So, he’s planned a special itinerary so we can do just that.

On past visits we’ve inhaled copious bowls of steaming noodles at Tokyo Station’s Ramen Street, tackled golden tempura in Ginza, scoffed sushi and sashimi at Tsukiji Market (now closed). We’ve devoured skewers of yakitori in Shinjuku, slurped chubby udon noodles and hoovered up all the yaki’s – Teri, Teppan, Okonomo and Tako. During one visit I even challenged myself to shovel 24 dishes into my copious trap in 24 hours (an experience I’d advise you not replicate unless you really hold a grudge on your digestive system).

But this time we’re skipping the tourist strips and have tasked Mark with helping us to eat where and what the locals do.

We get our fill of sensational soba noodles with the Salarymen in Kanda. Home to one of the last pockets of pre-World War II Tokyo, the area is filled with tiny wooden restaurants run by sixth-generation noodle specialists and we’re just about the only tourists around. 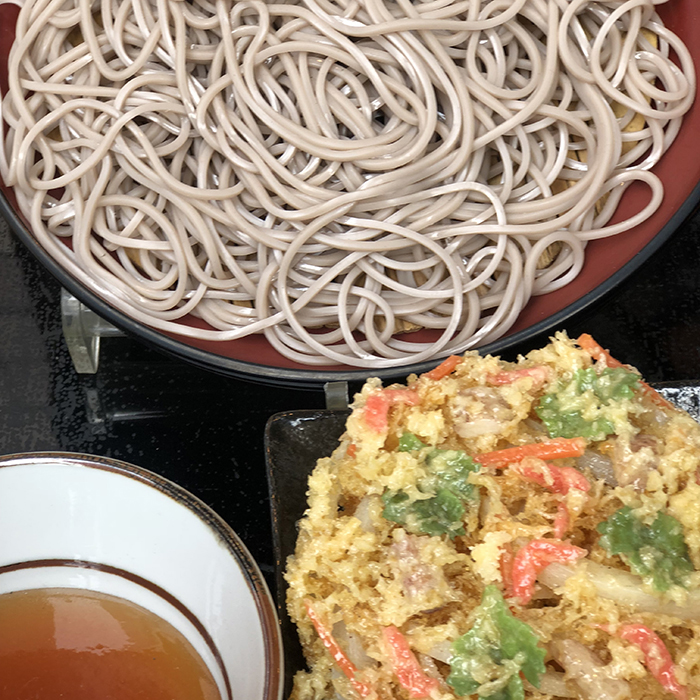 Mark then steers us towards low rise Nakano, one of the tastiest secrets in Tokyo. In Nakano we dodge the multitude of manga and anime stores and dive straight to the basement of the bustling Nakano Broadway. 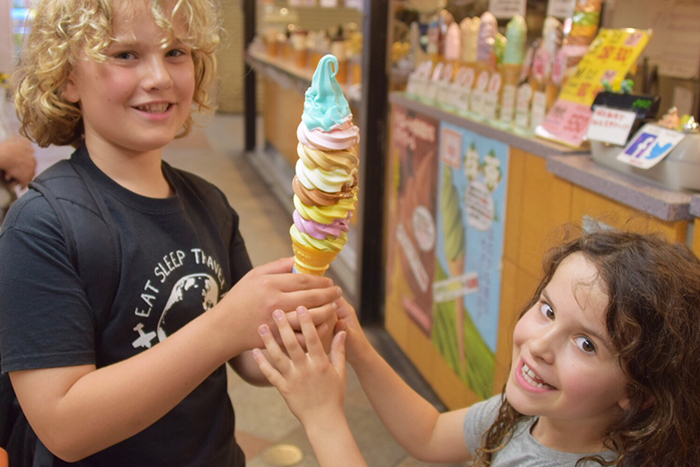 Then we dive in with the locals shopping for fresh groceries, the freshest and cheapest sashimi and enormous meat-filled steamed buns and dumplings. We decide we’re never leaving. That is until Mark mentions the magic word. Ramen.

We exit our underground food lair to slurp our way loudly through a perfect bowl of steaming tonkatsu ramen at insanely popular chain, Ichiran. 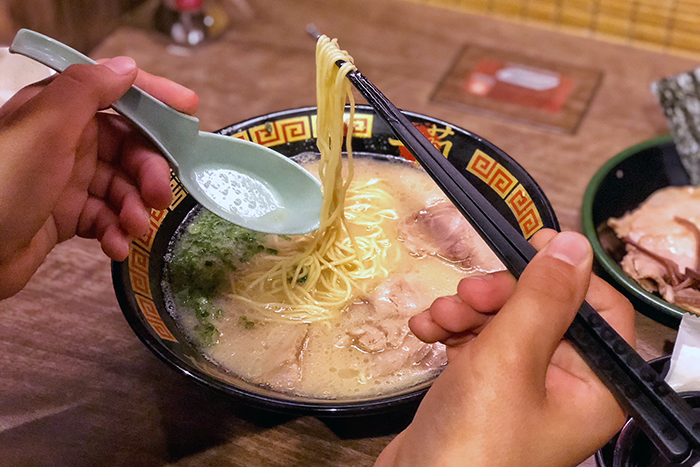 It’s a mysteriously anonymous process. First you order from the vending machine at the door, then you seat yourself in your own little booth (the little dividers can be removed if you’re with pals) and fill out an order form, so your ramen comes just the way you like it.  A disembodied hand appears from behind a curtain to take our tickets and instructions and I can’t help but think of The Addams Family’s Thing when it returns to serve up a swimming pool size bowl of pork-based ramen, chockers with perfectly cooked noodles and topped with slices of pork and egg. We’re surprised a chain restaurant can deliver something this good and Raffles, quite the ramen aficionado, gives it two thumbs up between happy slurps.

There’s more ramen to be devoured at Shinigawa Shinatatsu. Less touristy than its Tokyo Station equivalent, Shinigawa’s Ramen Lane boasts an astounding selection of ramen shops all in an aromatic row. Each of the eight ramen experts proffers a different take on the delicious noodle dish. Having already inhaled a tonkatsu, Raffles decides on Tetsu, which specialises in chashu tsukemen, a wildly popular variety of ramen where hot soup, chilled noodles and accompaniments are all served separately. 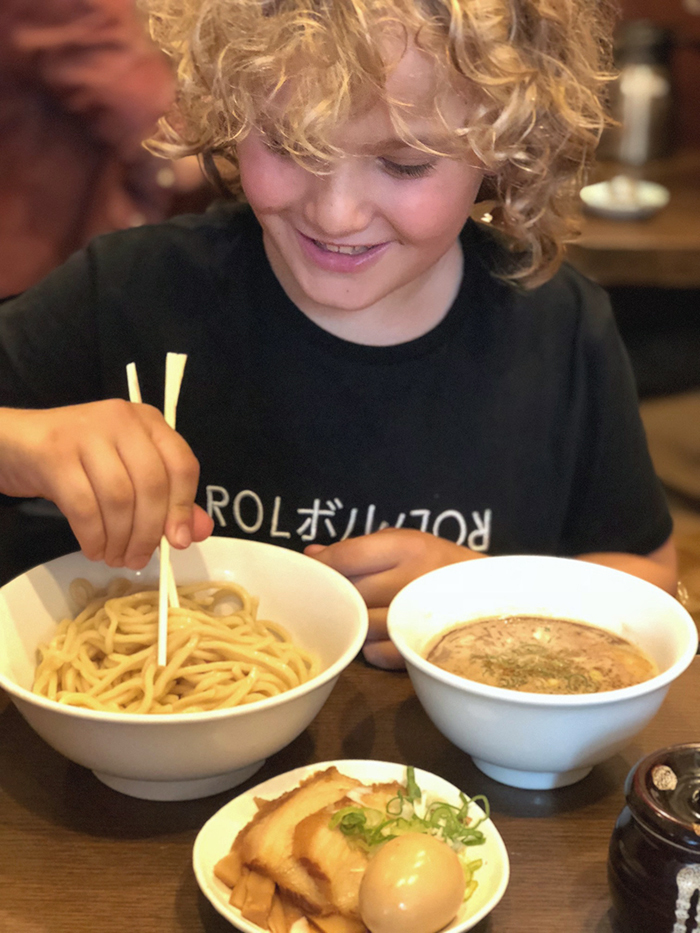 Raff dips his chilled noodles into the rich and salty hot soup before smashing them down. It’s another thumbs up from him.

CHICKEN WITH A SIDE OF SUPER POTATO

Though I’m fit to burst, Raffles always has room for more, so Mark decides to race us to another of his favourite insider foodie secrets. When our cab pulls up to a nondescript street in Ikebukuro, we’re a little confused. But there’s culinary magic waiting just a few hundred metres away. 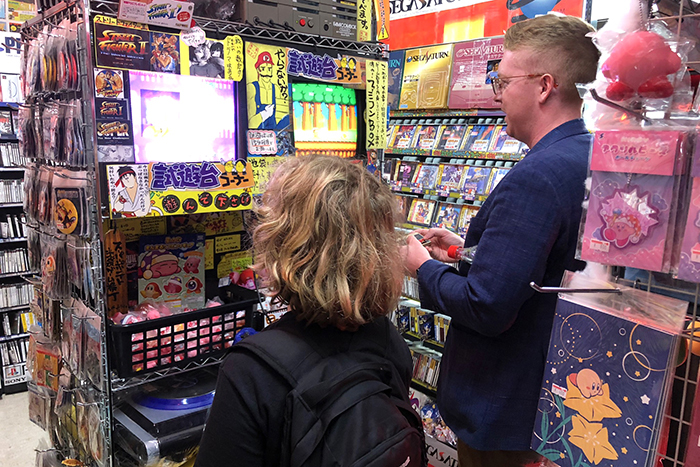 The kids are all kinds of besotted with the store and after a little retro game play start getting a little too comfortable. Mark, having quickly worked out how Raffles works, simply says “chicken” and my walking stomach is soon racing back down the stairs, past an enormous inflatable Super Mario Brother until he stops with Mark in front of hole-in-the-wall Tenka Torimasu. 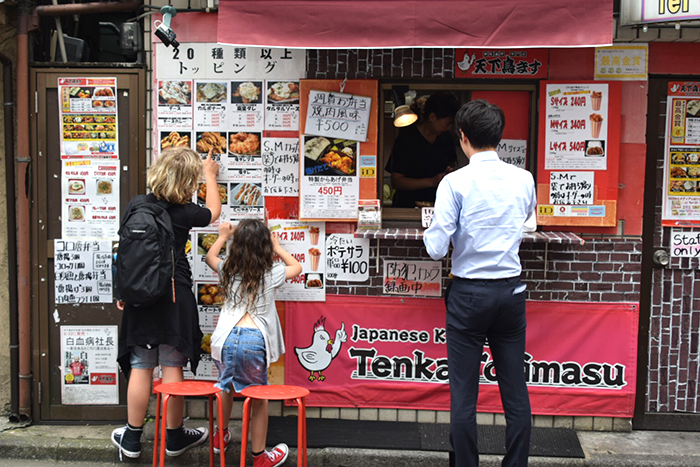 They order a couple of cones of kaarage (Japanese fried chicken), one smothered in mayo and the other in a sweet Japanese plum sauce. 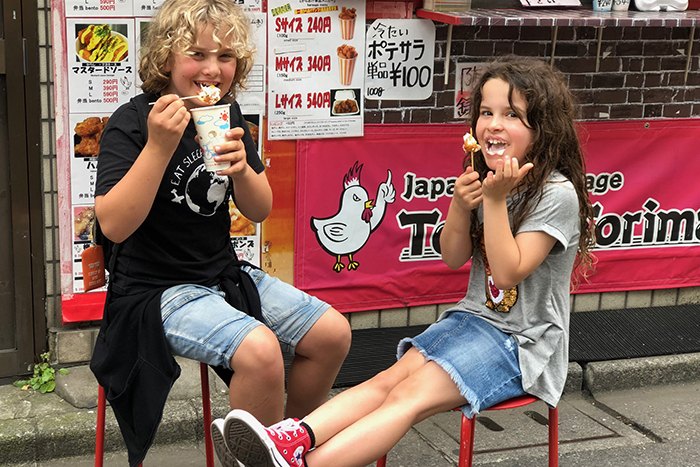 The chicken is so crisp, so succulent and so damned tasty that we both go back for more.

The eateries we visit aren’t particularly flashy, some are even part of the chains we usually avoid, but what connects each, beyond the deliciousness of their offerings, is that we’re the only tourists around and are enjoying a true taste of Tokyo, insider style.

Disclosure: While we were hosted by the awesome team from Inside Japan Tours, all ice-cream licking, noodle slurping and opinions are our own.