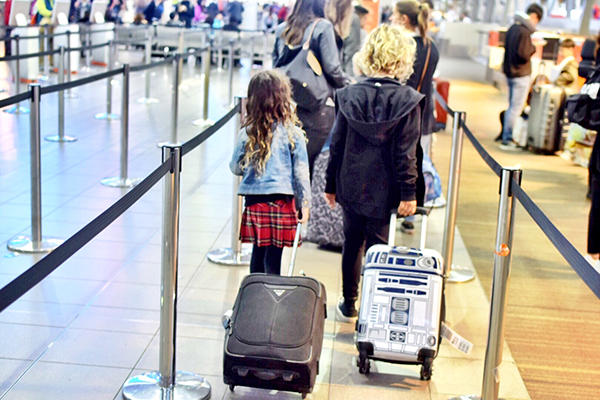 “A long time ago in a galaxy far, far away, travel for Mr Eats World and I meant finding a bargain deal for a random destination, chucking a handful of clothes, a camera and a toothbrush in a backpack and buggering off. But when two became three, booking a holiday suddenly required actual thought and planning, and to be frank, had me soiling my wrinkle-free, quick-drying, lightweight, high-performance cargo pants.

But since that first family adventure, through four climates and four time zones with as many suitcases in as many weeks, we’ve racked up several hundred flights with a baby, a toddler or a tween in every imaginable combination, and have picked up a tip or two along the way.  In fact, so well behaved are Raffles and Sugarpuff in the sky that we often consider living on a plane. That’s partly due to dumb luck, partly to experience but mostly due to sensible planning.

So for the sake of your sanity, here we are sharing our 9 tried and tested tips for flying with kids … 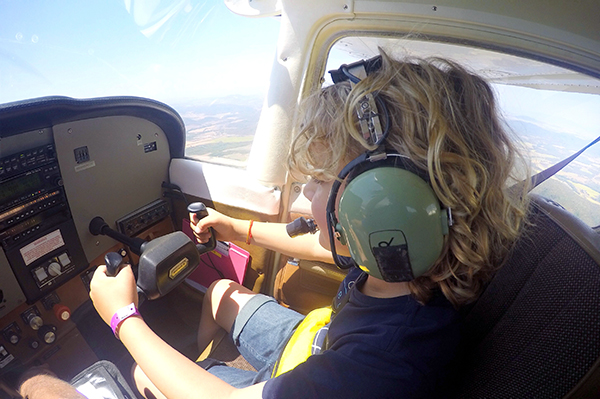 Don’t assume the airline will have you all seated together. Unless one of you is actually flying the plane. We once had an eight-hour flight out of Asia where our entire family was separated, including our three-year old, who was seated a ridiculous five rows out of reach of either of her parents.  It took an hour of me screaming and almost causing an international incident to get each of our kids seated with a parent. When you’re booking, it is absolutely worth paying that extra few dollars to select your seating, unless you actually want your kids scattered from one end of a jumbo to the other. And never sit a young kid, or their octopus like arms and legs, in an aisle seat as the food and beverage cart, and the hot beverages it ferries about the cabin, can be an accident waiting to happen.

2. The early bird catches the plane 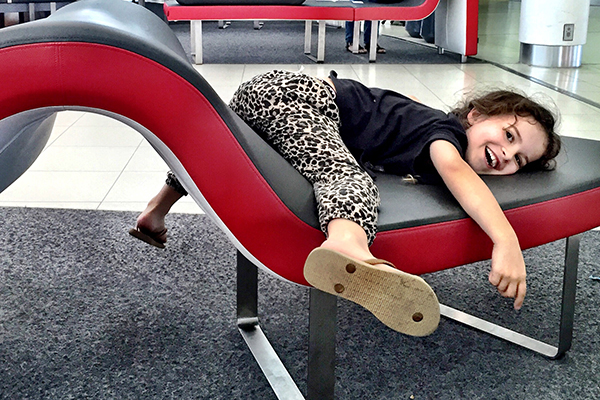 Here are two facts. Flights get delayed. Kids get bored. Combining the two can result in shitty behaviour, from parents as well as kids.  If you want to avoid the possibility of tantrum inducing boredom, we suggest flying as early in the day as possible as early morning flights are much less likely to encounter delays. It is also wise to allow extra time for checking in for your flight as kids need time to faff, flounce, wander off and chuck the occasional tanty.

3. Leave the baby steamrollers at home 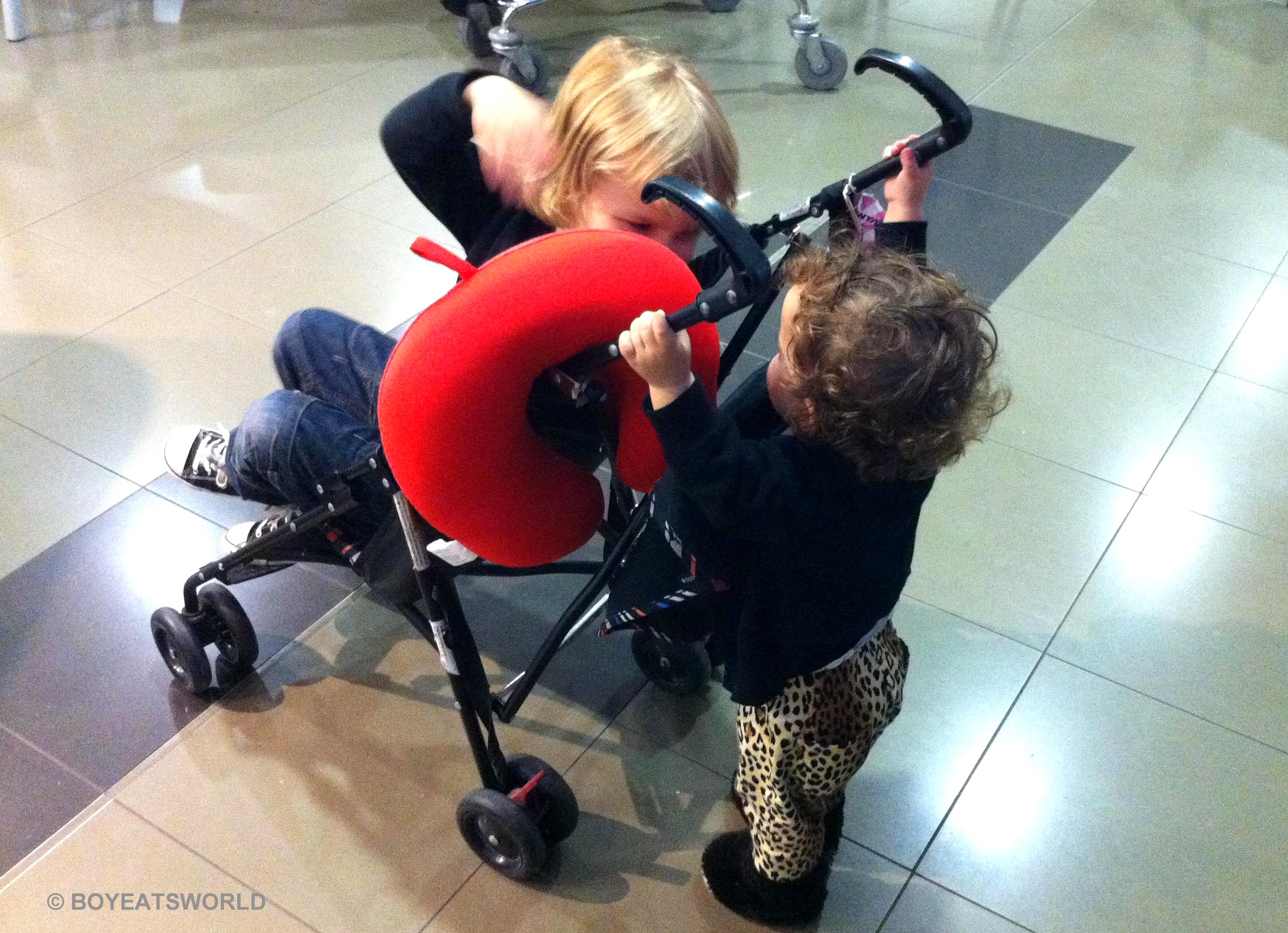 Most airlines will allow you to keep a lightweight umbrella stroller with you until you board your flight. Note the emphasis on the lightweight. Leave your eight-metre wide Hummer-pram hybrid at home – not only because it will be extraordinarily inconvenient in a crowded airport, but because it’s only going to go in the hold and become more burden than benefit. If you’ve got a tot in tow, a baby carrier will be your freaking saviour. Not only will one free up your hands for handling tickets, passports and other children, they also come in handy for calming unsettled tots on the plane. 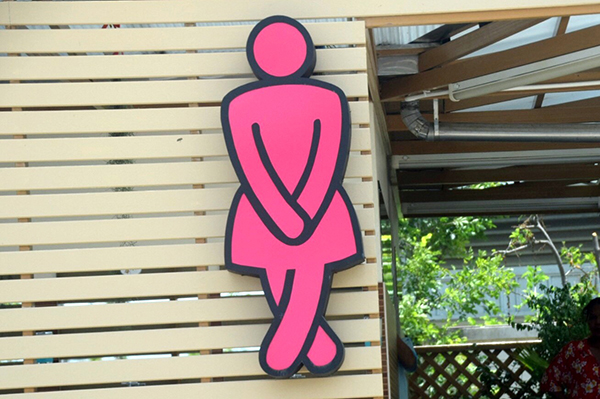 Children have an uncanny ability to never need a toilet when presented with one. But given your little piss takers have hummingbird-sized bladders and an ability to hold on equal to that of one of those tipping bucket thingies at a water park, they’ll need one exactly 30 seconds after the option is no longer there. Make sure they go immediately before boarding, again before they sleep and, yet again before landing. And you’ll have remind them to go at regular intervals or you’ll end up swimming to your destination. And don’t feel bad about sticking toilet trained younger kids in pull-ups for a long flight…  it’s a heck of a lot less stressful than having them squirming when the seat belt sign goes on. 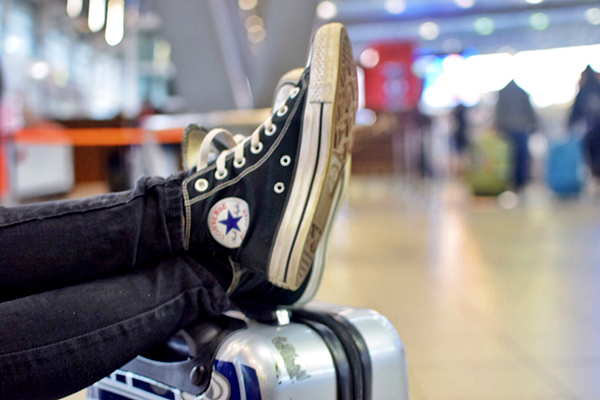 This is not the time to dress your children in their fanciest frocks. Our rule is layered sloth all the way. An uncomfortable child is an unhappy, fidgety child and the fastest track to a major meltdown, so chuck them in the finest trackie daks and rejoice in the quiet of their comfort.

6. Let me, or Netflix, entertain you 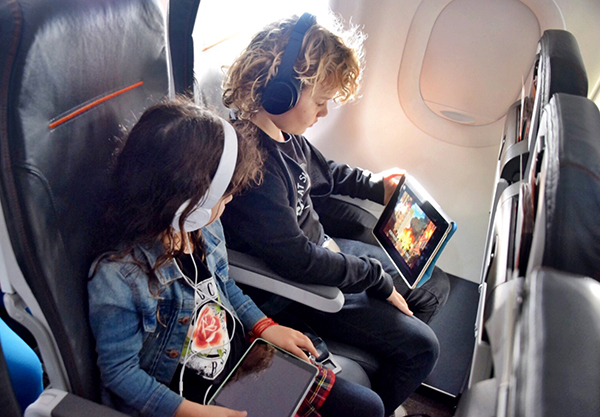 Let me state the obvious. Kids get easily bored. We pack each of our kids their own plane bags with the stuff they can’t live without. Though we now take responsibility for them off the plane as children have a heart attack inducing habit of losing the bloody things in airports (I’m looking at you Raffles).  We ensure each bag is packed with enough entertainment to keep them busy for the duration of the flight, taking into account random mood swings and a child’s inability to focus on one thing for more than eight seconds at a time. Essentials include a book, notepad and pencils, headphones and a fully loaded tablet, each.

We find computer games have a tendency to get the kids agitated which is the last thing anyone wants at 30,000 feet, so our sanity saving go to is Netflix. We download the kids favourite movies and series, like Trollhunters and Spirit: Riding Free, and the result is instant silence for the duration of the flight. Our other tip is to pack your own noise cancelling headphones and download a little something for yourself, so you won’t hear them whining when their batteries run out. Marvel’s The Defenders is a good choice for parents because you can pick up a ninja move or two to keep the kids under control if they do start to muck up.

7. Do feed the animals 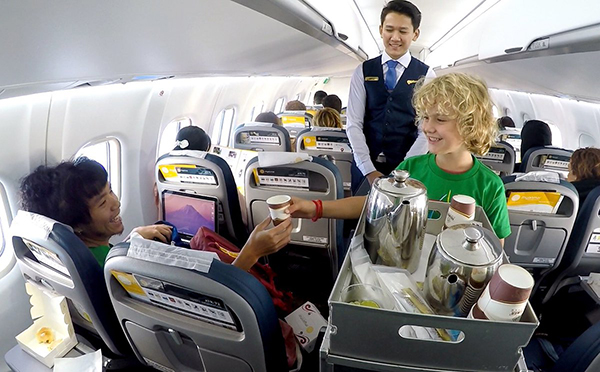 Make sure you pack snacks. You’ll need enough to keep them going for the duration of your flight because the airplane meal that interests a child has yet to be invented. Snacks are especially important if you have a kid like Raffles who’d eat a flight attendant if he didn’t get fed at regular intervals. 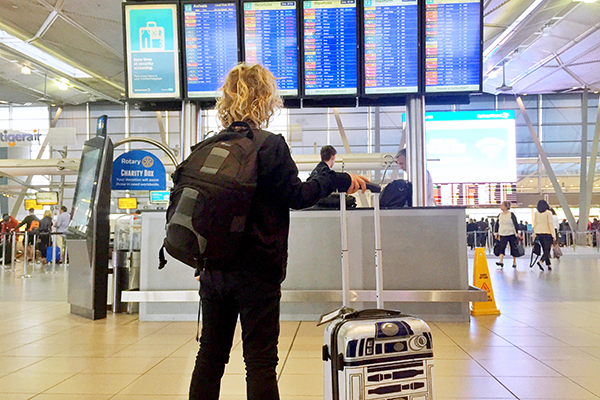 Make sure you fly with realistic expectations. Kids can be fractious, argumentative pains in the arse even at home, so why expect them to turn into a Stepford child when you’ve got them shoved in a small space with nowhere to move for hours on end? Throw out the rule book. No matter what your parenting philosophy, be prepared to negotiate, soothe, and bribe your kids to your destination.

But do remember, even if they are absolute angels from take off until landing, there will always be one of those self-entitled loud mouth passengers who won’t see the irony in the fact they’re complaining loudly to anyone who’ll listen about the merest hint of a whisper from a child. While you may be tempted to retort or try out one of the aforementioned ninja moves you picked up from watching Marvel’s The Defenders, do not engage. Instead focus on your child and remember that most people are nice.  And those who aren’t so nice? Stuff ’em!