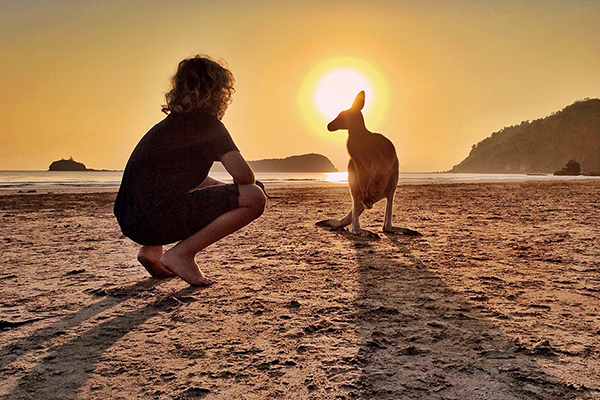 Sometimes you can’t help but paint a picture of a destination in your mind after drooling over thousands of amazing photos (taken by professional photographers who happened to be there at the exact right moment on the exact right day with the exact right filter). But then you arrive at said destination and well, the place is meh, at best, and leaves you entirely underwhelmed.

Let me assure you, Cape Hillsborough, about a 45-minute drive from Mackay, is definitely NOT one of those places. In fact, it’s the kind of place that exceeds every expectation and leaves you wanting more, and wondering why more people aren’t shouting about it very loudly from the rooftops.

So let me set that to rights by climbing on to my own virtual rooftop and shouting, very loudly, Cape Hillsborough is extraordinary.

Best known for the forested slopes of its steep rugged headland, Cape Hillsborough is an untamed beauty strewn with creeks, beaches, waterfalls, cliffs and rock outcrops full of caves and overhangs. It’s also home to Wedge Island, the most accessible island of the Great Barrier Reef, which you can reach on foot when tides permit. 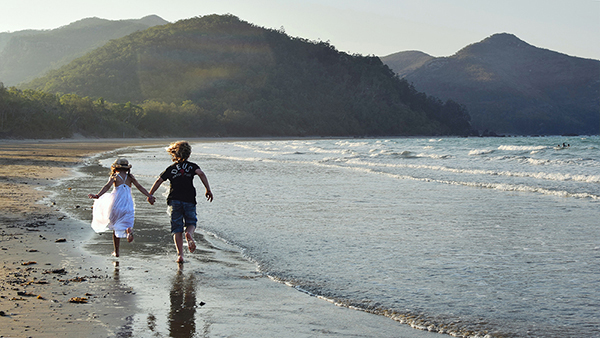 There’s also a shed load of wildlife, including around 140 species of native birds, snakes and lizards. Something dramatically demonstrated by the white-bellied sea-eagle who swoops down about 50-metres in front of us to scoop up a snake in its talons and fly off into the sunset, its slithery prey dangling unhappily below.  You’re also likely to stumble across possums, a variety of butterflies, a mob of wallabies and a couple of rogue Eastern Grey Kangaroos. 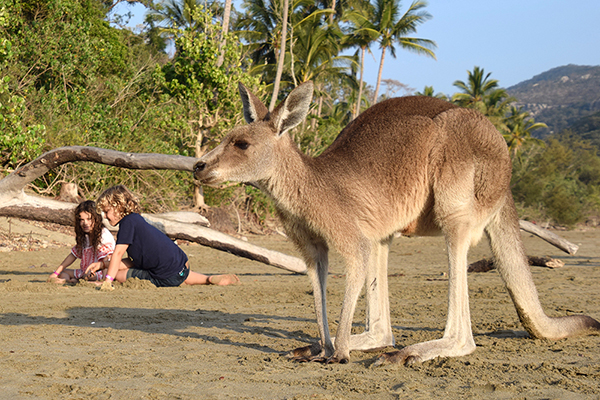 If you time your visit to  right, you may even get lucky enough to spot a passing whale or encounter flatback and green turtles laying their eggs on Casuarina Beach, or their hatchlings heading off to the ocean. Oh, and then there’s the estuarine crocodiles and box jelly fish, so you may want to keep your wits about you.

To make the most of our visit we’re staying overnight at the Cape Hillsborough Nature Tourist Park, right on Casuarina beach. Run by the warm and welcoming Renae and Ben and their three kids, this place is an eco friendly rustic haven for families. When the kids aren’t madly mini golfing or launching themselves into the pool, we head off on a series of wilderness walking trails, and stroll down to explore the long stretch of Casuarina beach in the golden afternoon light. 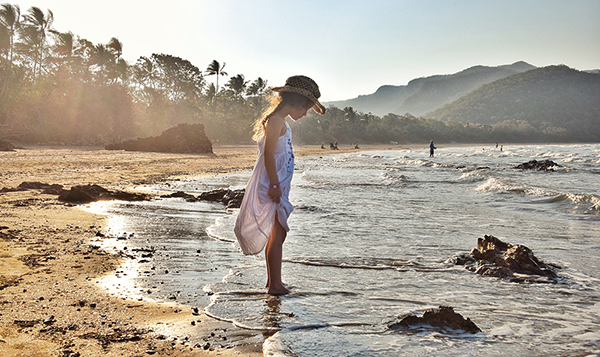 This is Sugarpuff’s idea of paradise. She is lost in her own world, gathering shells and rock until, unable to resist the siren song of the sea, she begins frolicking in the waves with all the passion of a modern-day Moana. 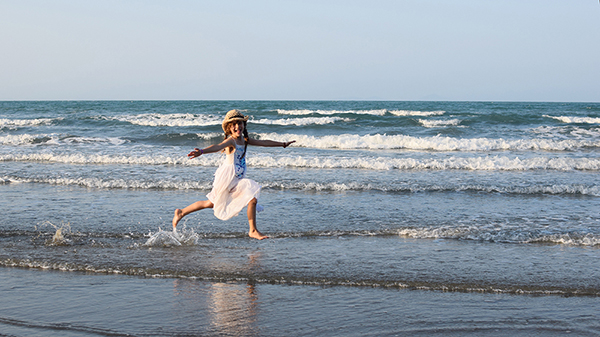 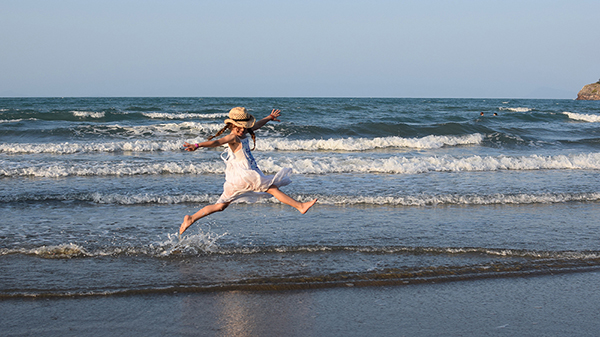 Luckily super sibling Raffles is but one step behind ready to herd her safely out of the surf. 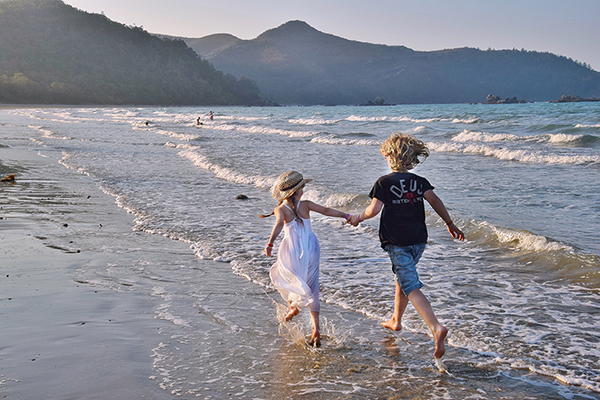 We trip over a random roo or two on our way back to the Tourist Park’s well stocked store where we nab a barbecue pack (plus a six pack and some wine, pretty much guaranteeing we’ll be totally witless if confronted by any box jelly fish or estuarine crocs who happen to be barbecuing dinner for their families that night).

Mr Eats World cooks it up on the conveniently croc-free communal barbecue located right outside our cabin, while I whip up a little salad in our kitchenette and set the table on the verandah. The kids gobble the food down at lightning speed because, rumour has it, it is movie night at the Cape Hillsborough Nature Tourist Park. My boss babies soon have us marching up to the outdoor cinema where, after nabbing some popcorn, they settle down to watch the celluloid Boss Baby with the new friends they’ve made during our day, while we natter with ours over a little more wine.

While life at Cape Hillsborough Nature Tourist Park is relaxed, don’t expect a sleep in because you’ll be getting up early, stupidly early, to see Cape Hillsborough’s star attraction, a famous mob of marsupials.

Headlined by two spotlight hogging kangaroo’s, Emmy-Lou and Bridget, these megastar macropods arrive at Casuarina Beach every morning at sunrise to forage for seaweed and seed pods as the sun pokes its radiant face out over the horizon to breathtaking effect.

The girls, and their co-stars, the Agile Wallabies, are quite used to people but are still wild animals, so we don’t touch and leave any interaction entirely to them. 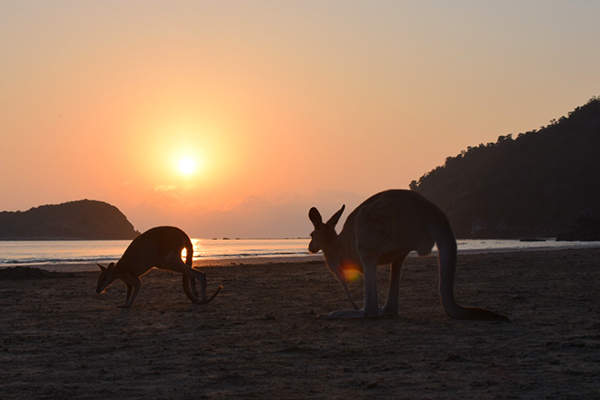 Sugarpuff/Moana proves particularly adept at ignoring them, returning to the sea for more splash dancing as soon as we set foot on the beach, but it doesn’t take long before kanga curiousity gets the better of her and she joins us on the sand to meet the roo crew. 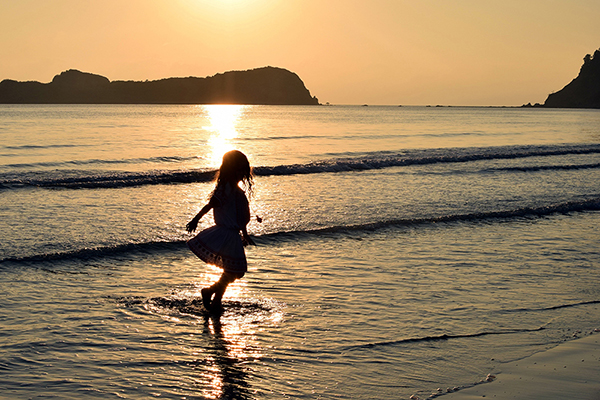 While the wallabies are a little shy, Emmy-Lou and Bridget are anything but. After they’ve eaten their fill, they waltz straight into the crowd, stopping only to pose for photos like they are walking the red carpet. Again, we don’t approach them, but we don’t need to because like true professionals they stop for their fans.

They wax philosophic with Raffles. 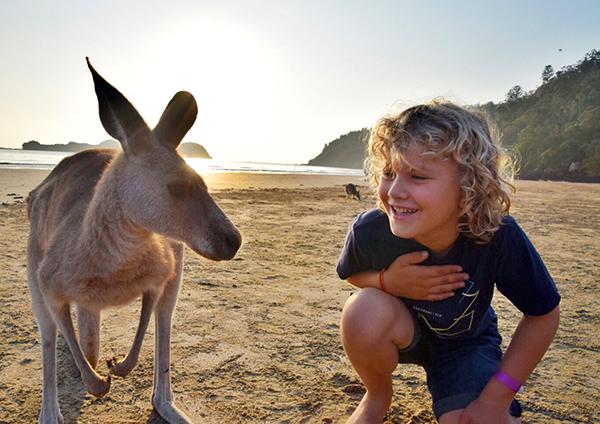 They strike a pose with Sugarpuff. 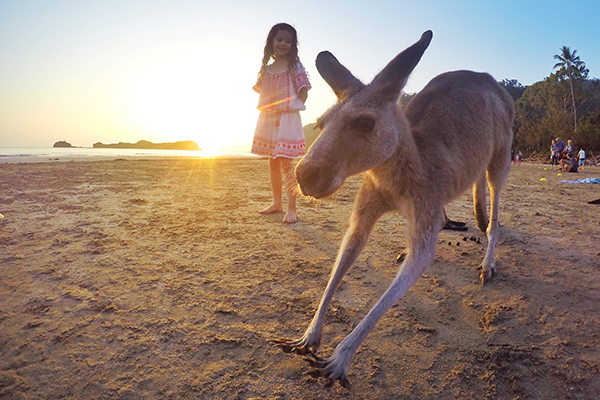 They even come in for a few extreme close ups while I snap away (I guess they’re not too worried about wrinkles or bad pores). 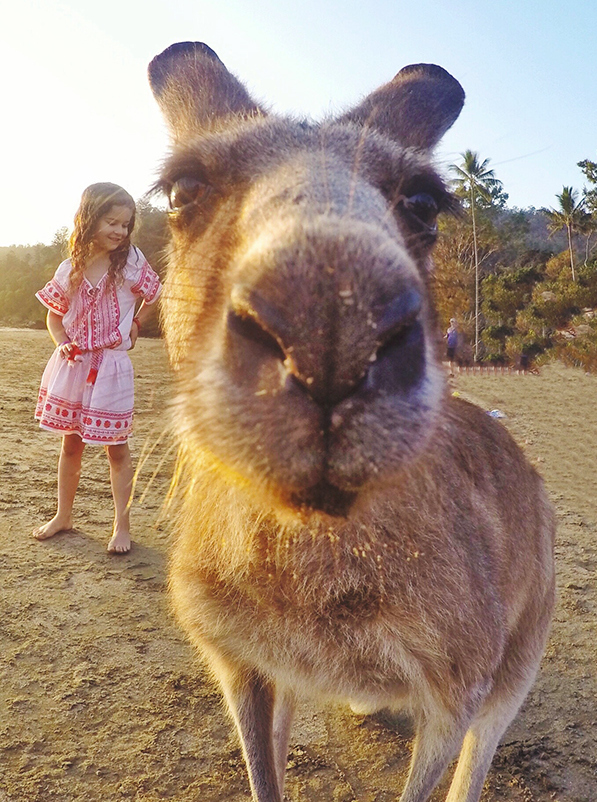 In fact, Bridget and Emmy-Lou are so blasé I half expect them to start signing autographs. These two girls love the limelight so much, they even photobomb the kids while they dig in the sand. 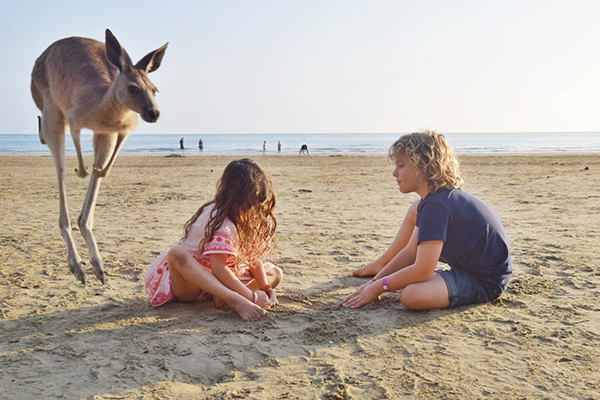 Along with Emmy-Lou, Bridget and friends, expect to find a paparazzi pack on the beach, especially during school holidays, jostling for a spot to photograph the girls and their co-stars. Thankfully resort staff are on the beach each morning to offer advice and deter visitors who think attempts at snogging a kangaroo or feeding them will make for a great selfie.

A word of advice to families visiting Cape Hillsborough. DO NOT bring food to the beach. Feeding native animals anything other than their natural diet can seriously damage their health. It can also make them aggressive towards people when they’re desperate for another fix of what is the wildlife equivalent of crack. Your precious selfie is not worth potentially harming an animal or another person. You’ll nab awesome shots without the need of props.

More to explore at Cape Hillsborough with kids

With the main event of our day out of the way before 7am, we toss-up between exploring Casuarina’s volcanic caves, searching for crustaceans hiding in rock pools, clambering over dramatic rock formations … or heading back to bed. Exploring wins. At least until it does until a couple of rumbly bellies suggest it might be time for us to head back to the Cape Hillsborough Nature Tourist Park Café for some foraging of the human kind.

So, is Cape Hillsborough heaven on earth for families? Well, if you love wildlife, a laugh, can live without Wi-Fi for a couple of days (the park has virtually no mobile phone reception and zero internet) and aren’t concerned by the occasional waft of roo poo, then yeah, I reckon it is.

Disclosure: Our Cape Hillsborough with kids experience was courtesy of Mackay Tourism, but as always, all opinions, roo wrangling, wilderness wandering and seaside antics are our own.

10 Comments on Things to do in Cape Hillsborough with kids