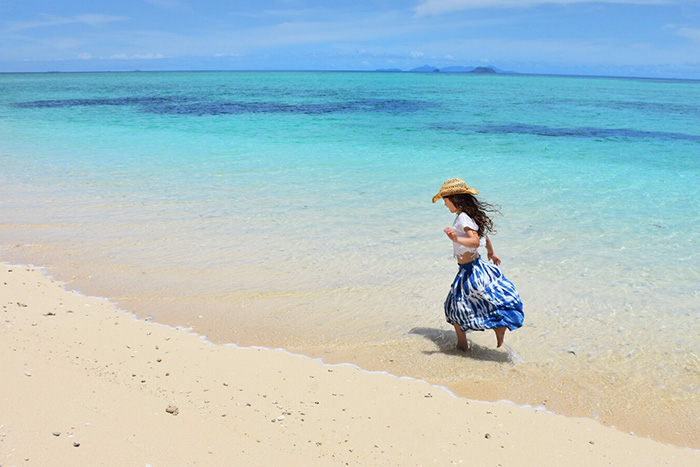 “Shark!” yells my ever-dramatic daughter as she dips her toes into the warm waters off Fiji’s Tivua Island.  I leave our stuff up at one of the beachside bures and run down to the water. Sure enough, a black fin emerges, just metres away from my daughter’s tiny toes.

“It’s adorable,” she declares, leaping straight into the water with the tiny shark and half a dozen of its equally tiny friends. 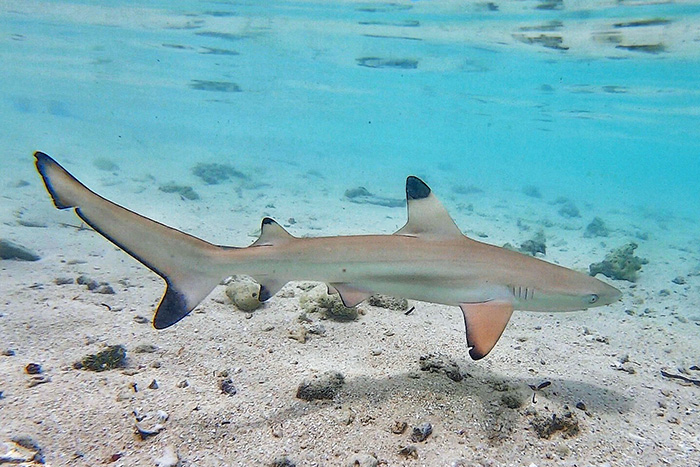 Turns out Tivua is something of a baby black tipped reef shark super highway and I half expect them to burst out in a chorus of “doo doo doo doo doo”. 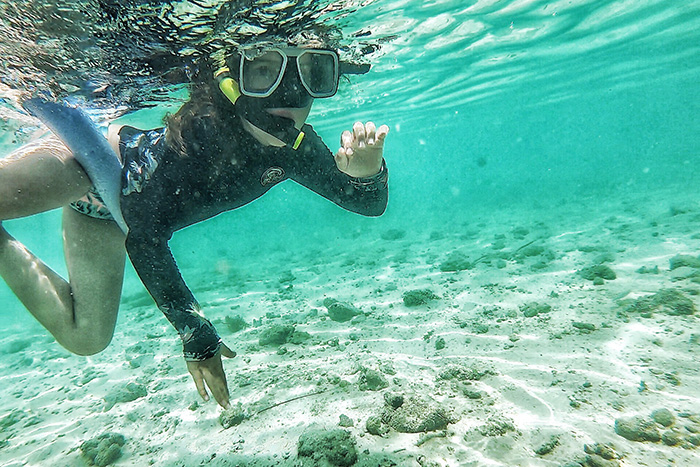 I join Sugarpuff and Captain Cook Cruises’ marine biologist guide in the gloriously clear water, and together we swim further out, passing more baby sharks and dozens of electric blue sea stars, to a coral garden buzzing with colourful parrot fish, stripy Moorish Idols, psychedelic angel fish, schools of long skinny garfish and a couple of Nemos flitting in and out of their anemones. 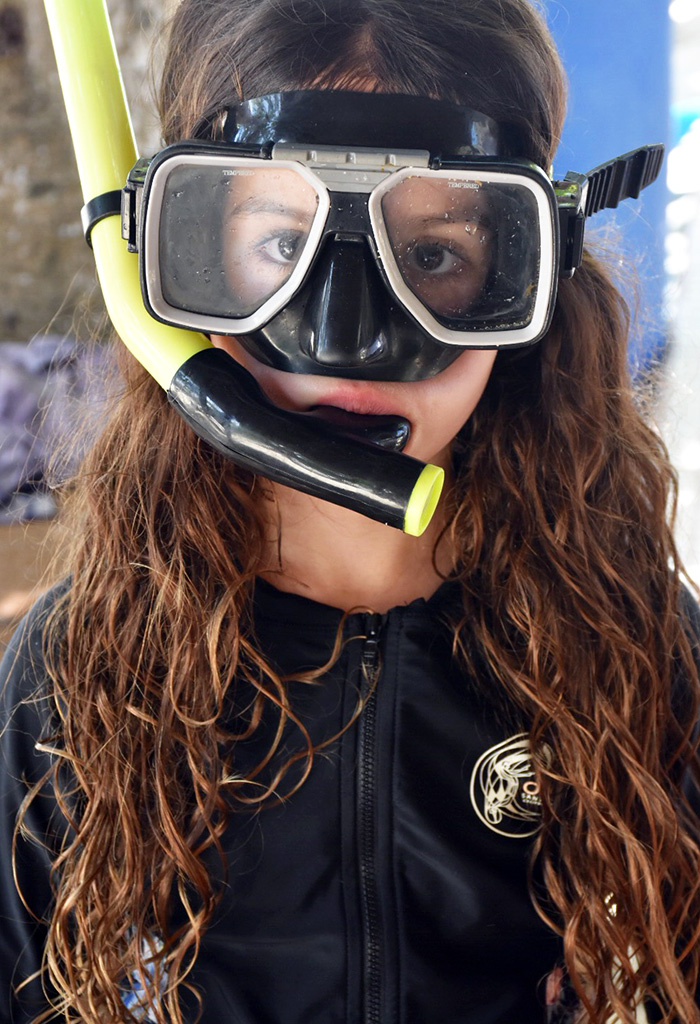 Kava and coral gardens on Tivua Island with kids

We’ve come to explore this small, sandy atoll in the centre of the Mamanuca Islands with the friendly crew from Captain Cook Cruises. Located just an hour from Port Denarau, a day cruise to Tivua Island with kids proves the perfect start to our Fiji holiday. 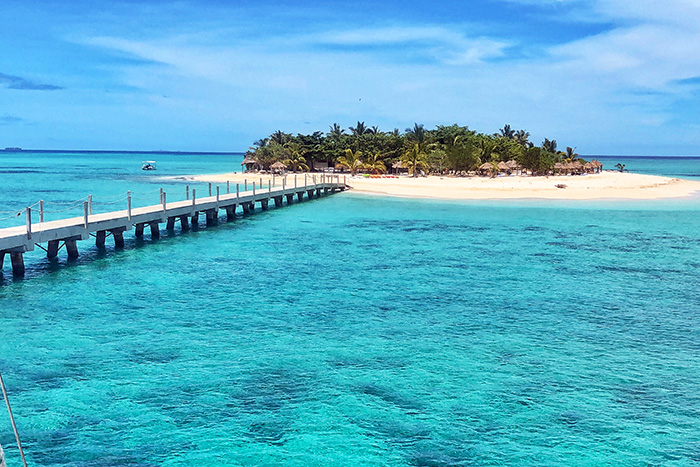 From the mellifluous tones of the Fijian crew who sing us across the seas to the traditional welcoming Kava ceremony when we arrive, this cruise is as much an introduction to Fijian culture as it is an opportunity to soak up a little of Fiji’s life aquatic on the surrounding coral reefs. 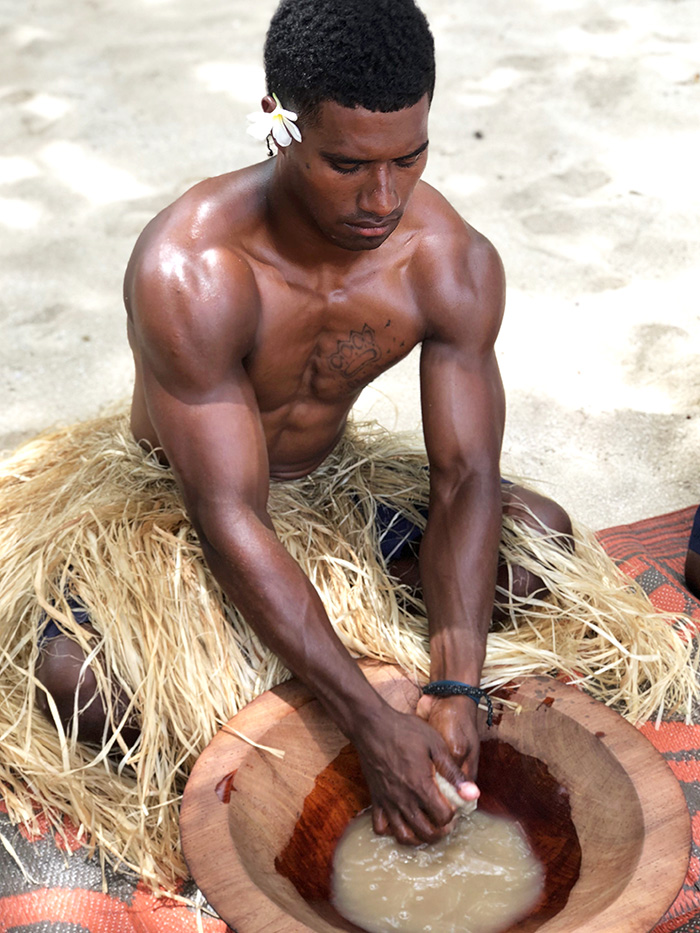 When it’s his turn to sup from the communal Kava tanoa (bowl), Raff knocks the brownish-grey beverage back in a single gulp, much to my surprise. Thankfully, he feels no ill effects from the slightly narcotic beverage, other than a bad taste. 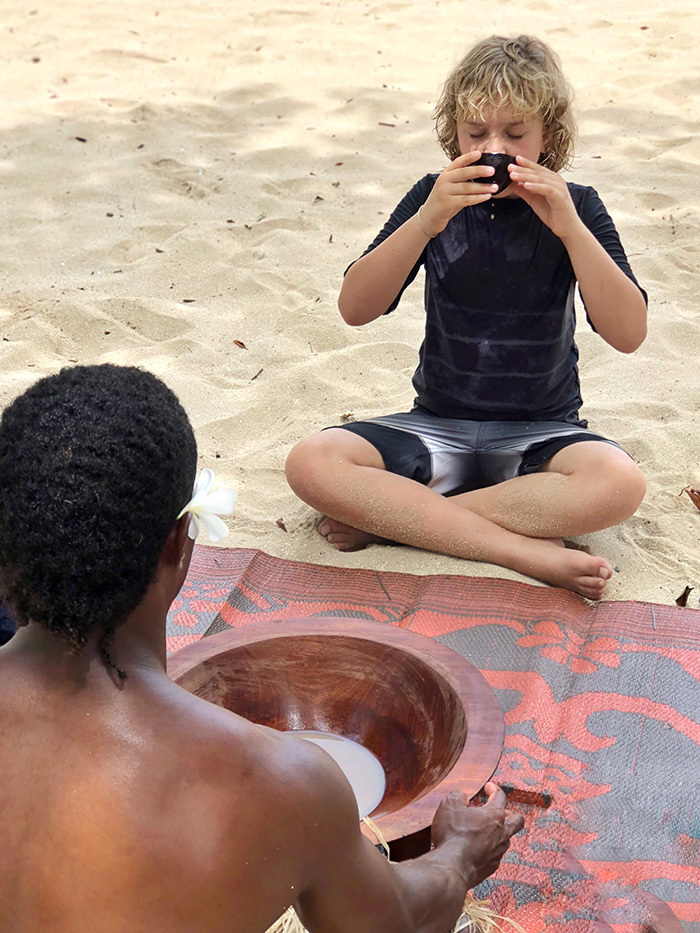 He smiles happily at his host and claps his hands in thanks, waiting until we’re out of range to whisper in my ear that it tasted like dirt and begs for a lemonade chaser.

Then my passionate ocean advocate is off, ready for an exciting new adventure that will bring him even closer to is beloved underwater world. He meets up with Joe from the PADI certified Viti Water Sports, who has been tasked with turning my little fish into a scuba diver. 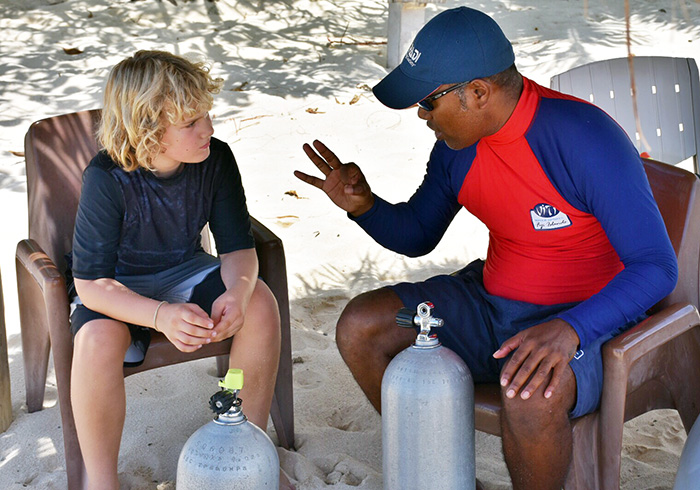 My eager student listens intently as Joe takes him through the basics and when they’re ready to head off for Raff’s first confined dive, the rest of us frolic with those cute baby sharks, and make use of the island’s array of water sports, happily kayaking and paddle boarding our morning away. 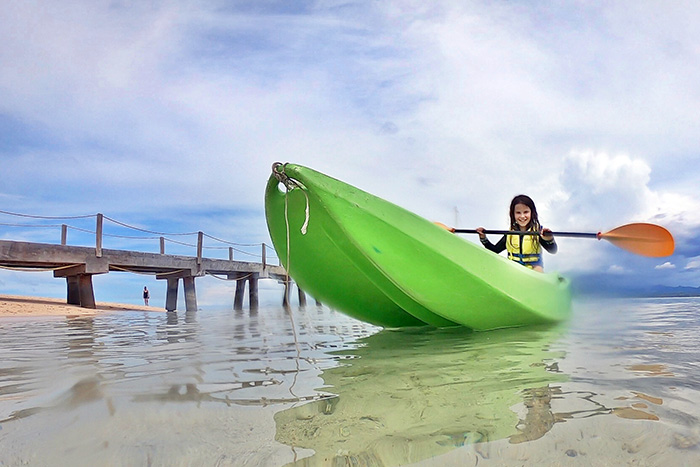 Lunch and learning on Tivua Island with kids

A beaming Raff returns to us just in time for lunch, already completely hooked on diving. So much so that while we take our time over the luscious salads, fish and tropical fruits, which we eat to a soundtrack of Fijian tunes and wash down with a sneaky Fiji Gold (the kids stick with lemonade), Raff just nabs a roll and some fruit.

I’m a little shocked as his eagerness to get back to diving is the first time I’ve ever seen anything take precedent over filling his stomach. 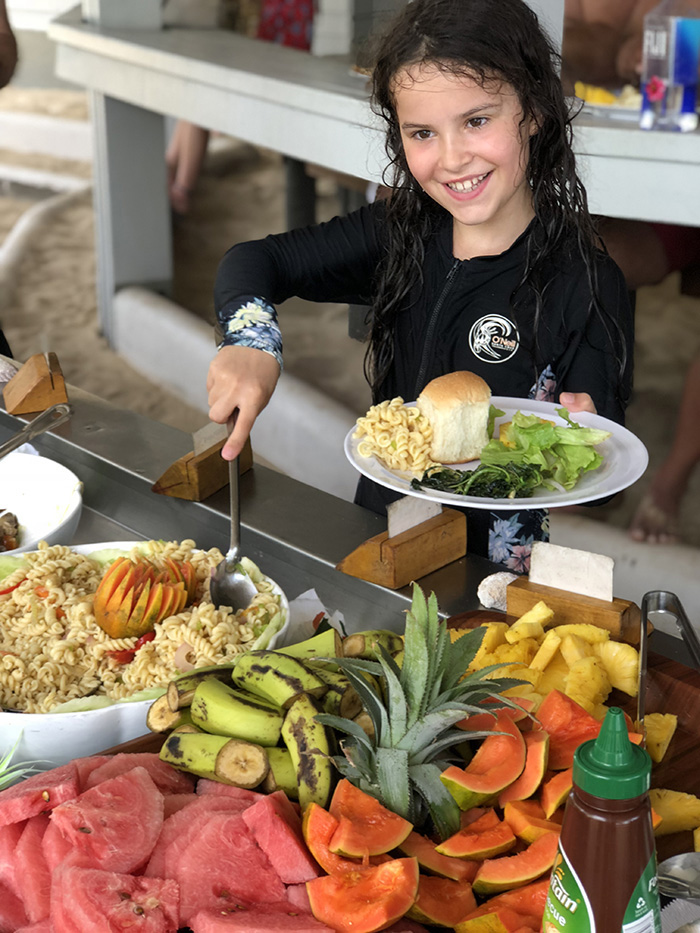 Post lunch, Sugarpuff heads off on a treasure hunt with her dad and plays happily with members of the crew, even donning a grass skirt that doubles as a bouffy blonde wig that would make Cousin Itt proud. 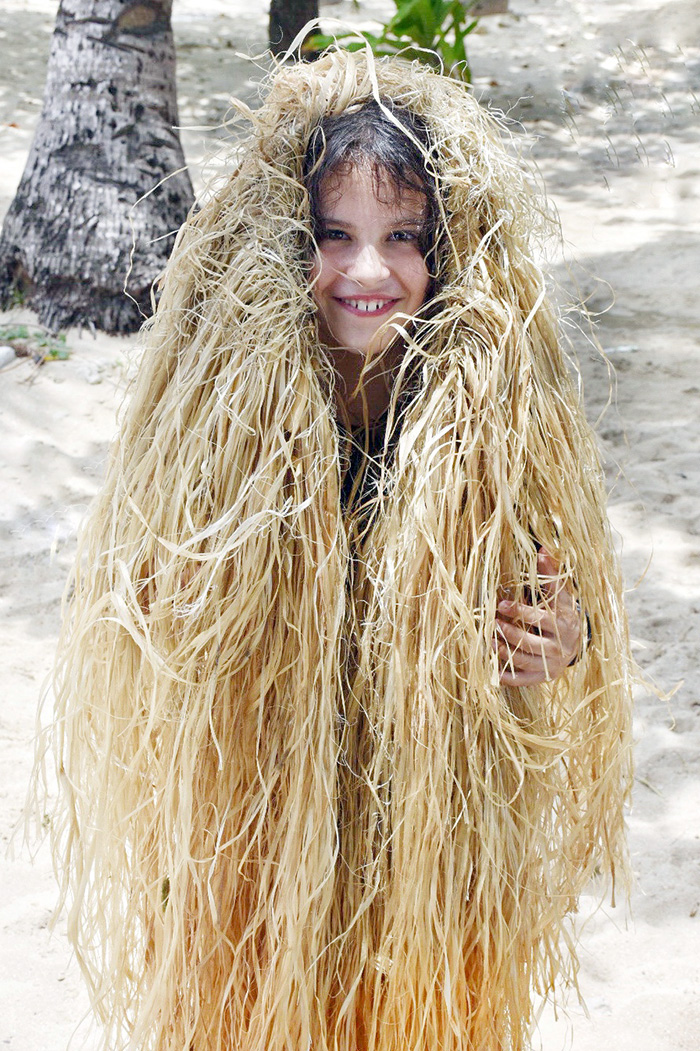 Together we take a leisurely lap of the island which, given it’s 800-metre circumference, takes less than ten minutes. Along the way we catch up with the Captain Cook crew who are hosting a fascinating guided herbal medicine nature walk, passing pretty palms and whistling native birds, as we earn about the traditional uses of island plants. 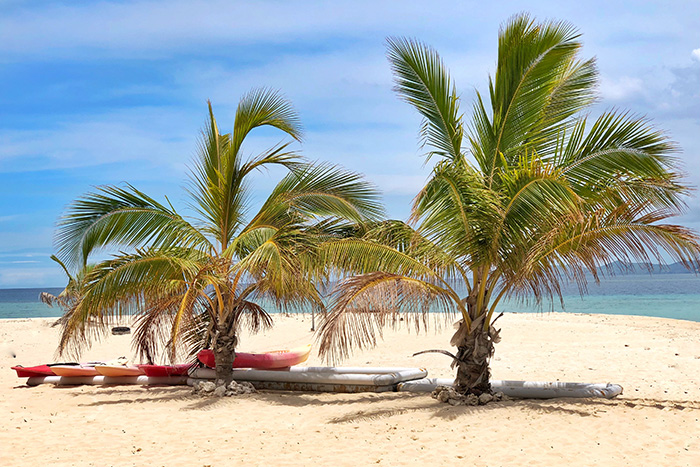 Soon enough, Sugarpuff decides it is high time for more baby sharks. But I leave her and her dad to their finned friends, as I have other plans at the island’s Senikai Day Spa.

While I sneak off for a lazy beach massage, my brave boy is diving deep down to Captain Cook Cruises Fiji’s own purpose sunk wreck, the MV Raiyam. My reward is muscle melting relaxations, his the sight of pretty corals and myriad colourful fish, including a fever of sting rays and a gnarly barracuda grinning a malevolent, snaggletoothed grin as he passes by. 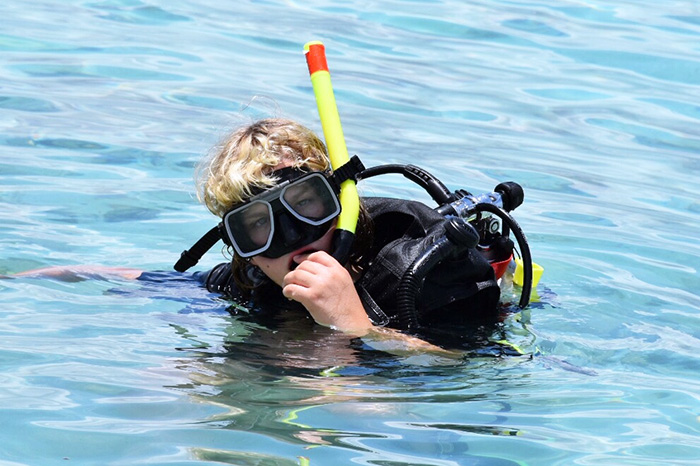 When it’s time to leave we all agree we’d be happy to be marooned on this tiny island paradise, but head obediently to the waiting catamaran. As we board my girl is still humming “Baby shark”, Raff is bursting with pride at his new found scuba skills, and we’re all happily sun kissed, sandy and ready to be sung back to Denarau by the friendly Fijian crew.