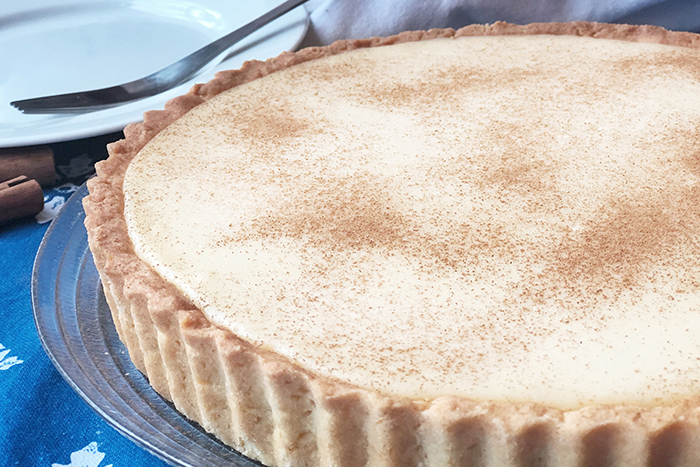 Busy piling a tower of cake on her plate, Sugarpuff nearly loses the lot at a sudden unexpected trumpeting that emanates from beyond our afternoon tea buffet. A parade of noisy elephants is lumbering at speed toward Sabi Sabi Bush Lodge’s inviting waterhole, with a couple of tiny (by elephant standards) tots in tow.

While the littlest leap clumsily into the water, the adults gleefully spray themselves with trunkful after trunkful of water. My daughter is torn. Does she watch the adorable scene or eat cake? The correct answer is, of course, both. 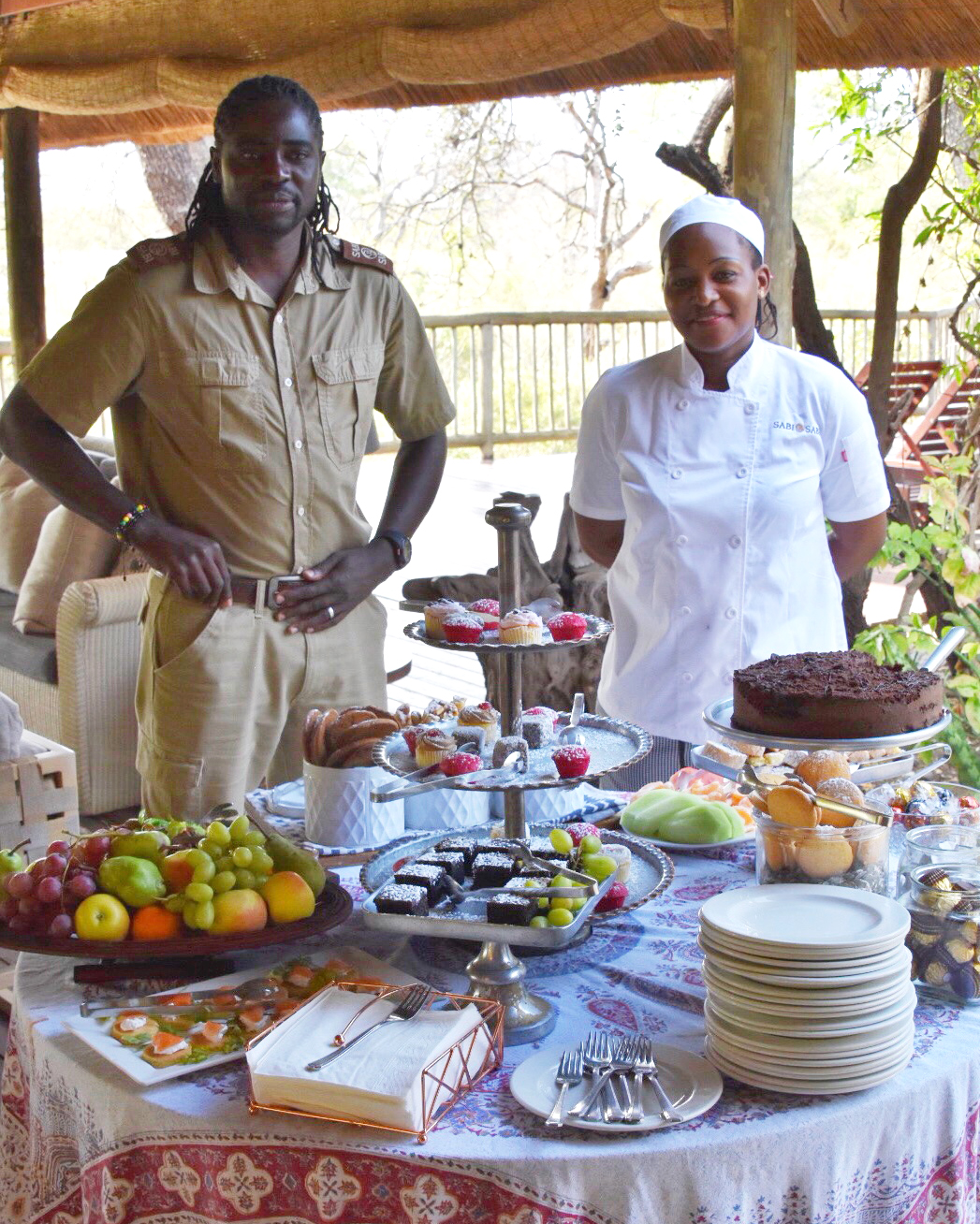 While it is wildlife experiences like these that brought us to Sabi Sabi Private Game Reserve, located on the southwestern corner of the Kruger National Park in South Africa’s Sabi Sands Game Reserve, there’s so much more to the Sabi Sabi experience, and the incredible non-stop food action is integral to it.

Our days start with steaming hot tea and early morning snacks on a pre-dawn safari. We return amped up from adrenalin filled Big 5 encounters to a hot cooked breakfast and brilliant buffet of local delights. Lunch is an a la carte al fresco affair overlooking the waterhole.

Not even remotely hungry by afternoon tea, it’s still impossible to resist the siren call of the towers of freshly baked cakes and biscuits. It’s the perfect fuel to keep us energised for an afternoon of wildlife spotting with our ranger until sundowners and snacks appear as if from nowhere. On our return we spy a cackle of hyenas shredding the kill of a sulky leopard, who watches the opportunistic diners from the heights of a tree.

Back at Bush Lodge, we’re almost as ravenous as the forlorn feline so swiftly change for dinner. We’re entertained by the hypnotic rhythms of local singers and dancers as we dine on smoky braai (barbecue) around a roaring fire in the softly lit boma. The following night’s meal is served under magnificent night skies at a starlight bush dinner, where we recount the day’s exciting encounters with our ranger, Dan, who proves to be a witty dining companion with a Pied Piper flair for enchanting kids.

But it is the food that is the real star of each meal, with memorable menus created by a clever culinary team to celebrate the freshest local organic produce and the very best of contemporary African cuisine.

And then there are those cakes…

One of Sugarpuff’s most oft repeated requests since our return from Sabi Sabi has been for a slice of South African Melktert, a delicate but decadent cinnamon-dusted milk tart that made an appearance during afternoon tea at Bush Lodge. Lucky for her, they’ve shared their recipe for the popular desert in ‘Bringing the Bush Home‘ – a gorgeous collection of tried, tested and timeless recipes from Sabi Sabi’s talented Chefs. 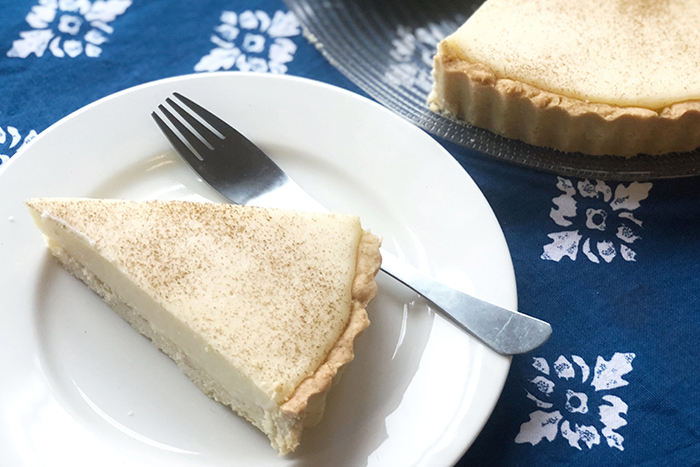 And Sabi Sabi’s South African Melktert recipe is so good it wings us straight back to afternoon tea under that thatched roof overlooking the waterhole and its hooting and honking elephants. Only after I serve it up it home, the trumpets of joy are coming from a small Aussie girl. 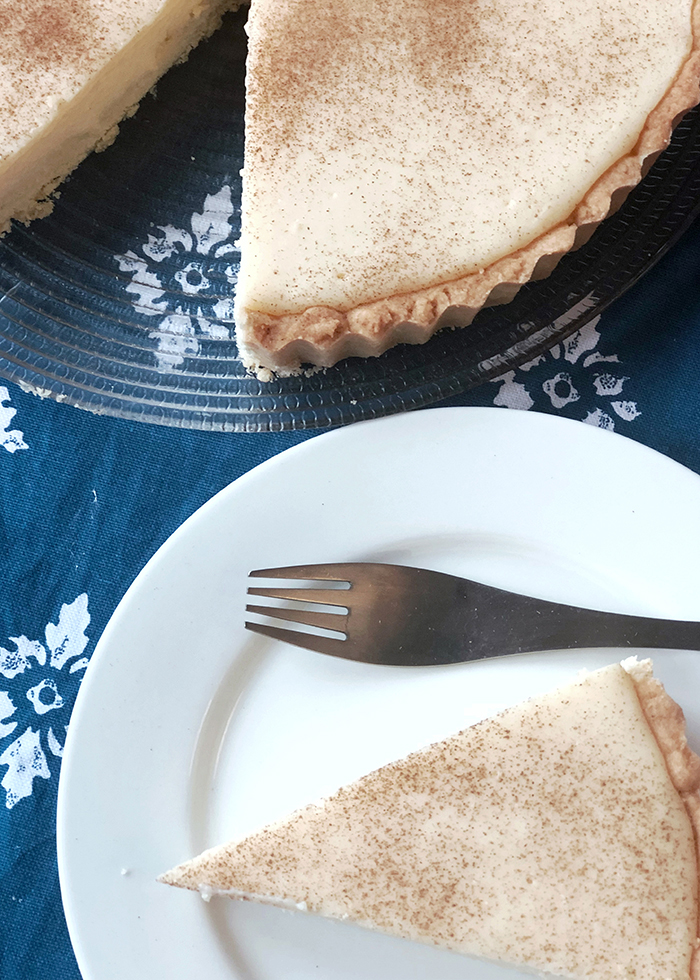