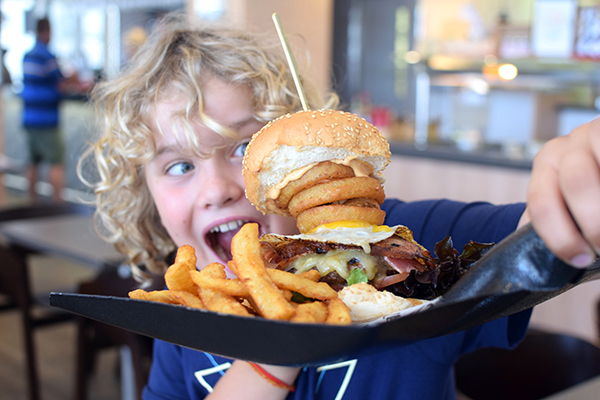 For our food fixated fam, the Mackay Region turned out to be quite the culinary surprise. Not only does this region bring nature to life with beach-loving roos and paddling platypus, lush rainforests and some of Queensland’s prettiest beaches, it’s also packed with epicurean delights.

Not only will visitors find sublime restaurants and cafes serving up the freshest local produce from the sea and the land, but they’ll find them doing it well.

Raffles and I were so impressed we suggest factoring in eating, right alongside with exploring, when planning your Mackay Region holiday.

From pub grub and clean eating cafes to alfresco eateries and fine diners, here, in no particular order, are seven of the best Mackay Region restaurants and cafes for families. 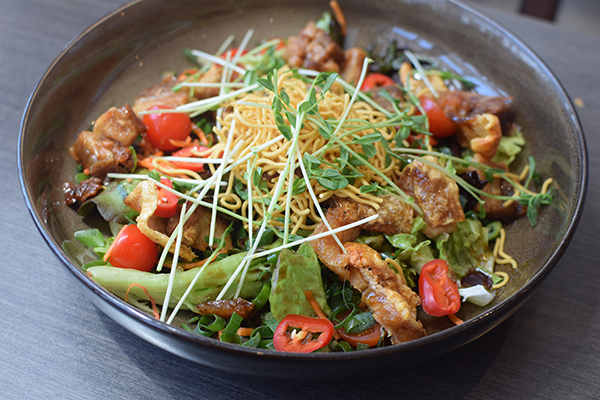 It’s a good sign you’re in for a tasty stay when you arrive at a destination and the food at the airport restaurant is this good! TurBARlence, a vibrant open plan indoor/outdoor restaurant located in the Ibis Mackay, is about a ten second walk from the departures and arrivals area. Here we found a good variety of gastro pub offerings that show off Mackay’s wonderful produce.

The pork, peanut and lime spring rolls had us arm wrestling over the last one. Raff rated the sticky, crunchy and sweet pork noodle salad and I devoured a tender Angus Rib fillet in toasted sourdough. But the star of our lunch was Mr Eats World’s Worker’s burger, a mile-high masterpiece piled with beef, bacon, egg, tomato, beetroot, salad and onion rings then topped with spicy chili mayo and served up on a shovel, that was a flash of burger brilliance. 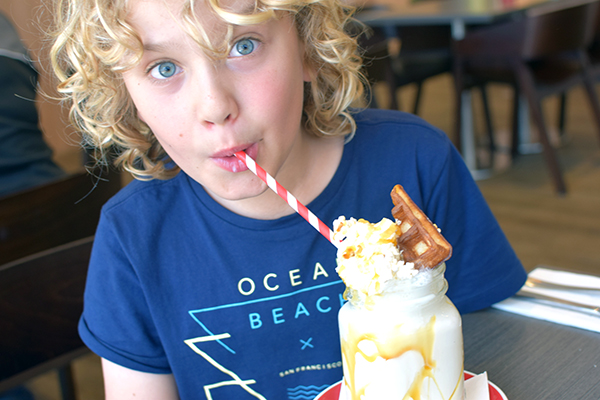 There’s a great kids’ menu too, epic freak shakes, colouring and little planes for the kids to make and fly. Whether it is when you arrive or as you leave, this place is a must for anyone who loves their taste buds. 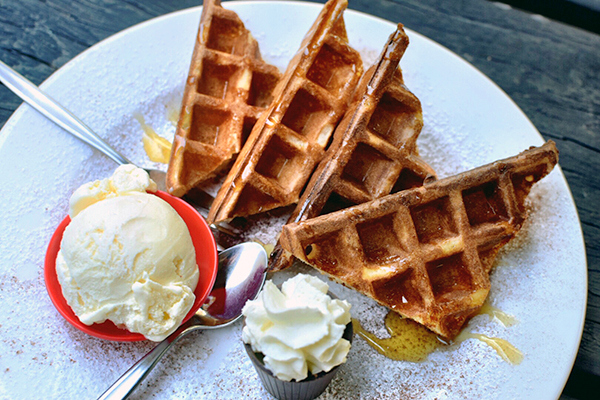 An al fresco rainforest experience, hidden away along the Broken River in Eungella National Park, a short walk from a section of river renowned for its wild Playtpus colony, the Platypus Lodge Restaurant was perhaps the biggest surprise on our culinary explorations. Run by a delightful Austrian chef, Oskar, who uses European culinary flair, combined with native Aussie ingredients including kangaroo and crocodile, to serve up top notch schnitzels, burgers, waffles, homemade ice cream and more.

We were promised good waffles but what we got were the best waffles we’ve ever eaten. And Raffles rated the Croc Burger, stuffed with lemon pepper crocodile, crunchy salad and topped with tartar as quite possibly the best burger on earth and has been raving about it on a daily basis since. 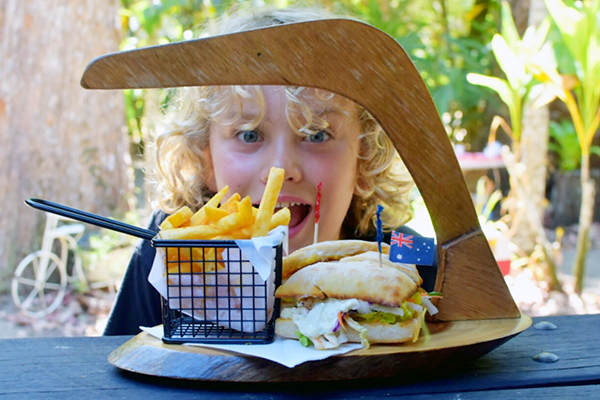 But the tip of the day is to order the Yodel Burger, which will be personally served by Oskar with a side of yodelling. 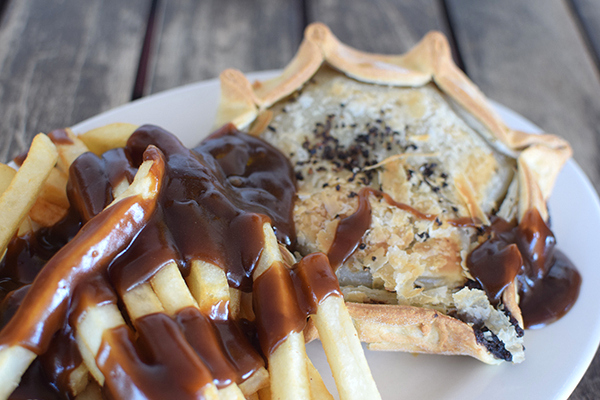 You know a pie has got be good when eating one is rated as one of Queensland’s Top 150 Must Do’s by RACQ. The Pinnacle Family Hotel, sixty-five kilometres outside Mackay, on the road to Eungella, has been serving up their legendary Pinnacle Pies for 90-years, so they’ve had plenty of time to perfect them. The enormous pies, seriously these things are the size of a plate, enjoyed with view over the sugarcane fields, are the perfect combination of fabulously flaky pastry and marvellously meaty fillings all made in house and produced with local ingredients.

While I had a plain steak pie, which was great, Raffles’ pepper steak filled pastry was a work of fiery zesty art. And for Sugarpuff, who isn’t a big pie fan, the crumbed steak and chips was not only just as tasty as the pies, but so huge we could be forgiven for thinking she’d been served an entire cow. And she ate the lot. Well, except for the bits I pinched when she wasn’t looking. 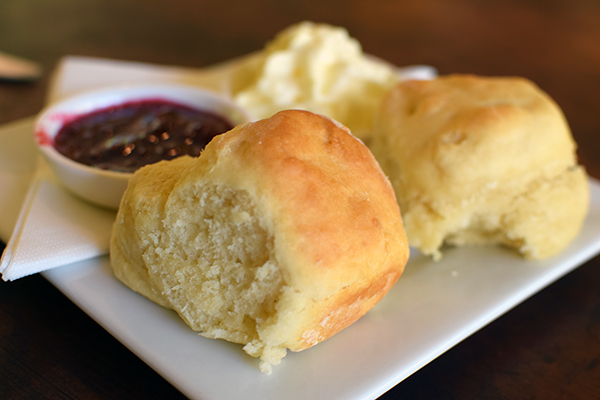 A delightful 110-year old former railway station, The Old Station Tea House is hidden amongst a beautiful forest setting on the road to Cape Hillsborough. While initially we dropped in for a quick nibble of one of their famous Devonshire teas, we ended up staying for ages and ages. 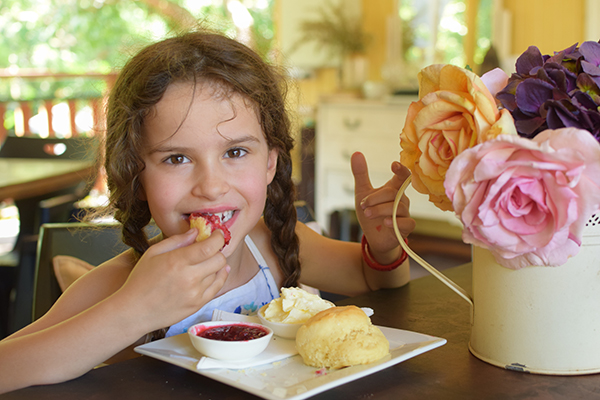 There are lush gardens to explore, nooks and hidden crannies brimming with bric-a-brac and antiques, space to run and play and an aviary with a rather bossy goose and a small collection of native birds of prey. And the scones? They were perfectly light and fluffy, served up with homemade jam and lashings of cream, and so good we ordered a second serve. 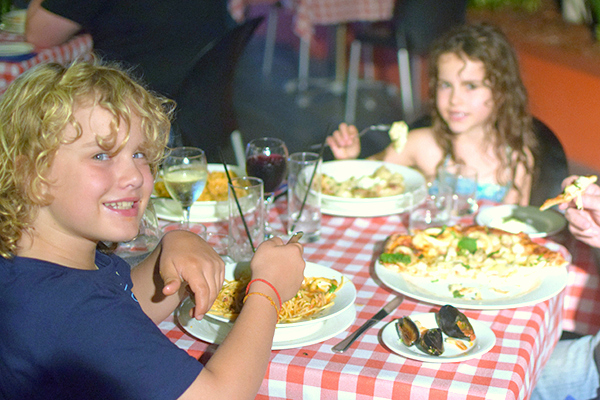 The Mackay marina is a buzzing spot with a selection of great restaurants serving up everything from fresh seafood to international delights, backed by live bands and musicians. We soaked up the atmosphere, and bucket loads of pasta and pizza, dining al fresco at Angelo’s on the Marina where we opted for fresh local seafood cooked in traditional Italian style.

The fusilli with Moreton Bay Bug Tails tossed in green peppercorns, garlic, chili and a white wine, tomato and cream sauce was sublime, though big enough for two, handy given Sugarpuff decided she was eating half of mine.

Raffles’ Spaghetti Marina was exceptional, bursting with fresh chunks of local seafood, and Mr Eats World devoured his seafood topped pizza. Servings are generous, even for a bunch of pelicans like us, and we waddled away from our meal. If you are a light eater, unlike us, it’s not a bad idea to consider sharing. 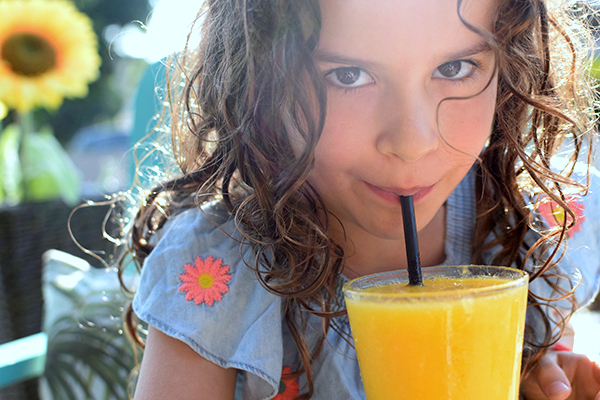 The Grazing Goat is the spot for a guilt free breakfast fest. There’s a cleverly designed menu to suit everyone’s taste and eating requirements with healthy, clean cooking the order of the day. So, while you can still shovel in a perfectly cooked eggs benny, there are also plenty of gluten and lactose free options along with paleo, vegetarian and vegan choices. And they’re all good.

The cafe is a little ray of sunshine with its sunflowers and outdoor furniture. Raffles wolfed down his smashed avo, piled with perfectly poached eggs and dotted with pomegranate seeds, and Sugarpuff was in ravenous raptures over her banana and berry topped pancakes and fresh squeezed juice. 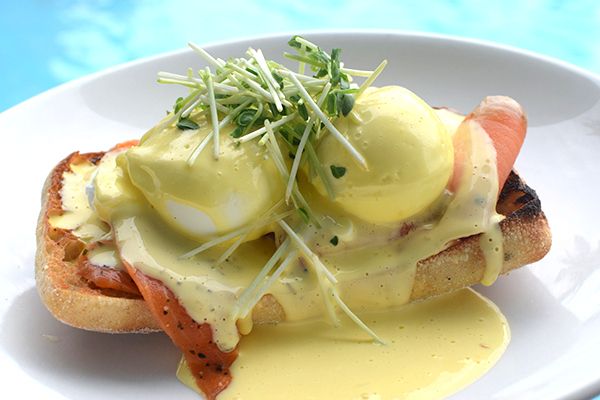 We’d heard that Salt Café at Dolphin Heads Resort in Eimeo was the spot for a fine dining dinner or an al fresco poolside lunch, but given our imminent departure only had time to sample their breakfast offerings. If they’re anything to go by, we’ll be coming back next time to taste our way through the lunch and dinner menus.

My Salmon Benedict was perfectly cooked and presented, Raffles’ obsession for smashed Avo was happily sated and the breakfast Crepes with fresh berries and choc hazelnut sauce kept Sugarpuff happy indeed. And best of all there’s a lagoon swimming pool and boulder dotted beach where we could swim and walk off all those calories and hunt for seaside treasures.

Disclosure: The Eats Worlds were guests of Mackay Tourism, but gorged independently. All opinions, and any cellulite gained, remains our own.