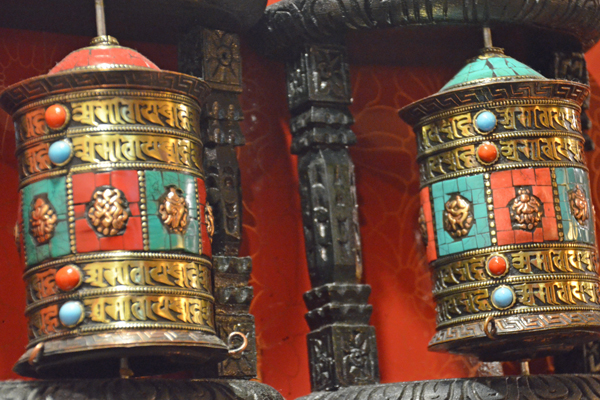 “Mama, let’s go to Batman Do!”  is the typically odd demand I receive from Raffles. My head is immediately full of disturbing mental images of a town populated by an army of Adam West era Batman’s. Just think of all that spandex clad paunch. Quel horreur. It would be like being forced to sit through an episode of Jersey Shore.

“If you can tell me what you’re talking about, and if such a place actually exists in this or any other realm we can certainly discuss it further” is my non-committal answer.  I expect that will be the end of the conversation as clearly my beloved child is talking mince. Silly me.

“You knowww… Batman Do!” he shoots back witheringly, tossing in a scathing look that illustrates quite clearly that, as far as he is concerned, I have the intellect of a tree stump. Rolling his eyes, Raffles then alters his tone to the slow condescending one generally saves for simpletons.

“Mama. Batman Do. You know. Where Rinju is from. In Nepal…”

Ohhhh! That Batman Do! The one that’s pronounced as a single word and begins with a K!

Rinju is Raffles number one girlfriend. I say number one because he is quite the ladies man and our suburb is littered with his “girlfriends” but Rinju holds a special place is his little heart.

With only a tiny 23 year age gap between them, she is Raffles ‘Demi’. Only without the cosmetic surgery.

So in love is he with his beloved Rinju that he once stole my wedding ring and presented it to her as a gift. Technically I guess that makes her his fiancée.  And, as she comes with a dowry of many chocolate frogs, I cannot help but approve.

The Fiancée is indeed from Kathmandu. Somewhere, I might add, that I am desperate to visit. But as keen as I am to whisk Raffles off to Nepal this fine morning, the absence of plane tickets and cash could prove the proverbial spanner. Instead I suggest we call The Fiancée and catch up at a restaurant for an afternoon of Nepalese delights.

His squeal of excitement suggests that it is more she than Kathmandu he is truly interested in. And so we find ourselveves at The Muglan, sandwiched between some prayer wheels, a plastic Buddha, a gong and a brightly hued thangka (embroidered scroll). 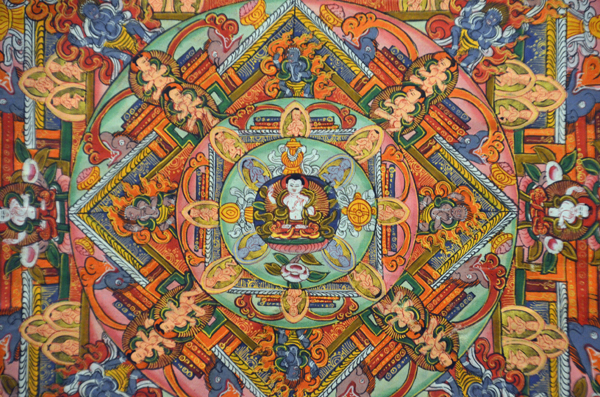 While maybe not as exotic as actually being in Nepal it’s a fun and tasty compromise. Nepal is a country of fascinating cultural and geographic diversity and its cuisine is delicious proof – an interesting hybrid of Chinese, Tibetan and Indian. Nowhere is this more obvious than in a dish of Momo – glistening Chinese-style steamed dumplings stuffed with goat or chicken (we’ve ordered the chicken under advisement) and Indian spices served with a bowl of clear broth. Raffles, having previously learned to make them with The Fiancée,  is a huge fan and inhales about a dozen of the plump morsels of awesome. 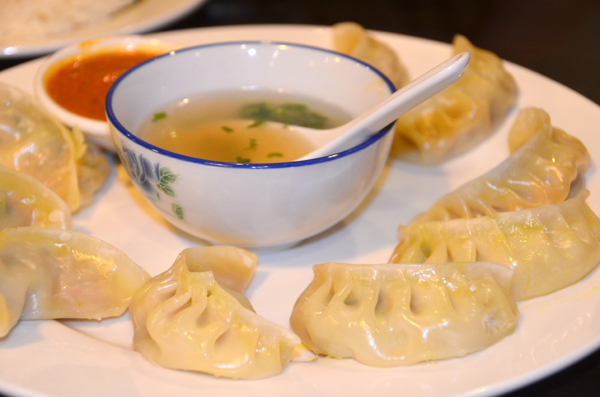 I retaliate by scoffing the best part of a bowl of delicious Chilli Momo, steamed the same way but coated in a deeply spiced red sauce though my little piglet manages to nab a few while I’m distracted by Sugarpuff who appears to be bathing in the broth. 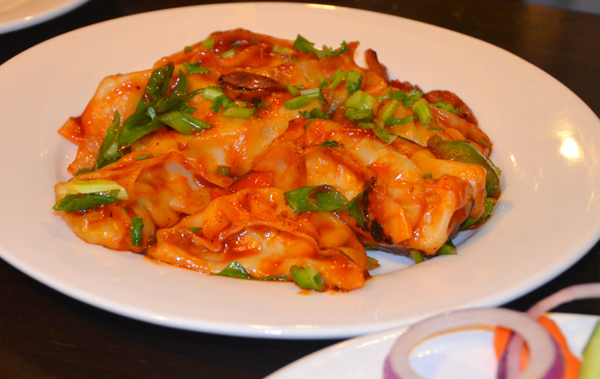 A fragrant wave of coriander, ginger, garlic and cumin overwhelms us as the Choyla is served. A succulent clay oven grilled marinated chicken, it’s accompanied by spicy chutney and chiura – beaten rice that Sugarpuff decides is just flattened rice bubbles. 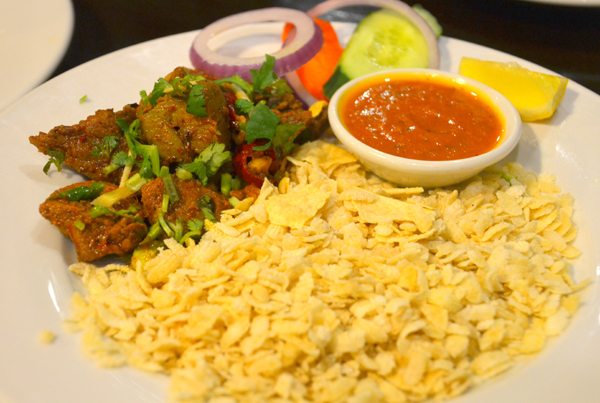 Puri ­– fried unleavened bread – is served with a little bowl of vegetable curry that is quite possibly the best I’ve ever tasted. In Nepal it would be eaten for breakfast. I could live with that. 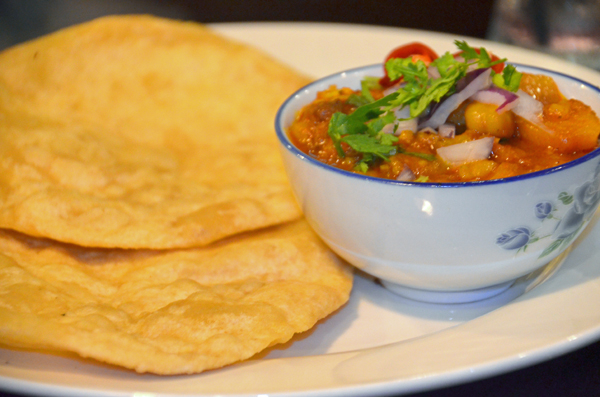 The Thakali Thali is a platter of individual bowls containing steamed rice, Khasi Tarkari (goat with a tomato based curry perfumed with fenugreek, coriander and bay), a perfect lentil daal, spinach saag, tarkari (vegetable curry), achaar (pickles) and yoghurt. In Nepal this would be a typical family dinner and I can understand why. It’s healthy, balanced and quite irresistible. 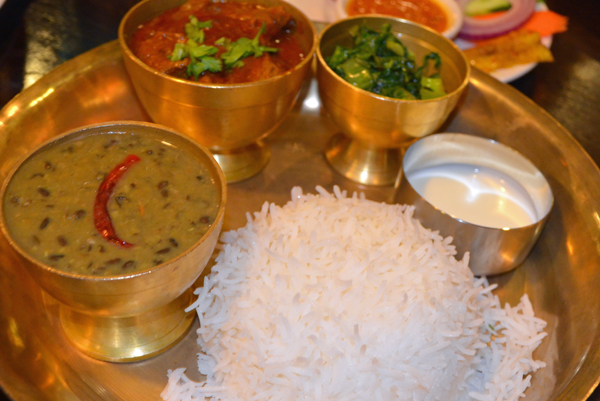 While we eat we’re entertained by stories of life in Kathmandu and its rich and unique culture and tradition. 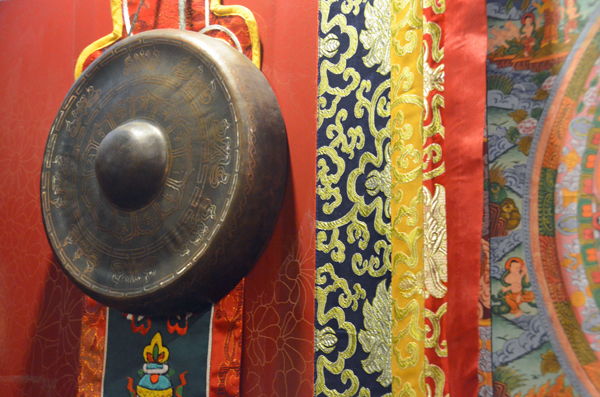 The Fiancée has just returned from a visit home for her brothers Bartabandh (a colourful and complex Hindu ceremony where a boy shaves his head and performs rituals as symbolic representation that he has come of age). Hinduism, though tinged with Buddhist beliefs, is the predominant religion of Nepal much to Raffles approval – the kid is obsessed with all their fabulous Gods and mystical stories.

I am enthralled but Raffles is busy making goo-goo eyes and giggling and squealing a lot in the self-conscious way that only the love-sick can.

That is until his beloved shares her tales of bungee and base jumping Kathmandu style. Suddenly the giggling stops and she is propelled into superhero status. Holy Momo, Batman! Perhaps he had it right with “Batman Do” after all.

In one meal we’ve managed to consume breakfast, lunch and dinner with a few snacks thrown in, and we leave with expanded minds and bellies. The only setback? Our taste of Nepal has left us wanting a ticket to Kathmandu. Stat.

16 Comments on A taste of Nepal // The Muglan