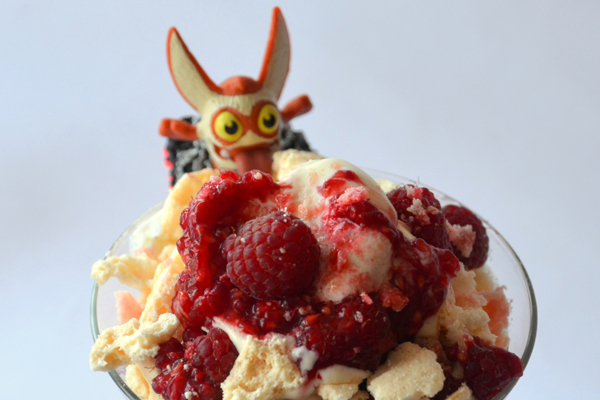 We’re off to Skylands. A land of magic and mystery, idyllic islands, rugged mountains, lush flower-strewn meadows, watery paradises and some of the fluffiest powder snow I’ve ever seen. Seriously, this place is off the chizzain as far as destinations go.

The locals are, of course, a delight. They are a friendly and heroic bunch, passionately dedicated to protecting their environment. Well, except for a certain rogue element who are hell bent on destroying the very fabric of Skylands society… but you get that.

No, we’re not lucky enough to be going on a secret test flight with Virgin Galactic (though if you happen to be reading this Sir Dick, and you ever need a couple of monkeys to don space suits… call me). It is, in fact, Super Skylanders Saturday! A day where three small boys will talk, eat, play and breathe Skylanders – the ridiculously popular toy/video game mash-up -until my head explodes. 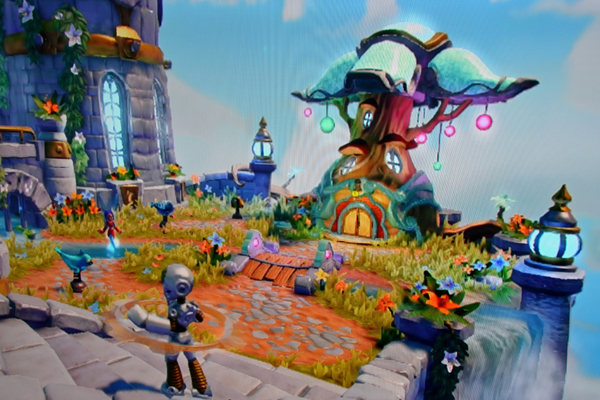 Now some people may be surprised that my jet-setting, wok-sizzling ninja is into computer games but he is still a six-year old boy and regardless of his love of filling his face and flitting about the world, six-year old boys love games. I have to admit, given my penchant for play of the educational variety, I was a touch unimpressed when Mr Eats World first introduced Raffles to a gaming console (and by “a touch” read: I screamed like a Banshee at him for about a week), but have since had to concede that not only has a little supervised game play encouraged Raffles wild imagination, it’s also helping him with problem solving skills. Who’d have thunk it? Well, besides Mr Eats World and several billion gamers.

Still, due to the fact I am a heartless mother and would prefer my son not to become a screen fixated zombie, he is limited to a maximum two game hours per week. Those two hours are hopelessly devoted to Skylanders, a genius marketing ploy by the lovely folk at Activision that involves me purchasing an endless cast of freakish figurines that shout outlandish catchphrases like “Axe First, Questions Later!”

But I digress. It is an invitation to the launch of the brand new Skylanders game, Trap Team, that has spawned Super Skylanders Saturday. You see Raffles and his two gorgeous besties, who shall henceforth be referred to as Cookie Boy and The Greek God, are so excited that they have spent weeks scheming and plotting this parentally approved day devoted to all things Trap Team. They even came up with a creative menu of Skylands treats for me to make. “Because every country has its own special cuisine… right, mama?” Right… and it would appear that this ones is based primarily on sugar.

So, the menu was never going to prove one of our healthiest but Gearshift Pizza Rings and Gil Grunt Sushi at least err to the side of nutritious. 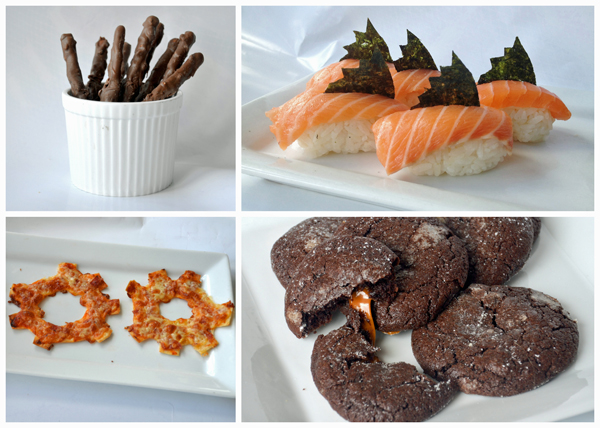 The neon-iced Element Butter Cookies and Weeruptor Chocolate Brownie Cookies filled with salted-caramel ooze (which I adapted from this fabulous recipe) not so much. Still they are inhaled by Cookie Boy and his sneaky sidekick Sugarpuff (who is hanging about doing her best to annoy her big brother and his pals). 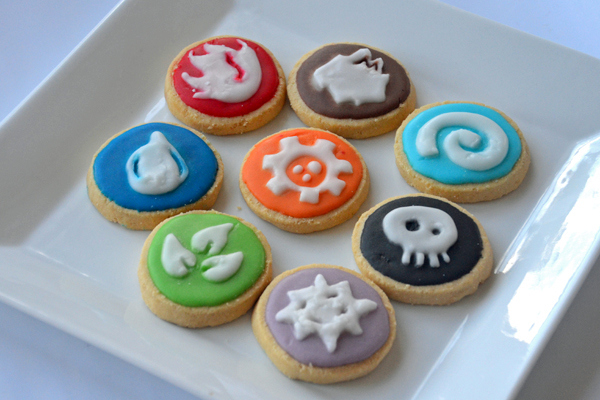 But Raffles’ culinary pièce de résistance is his very own take on an Eton Mess, the Blastermind Blow-up – a cacophony of smashed almond meringue, ice-cream, double cream, crushed raspberries and wads and wads of popping candy (see recipe below).

Between face stuffing, the boys get cashed up with Skylanders Monopoly and set off fart bombs in honour of Stink Bomb, one of their old favourite characters, whose catchphrase, “Clear the Air”, is soon being screamed loudly by the sugared-up trio. 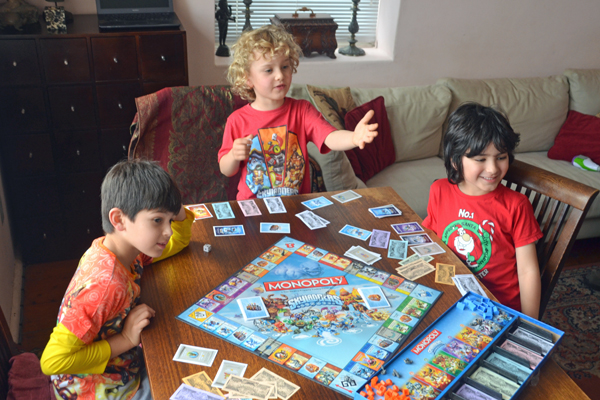 As in previous incarnations of Skylanders, the players in Trap Team control their characters by placing collectible figurines, each with a unique personality, on an external portal to activate an on-screen likeness. But there are plenty of changes in this new game to keep things interesting, not least the addition of traps.

These physical crystals are inserted into the Traptanium Portal to capture and store any of the 40 bad guys – a bunch of cray-cray prisoners who have escaped from Cloudcracker Prison – led by the terribly naughty Lord Kaos who is determined to have his wicked way with Skylands. Raffles particularly likes Chef Pepperjack, natch! It’s quite disconcerting hearing their voices coming out of the “traps” in the portal. In a quirky twist, once captured, the villains can then be played as good guys in the quest to save Skylands.

Besides the playable in-game villains, there are more than 50 new collectible Skylanders figures including 16 Trap Masters, super cute mini-skylanders and a cast of fabulous dudes like the drooling dinosaur/helicopter hybrid called Chopper, thug-like Fist Bump, monkey man Fling Kong and the completely adorbs Food Fight – a tomato-shooting, animated artichoke whose catch phrase is “Eat this!”. 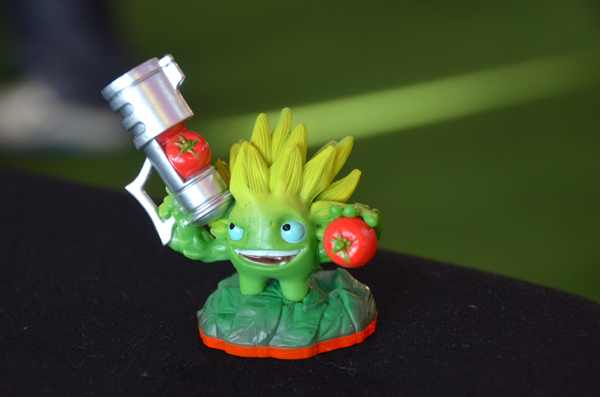 So what’s the verdict on Trap Team? It’s twisted the minds of our three little portal masters who rate it “epically awesome!” 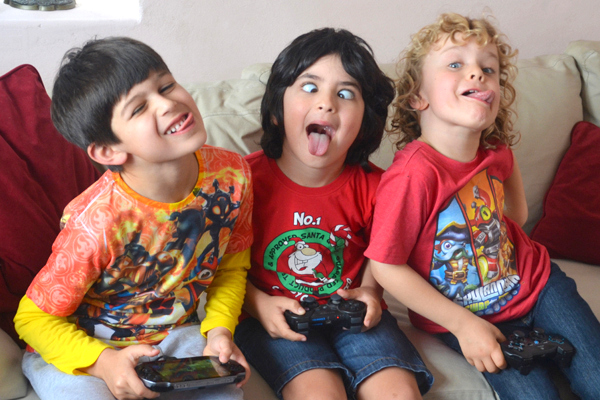 Given that Raffles’ favourite new character is the aforementioned tomato-splattering Food Fight, we have one last little Super Skylander Saturday surprise for the boys. Yep, you guessed it, it is time for the inaugural Sydney Tiny Tomatina festival! 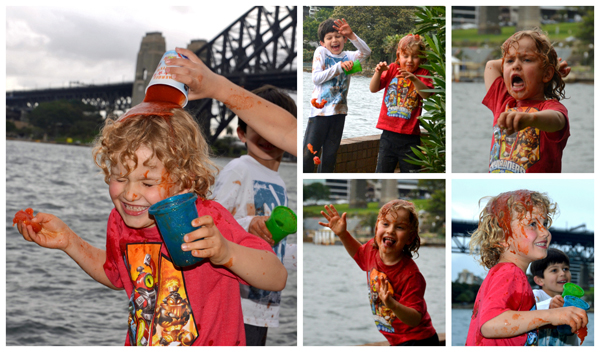 Well, at least a tomato tossing food fight – the perfect way to get the boys to wear off a little of that sugar from their Skylanders Trap Team party before we send Cookie Boy and The Greek God home to their respective parents, slightly stained and soggy but delighted with their afternoon in Skylands.

Raffles gives his verdict on Trap Team and gets a bit of a surprise in the video below… “Eat this!” 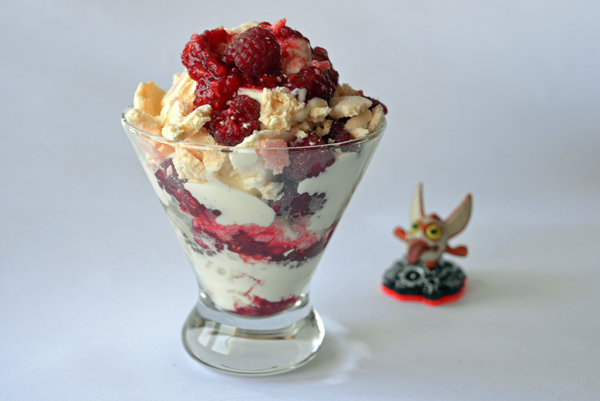 Disclosure: This is not a sponsored post. We were invited to the Skylanders preview and Raffles (and his pals) went bonkers for it, turning it into a day of all things Skylanders. This invitation came with no obligation to share or for Raffles and I to make a menu of Skylands treats. We did it because he is obsessed and we wanted to share.