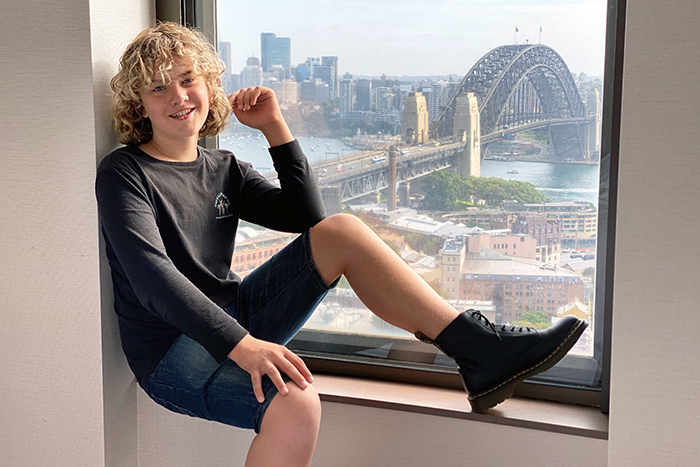 I really miss travelling. My feet are itching like crazy and I’m desperate to get back into the world. While food, culture and the people we meet are what I have missed most of all in the year that stole travel, I also find myself really missing hotels. So you can bet I was thrilled when the Four Seasons Hotel Sydney came to my rescue, right in time for my 13th birthday.

There’s just something about a good hotel that makes my heart sing. You might think it’s because of the change of scenery, or that they’re like a gateway to holiday fun. But nah, that’s not it. It’s the promise of a massive comfy bed, room service and buffet breakfasts (though they seem to have been replaced with a la carte these days to help control the spread of COVID – not that I’m complaining). 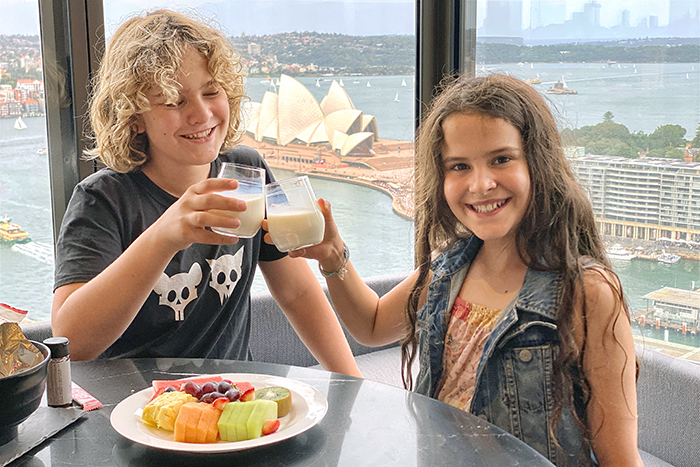 Oh, and the room fairies that make the beds for us and leave plates of fresh fruit or sweet treats. And that magic moment when we first enter, when everything is tidy and there’s no mess, and mum gets a look on her face like she’s entering heaven. We love seeing her so blissed out, though we don’t seem to be able to replicate it at home. That may have something to do with our habit of creating collections of dirty glasses, bin avoidance and superior skills at turning floors into wardrobes, or floordrobes as I like to call them.

But mostly what I love about a hotel is that its whole purpose is to make you feel so good you’ll want to come back. And that’s exactly how I felt after our night at the Four Seasons Hotel Sydney, desperate to repeat the experience … ASAP.

You can check out why in the little video my sister and I made below … or read on because I have so much to tell you. 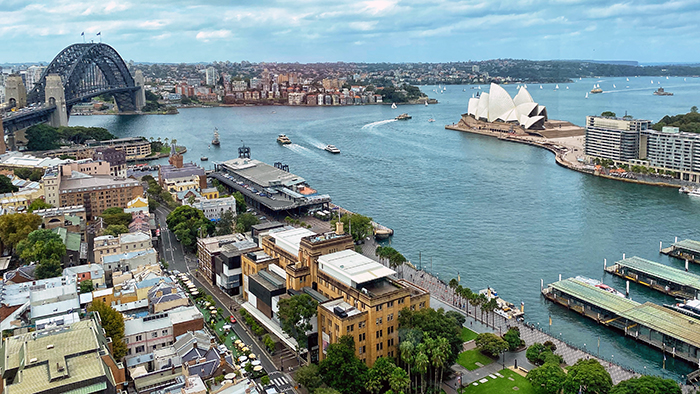 The location of the Four Seasons Hotel Sydney, right alongside The Rocks and Circular Quay, is seriously hard to beat. There’s more access to public transport than you can poke an Opal Card at and it takes just a few minutes to walk to the Sydney Opera House and the Botanic Gardens. There’s just so much stuff to do … if you actually want to leave the hotel. I was happy not to go anywhere at all because I just wanted to soak up every second of its 5 star awesomeness. 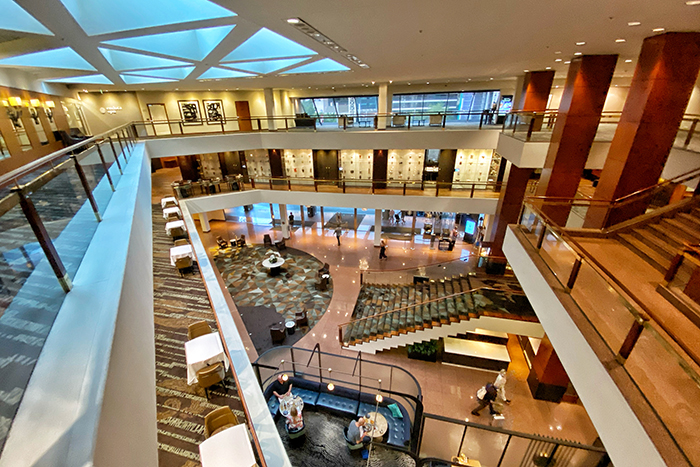 We were whisked through the all-important COVID-19 safety checks and into the epic multi-storey lobby, which was all gleaming marble, sparkling chandeliers and a massive stair case that leads straight to heaven. 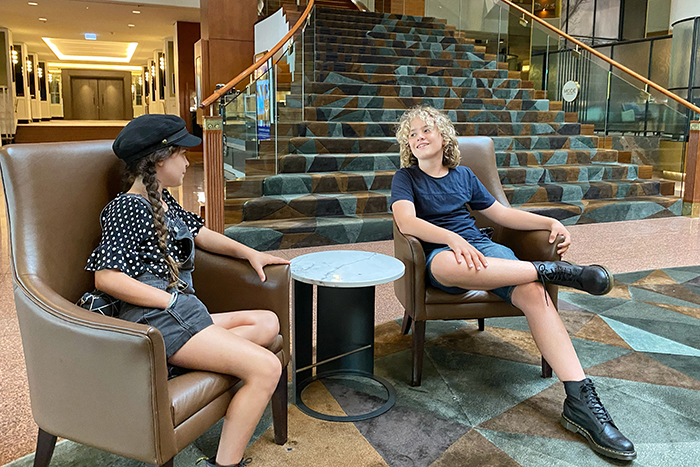 Well, the pool and the hotel’s heavenly rooms at least (though you can just take the elevator if you’re feeling lazy like us). 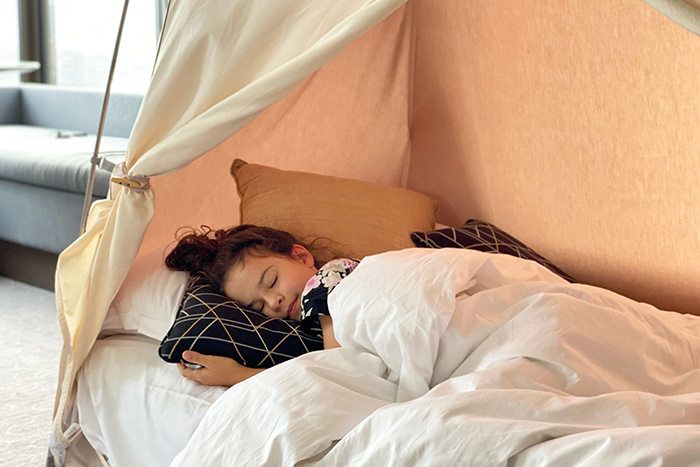 The Four Seasons Sydney offers a variety of rooms and suites including wheelchair-accessible guest rooms with wide doors, lowered switches and roll in showers, and there are interconnecting rooms that are great for larger families. We were lucky enough to stay in a corner King Harbour Room right up on the 33rd floor. Between the view and the squishy bed it felt like we were sleeping in the clouds. 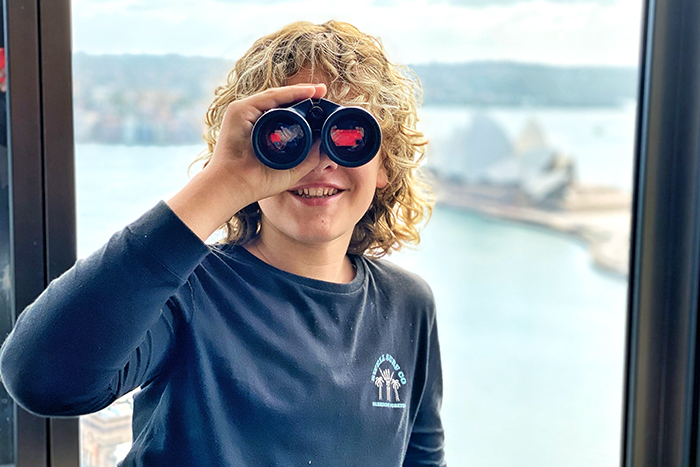 Along with a comfy lounge area, a dining nook and the marshmallow-soft king bed that mum insisted was hers (rude, right?), there was an equally comfortable rollaway for me and, wait for it, an entire mattress-filled tent  (part of the Family Fun at Four Seasons Hotel Sydney package) for my sister, who swanned about like she was Queen of the Clouds after spotting it. Like she needed any help in that department. 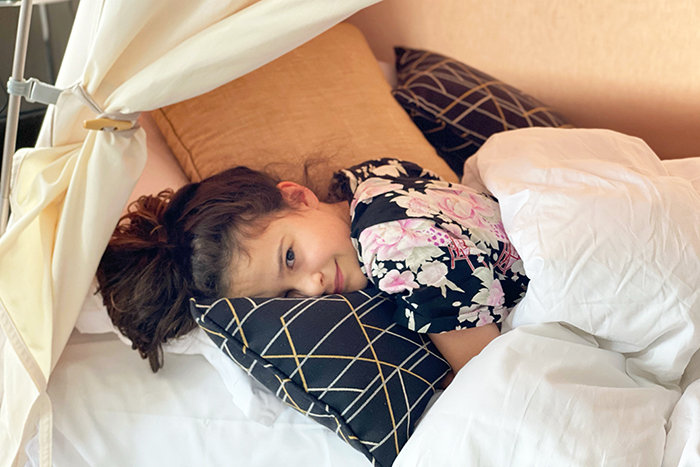 The room was really airy and fresh, mostly because of the massive windows and the views over the Harbour Bridge, Opera House and city. But the light modern furnishing helped too. And the bathroom was the size of my bedroom at home. 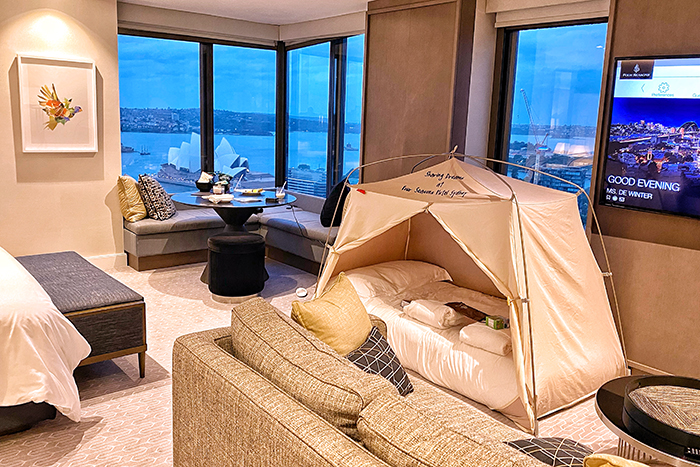 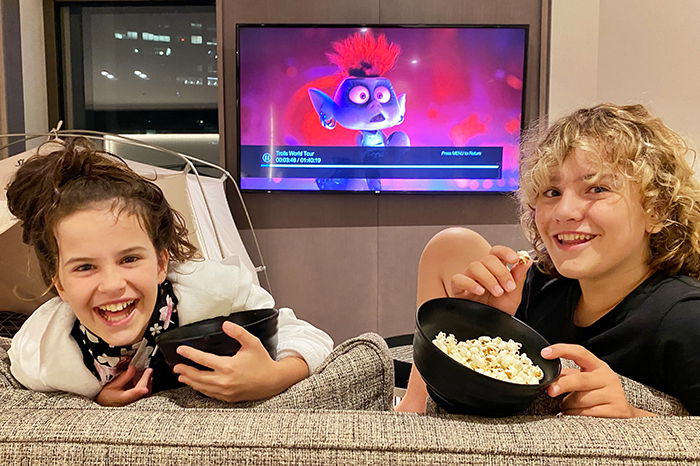 The thing I loved most though was that the room was so high tech it felt like Tony Stark’s bedroom. There was a huge, and I mean HUGE, TV, Nespresso machines and all the usual stuff but there were also buttons to activate curtains and block out blinds and mood lights and even Bose speakers which came in handy for a pre-dinner in-room disco. 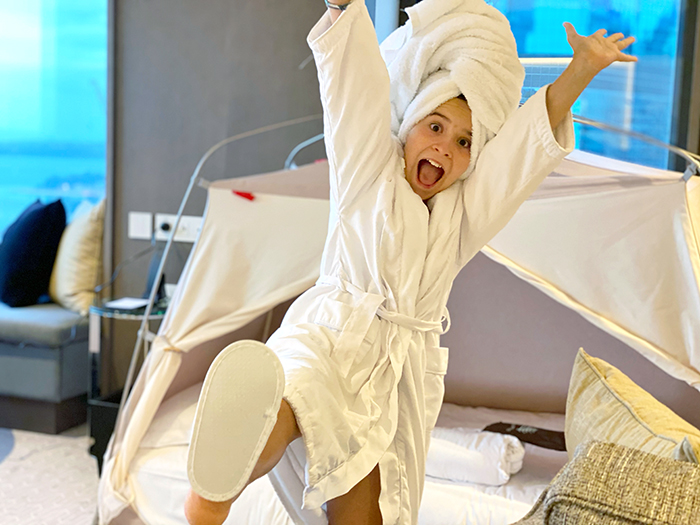 By disco I actually mean my sister and I danced like idiots in hotel bathrobes and slippers while mum rolled her eyes and tried to organise us to get down to dinner with actual clothes on. As if! More on dinner (yes, with clothes on ) in a sec.

Oh and I just have to mention the view again. Because it was AWESOME. Especially at night. 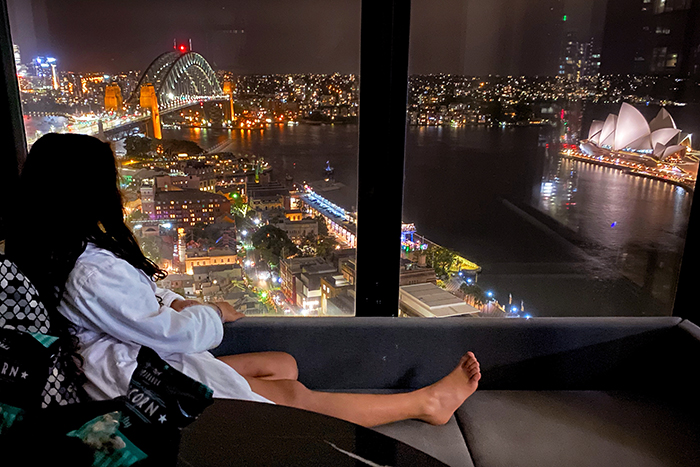 Like I already knew Sydney is a pretty city at night, but we couldn’t take our eyes off the view from our room. Seriously, who could? 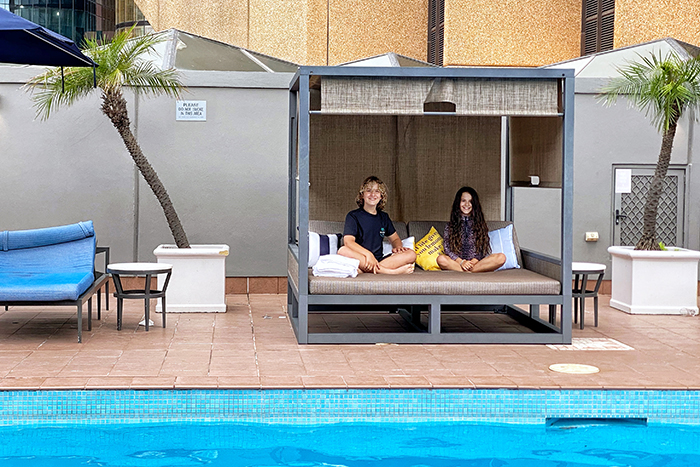 Our King Harbour Room meant we got access to Lounge 32 which had more amazing views and serves all day canapés and evening cocktails. Mum was upset she missed the cocktails and we only had the chance for a quick peak inside because my sister and I were terribly busy wasting our entire afternoon in the pool. But seriously, she has no one to blame but herself, because if she really needed a cocktail, she could have just ordered one from the bar on the pool deck.

The pool at the Four Seasons Hotel Sydney is the largest heated outdoor hotel swimming pool in the city and has a separate spa plus cabanas and lounges to laze on.

I can’t really say if they were comfortable or not because between the pool and the spa we pretty much stayed in the water until the sky turned black and our bodies were all pruney. 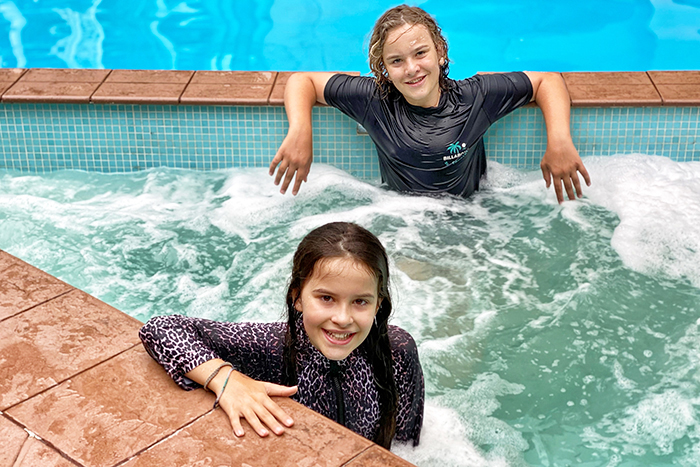 The pool area is wheelchair accesible via a stair lift too which is awesome to see. My poppa lived with a disability so we like to see hotels that look out for people with different needs.

We tried really hard to convince mum to go for a massage at the hotel’s Endota Spa because she totes deserved it, but she said we were here for family time so passed. I think we’ll keep her.

Apparently, there’s also a really good 24-hour fitness centre with weights, cardio equipment and a sauna and steam room but as our agenda was simply to sloth I have to confess it didn’t even get a look in. Soz. 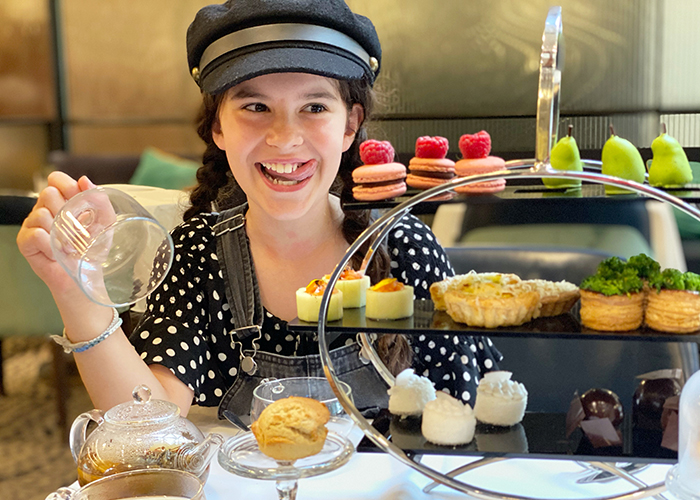 As promised, let me get back to my favourite topic. Eating. Along with a bar called Grain (which we didn’t visit because it’s a whisky bar and well, we’re kids), the hotel’s main restaurant is Mode Kitchen & Bar, which somehow manages to be both caj and schmancy at the same time. And yeah, kids are very welcome.

It’s kind of wrapped around a central bar with velvet bar stools and a blazing wood-fired oven. There’s also an open kitchen, which I always love. But I can’t take my eyes off the super cool chainmail curtains, which I would love to take home with me except they’re longer and taller than our entire apartment. So even though I could use them to fit out an army of knights, they’re not entirely practical. Plus stealing a hotel’s arty curtains isn’t really like pinching the soap, and they’d be pretty hard to smuggle out without getting stopped by security. 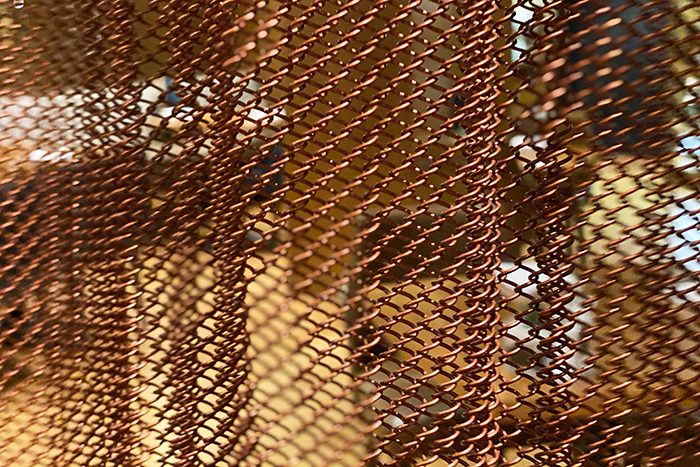 Anyway, more important than my curtain coveting is the actual food, which I’m happy to report is ah-maz-ing and why the restaurant has been awarded a Good Food Guide Chef’s Hat for two years running. There was much licking of plates as we ate our way through a menu of vol au vents smothered in stracciatella and Siberian caviar (OMG its so good), zucchini flowers stuffed with smoky buffalo ricotta and truffle, an insane ocean trout tartare, roasted miso eggplant, spaghetti topped with Moreton Bay bugs and too good dry aged duck breast. 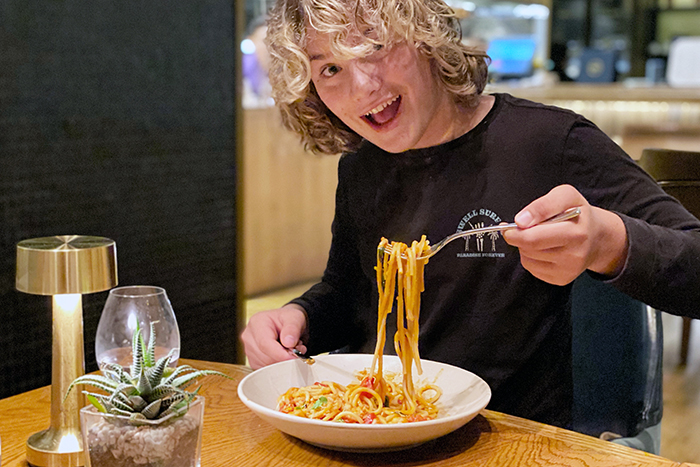 I’ve got to mention our waiter, Riley, who was so helpful when it came to making our selections, and who served up every morsel with a smile. He rocked.

But the biggest highlight of dinner was when the Pastry Chef, Elliott, who studied at the Alain Ducasse institute in France, invited my sister and I into the pastry kitchen to help assemble dessert. 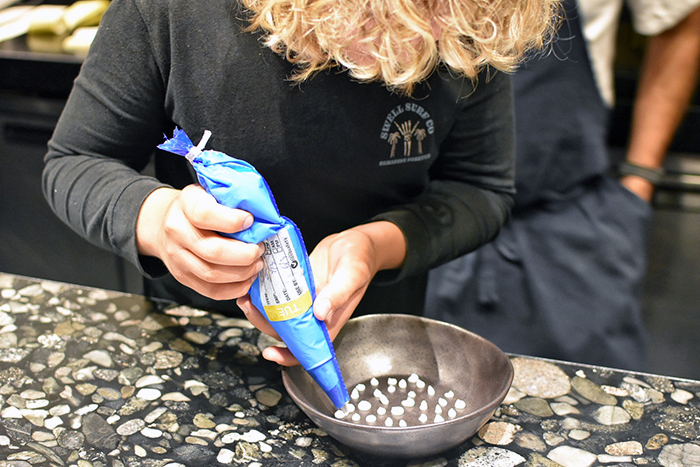 Sugarpuff worked her magic on chocolate mousse, salted tuiles and raspberry sorbet and I helped construct a frozen coconut pavlova packed with hidden secrets and served on a fog of dry ice. Just wow! 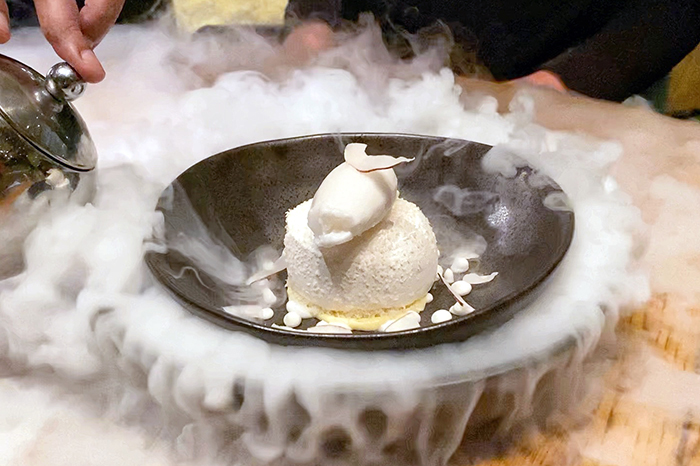 Breakfast at Mode Kitchen & Bar was equally impressive and in place of the buffet they offered three courses of a la carte goodness, made to order. 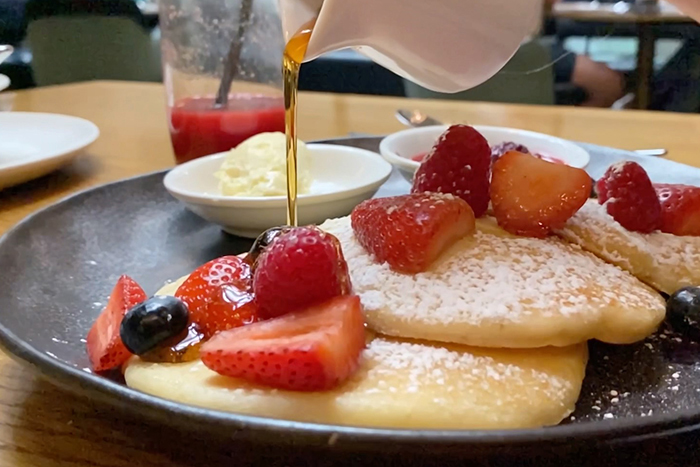 So good was our experience at Mode Kitchen & Bar that even though we checked out at 12, we came back later in the afternoon to tackle their scrummy high tea. 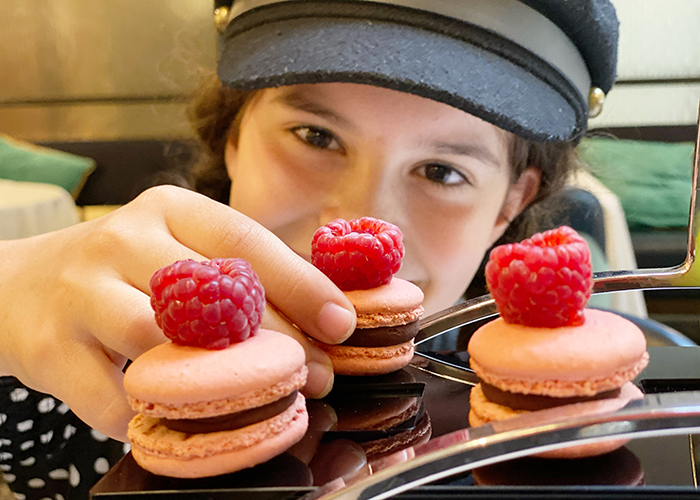 I can honestly say it was one the best I’ve had in Sydney. And you know you can trust me on that, because after my ten-minute training in the kitchen with Elliot, I’m totes an expert now. 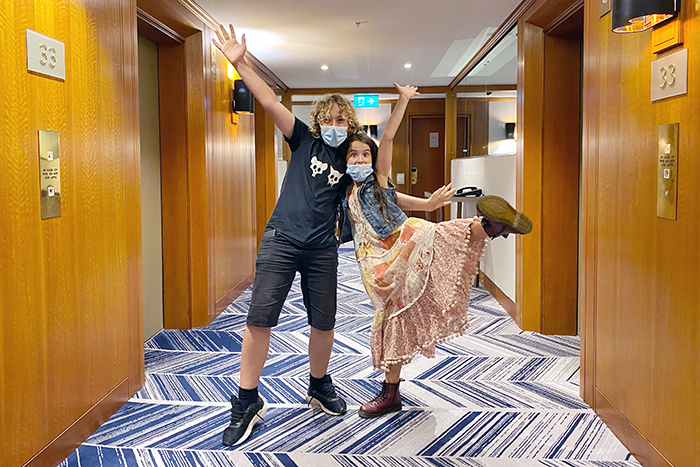 One night sleeping and eating at the Four Seasons Hotel Sydney was enough to give my itchy feet a pretty good scratching and left me feeling like I’d been on holiday for a week … and that I might need to go up a pant size.

Disclosure: The BoyEatsWorld family were guests of Four Seasons Hotel Sydney, but all disco dancing, pool hogging, pastry cheffing and opinions are our own.