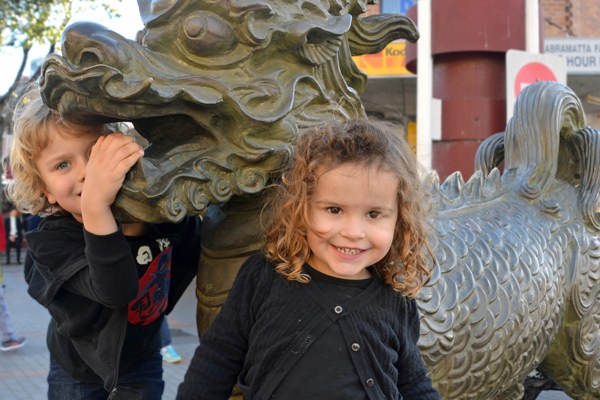 I’ve been doing this parenting gig long enough to know better than asking the kids what they’d like to do on the weekend.  The answer always ends up involving long distances and full bellies. Needless to say, I wasn’t at all surprised when I asked them where they’d like to head in the Ford Territory Titanium that we’re driving for the Voices of 2014 Paint the Town Ford Challenge, and they responded with “for noodle soup” and the slightly more ambitious “around the whole world?”

Right. The Ford Territory Titanium is certainly feature-packed and with its sexy spacious leather interior it’s also quite luxurious but I’m fairly certain it doesn’t have a private jet mode. Nor, I suspect, is it sea worthy. But if it’s noodle soup and an around the world jaunt the kids want, its noodle soup and the world they’ll get.

With more than 200 different ethnic cultures here in Sydney, we’re spending our weekend on an urban adventure putting Terry-Lulu’s (the kid’s still can’t agree on a name, or a gender, for our shiny red friend) built-in GPS through its paces and immersing ourselves in the different atmospheres, foods and traditions that can be found in the international communities dotted throughout our city.

Given that Vietnamese pho is the kids’ noodle soup of choice the first stop on our world tour has to be Cabramatta, Sydney’s “Little Saigon”. If we can find a parking spot in the busy suburb, that is. The Ford Territory Titanium’s reversing camera and sensors prove our saving grace enabling us to squeeze the sizable vehicle easily and safely into a snug but coveted spot. Celebratory fist pumps ensue! 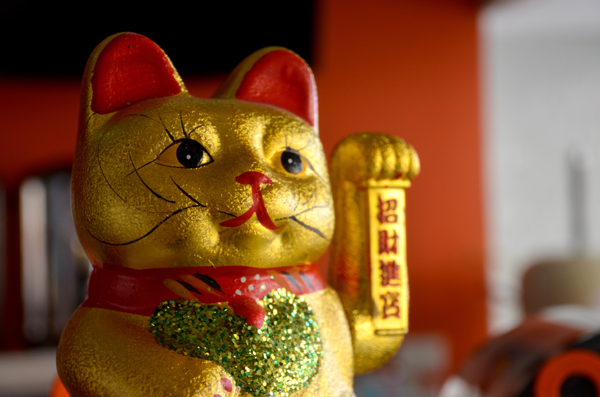 We head straight for Pho Tau Bay and a bowl of Pho Tai (rare beef noodle soup) so enormous that we could take turns doing back stroke in its steaming broth. Mind you, the sliced onion, slivers of raw beef and spring onions piled upon the submerged island of rice noodles might prove a slight obstacle for any aquatic activities. But I digress. 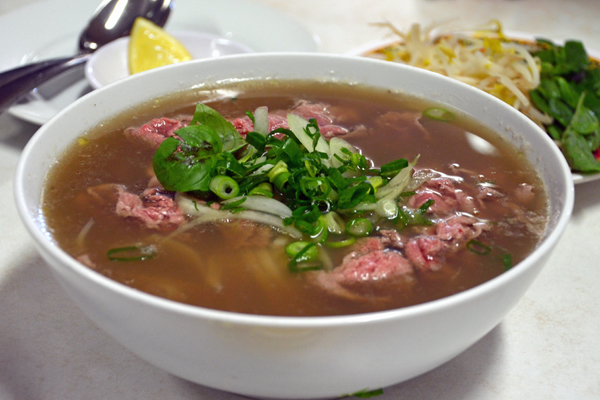 We wander through the shops on John Street, frolic in a playground or two and pop by a couple of House Temples, the cute weatherboard and brick temples festooned with flags and other ornamental offerings. Vinh Nghiem Temple in John Street is my favourite but the red brick number with its cheeky little figurines across the road gets the kid’s vote. 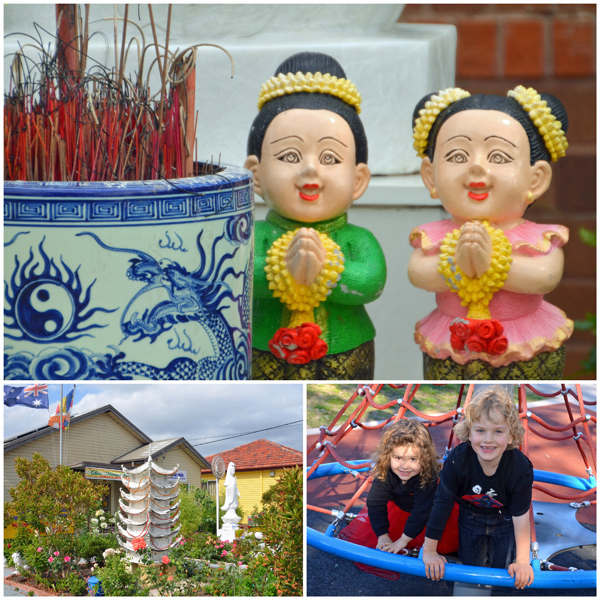 Raffles and Sugarpuff feel like ice-cream so we decide to indulge them Italian style and head to Haberfield, Sydney’s “Little Italy”. I grab takeaway coffees and cannoli from Papa Pasticceria and the kids go two-scoop crazy at Dolcissimo. 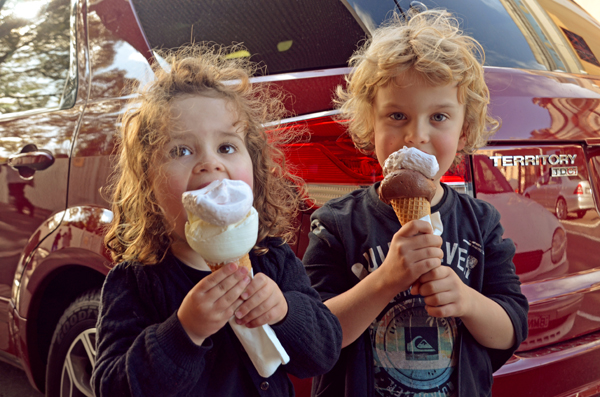 We take the molto deliciosa delights to the leafy Piazza Federazione where the kids play imaginary chess… and drip. 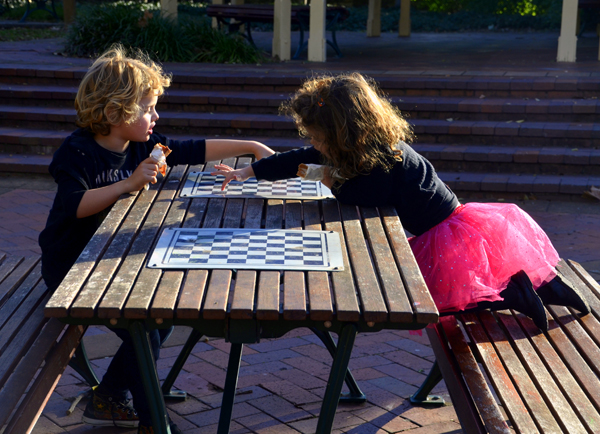 After hosing them off we peruse the aisles of Lamonica, a suburban supermarket so packed with cured meats, pastas and chattering nonnas that it wouldn’t be out of place in Roma. 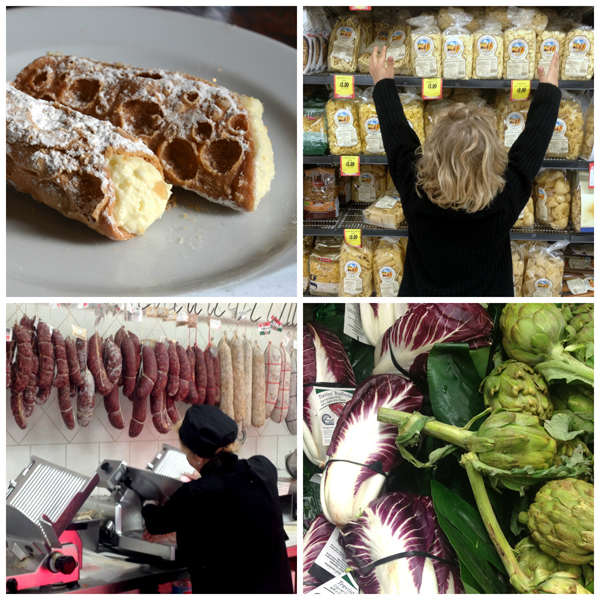 I could lose myself perusing the shelves for hours but the siren call of Terry-Lulu’s built-in DVD player beckons and instead we set the kids up with a movie for the drive to Lakemba.

It’s Ramadan, the Muslim month of fasting and from sunset until the wee small hours, when devout Muslim’s break their daily fast, Lakemba’s Haldon Street comes alive with street food. We’re here not only for the Middle Eastern cuisine but for our children to experience the warm hospitality of the Lakemban locals. 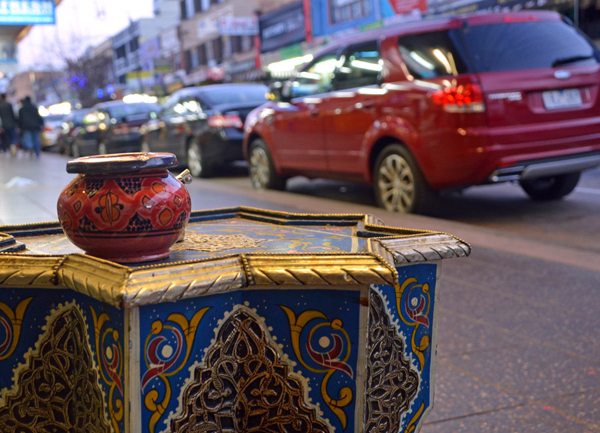 That happens fairly quickly when a kid around Raffles age asks him if he’d like to know about how Muslim’s break their fast. A fascinated Raffles wanders off to discuss secret boy’s business while his parents coo over Sugarpuff and we enjoy a mint tea.

As the sun sets it’s time for camel burgers! 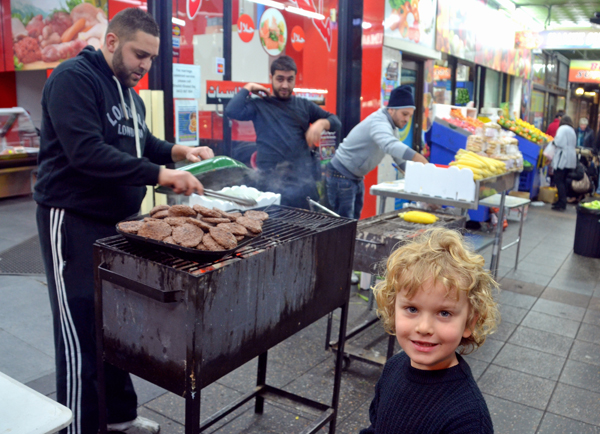 Yes, actual camel. The burgers are a tradition during the Haldon Street food festival and Raffles, after initial reservations, eats two. He claims it’s because the proceeds from the burger sales go to charity, but we all know it’s because he’s a bottomless pit! 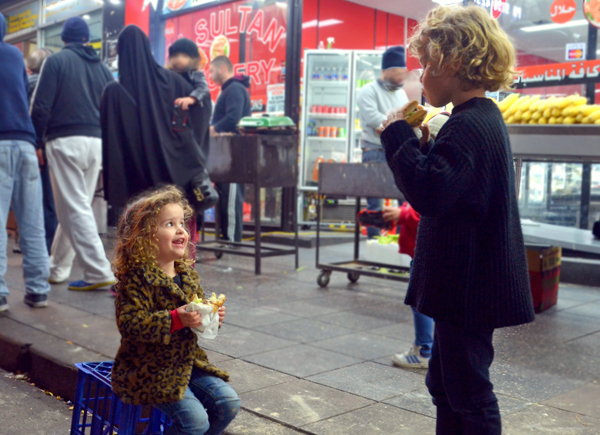 Day two of our culinary world tour and we’re starting in China. Or at least in Chinatown. 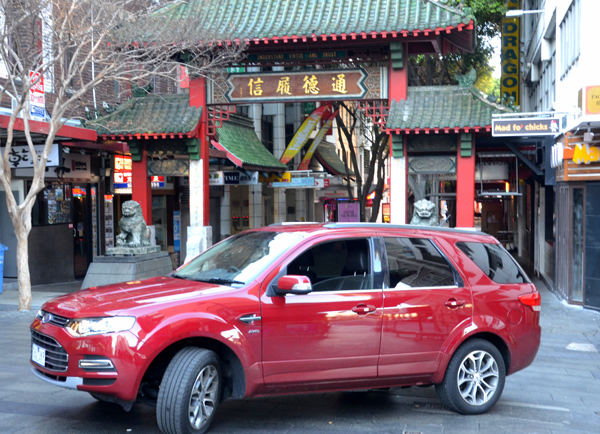 We breakfast on pan-fried pork dumplings, fried you yiao breadsticks wrapped in egg pancake and fresh warm soy milk at Mother Chu’s in Chinatown. I almost wish I had a hangover to do the fried carb overload justice. 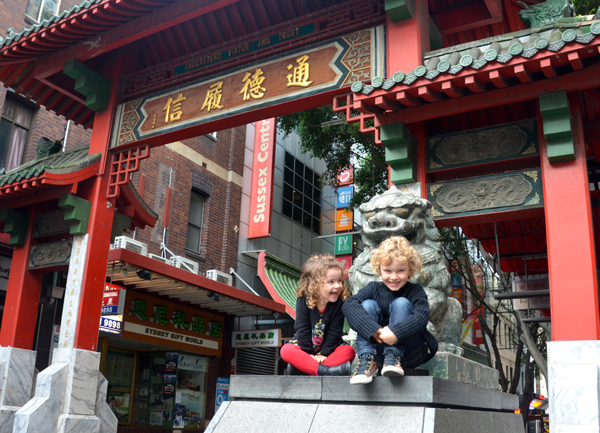 We bump into one of Raffles best friends, whose family has had the same idea. And, after fighting it out with chopsticks for the last dumplings, hit up Chinatown’s produce market. 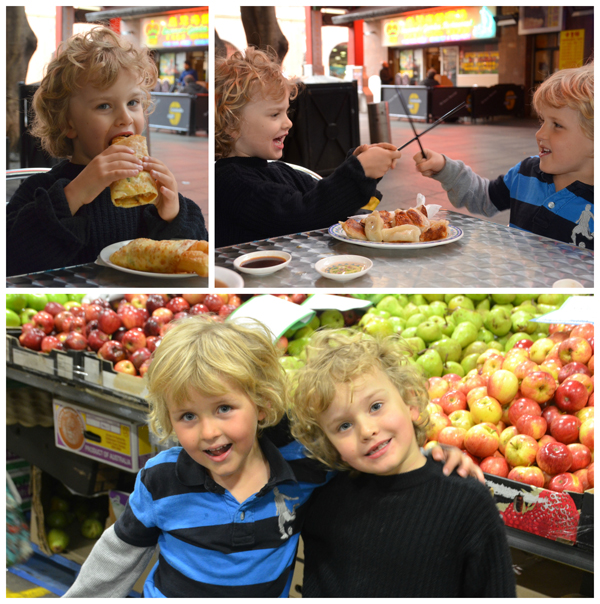 From Chinatown we drive thirty minutes or so to Harris Park for lunch in “Little India”. Here within the weatherboard houses of what seems like a regular suburban neighbourhood are dozens of Indian grocers, restaurants, spice stores and sari shops. 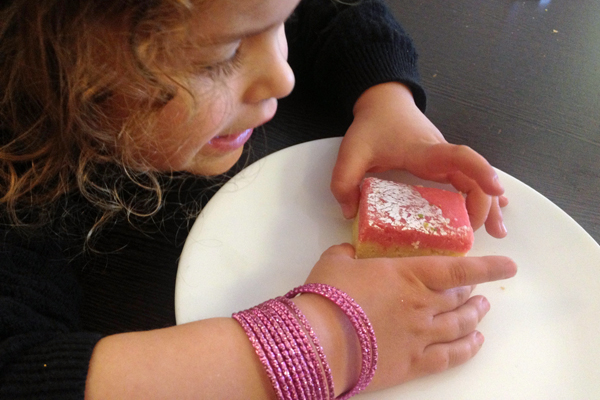 Sugarpuff soon arms herself with dozens of pretty pink bracelets and, jingling all the way, we stroll to Haveli for a South Indian Thali packed with vegetarian delights, the best butter chicken this side of Mumbai and a few pretty pink sweets. 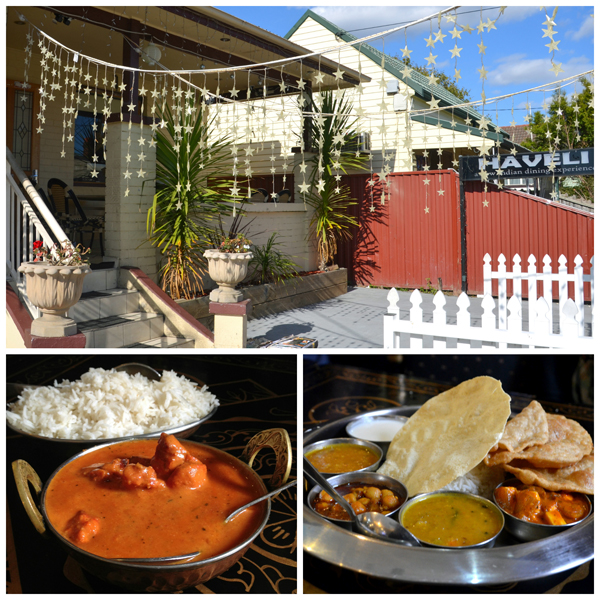 After lunch we set Terry-Lulu’s GPS for Europe, or Petersham, Sydney’s “Little Portugal” for a little foodie window shopping. At Tahlo Portugese Butcher we’re seduced by the chouriço, hanging hams and boxes of bacalhau (Portuguese dried and salted cod fish). 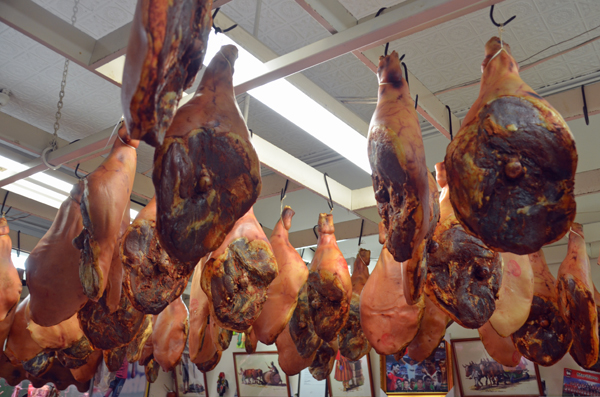 But in all honesty we’re just here for Sydney’s best flaky Portugese Tarts at Sweet Belem and quickly demolish a boxful. 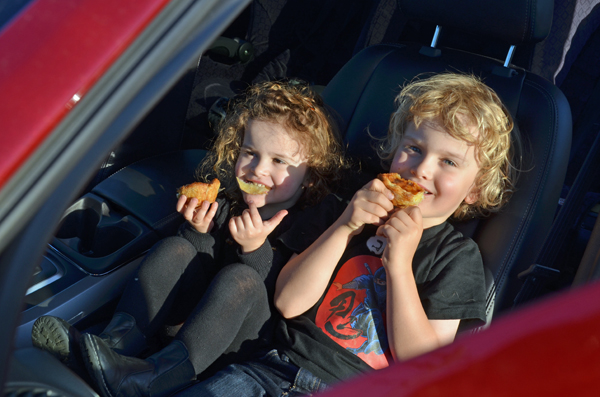 We’ve managed to eat and play our way around six countries in a couple of days but there’s one last stop on our whistle stop world tour. That’s for the not so exotic but definitely iconic Aussie styling’s of Harry’s Cafe de Wheels and their hotdogs and pies – dinner of weary world travelling champions. 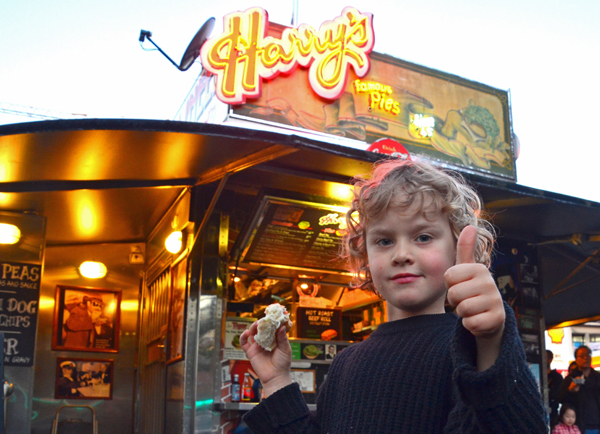 Thanks to Ford Australia and Kidspot we’re delighted to be enjoying our adventures in a new Ford Territory Titanium as part of the Voices of 2014 Paint the Town Ford Challenge. This is the second of three posts we’ll be sharing as we get to know Terry-Lulu over the next six weeks.

40 Comments on A Sydney culinary adventure