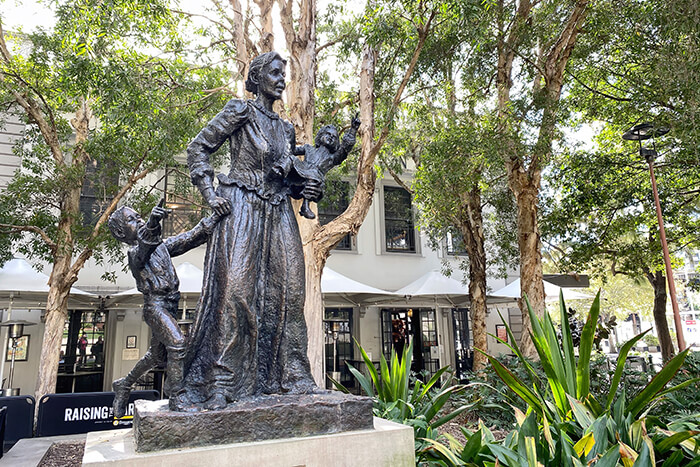 We all know the narrative. In 1770 Captain James Cook and a boatload of intrepid blokes arrived in Botany Bay — the then land of the Dharawal people — on the HMB Endeavour. One of these blokes was the celebrated botanist Joseph Banks, who returned to England with big ideas on expanding Britain’s imperial power.

The blokes in charge must have liked said ideas because 10 years later another bloke, Arthur Phillip, arrived with the First Fleet of convicts and founded Sydney as a British penal colony. More blokes followed, including explorer and navigator Mathew Flinders who sailed to Australia to map the coastline. He had a cat. It was a bloke too.

You get the gist. Sydney was founded by blokes. They settled it, they built it, and they spawned the offspring that would go on to populate it. We learn about them all in school. And, incredibly, they were so ahead of their time they did it all without a single woman in sight. Right?

Not exactly. Contrary to popular historical storytelling, women actually did exist in the old days. And some of them did things other than pop out babies and clean. Amongst these fantastical unicorn beings were powerful women who played a key role in shaping the Australia we know today. We just don’t hear about them.

Enter top bloke, Simon Phillips of 24 Hours in Sydney, and ‘Skirting Sydney’, a new walking tour of Sydney he created after his mother challenged him to create a tour celebrating the pioneering women you’ve probably never heard of.

Inspiring and insightful, Simon shares tales of discrimination and determination from the women who would shape the Sydney we live in today. His two-hour tour takes us to the very sites where some of the most extraordinary women from Sydney’s past lived, built, entertained, broke glass ceilings and battled for women’s suffrage and equality.

We start at the Pioneer Women’s Memorial, located in the Jessie Street Gardens behind the Paragon Hotel. Unveiled in 1988, the bronze sculpture of a random woman carrying a baby in her left arm while leading a young child in the other was erected to acknowledge the contribution of women to the colonisation of Australia. All of them. In a single statue. There’s also a Second World War Servicewomen Memorial at the back of the gardens. The only one in the city. They stand in stark contrast to the hundreds of hulking great bronze effigies of James, Joseph, Matt … and his cat, and a bunch of other “great” dead white blokes, scattered liberally throughout central Sydney.

Indeed, the only non-fictional woman depicted in statuary in Central Sydney is Queen Victoria, who never laid her regal foot on Australian soil. I must add that Mrs Macquarie’s Chair is a monument to Elizabeth Macquarie, the wife of the fifth and last autocratic Governor of New South Wales, Lachlan Macquarie. Though rather than immortalising her likeness, she’s represented by a chair… because how else would a woman want to be memorialised than as a spot for some bloke to plant his arse. Anyway, I digress.

Luckily, the lovely Simon does not.

Simon tells us about May Hollingworth, Sydney’s first female theatre director, who went on to direct 120 productions including Shakespeare’s Twelfth Night, and founded the Metropolitan Theatre on nearby Reibey Street.  Interestingly there is a massive statue of literary bloke, Shakespeare, right here in Sydney, though he died 154 years prior to Captain Cook arriving. May, on the other hand, scored only a small plaque hidden behind a shrub on the wall of the pub.

Speaking of Reiby Place, you might have heard of Mary Reibey, she’s the non-bloke on our $20 note. Transported to Australia for stealing a horse, Mary went on to become a hugely successful merchant, shipowner and trader. All whilst being an actual woman. She was the original multi-tasking mama, juggling her numerous business enterprises whilst raising seven children alone after the death of her husband. The Bank of New South Wales (now Westpac) was founded in her house in Macquarie Place, though only after she negotiated a lucrative shareholding. Beyond the misspelled street sign, there is no other memorial to her anywhere in Sydney.

We’ve barely walked 100 metres when we’re introduced to the incredible Florence Taylor, the first qualified female architect in Australia. A woman who would not only build a thriving practice but, with her husband George, become a founding member of the Town Planning Association of New South Wales, and a successful publisher of building and engineering tomes. Despite her accomplishments, her inability to bloke meant she was refused admission to the NSW Institute of Architects for decades.

We learn about the utterly fabulous Louisa Lawson who, in 1888, established and edited The Dawn, a powerful newspaper advocating for women’s rights. She’s sometimes remembered as the the mother of a bloke, Henry Lawson. Indeed it was she who educated and honed her son’s legendary storytelling skills as he trained by her side on the paper.

We meet the magnificent Millicent Preston Stanley, the first woman elected to the NSW Parliament who, upon being called a battleaxe (because toxic masculinity was still the ordre du jour in 1925), replied, “A battleaxe is a pretty useful weapon if it’s kept sharp and bright.” I think she and I would have been firm friends indeed.

As we continue our wanderings through the streets of Sydney we’re introduced to a further catalogue of extraordinary non-blokes, most relegated to footnotes in the history of our city due to their unforgivable lack of a Y chromosome. 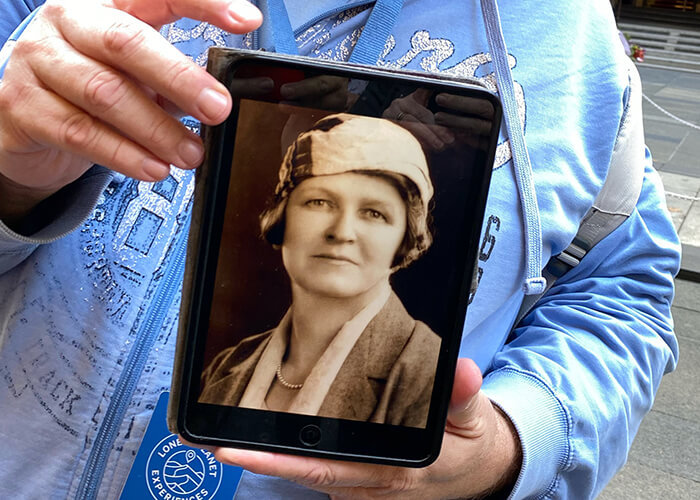 Among them there’s Esther Abraham, a convict transported on the Lady Penrhyn, part of The First Fleet, who would end up as First Lady of the colony for a short time, and Lucy Osburn, mother of modern nursing in Australia. We’re introduced to Dr Mary Booth, who founded the still secretive Women’s Club in 1901; Lady Jessie Street, pioneering feminist and campaigner for Indigenous Australians; and Maybanke Anderson, Educator, suffragette and social reformer. And I fall a little in love with Roxy Barton, an actress and wanderer who paved the way for women like me to travel the world and seek adventure.

I have to make a special mention of the unstoppable Ada Evans, a legal pioneer who fought for almost 20 years for the right to be admitted into practice. Ada would end up the first female lawyer and female barrister in Australia. But here’s the twist! Today, 16 May 2021, marks the exact day of the 100th anniversary of her admission to the NSW Bar.

We finish up at Government House, where we learn a little more about Elizabeth Macquarie, namesake of the aforementioned memorial chair. As well as being a bloke’s wife, she played a significant role in the establishment of the colony taking an active role in instigating, designing and supervising many public works programs, including the Royal Botanic Gardens, despite her complete lack of testicles.

A walking tour for everyone

There are so many more women to meet and stories to be heard on the Skirting Sydney walking tour, and I implore you to go and learn about them. But don’t think this tour is just for women. It’s a fascinating insight into the city we live in, and you can even bring a bloke along. I promise they’ll like it.

It’s so good that I’m already planning a return trip with my kids. Not only to empower my tween daughter with the knowledge of just how formidable and fabulous we women are, but to further educate my self-proclaimed feminist teenage bloke-child on the rights of women to equality in society, politics and work.

Oh, and in sculptural equality…  because if we’re being totally honest, the city could do with a few more bronze babes (of the revered and sculptural variety) to balance gender representation.

Disclosure: I was a guest of 24 Hours in Sydney for theSkirting Sydney tour but all bloke baiting, equality endorsing and opinions are my own.