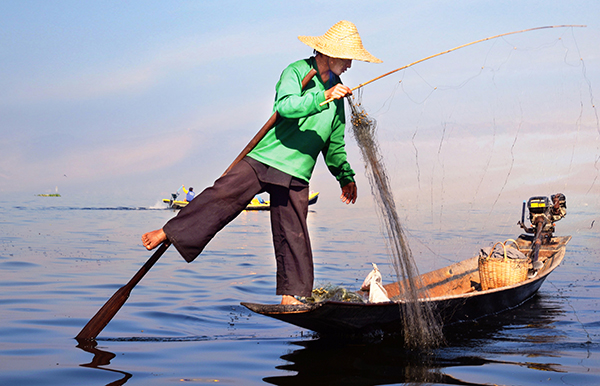 We’re leading a small flotilla of long boats across Inle Lake, the machine gun rat-ta-tat of their engines shattering the silence in this serene water world, almost as much as the squealing “woohoos” coming from Raffles as we rev up and race our way across the freshwater lake.

Strewn with marshes and floating gardens, and skirted by teak stilt-houses and pretty temples, the sprawling freshwater lake in Myanmar’s eastern Shan province is home to around 200,000 people. 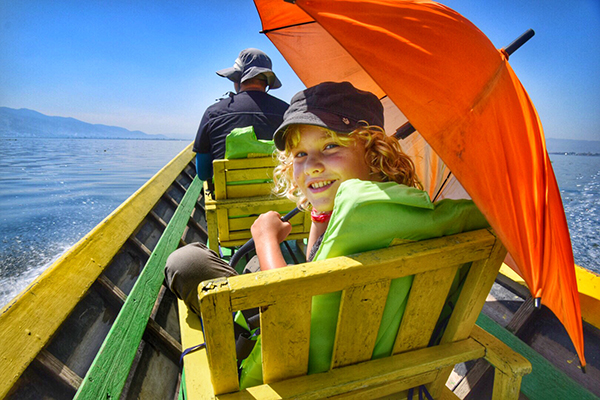 Many of whom may be suffering hearing issues following Raffles’ excited bellows. 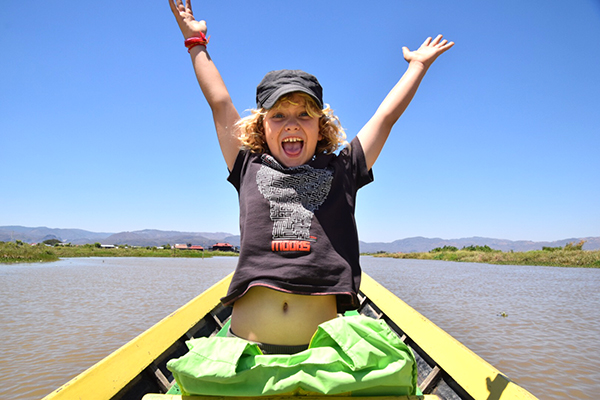 While Inle Lake itself is jaw dropping, it is the Intha, meaning “lake people” in Burmese, that make the biggest impression. We motor through the lake’s vast openness past fishermen trawling its carp-filled waters, balancing on one leg as they reel in their nets. The Intha fishermen have become the lake’s accidental celebrities, their incredible balance and distinctive one-legged rowing style resulting in them becoming the most popular target of the tourist paparazzi… ourselves included. 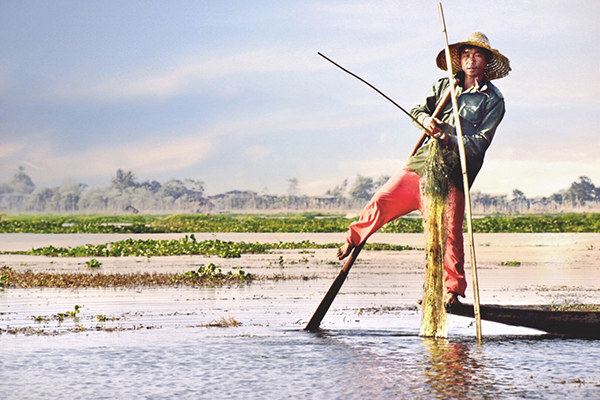 When we pass one fisherman, who is rocking some particularly colourful trousers, Raffles announces that they remind him of flamingos, which in turn reminds me that my son is a bit odd. But in his defence, I guess there is a bit of a resemblance.

We chug along its narrow winding canals, through bamboo damns and gates, where locals tend to fruit and vegetables in their hydroponic lake gardens, to harvest, haul and sell at the local markets. 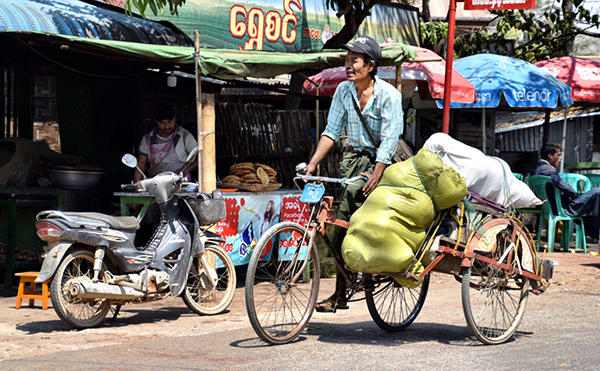 We’re lucky enough to have timed our visit to coincide with Mingalar Market, a busy five-day market in Nyaung Shwe. Here Thanaka-enhanced women hawk their wares of dried fish and sweets, and fry up delicious local treats over giant cauldrons of oil. 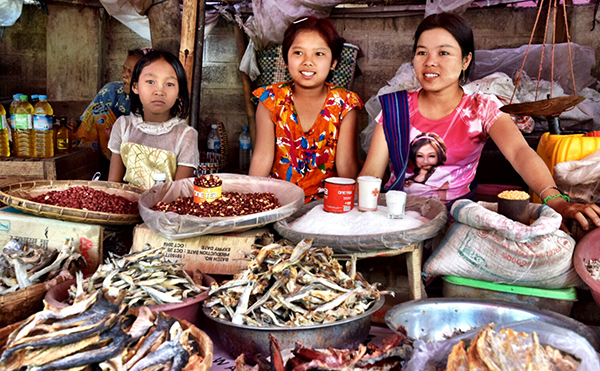 We nibble on delectable Mont Lin Ma Yar (husband and wife snacks), crispy rice pancakes stuffed with chives, which are so good we go back for seconds. Raffles noshes on some sticky sweet concoction that resembles poo but tastes, he says, like heaven. 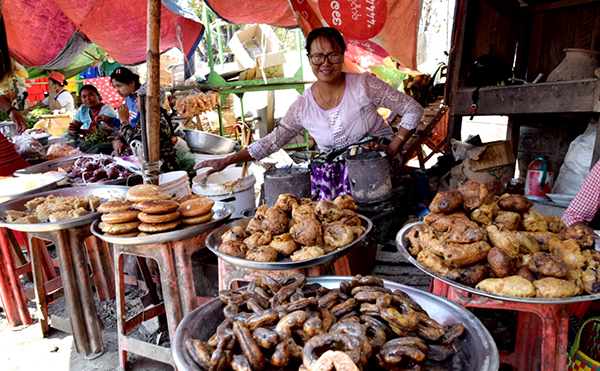 I can’t confirm or deny this, as I’m not going anywhere near the thing. But I can attest for the amazing samosas, which are clearly laced with some kind of addictive chemical as I can’t stopping eating them. Thank goodness for Raffles, who stages an intervention, wrenching the remaining samosas from my hand and stuffing them in his gob.

We continue to out glutton each other until Raffles finds his food fest halted by one of the lovely locals who paints his face fetchingly with Thanaka (an off-white cosmetic paste made from ground bark). 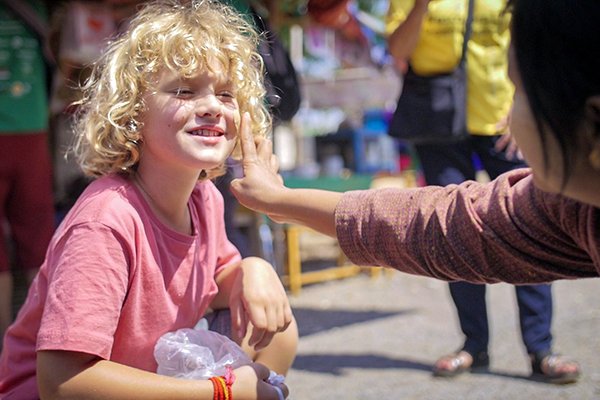 I use the opportunity to stock up on all the fresh and fermented ingredients we need for a hot date we have with a local chef.

We arrive soon after at Nyaung Shwe’s The Shan Restaurant at ViewPoint Lodge. Located near Talk Nan Bridge and Canal, we soak up views of the lake and watch the boats roaring by from the upstairs balcony. We are here to be taught how to use the produce we’ve procured to prepare national dish, Laphet Thoke (pickled tea leaf salad), a mouth-watering concoction of fermented tea leaves combined with chopped cabbage, dried shrimp, fish sauce, lime, dried garlic, roasted nuts, tomato and chilli.

Raffles, being Raffles, turns our cooking lesson into a display of ninja theatrics but actually does a great job chopping and mixing up the ingredients. 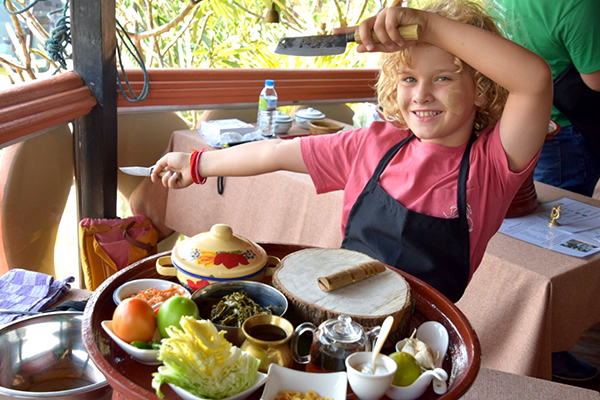 We’re both equally enamoured with the salty, sour, spicy, crunchy and thoroughly irresistible end result… and the fact that Raffles has managed to make it through the lesson with all his fingers still attached, despite his flamboyant knife work. 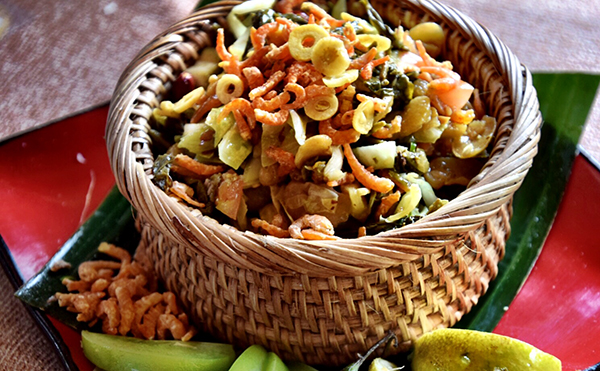 We pile back on to our long boat and head out onto to a wide stretch of Inle Lake for an epic surprise – a once in a lifetime lunch of artfully prepared local cuisine, served in a floating dining room made from a couple of converted wooden rice carrier boats in the centre of the lake.

It’s a little unorthodox but we’re thrilled by our surreal dining quarters and devour luscious local cuisine over a leisurely lunch, beautifully prepared by the talented chefs from The Shan and served to us by their wait staff by boat. 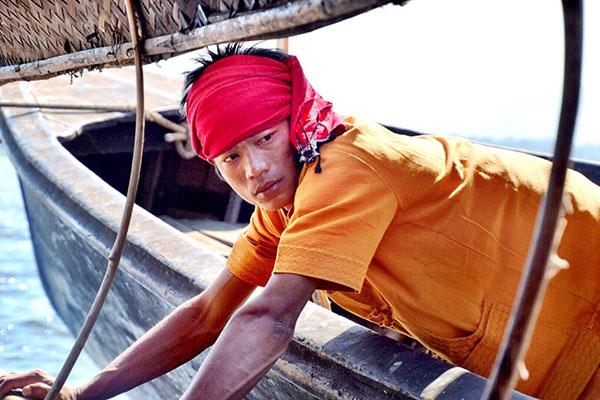 We dive straight into sour and salty curries and an assortment of pickled stuff of indiscriminate origin before we’re served random but delectable things on sticks. 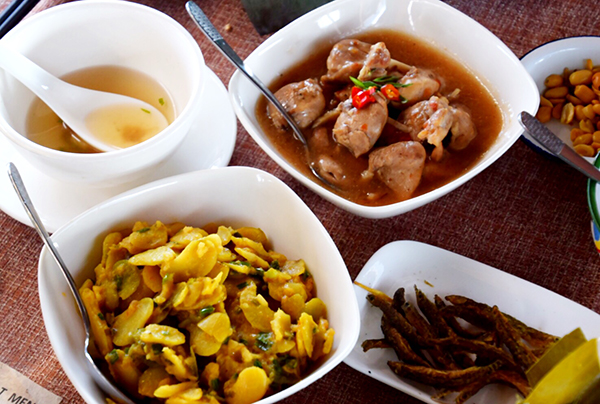 Raffles only comes up for air long enough to take a visit to the floating commode! Yep, that’s right they’ve thought of everything here and there’s even a boat discreetly hovering who chugs across to collect anyone who needs to answer nature’s call. Raffles, in his usual charming way, dubs the boat the Poo Patrol. 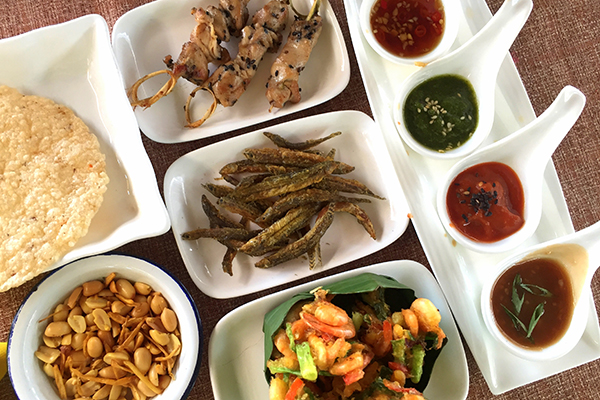 After he returns from his bathroom adventures, we inhale crispy and light prawn studded vegetable fritters and wallow in plates of mango pudding. 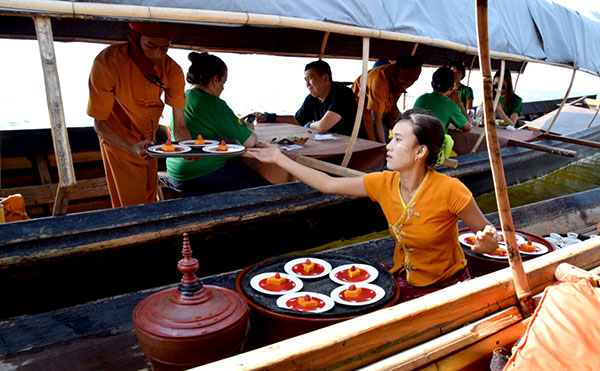 Stuffed and sated, we return to our long boats to chug along the lake through bamboo-dammed canals and lush gardens. 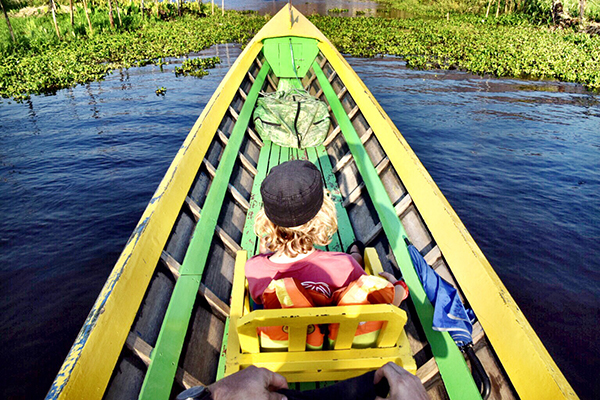 We meander up a narrow corridor of hydroponic gardens until the clanging of drumming and cymbals announces we’ve reached our hotel, the Novotel Inle Lake Myat Min, where we follow the green and blue trail of hydroponic gardens until we reach the jetty of the Novotel Inle Lake Myat Min, and the next part of our adventure awaits.

MYANMAR WITH KIDS  – NEED TO KNOW BEFORE YOU GO

When to visit
November to February is the best popular time to travel with little rain and less humidity.
Language
Burmese
Currency
Burmese Kyat
Power
The standard voltage is 230 V and the frequency is 50 Hz. Several power sockets styles are used so our recommendation is to take an all in one international power adapter
Visa & Passport Requirements
Visas for Myanmar are required by Australian, US, EU, British & Canadian Nationals. You will require a passport with 6 months validity and can apply for a 28 day eVisa online but must enter at Myanmar at Yangon, Nay Pyi Taw or Mandalay international airports or at Tachileik, Myawaddy or Kawthaung land border checkpoints.
Health
Mosquito borne diseases are a risk in Myanmar. When travelling with children prevention is best so apply child-safe insect repellent (with no more 20% DEET) at regular intervals and make sure they are dressed in long but light clothing at all times. While there are no essential vaccinations for travellers to Myanmar, we suggest visiting your family GP at least six weeks before travel for up to date advice on immunisations.
Food Safety
Avoid tap water, raw foods and food stalls with dubious hygiene standards, and avoid tummy bugs by following our safe eating mantra of “cook it, peel it or forget it.

Disclosure: While we had to work for it, competing in and completing challenges, Raffles & I were hosted by the fabulous folk at AccorHotels, Scoot Airlines, Tiger Air and Asia Holidays during the incredible Myanmar leg of our #escapers17 adventure. However, all opinions, snack gobbling and ninja chefery are our own.

8 Comments on Inle Lake: Fast boats and slow food in Myanmar with kids