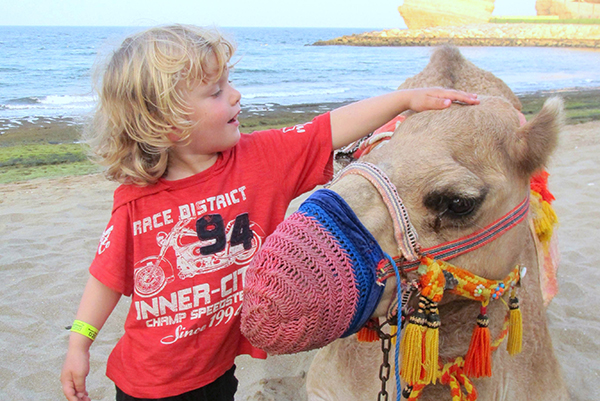 Traipsing through a foreign airport with two small people at 4am, after ten hours in transit, is the kind of behaviour that I’d ordinarily suggest parents be given some pretty intensive therapy for. But on this occasion (and with little choice in the timing) the tiny travellers are doing us proud, having pretty much snoozed through the entire experience.

In fact, they’re still snuffling and snoring in sweet oblivion as we are chauffeured from Muscat airport to our resort at a maniacal 140km p/h, our taxi driver obviously having taken a wrong turn at Dakkar. Mr Eats World and I are, however,  wide awake and wondering if, unbeknownst to us, our flight has been diverted to a galaxy far, far away…

As the breaking dawn further reveals the mystical Middle Eastern landscape (flashing by though it is at warp speed) in all its otherworldly glory, we’re pretty certain that we’ll stumble across a Skywalker or two. 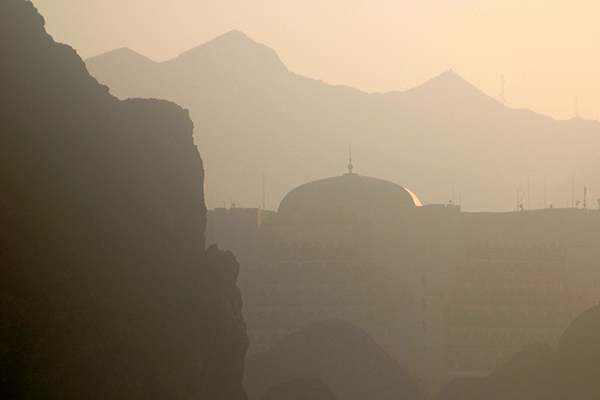 To our great surprise and eternal relief we reach our resort alive, having broken several land speed records along the way. The amazing Shangri-La Barr Al Jissah Resort & Spa is all date palms, fortified rooftops, stone and sand and we are quietly convinced the driver is a confused bounty hunter who has mistakenly delivered us to the Mos Eisley Cantina*. 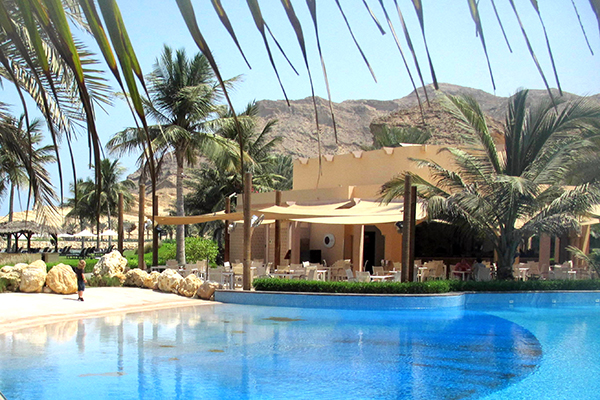 Intergalactic imaginings aside, our resort really is out-of-this-world. As is the experience of checking into our room/palatial suite to be greeted by our butler. And while he is no C-3P0 we immediately fall in love with our personal protocol droid. He merrily hunts and gathers and indulges our every whim – from fetching fresh pomegranates and plums for Raffles and a bottle washer and delivering a prettily perfect high-tea each afternoon and  middle eastern inspired (and entirely delicious) pre-dinner canapés and drinks each evening, right through to advising us on the perfect Muscat itinerary and play dates with camels. 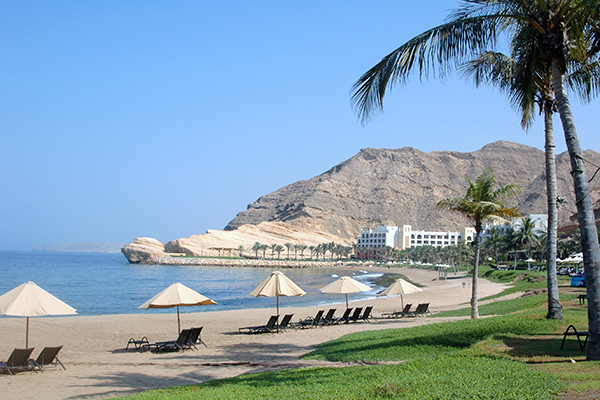 So attached do we become to our new friend that we fear we can no longer live without him and surreptitiously search for the best place to insert a microchip to ensure his lifelong loyalty.

The kids, though not as impressed with the droid as their parents are, are still thrilled with our temporary abode and it’s dramatic waterfront location on the Gulf of Oman. A giggling Sugarpuff enjoys her first taste of sand (and by taste I mean she literally consumes buckets of the stuff) on the resort’s beach which, after sundown, gets handed back to some harder shelled babies (dozens of teeny turtle hatchlings – sqeee!).

Raffles is beside himself when he spots his old friend “Horsey” the camel on the beach. 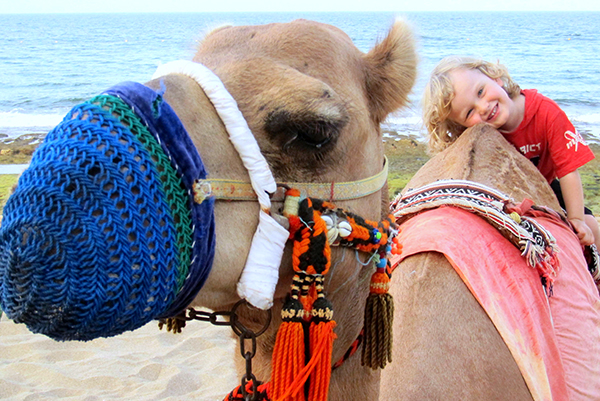 Convinced it is the very same camel he once rode at a Sydney food fair, he throws himself at the dribbling dromedary before riding his farting and belching pal along the sand. When we can finally tear our nutty pre-schooler kicking and screaming from his phlegmy and flatulent BFF,  we make a mental note that we may need to kidnap the camel as well as the butler and that our excess luggage charge is  going to seriously suck.

As darkness falls we dine on Middle Eastern Mezze under the stars. The tradition of mezze extends across most Middle Eastern countries – it’s name most likely coming from the Turkish word meze or Persian word maze  – meaning to taste or snack. And snack we do.

Whether it’s the setting, the soundtrack of live music or the scent of frankincense burning in the air or simply that fact that it’s great food that makes this meal so special I cannot say, but it is amazing. And tiny tastes of so many different dishes is an ideal way for a small boy to test a new cuisine. 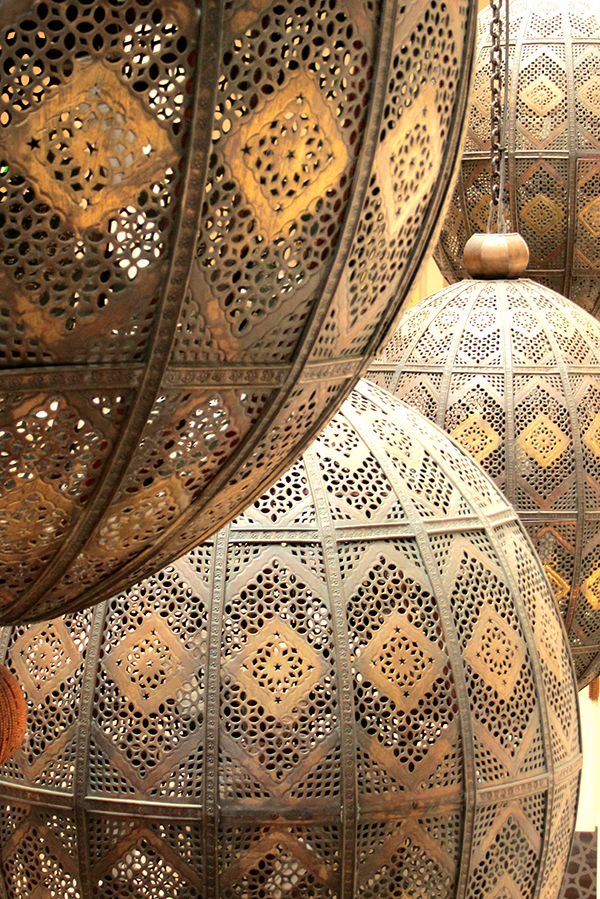 Happily, Raffles relishes the local flavours. He’s particularly digging dipping the tasty local flat bread into hummus and using it to wipe up the oily remains of the garlic prawns. And he gnaws away like a happy beaver on a platter of skewered meats. Seriously, what boy doesn’t love meat on a stick? Dates and sticky halwa – a gelatinous dessert made from sugar, eggs, honey and spices and scented with rosewater – sweetly completes our meal.

Energised by his dinner, Raffles dances dizzily to the live soundtrack of traditional tunes as locals suck back shisha pipes and quite probably question if the aromatic tobaccy they’re smoking is of the whacky variety – for surely our small blonde nut-job is an hallucination. 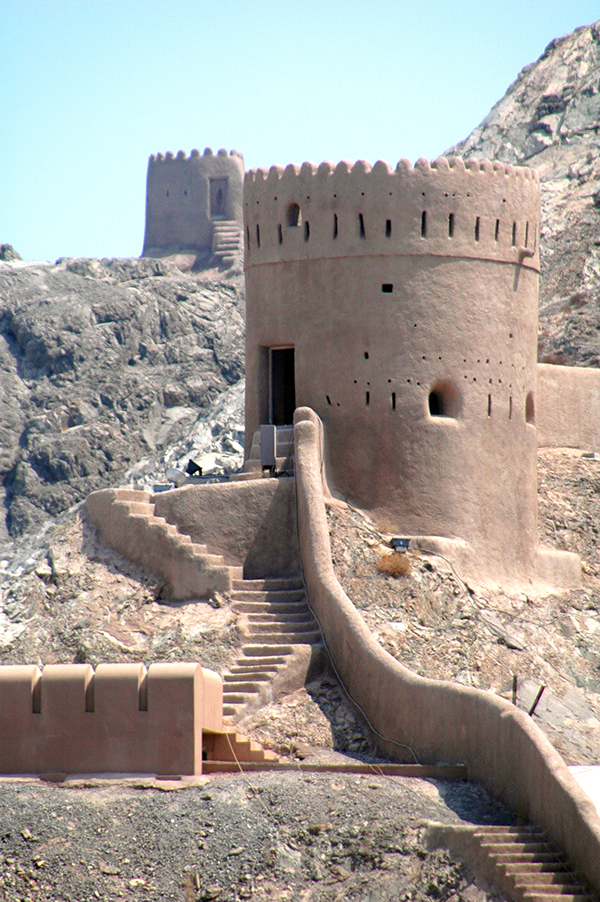 We found so many things to do in Muscat and quickly became smitten with this city of forts, frankincense and fabulous food. 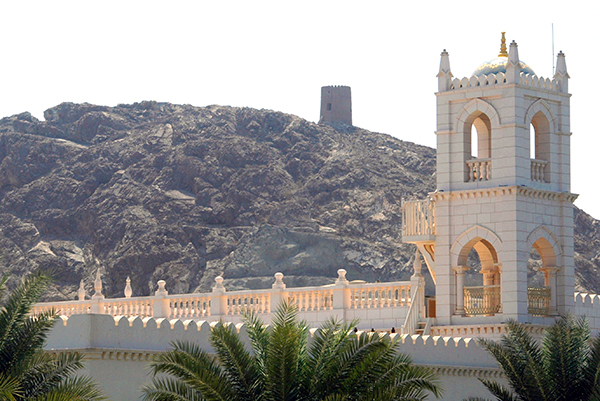 Of particular appeal is that Oman’s capital has given the proverbial bird to the mine’s-bigger-than-yours ethos of some of its neighbours.

Instead the country has taken a forward thinking approach to development that is reverential to both the ecological and cultural heritage of the country. 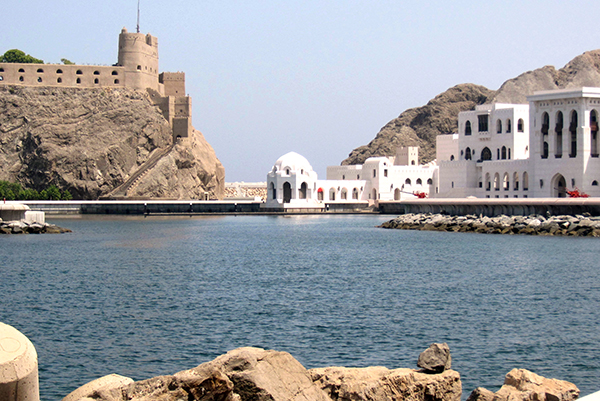 Our driver, Hassan of the blessedly air-conditioned car, proudly escorts us around the super ’70s styled Sultan Qaboos’ Palace. 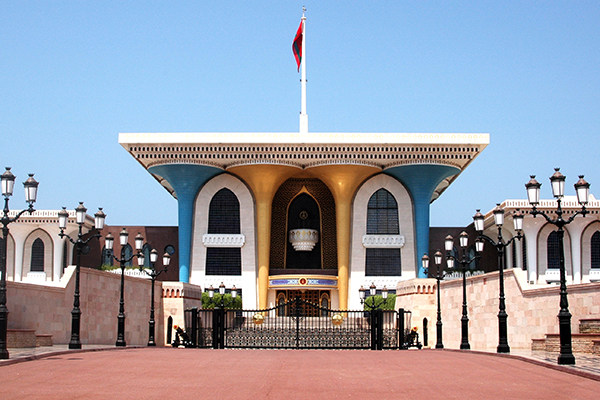 Then on to the extraordinary Grand Mosque. 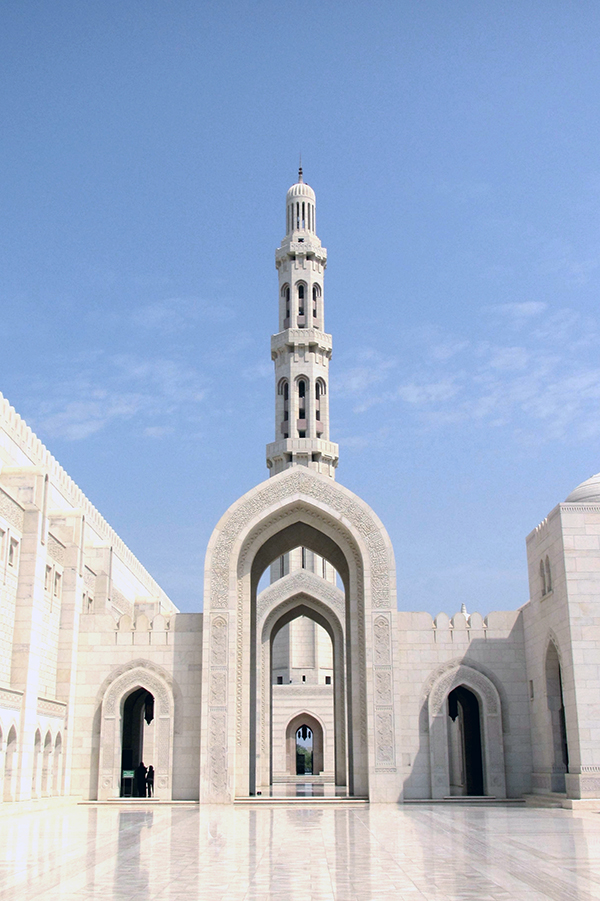 Its 4,343-square-metre hand-woven prayer carpet and eight-tonne Swarovski crystal chandelier (that dangles as decorously as an earring at the Oscars) are jaw-dropping, to say the least. 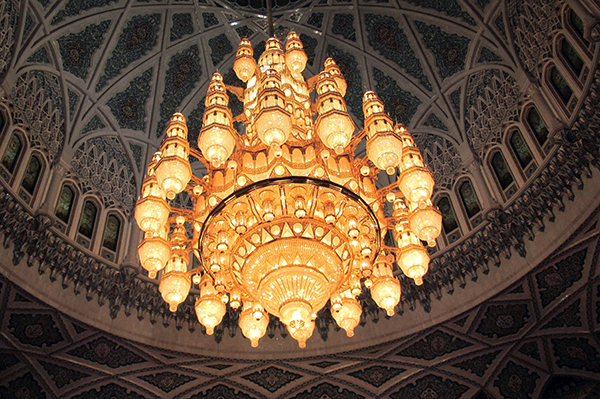 Irrespective of religious convictions, one can’t help but be impressed, particularly given that it was built and paid for out of the pocket of the benevolent Sultan – who also shouts healthcare and education to his tax exempt people. 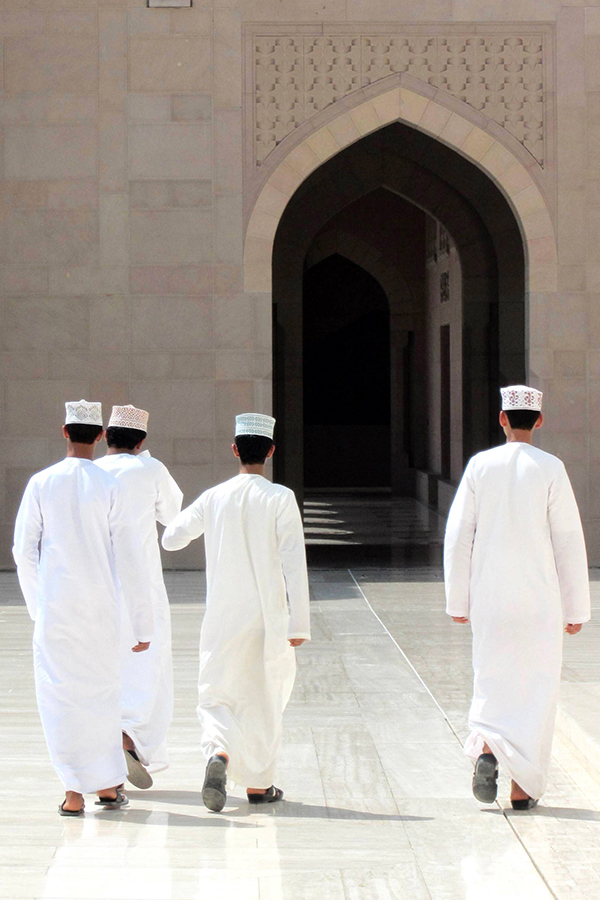 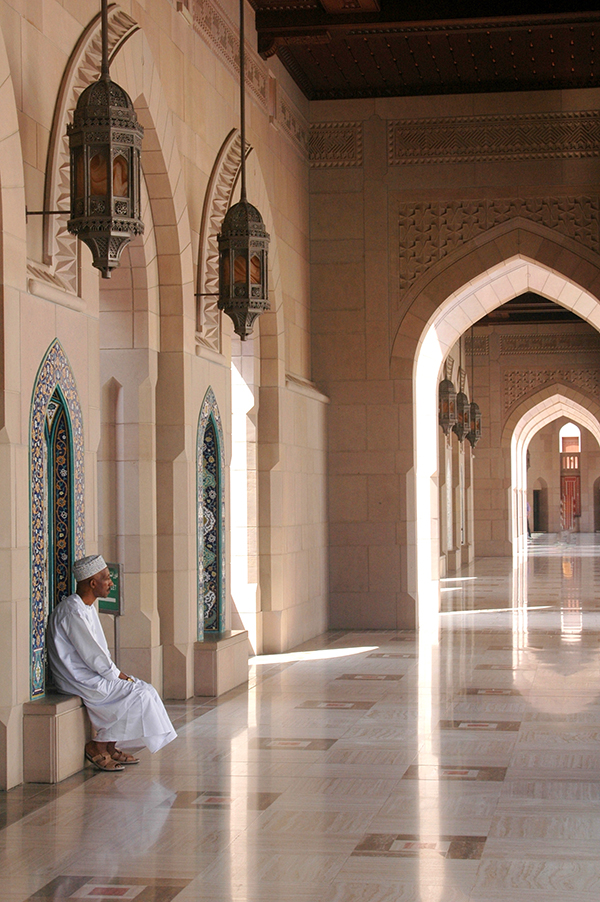 At Muttrah Souk, a chaotic maze of alleyways is an Aladdin’s cave of treasures and trinkets, Raffles determinedly rubs lamp after lamp, convinced that at least one must be harbouring a blue genie voiced by Robin Williams. 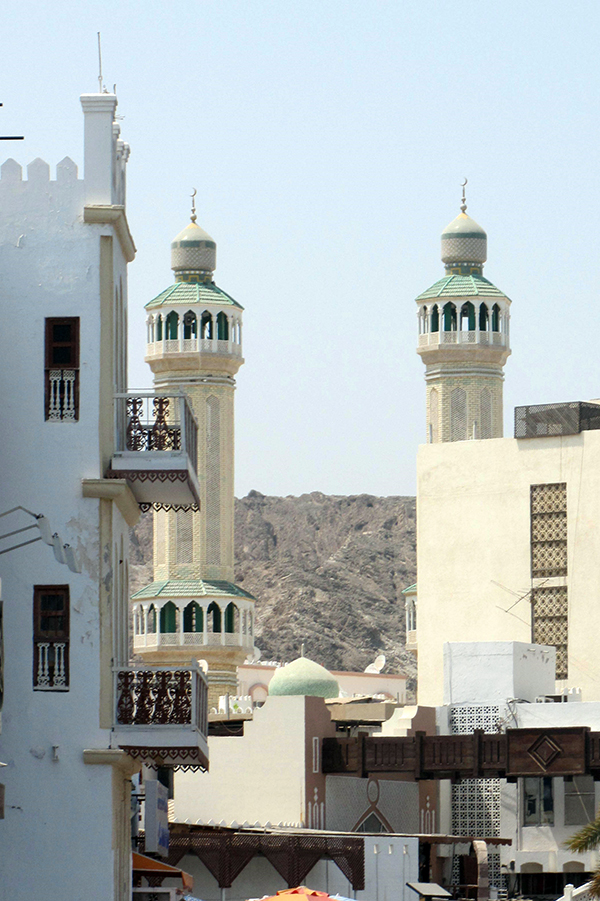 I, already being wed to a hirsute comic, figure that one per household is enough and instead have my eye on one of the decorous but dangerous khanjars – the traditional weapon of Oman. 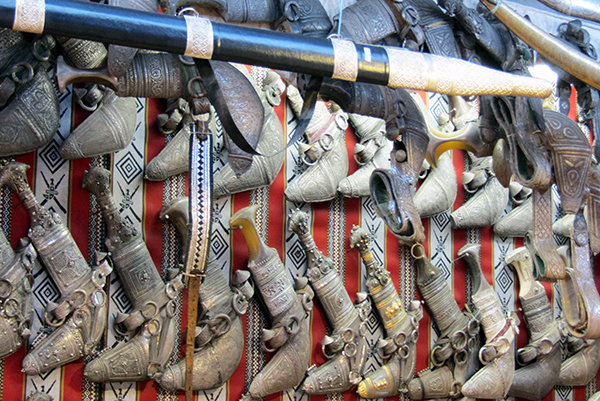 So, unfortunately, does Raffles. Struggling to convince him of the idiocy of a sharp and pointy lethal weapon as a plaything for a pre-schooler, I am relieved to stumble across a benign plastic replica perfectly proportioned for a small sociopath and his wild imagination.

Kiddy khanjar carefully strapped to his waist, Raffles/Aladdin quickly goes off on one – taking on some imaginary villains with a dramatic display of martial arts much to the bemusement of the local merchants, to whom a small blonde curly-haired nutter engaged in a frenzied capoeira/comedy hybrid is a rare occurrence.

We, on the other hand, already acclimatised to his psychotic stylings, barely raise an eyebrow and instead concentrate our attentions on the bounty of spices that are sold straight from the sack.  The scent of cardamom and coriander competing with the ubiquitous scent of smouldering frankincense resin creates a pleasant olfactory overload. 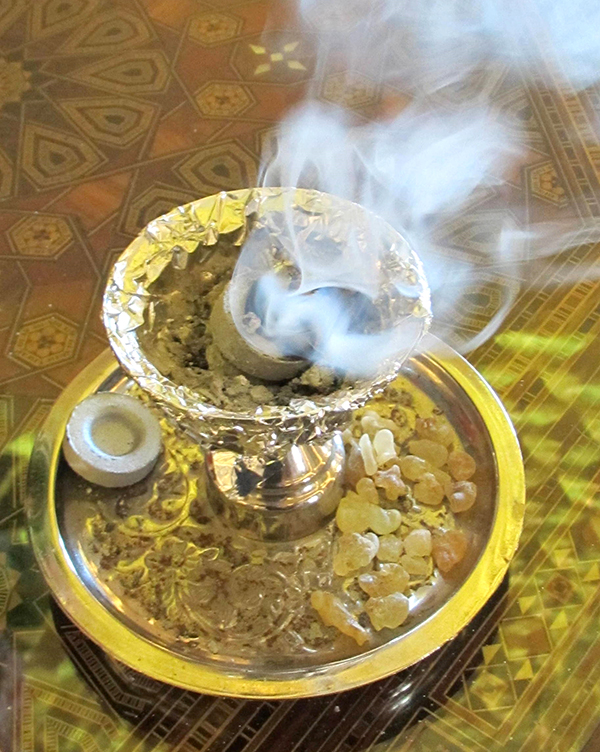 As we exit we grab a snack of shwarma – a grilled meat-filled pita that is Muscat’s street-food staple. Raffles declares it “delish”. 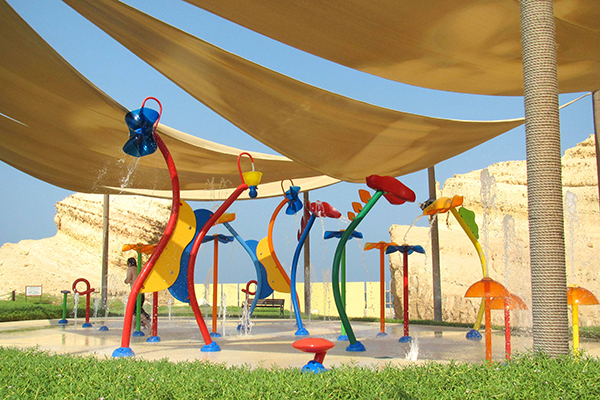 It is steaming hot so we spend plenty of time in the resort’s massive pool(s), frolicking on the fabulously fun splash pad (where Sugarpuff delights in the spraying and spilling water) and floating down the lazy river at the resort.

The place is a literal Shangri-La for families. As we play, our beloved protocol droid organises yet more activities to keep us all entertained, a highlight of which is an afternoon of sailing the high seas in a Dhow. 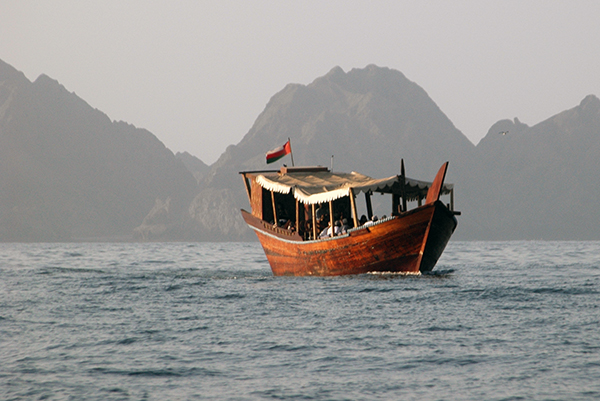 An excited, and apparently identity disordered, Raffles is now channeling Sinbad and is keen to fight off any sea monsters that we come across. 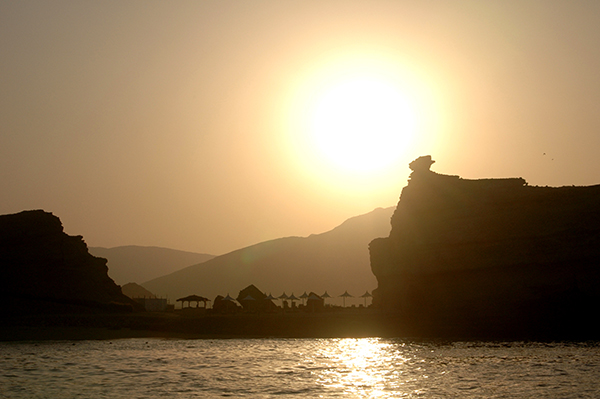 Luckily, monsters are in short order and instead we find ourselves surrounded by dolphins. Zillions of them and their calves (or “dolphettes” as they are dubbed by the little loon) leap exuberantly about us. Just wow. 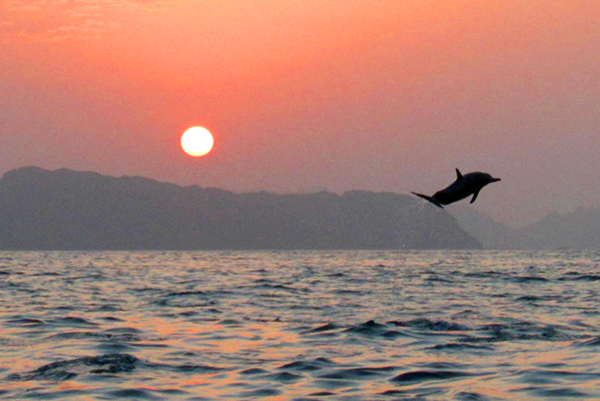 A final feast of amazing curry at the resort’s Al Tanoor restaurant  (when it comes to dining in Muscat, Indian food is plentiful and good, due to the large number of Indian expats living there) and it is sadly time to pack our bags. 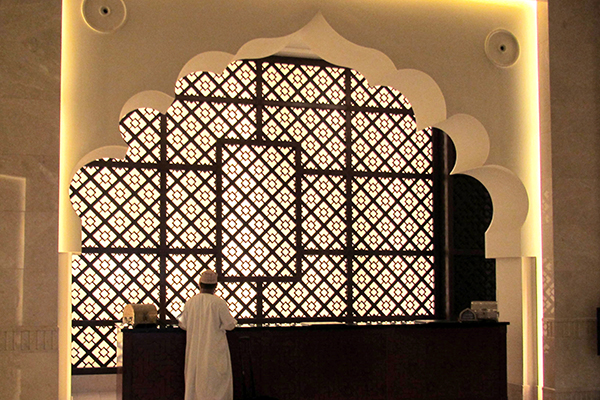 Our visit to Oman has left us smitten, but the last word belongs to Raffles who, as we bundle our luggage  into an airport bound taxi (hoping that customs won’t notice the butler we’ve stashed in the suitcase lining or the camel jammed up Mr Eat World’s arse), sobs  “I wish we could live here forever!”

If only we’d found your genie little man.

If you’d like to explore further afield, you can find some of the other great things Oman has to offer families here.

*Apologies for the superfluity of nerdy 70’s Star Wars references that I realise may be lost on those folks less geeky or ancient than I.

17 Comments on Oman with kids: May the forts be with you