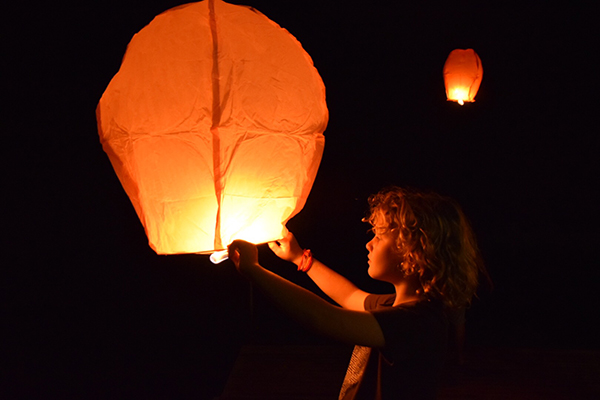 The long boat splutters its way past a fisherman in the soft light of late afternoon before chugging its way down a lush, garden strewn corridor.

We follow the green and blue trail of hydroponic gardens until we reach the jetty of the Novotel Inle Lake Myat Min, where a cacophony of clanging cymbals and drums greets us. 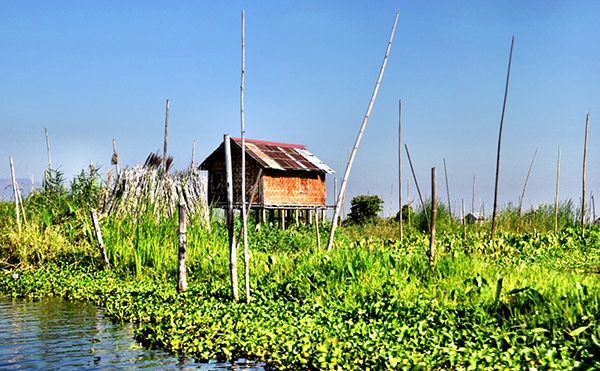 It’s quite the noisy welcome but certainly puts a smile on Raffles’ face and he dances his way off the boat. Within moments we’re in a golf-buggy winding away past blooming frangipani trees through a labyrinth of elevated pathways until we reach our stunning stilted overwater villa. 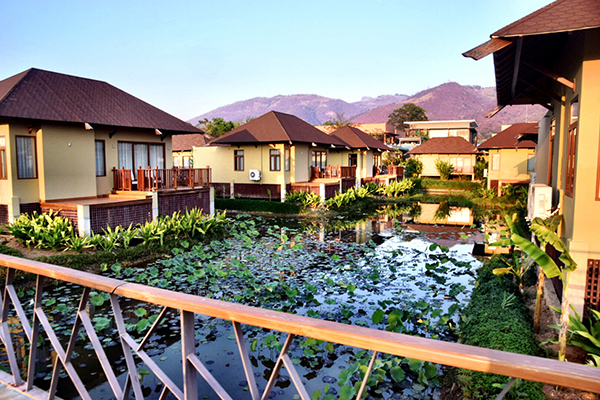 We’re kinda gobsmacked by the enormity of our luxurious digs and wonder if there has been some kind of mistake. But we’re not going to let on, just in case because this place is all sorts of fabulous! The villa combines just the right balance of Burmese charm with modern comforts and we quickly make ourselves at home.

There’s a separate living and sleeping area, and incredible views of the lush water gardens and surrounding jungle from the private balcony where we gobble up the sweet tapioca treat that’s been left to welcome us. 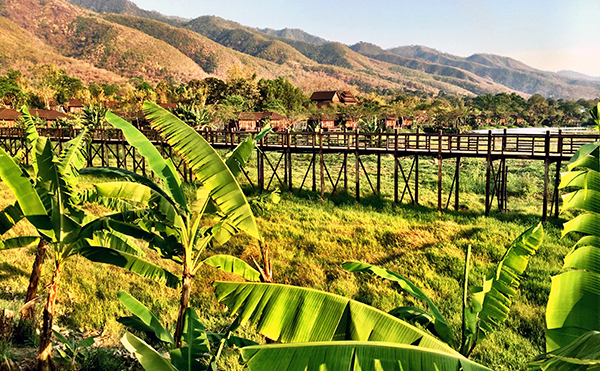 While I explore further, Raffles prances about like a nutjob under the Mosquito nets that are draped prettily from the ceiling over our beds. 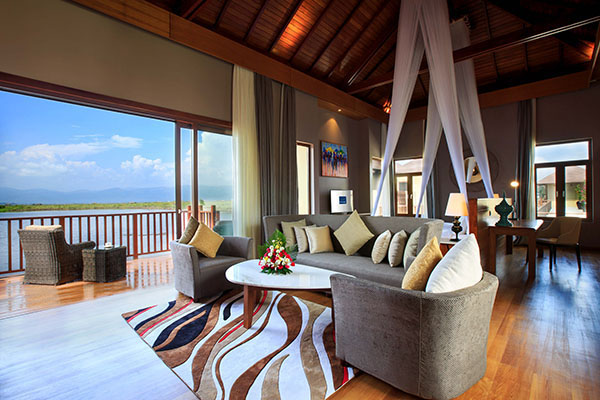 The bathroom is as big as our apartment, with a gorgeous freestanding bath that has my name all over it. 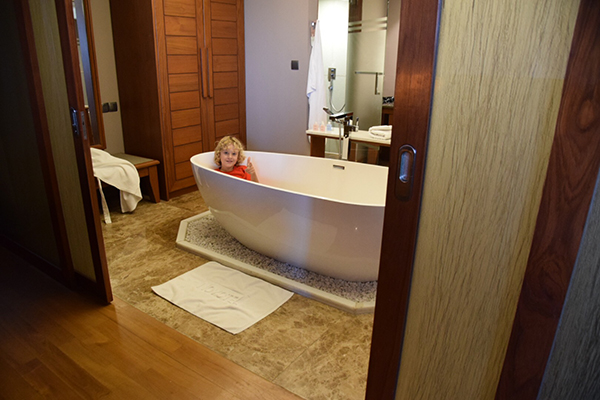 Though I’d be quite happy to settle in for the evening in our plush surrounds, we instead head off to explore the rest of Novotel Inle Lake Myat Min and discover there’s a convenient on-site spa and free bikes to explore the area, both of which I fully intend to take advantage of later in our stay. 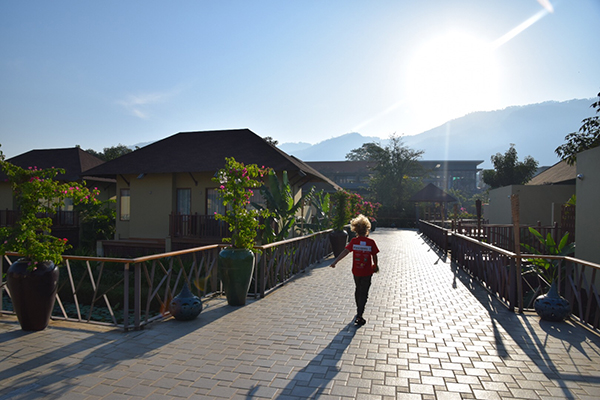 But for now we’re enjoying cocktails by the resort’s infinity pool. Well at least I am. Raffles is busy splashing about. I dangle my feet in the water as the sun drops and together we watch the Burmese sky turn to shimmering gold. 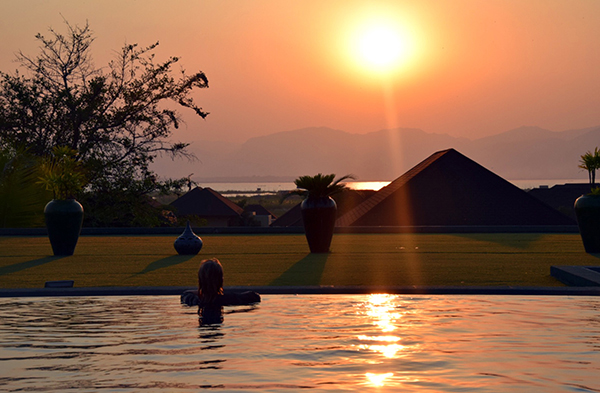 After filling up on a fantastic buffet dinner of Asian and international delicacies from the Novotel Inle Lake Myat Min’s restaurant, the clanging of cymbals announces the arrival of musicians, flamboyant costumed dancers and fire twirlers. 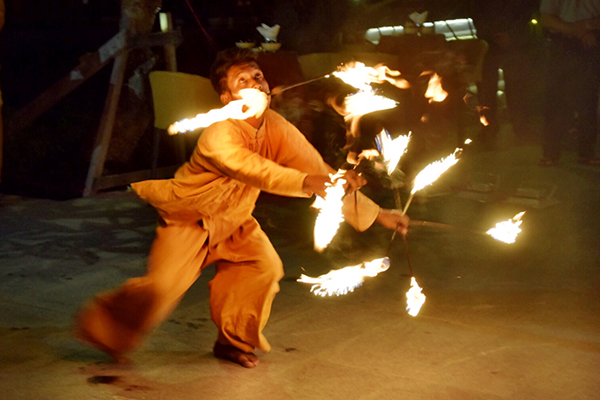 Then comes what can only be described as a life–sized yellow Muppet llama. While the shaggy creature intrigues Raffles, I make a mental note to slow down my alcohol intake, for surely I must be imagining it. 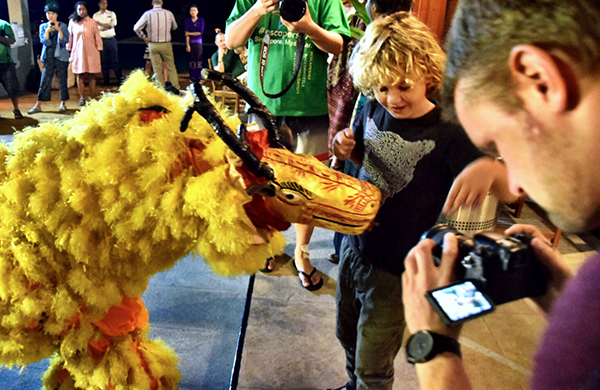 Before I take Raffles to bed, we head down to the jetty as the resort has one more surprise in store and, in a trip that has been filled with magical moments, this one proves one of its most beautiful. Together Raffles and I send a giant paper lantern full of wishes into the night sky, just as his father and I did ten years ago, to mark our wedding in Chiang Mai. 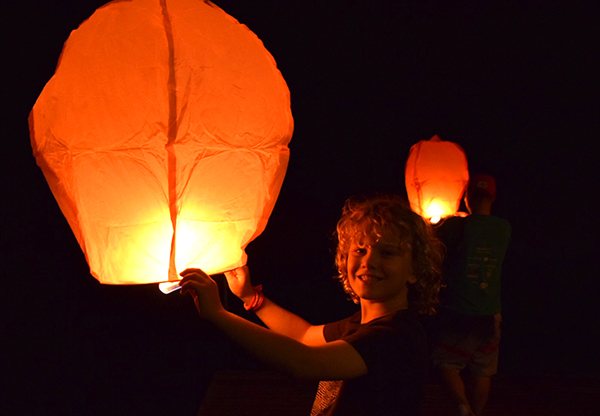 That’s right, by chance today marks my 10th wedding anniversary, and though I’m sad Mr Eats World and I are unable to celebrate together today (he is back home with Sugarpuff), it is a happy coincidence that I can repeat the ritual on this exact day, with Raffles as his dad’s proxy. We send a photo to Mr Eats World who sees it as beautifully serendipitous as I do. 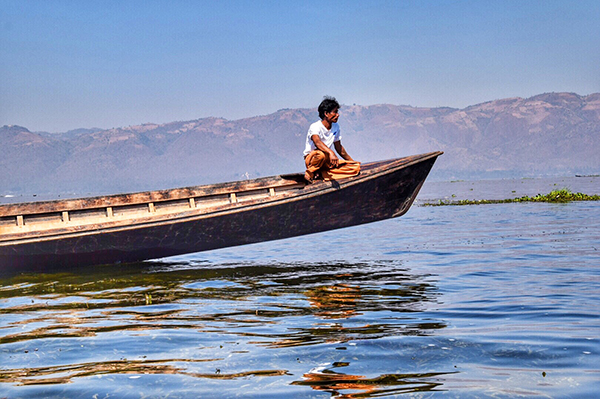 After an incredible breakfast we’re back in the boats and heading to the centre of the lake where we are invited to watch a re-enactment of Inle Lake Boat Festival’s famous rowing race where dozens of Intha in traditional Shan dress compete in huge teams. 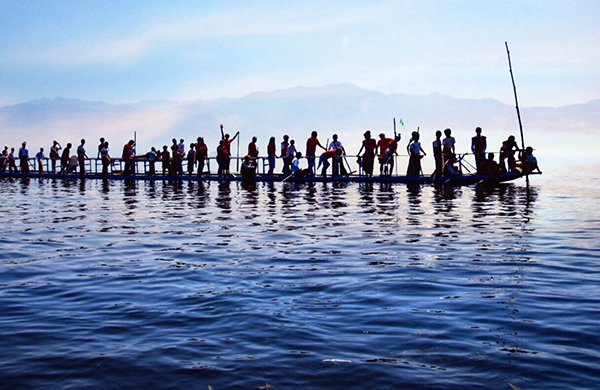 My boy racer is asked to join in – a privilege normally reserved only for Inle residents.

The twist, he too has to row with his feet. He races with as much heart as the rowers around him, his team winning by a nose. Another first for him to add to his collection of treasured travel memories. 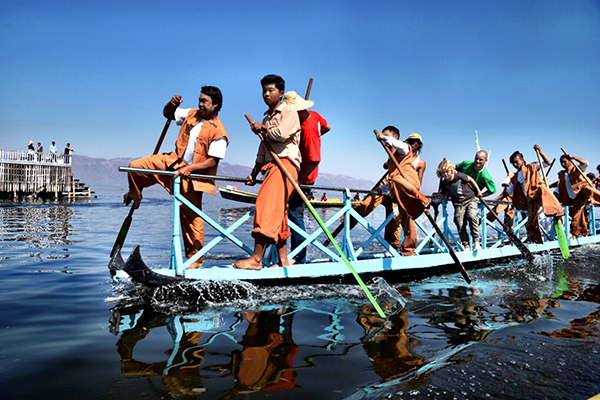 The Novotel Inle Lake Myat Min provides an ideal base for exploring the lake. 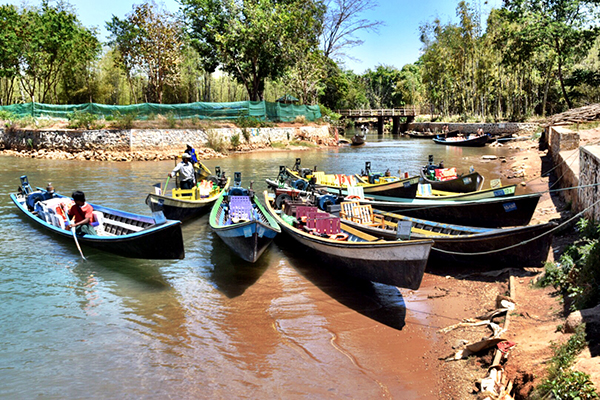 After our exciting morning of racing, winding canals lead us past stilted monasteries and into a handicraft village. 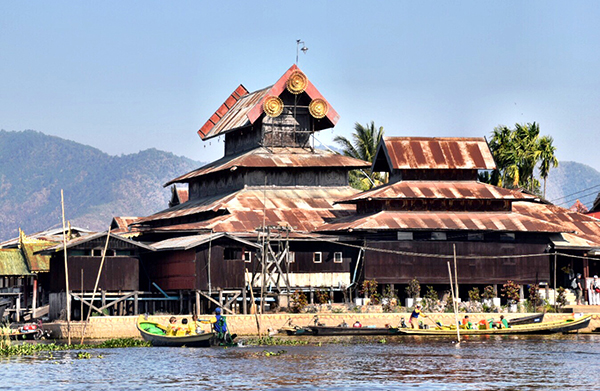 where we watch the fibres of the lotus plant being hand pulled and woven into silk scarves and shawls. 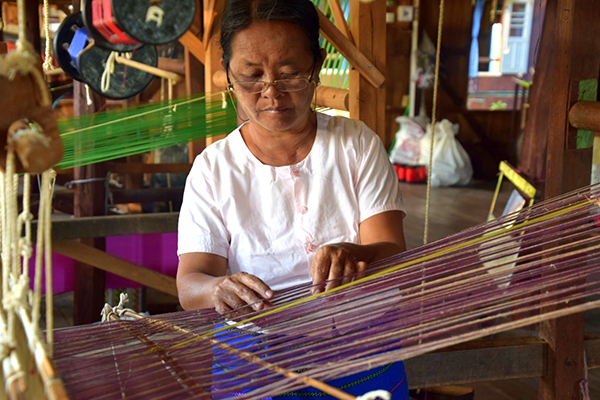 We see wood workers crafting boats, and watch blacksmiths forge swords using traditional techniques, Raffles getting in on the act with a mallet.

We potter down bamboo-dammed canals, a little nonplussed when we find ourselves in what can only be described as monk soup!  We’ve obviously interrupted bath time for scores of laughing young monks who are leaping about in the water, their waves and giggling cries of Mingalabar (hello) following us as we pass by. 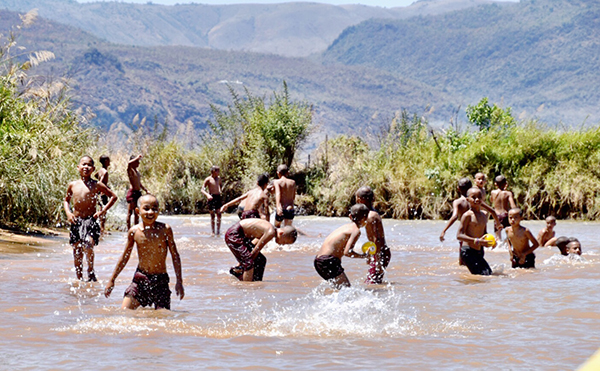 At In Dein, we explore the forest of stupa thats spreads across the low hill. 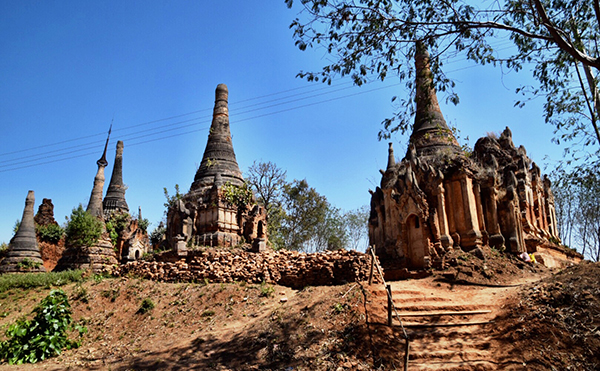 We stumble upon a temple restoration in progress. The dust catches the sun as locals labour to restore a vegetation-clad brick 12th century structure by hand, unveiling intricate carvings and giant images of the Buddha. 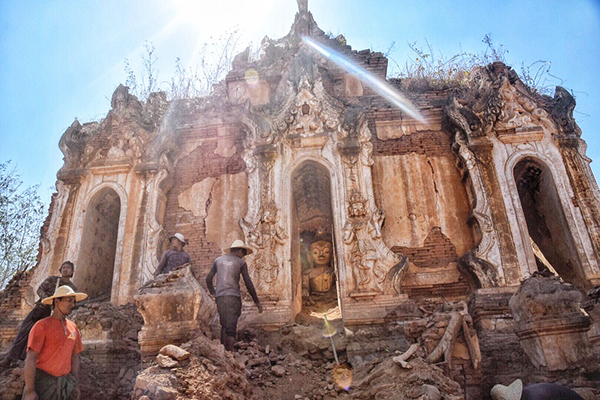 It is a once in a lifetime moment and launches Raffles into Indiana Jones mode. He leaps about the ruins like a ninja before settling before the fallen head of some ancient magical creature. This is why we travel. 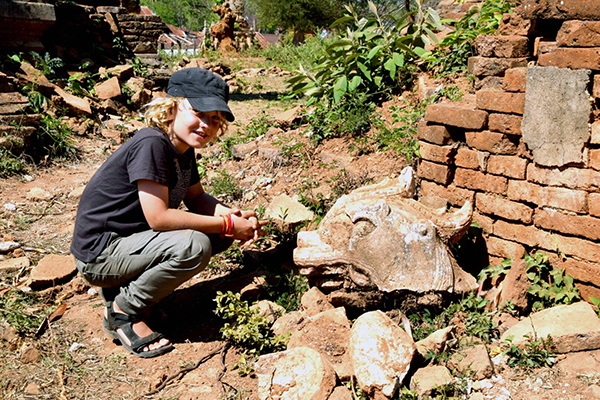 Two women walk by carrying massive bundles on their heads, and a translator tells us that the uncomplaining ladies are about to undertake a two-hour walk home with their heavy loads. Raffles is horrified and sweetly suggests we give them a lift, much to their amusement. 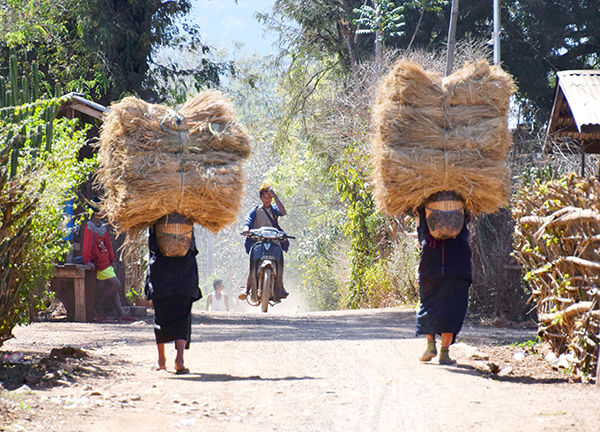 The ladies continue on their way, as do we, a little more in love with Myanmar and its people with every passing day.

Disclosure: While we had to work for it, competing in and completing challenges, Raffles & I were hosted by the fabulous folk at AccorHotels, Novotel Inle Lake Myat Min, Scoot Airlines, Tiger Air and Asia Holidays during the incredible Myanmar leg of our #escapers17 adventure. However, all opinions and foot rowing are our own.

Hi, I’m Aleney and I am not a boy, but the little dude next to me is! I’m a besotted mother, award-winning travel writer, magazine editor and gallivanting glutton. He’s Raffles, and all-singing, all-dancing, all-cooking, all-adventurous eco-warrior. Along with his intrepid sister, Sugarpuff, we’re exploring the world’s colour, culture and cuisine on a food safari junior style.