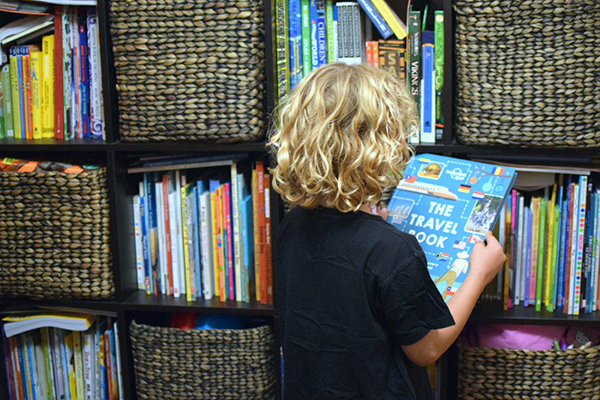 “You must lurk in libraries and climb the stacks like ladders to sniff books like perfumes and wear books like hats upon your crazy heads”, said one of my literary idols, Ray Bradbury. It’s a message both of the kids have taken to heart… especially the crazy bit.

It’s fairly obvious that we’ve passed on the gypsy gene on to both Raffles and Sugarpuff, but my tiny travellers have also inherited a bookworm gene. Both have embraced books, not only as a source of great entertainment, but as a great way to discover and learn about different places, faces and ideas. Which is rather handy given neither seem to have been blessed with a living-within-our-means gene and are unable to reconcile their parents dubious bank balance with their extravagant travel wish lists.

So to mentally scratch their ever-itchy feet and appease their appetite for other cultures we started our own special little library of cultural and travel tomes. Already packed full of stories of great adventure, exotic countries and Raffles’ favourite Lonely Planet’s Not-for-Parents Travel Guides – an awesome travel series written for kids and packed with intriguing stories and quirky facts – we’ve recently added three new books to the collection. Only these ones are appeasing the curiosity and fuelling the imagination of our littlest explorer-in-training, Sugarpuff. 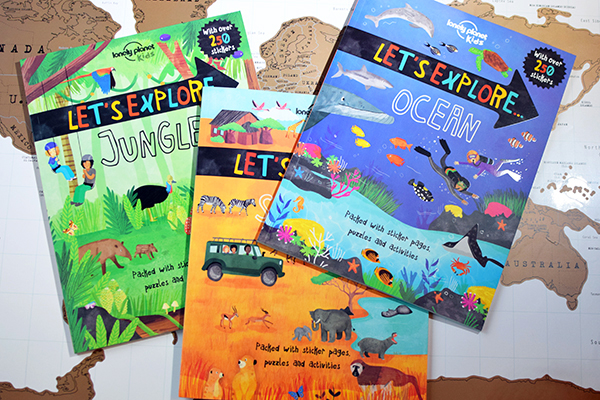 In Lonely Planet Kids Let’s Explore… series, gadget guru Amelia and map loving Marco journey deep into the jungles, embark on an incredible safari and explore what lies beneath the ocean surface to show kids just how truly amazing our planet is.

Ideal for children aged five and up, and perfect for on-the-road entertainment, the series takes little explorers around the world with striking illustrations, fascinating facts, fun activities and more than 250 bright and colourful stickers. And my tiniest traveller has been so enraptured with the series she has spent hours happily colouring, curating colourful wildlife scenes and solving the fun puzzles. 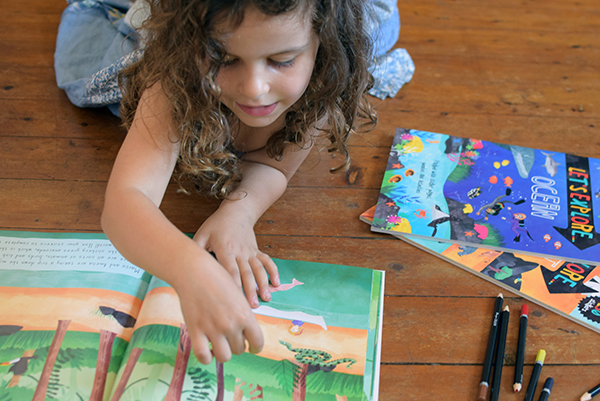 BoyEatsWorld has a fantastic Let’s Explore Book Pack, valued at $38.97, to giveaway to one lucky little traveller.

The pack contains a copy of each title in the Lonely Planet Kids Let’s Explore series; (Let’s Explore…Jungle, Let’s Explore…Ocean and Let’s Explore…Safari). For your chance to win simply leave a comment telling us where in the world your little adventurers would most like to explore and why.

Giveaway Terms & Conditions: This competition is open to Australian residents only. Prize includes one Lonely Planet Kids Let’s Explore Book Series Pack which includes a copy of Let’s Explore…Jungle, Let’s Explore…Ocean and Let’s Explore…Safari. Total Prize pool valued at AU$38.97. Prizes are not redeemable for cash and are non-transferable. Giveaway opens on Tuesday 15th March 2016 at 7am and closes on Friday 18th March 2016 at 8pm, AEST. The winners will be announced on the blog and contacted by email on Saturday 19th March 2016 , please leave a valid email address. This is a game of skill, not chance. The winner will be selected on the basis of creativity and originality. The judge’s decision will be final, and no correspondence will be entered into. Boy Eats World takes no responsibility for prizes lost in transit.

COMPETITION CLOSED: Congratulations to Karin for winning the prize pack.

Linking up with literary lovely Essentially Jess for #IBOT