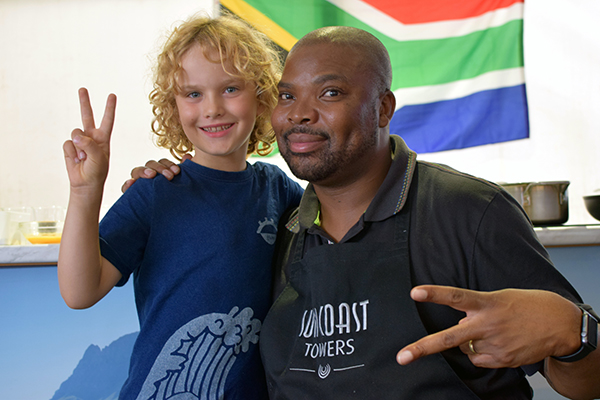 It is not every day a small boy gets to do a cooking masterclass with an in demand Masterchef judge. So when South African culinary superstar Benny Masekwameng, here to share the colour and flair of his country’s cuisine at Taste of Sydney, got his lamb chop on, there was no stopping Raffles.

You’ve come all the way South Africa, right? Can you tell me what it’s like where you live?
Yes, South Africa is a great country. It’s the same, in a way, as Australia in the type of things we do. We have a lot of high-rise cities with highways and airports but the natural vegetation and animals we have are exciting… giraffes, elephants and lions. You can see them roaming around the countryside. You must come one day.
I’d love to!

You have the most epic wildlife. They would have our koalas on toast. Have you ever been on a Safari?
Yes, as a kid and again recently. It’s great that we have so many places to go on safari throughout the country with so many different animals, birds, plants and trees to see.
I really, really want to do a safari one day.

What do you think are the best things for visitors to see and do in South Africa?
There’s so much to see. We’ve got cities with beautiful coastlines and also a lot of game parks. Cape Town is situated at a point where two oceans, The Atlantic and Indian, meet and you can see the end and start of each of them. There’s also Table Mountain, a range of mountains with a flat top, which is very iconic. Our capital city, Johannesburg, is vibrant, more like New York when you think about it. It’s also closer to a lot of the game parks where you can go on safari and see the Big 5 (the lion, elephant, leopard, Cape buffalo and white or black rhinoceros) – as well as other animals. But wherever they go they will find that the people of South Africa love hosting other people. They are warm people. They love music and dancing. It’s a really cool place to go.
I love music!
It’s easy to connect with somebody through music.

How would you describe South African cuisine?
I would describe it as vibrant. It’s full of flavour and very colourful. We have so many diverse influences from the Dutch, Portuguese, Malay and Indian people living in South Africa. They have introduced food from their countries and we have used all these influences to come up with something that’s unique to South Africa. It’s exciting, it’s flavourful and the dishes we produce tell a story about the country. It’s a really enjoyable kind of cuisine.
That sounds awesome to me. I like a lot of flavour.

My mum is going to Johannesburg and Cape Town for work later this year. I’m VERY annoyed that she’s not taking me with her because I really, really want to go… but what are some of the unique local dishes that you think she should try while she’s there?
There are a whole lot of restaurants and many different dishes. A lot of our wine – the best in the world – comes from the wine regions around Cape Town. But she must try Bunny Chow, it’s a curry served in a hollowed-out loaf of bread. Whatever she eats, once she tastes South African food I’m sure she’ll try and learn a couple of dishes to cook with you. And I will show you a dish using lamb, spinach and mealie pap (maize porridge), which is a South African ingredient (like polenta).
Awesome. 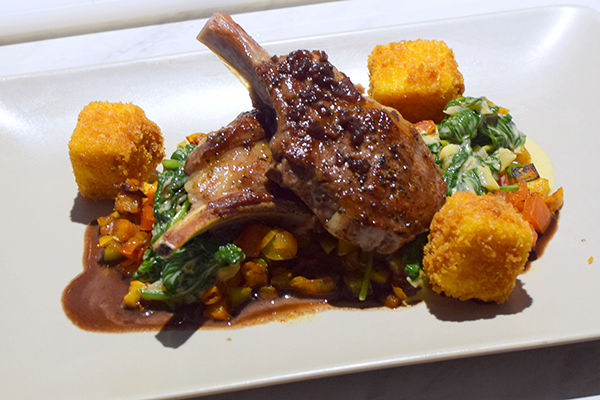 You’re the executive chef of Tsogo Sun Resorts, have created new menus for South Africa Airways and are a judge on MasterChef.  What made you get into cooking in the first place?
My love for food came from working closely with my mum, like you do. I saw how she enjoyed making people happy through her cooking and you know, I wanted to be the same as her. So I stuck with her and learned so much. Eventually I went to study catering management and because of the love I had for the food I grew quickly in the industry and a lot of people got to know about me. My enthusiasm and interest helped me get to the position that I am in now, being a judge on Masterchef and travelling the world. I am still learning a whole lot of new things when it comes to cooking but sharing my story and what I can do with other people is fun.

Do you cook with your daughter?
She’s only four but she already started to show interest in the kitchen. She loves being around me so I think she’s going to a pick up a few things and maybe even take it a notch further.

If someone gave you $1000 to eat one meal in South Africa where would you go?
I would go to a restaurant called La Colombe in Constantia, Cape Town. They do really wonderful dishes. I’ve been there three times and enjoyed it very much. You should tell your mum to try it when she’s in Cape Town.
Hmm. Not without me, she shouldn’t.

If you only had $10 left to eat a meal in South Africa where would you go?
If you go to a taxi rank in Downtown Johannesburg you’ll get so much food that you won’t believe that you are only paying a few dollars. $10 in South African currency is quite a bit so you could get a meal for three people. That is a great way of experience the kind of local food you can find in Johannesburg.
I love street food so that sounds really cool.

Thanks for your time Benny.
Thank you man.

See you in South Africa soon. I hope.