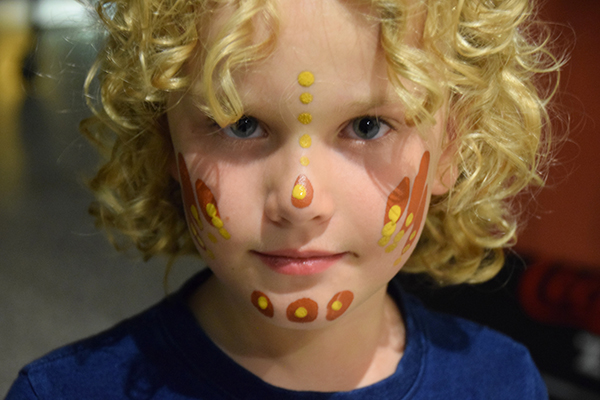 Given their mother’s rampant “bleeding heart hippie” tendencies and outspoken belief in the need for an egalitarian society, there was never a chance our kids would grow up without at least a little respect and recognition of Australia’s First Nations people.

But Raffles has surprised me with his passion for Indigenous culture. We’re more than happy to indulge his cultural quest for knowledge and, wherever possible on our travels around Australia, expose him and ourselves to the local Indigenous traditions.

Through immersion, he is learning the stuff of this country’s history in a way that can’t be acquired in a classroom. He has seen incredible artefacts and symbolic artworks and listened intently to beautiful stories. He has embraced indigenous culture through his belly. He’s learned how to make tools from nature and explored the bush with traditional teachers who have happily passed on their almost scientific knowledge of plants. And along the way, he has learned incredible lessons of equality and respect, which I hope he will carry with him for the rest of his life.

It turns out that in Cairns, opportunities abound to explore the past, present and future of Indigenous Australia. Needless to say, Raffles is as keen to get in touch with the local Aboriginal culture as he is to loll about in our hotel pool or leap over crocs.

When we explain to the wonderful staff at the Holiday Inn Cairns Harbourside what Raffles is seeking, they tell us about each of the many indigenous experiences open to a small curious boy and make enquiries for us about last minute availabilities. While he is tempted by both a Ngadiku Dreamtime Walk through pretty Mossman Gorge and joining the Kubirri Warra brothers of Kuku Yalanji Cultural Habitat Tours for a mudflat and mangrove walk, the time and distance are prohibitive on this short stay, and will need to wait until our next visit.

Instead he chooses to immerse himself into the world’s oldest living culture in the dark of night at Tjapukai, a cultural centre just 20 minutes from the hotel. Lover of all things theatrical that he is, Raffles is extremely excited at the prospect of dinner and a show but I must confess that I don’t share his enthusiasm. With all its advertised razzle and dazzle, I can’t help but suspect Tjapukai Nightfire will be lacking a certain authenticity. I am happy to be proved wrong!

Tjapukai Aboriginal Cultural Park, the largest employer of indigenous Australians of any tourism enterprise in the country, prides itself on authenticity. And though I’m fairly certain greeting guests with trays of sparkling wine and juice is not an ancient skill passed on by the elders, or remotely authentic, the stories they share are. And it is fun.

The kids are both chuffed on as their faces are ceremoniously daubed in colours to link them to traditional lands. 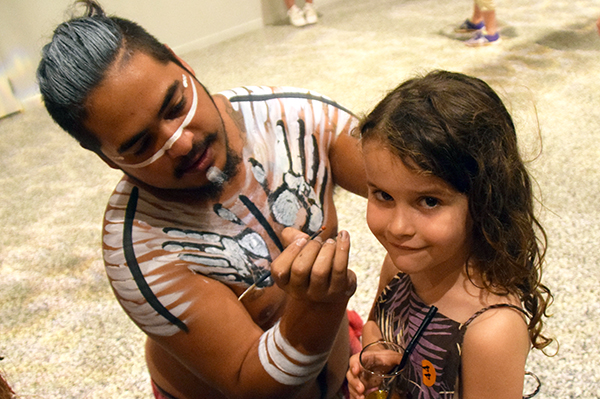 Mr Eats World and I manage to sneak in a couple of moorish slow-cooked emu canapés and then we too are on the receiving end of the paintbrush while our peckish, ochre-smeared son heads off to stalk the waiters… with serious intent.

The deep growls and rumbles of a didgeridoo sounds as the Bama people, the traditional custodians of the land we are on, officially welcome us and the Dreamtime legends begin to unfold.

Raffles is entranced. He devotedly follows his Indigenous Pied Pipers across a bridge to the rainforest theatre for more stories and to watch the Tjapukai dancers perform. 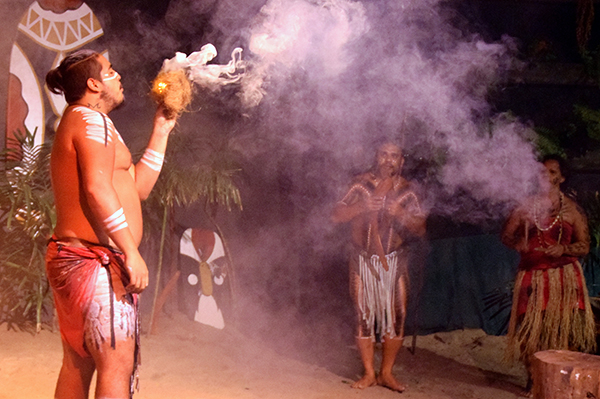 In no time Raffles is on stage with them, clapping, dancing, whooping and generally carrying on. It was always going to happen. He is rewarded for his fine efforts with a message stone painted with an intricate sting ray totem (a symbol of stealth and power in Aboriginal society that will safeguard him against evil spirits and offer him good luck). 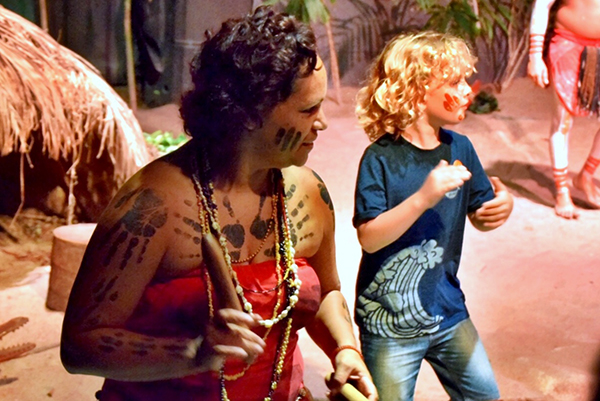 Ironically, it is the performers who are going to need a little luck in getting our enthusiastic wee show pony off the stage.

After the show, we’re led along a fire lit path to a clearing where we’re all handed Aboriginal clapping sticks. And then we too join the performers clapping, stomping and chanting as they have us form what they call a ‘Rainbow Serpent Circle’ around a fire pit. 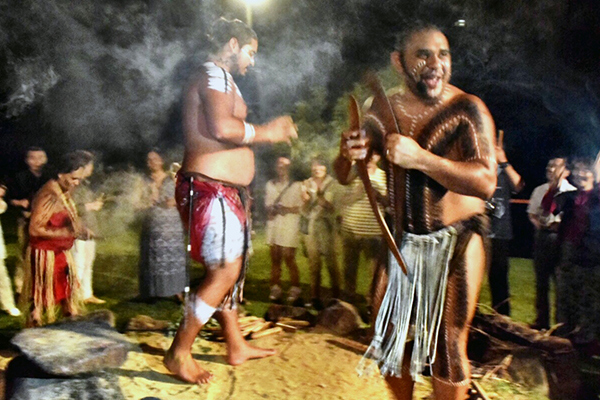 The didgeridoo continues to share its haunting stories as the performers light a ceremonial fire… sans matchsticks.

The mesmerising hum of the music has the crowd in a happy trance and while Sugarpuff is focuses intently on working her clapping stick magic, Raffles is drunk on the atmosphere and leaping about with unrestrained joy to the beat. 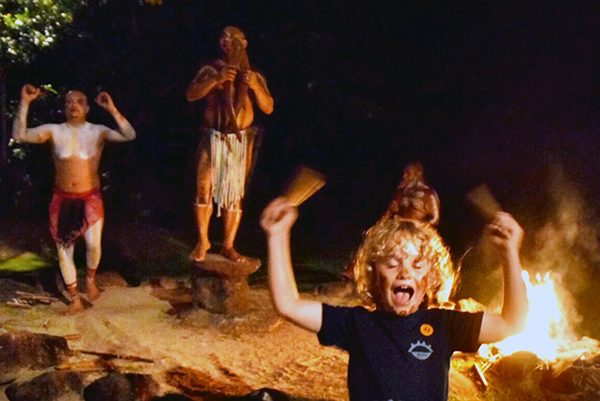 That is until a spectacular fireball shoots towards the stars and leaves him, and all of us, momentarily started and still. The shock and awe doesn’t last and he’s soon back dancing to the beat of his own inner drum. 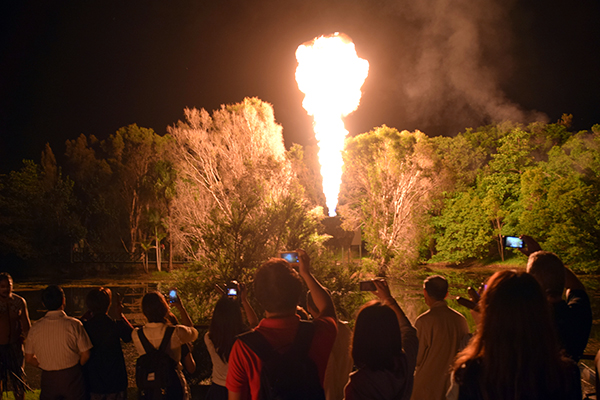 On a high from the performance, we once again find ourselves following our hosts along the cultural park’s fire lit bridges to the Flame Tree Bar & Grill for dinner and Raffles second performance for the evening – his best impression of Monty Python’s gluttonous Mr Creosote.

He piles his plate high with fresh local prawns, mussels with finger lime, native spiced salads, baked local fish and slivers of kangaroo. Rapturously trying all the new and intriguing flavours on offer, Raffles is in his happy place. 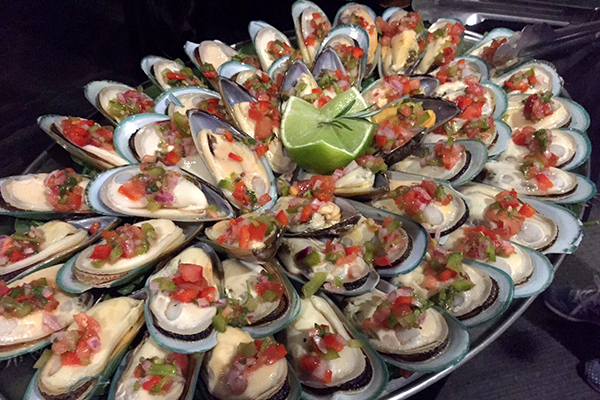 Thankfully there is no wafer-thin mint on the dessert table and he passes on exploding, instead heading off to digest his mighty meal over a chat around the fire with his new buddies, the Tjapukai Nightfire warriors. 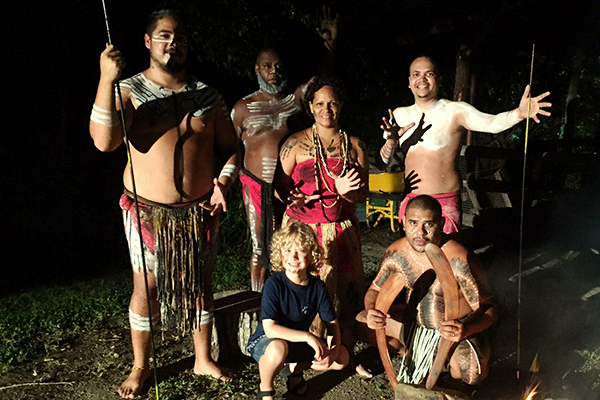 For my little idealist, it proves the perfect ending to what has been a magical night.

NOTE: Tjapukai was permanently closed as of January  2021

Disclosure:  While The Eats Worlds were guests of Holiday Inn Cairns Harbourside, our visit to Tjapukai Nightfire was independently paid for.