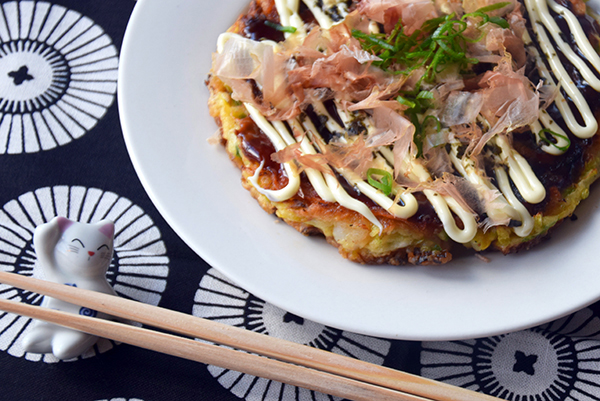 It’s most iconic structure may be a 16th-century shogunate castle that sets Raffles samurai senses tingling, but Osaka is probably better known for its high tech architecture, street eats and many, many stars… Michelin stars, that is.

Japan’s undisputed gastronomic capital, it is said that the people of Osaka spend more money on food than on anything else. In fact, the city is often referred to as Kuidaore which, roughly translated, means to “to ruin oneself with food.”

Ironically, given its extraordinary culinary culture, it is not cuisine but magic that has brought the Eats Worlds to Osaka. We’re here to unleash our wee muggles on Hogwarts. Well, at least the Wizarding World of Harry Potter at Universal Studios. But given that this is us, we have allowed time to see what other excitement can be conjured in Osaka in 24 hours, plus a whole extra day for alchemy of the culinary kind.

But before the eating can commence we need to check in to our hotel. The Intercontinental Osaka is the place to stay for hungry visiting Muggles, conveniently located just a couple of minutes walk from the cavernous JR Osaka Station in the new Grand Front Osaka food and entertainment complex and everything we want to see do and reach is an easy train ride away.

Related: How to get the best from  your JR Rail pass here. 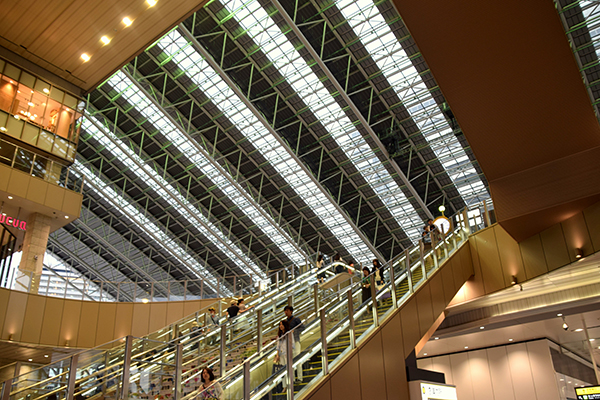 Osaka’s newest five-star hotel, the lobby is a sassy space of wood and stone dotted with funky modern art that somehow conjures the feeling of both modern and ancient Japan. 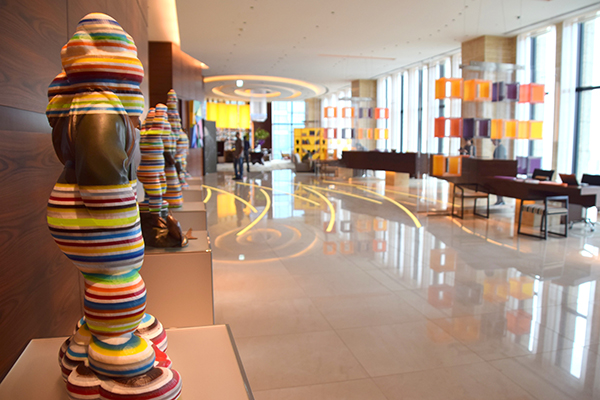 As we exit the elevators a quirky rainbow striped Japanese god points us in the direction of the lobby’s cosy Lounge 3-60 where a chocolate buffet beckons decorously. Do we eat or do we get our room key? 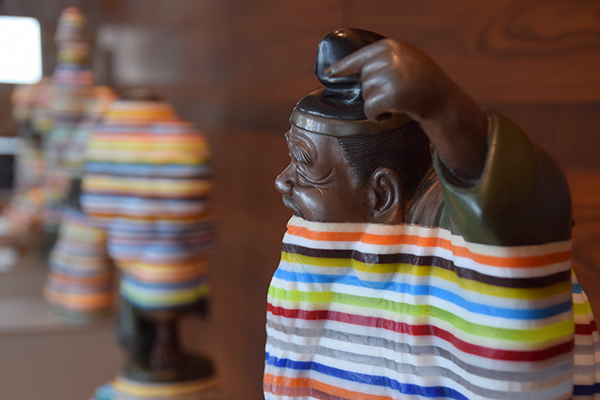 I mean, we haven’t even made it to our room and we’re already smitten with this hotel. 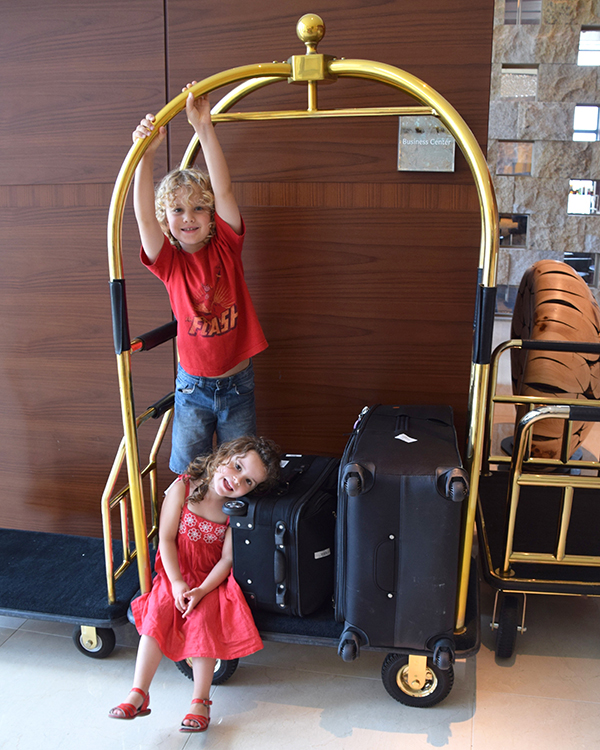 Our luxe two-bedroom serviced residence with enchanting views over Osaka only deepens our infatuation. It’s the perfect size for our little family with a lush living area, two bathrooms and full kitchen complete with its own washing machine… something that proves enormously handy given the state of our travel-stained offspring. 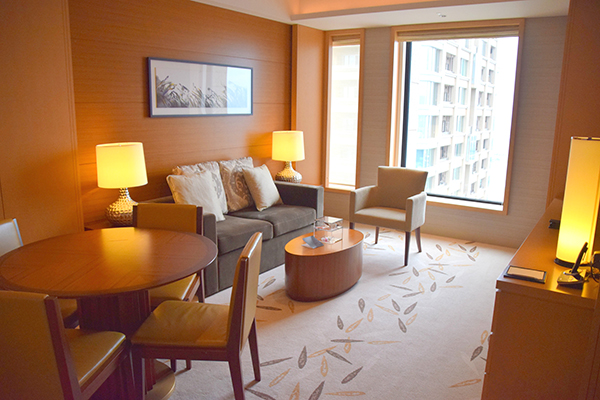 Special touches like kid-sized slippers and traditional Yukata robes means our mini-me’s can lounge with us in Japanese style while inhaling the platter of sweet treats that have been left to greet us. 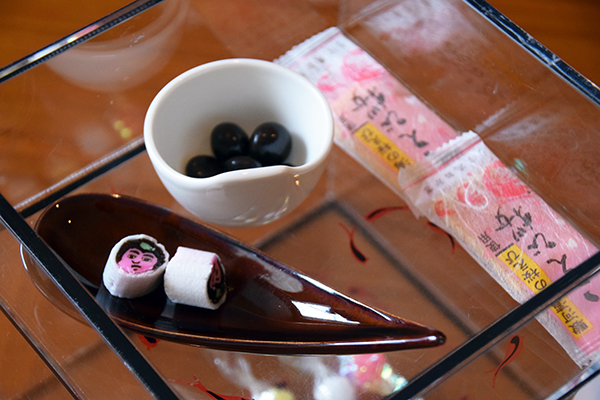 We do a lap of the hotel and the kids are soon under the spell of the massive indoor pool and traditional Japanese baths, while I’m rather taken with the sprawling spa area. Or at least I would be if I were allowed to take advantage of it!

Sadly for my weary muscles, they shall remain unmassaged as the kids are on a vital pre-dinner mission to ride the retina-searing wave of fluorescent yellow to Osaka’s Pokemon Center that they spotted while hopping off the train. 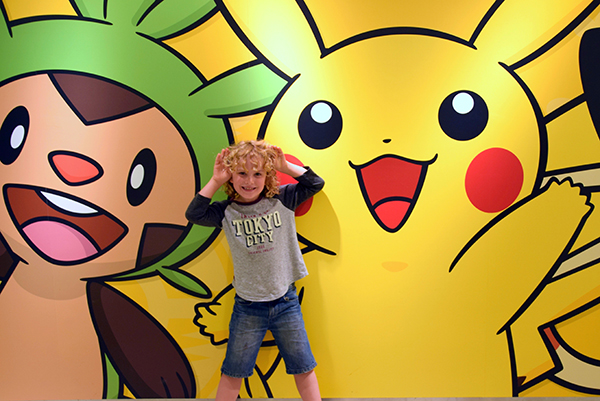 Surrounded by Pikachu and his freaky friends, the kids stock up on dangly green dragons and cuddly whatever-the-hell-they-ares while I don my sunnies to avoid permanent ocular damage. 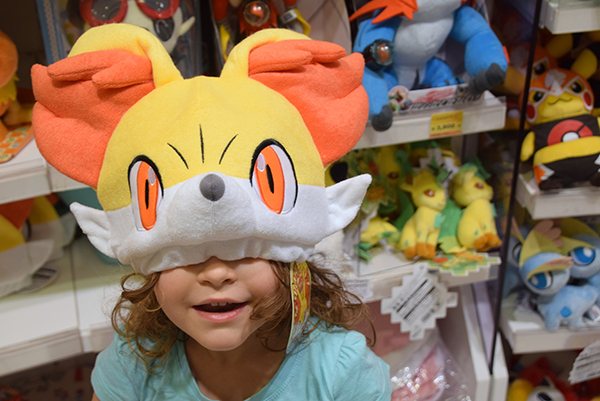 At this point Sugarpuff decides to invest in what are quite possibly the most hideous socks I’ve ever encountered. Then demands to pair their bright yellow ugliness with her dodgy old red sandals. Right. Now. 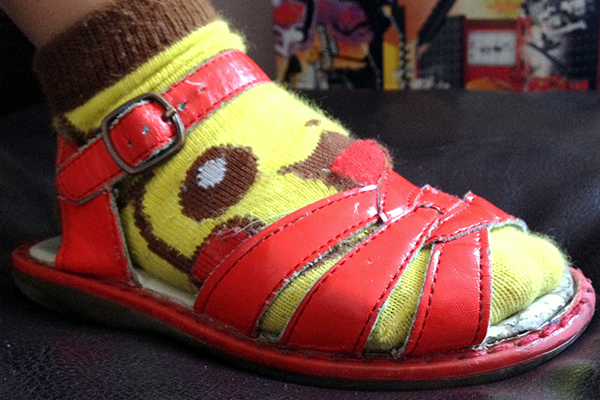 We’re saved from Planet Pokemon by rumbling bellies. While we’re tempted by the InterContinental’s Michelin-starred Pierre – an elegant space where French cooking techniques are fused with Japanese ingredients to spectacular effect – Sugarpuff’s repugnant sock and sandal combo seem to suggest that, on this occasion, Michelin-starred dining is not for us.

Instead we head to the famous foodie district of Dontunburi where we immediately get lost, something we now have down to a fine art. We stare gormlessly at a map until, as if by magic, two lovely direction elves (obviously on leave from Hogwarts) materialise out of thin air. Instead of merely pointing us in the right direction, the gorgeous girls lead us several blocks out of their way and deposit us in the centre of Dontonburi Street before disappearing in a puff of smoke! Ok there was no smoke and they just walked off into the crowd. And while this doesn’t have the same dramatic effect, it does serve to illustrate that Japanese people are incredibly freaking nice. 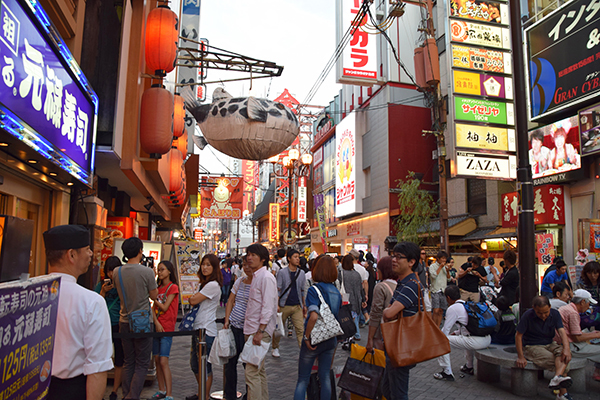 While it’s no Diagon Alley, there’s wizardry of a different kind in Dotunburi Street! We dodge the tentacled embrace of a giant pink octopus, gaze with suspicion on a giant glowing fugu fish and swoon at the site of an enormous flashing gyoza. We come to a stop in the shadows of the mechanised legs of a gaudy 6-metre wide crab and take in the literally hundreds of eateries that line the neon-lit street. 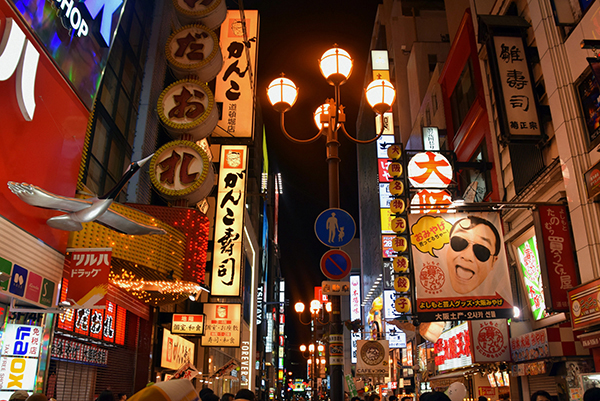 With so many Osakan specialties to choose from and so many winking and blinking oddities beckoning for our custom we don’t know where to go, so decide that a food crawl is the only way forward.

We begin in the belly of the beast… at least at the Takoyaki restaurant that sits under the dangling extremities of the cerise cephalopod. 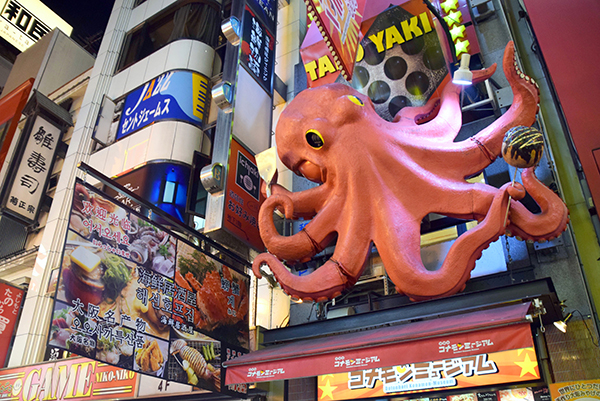 The dangerously addictive balls of flour, eggs and dashi are studded with octopus pieces. Crisp on the outside and creamy on the inside the takoyaki are topped with sauces and dancing bonito flakes. And they are supernaturally good! 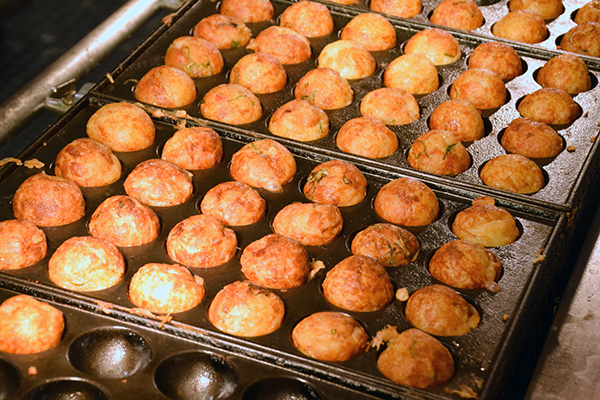 A dozen golden balls later (ok, three dozen) we move on to kushikatsu, which is essentially stuff on a stick. Delicious wands of deep-fried stuff covered in crispy panko crumb, which bewitch our tastebuds. 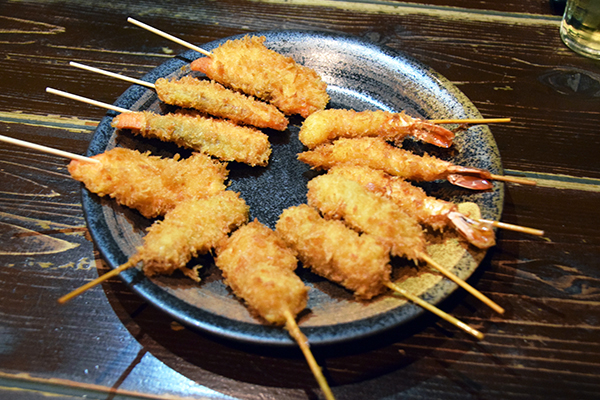 At Sugarpuff’s insistence there’s a quick pit stop for a six-pack of gyoza before it is time for us to take on the city’s most famous dish, okonomiyaki, a thick savoury pancake. The ultimate in Osakan soul food, okonomiyaki means “what you like, cooked” with the mainstay of the thick beasties a pile of shredded cabbage flavoured with the meat and/or seafood of your choice.

We go for the traditional pork belly and shrimp topped with bonito flakes, sweet and tangy otofuku sauce and kewpie mayonnaise. They are so magically delicious that Hogwarts is going to need to conjure up something special indeed to compete with the awesome alchemy of Osaka’s Streets Food.

So bewitching are the savoury pancakes that I ask the sorcerer in the kitchen to share his secret. To my surprise he reveals all. There are a few elements of his magical okonomiyaki potion that got lost in translation so I’ve taken a little liberty here and there but these babies have been on high rotation at Casa Eats World since… and they’re almost as good as the originals. 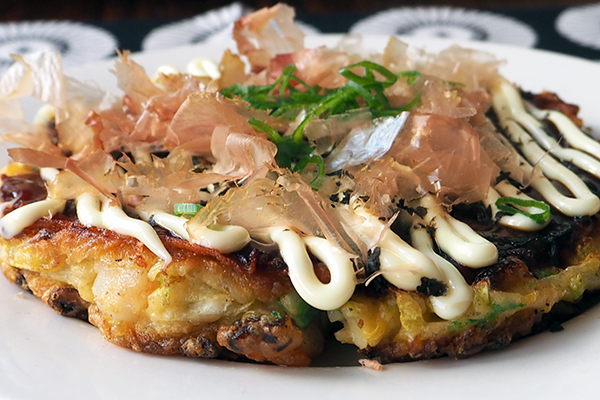 Method:
1. In a large bowl mix flour, water and dashi stock.
2. Add cabbage, spring onions and prawns and mix well.
3. Add the egg and combine all ingredients.
4. Heat a non stick frypan to a medium-low heat
5. Coat the surface with a little sesame oil.
6. Spoon the cabbage batter mix into the frypan, to make a circle about 15 cm across and 2 cm thick.
7. Place sliced pork belly slices across the top.
8. Cook over med-low heat for about 5 minutes.
9. Flip pancake and cook another 3-4 minutes.
10. Flip again so pork belly is facing up and cook for a further minute.
11. Serve pork side up topped with Otofuku, mayonnaise, powdered seaweed and bonito flakes.

Note: You can buy Okonomyiki flour at Asian Grocery stores which could replace the batter in our recipe.

31 Comments on Under the spell of Osaka and Okonomiyaki