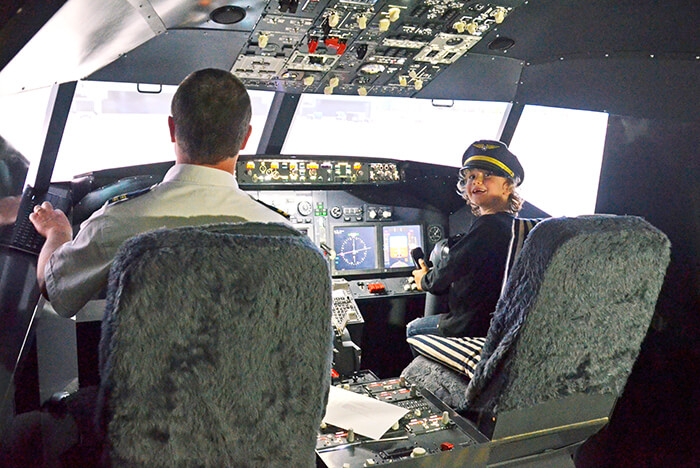 “We’re going down” screams Raff as he struggles to level the Boeing 737-800NG he is trying to wrestle into Canberra Airport. Our descent is way too fast and he loses control, missing the runway and hurtling us towards the terminal at high speed.

Have I mentioned before how much I hate flying? Well, that was even before I had a child piloting the plane. He tells me not to worry as he cranes his neck to see over the controls through the cockpit window and then yanks at the reverse thrust. Of course, I ignore his advice and start to panic. But as promised my boy is pretty fly for a little guy and he saves the day, bringing us to a stop just inches from the building and our doom.

Well he would have had he actually been flying instead of in the 737-simulation cockpit at Jet Flight Simulator Canberra under the instruction of an actual pilot. And though my mini Maverick did overshoot the runway during his hurl-inducing landing it was, in fairness, only after navigating us out of Tokyo Airport without any major mishaps. Not that I’m suggesting he should sign up to pilot an actual jet plane any time soon. 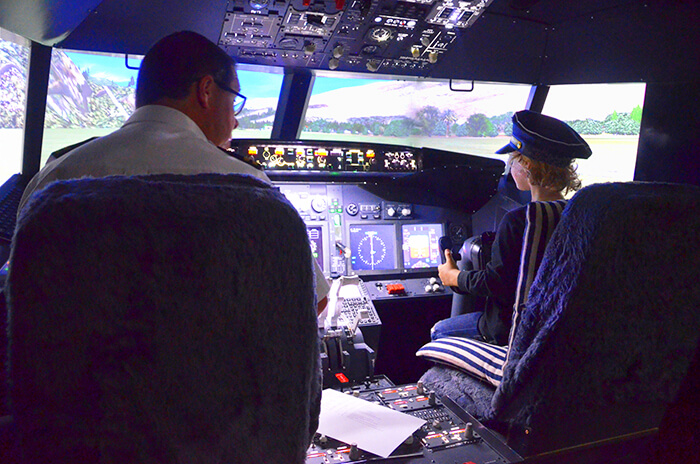 Once of the most unique and exciting things to do in Canberra with kids, Jet Flight Simulator Canberra, allows wannabe pilots aged six and over to take control of the most popular commercial plane in the world.  Loved by little ones right though to commercial pilots in training, the flight experience involves a thorough pre-flight briefing of standard safety and flying procedures by qualified pilots trained for simulator instruction before hitting the cockpit accompanied by up to three passengers. Then it’s time to take to the virtual skies from your choice of 22,000 airports and all kinds of weather conditions for a thrilling 30 to 120-minute flight.

If you want to delve even further into the world of virtual flight, Jet Flight Simulator Canberra also offers the opportunity to strap in to a VR flight experience with ICAROS, an active VR machine that fuses health-science and gaming technology to enable you to fly, dive and drive from the tip of the Swiss Alps to worlds beneath the waves as you work out your body.

And experiencing Jet Flight Simulator Canberra with kids has been so much fun that even this bona fide flight phobic is desperate to get back to do it all it all over again.