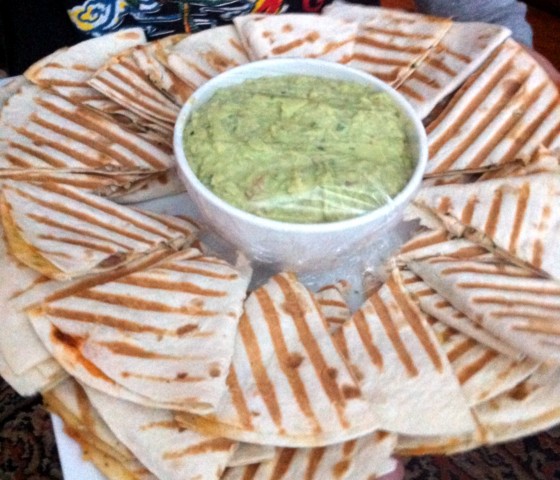 “Mama, mama! Why aren’t you awake?” What an excellent question, son. Let me see, perhaps it is because it’s not even 5am yet! I roll over and groan something unintelligible, and quite probably obscene, to my beloved firstborn.

“GET. UP. MAMA! You need to make Quesidillas. Now!”

Of course I do. What else would I be doing this fine morning, darling child? I mean,  it’s not like sleeping is on the cards. In fact, slumber seems such a self-indulgent and frankly mundane alternative to slaving way in a kitchen pre dawn. Actually, while I’m there why don’t I toss together a quick soufflé? Or perhaps sir would prefer a nice medium-rare sirloin?

Sadly, especially given my fondness for it, sarcasm is wasted on a pre-schooler. And patience unheard of.

Ergo, I find myself being dragged from the warmth of my cosy doona and marched into the kitchen by my tiny tyrant.

The reason behind this early morning menu madness is that my son’s pre-school is hosting a multicultural food week to celebrate and share the cultural backgrounds of its students. To assist in the festivities, parents have been asked to contribute a dish from their families’ culture, along with an explanation of how, where and why it is eaten.  As a parent I’m all about the importance of teaching unity and diversity so this is something that I, of course, think is fabulous.

But! And there’s always one of those, isn’t there?  My family background (besides a long lost Grecian and a token Kiwi here and there) is Australian as far back as the convict ships and a loaf of stolen bread is probably not of high appeal to either the school or the tiny tummies waiting to be fed. Mr. Eats World, on the other hand, is a five millionth generation Englishman who virtually has chips and battered spam in his DNA. Needless to say I felt we had little to contribute to this multi-cultural cuisine off.

Raffles, who was terribly excited by the prospect of contributing to the festivities, had other ideas.  A boy who clearly leans towards the exotic in his food preferences, he agreed that British or Aussie cuisine was off the menu. Unbeknownst to me, he took it upon his small self to take a straw poll of his pre-school friends on what country they’d like him to bring a plate from. He then dutifully informed his teachers that I’d assented to this. It would however appear that our “agreement” was by osmosis, as telling me was an afterthought, and then only after an off the cuff comment by his teacher the night before said plate was due to be eaten.

So that is how, for the purpose of this exercise at least, our family has come to be Mexican and the reason I find myself in the kitchen before sunrise being hurried along by a diminutive dictator as I whip together a swimming pool size tub of guacamole and thirty chicken quesadillas to go. THIRTY.  And he is counting. Ay, caramba!

Kiddie catering duties complete and both children breakfasted, clothed and generally organised we head to pre-school with our offerings where my precious offspring proudly announces, “I made Quesidillas! They’re from Mexico. I’ve never ever been to Mexico. But that’s my mum’s fault!”

Motherhood is so rewarding.