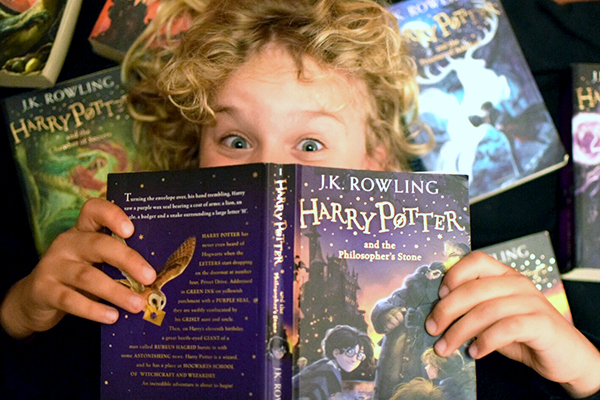 To suggest Raff is a bookworm is somewhat of an understatement; seriously, the kid devours books with the same enthusiasm he devotes to devouring food and traipsing around the globe. And this love of words fills me with delight.

Though he’s as happy reading a biography, travel guide or a cookbook as he is reading a novel, no book or books have earned his devotion quite the way the Harry Potter series has, and no author his admiration the way J.K. Rowling, who he idolises, has.  So much so he’s twisted our arms into taking him all the way to Edinburgh next month to see where his literary idol created Harry’s magical world.

The Harry Potter series fuelled Raff’s love of reading, his wild imagination, and his own desire to write. We introduced him to the first book at the age of eight, and he’d completed the entire series in around six months, cheekily sneaking off to the school library to read the final two books, as I had nixed them, worried that he was a bit young for the more mature adventures of Harry.

Now, at the ripe old age of nine, he decided it was time to reread the entire series, which he knocked over in a fortnight. But this time each book led to fabulous family discussions on a few of my favourite pet topics; tolerance, inclusion and equality, and how the books were so much more than just another good versus evil tale.

But still, I worried that some of the themes might be going over his little head.

That is until he spent a weekend writing a speech for this year’s NSW public schools Multicultural Perspectives Public Speaking Competition. I’m incredibly proud to say he was the Year 3-4 State Champion of this competition last year, not because he won, but because he chose to use it as a platform to share what he had learned from our travels to fight for the fair treatment of refugees and to speak out against unethical animal tourism. The trophy, well, that was just a bonus.

With a couple of other speaking projects in progress,  Raff made the decision that beyond delivering the necessary speech in class this year, he would step down from competing in the competition. Instead he has chosen to offer his services as a speech mentor to give, he says, another boy or girl from his school “the opportunity to shine” (and to get out of practising methinks). And because of this, I didn’t expect him to put a great deal of effort into it.

Once again, I am guilty of seriously underestimating my boy. He spent an entire weekend busily scribbling ideas on bits of paper, reading, researching, looking up quotes, writing, reworking and editing his speech on the subject of how “kids can make a difference”.

And then he read it to me. And once again, this beautiful, compassionate, amazing kid of mine blew me away with his comprehension of complex subjects, his empathy for people, and his passion for equality.

But I was just as stunned at how Harry Potter is helping me grow great humans.

Though I am supportive of his decision not to compete, I was sad that no one outside of his class would hear the magical words he so painstakingly prepared. So I asked him if he was happy for me to share them here.

He acquiesced and has recorded them for you all to hear (see video below) … but only on condition that, should you not already own it, you run out and get your kids a copy of Harry Potter immediately, so they too can benefit from its wonderful message of inclusivity and tolerance.

6 Comments on Kids can make a difference: How Harry Potter is helping me grow great humans