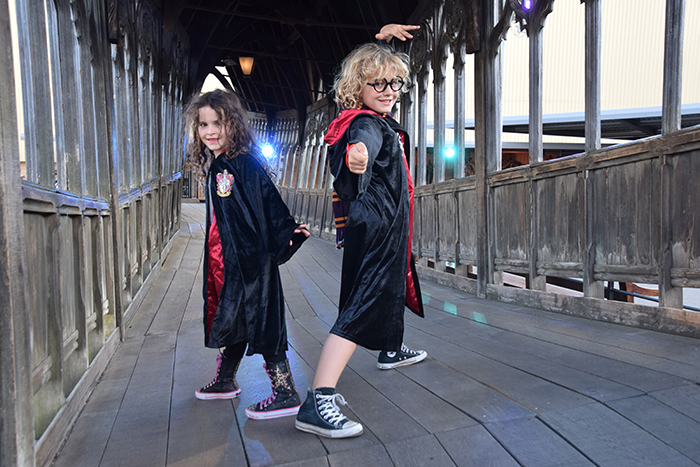 My mum is the only person I know who can actually make magic happen. She’s always conjuring up incredible creations in the kitchen and has this way of making everything my sister and I wish for come true.

And she does it all without even needing to use an accio summoning charm. She is so magic, I reckon she would make an epic teacher at Hogwarts. When I think about it, the signs have been there for a while. I mean, she wears more black than Professor Snape, is as strict but fair as Professor McGonagall, is as kooky as Professor Trelawney, as wise, and old, as Professor Dumbledore, (though less hairy) and she drinks like Hagrid (I’ll probablygetin trouble for saying that). She’s like an ultra wizard. Which is, I think, how she managed to turn our holiday to Britain into a non-stop week of wizarding fun.

You see, I love Harry Potter and all things wizardly almost as much as I love eating, and if you’d ever seen me eat, you’d know that is a lot! And though I knew we were travelling from London to Edinburgh on our way to visit my Gran and Grandad in Norwich, I didn’t know that Professor Mumbledore would conjure a wild wizarding ride out of thin air.

Well not nowhere exactly, it turns out that she’d been secretly planning a special DIY Harry Potter UK Tour for us for months, and every day was packed with Harry Potter fun.

There’s so much to see and do on a London itinerary, but you should definitely leave a day or two for Harry hunting as the city is packed with Potter movie sites, and definitely the best place to start your adventure. Edinburgh is great too, but more for book fans, which I totes am. Here are my personal highlights from our DIY Harry Potter UK tour .

Must see locations for any DIY Harry Potter UK tour 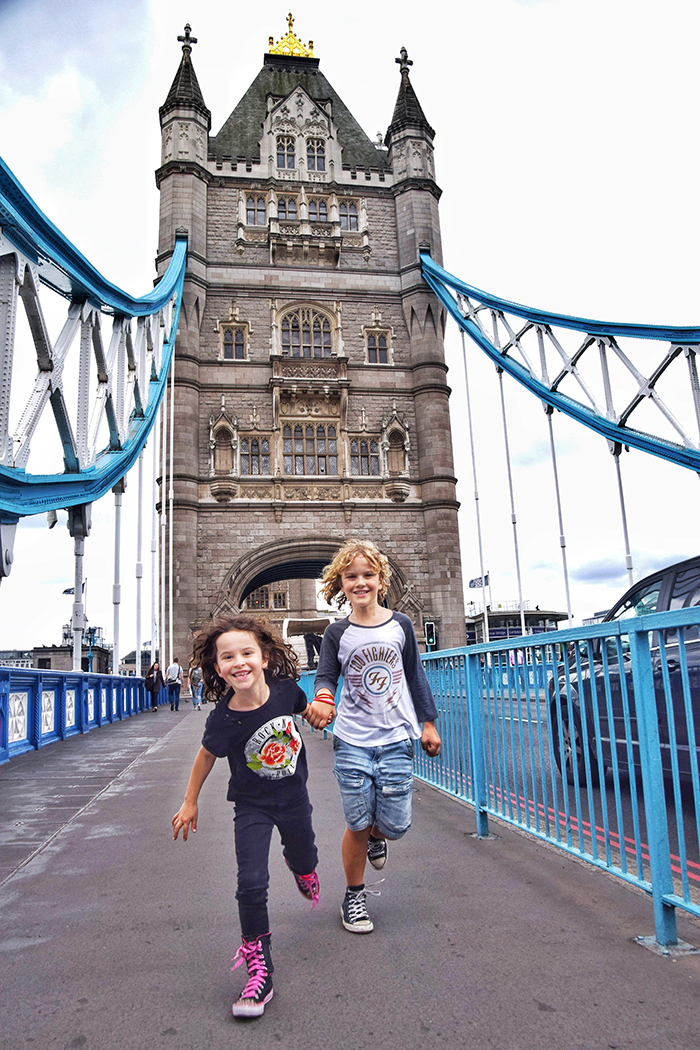 In the ‘Order of the Phoenix”, Harry Potter, Mad Eye Moody and their friends fly over Tower Bridge on their broomsticks. It’s a super cool bridge and though we had to walk, because Mumbledore didn’t think to conjure up any broomsticks, it was awesome to see it in real life.

The Millennium Foot Bridge was pulverised by a pack of Death Eaters in ‘The Half-Blood Prince’ but thankfully when we crossed it didn’t fall down once, and there weren’t any death eaters around.  I know, because I was a bit nervous and checked. 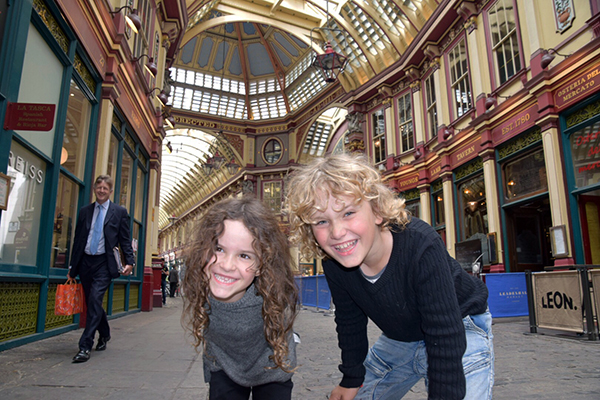 Leadenhall Market is a really old undercover market in London that was used as the entrance to Diagon Alley in “Harry Potter and the Philosopher’s Stone’.

It’s the most super cool place with this awesome ceiling and while we were waiting for fish and chips at one of the restaurants, I spotted the doorway to the Leaky Cauldron.  Although instead of selling fire whiskey and butterbeer it now sells eye glasses. I reckon Dadgrid should have gone in because he needs some … dude’s eyes are so bad I had to read him the menu at the chippie.

We didn’t have a lot of time to spend at London Zoo but did get to visit the Reptile House where Dudley fell into the snake enclosure in “Harry Potter and the Philosophers Stone”. We stayed on the right side of the glass, and none of the snakes winked … because they have no eyelids. I did try on my parseltongue but none of the snakes felt like chatting on our visit. 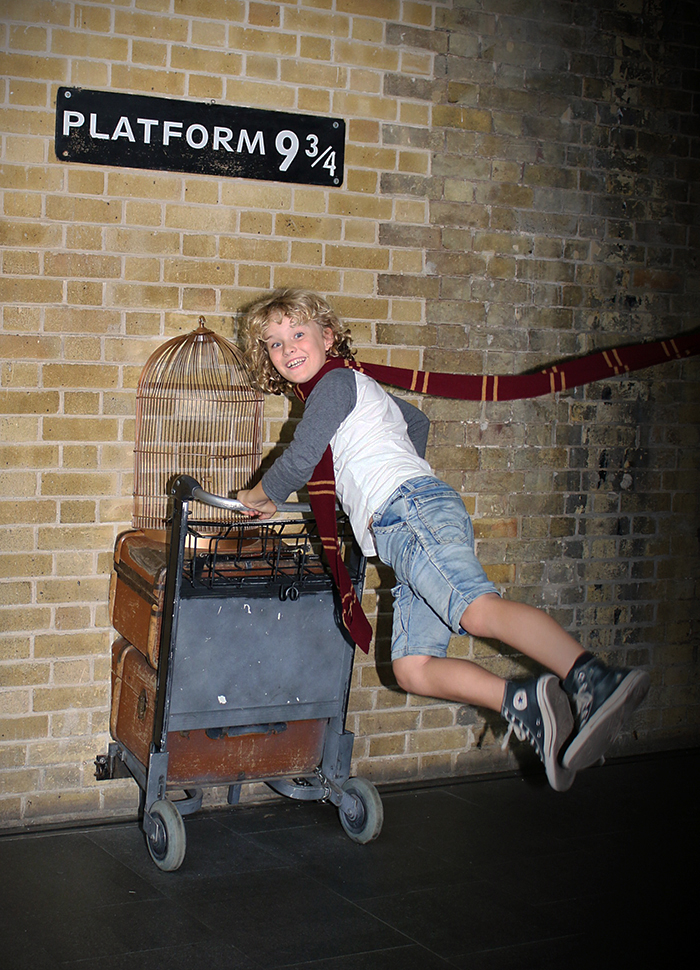 I haven’t received an invitation to Hogwarts, but that’s only because I haven’t turned 11 yet. That didn’t stop me from trying to sneak my way on to the Hogwarts Express at Platform 9 3⁄4 in Kings Cross Station anyway.

Mumbledore says that Platform 9 3/4 isn’t real, but I swear she’s just trying to protect her secret identity as a Wizarding teacher. I had a good go at crossing through the wall, but sadly didn’t make it … this time. I cheered up though when Mumbledore let us loose in the Harry Potter shop next door. I grabbed a box of Bertie Botts Every-Flavoured Beans, though I didn’t realise until I tried them that they’d actually be vomit and rotten egg flavoured. Eww. 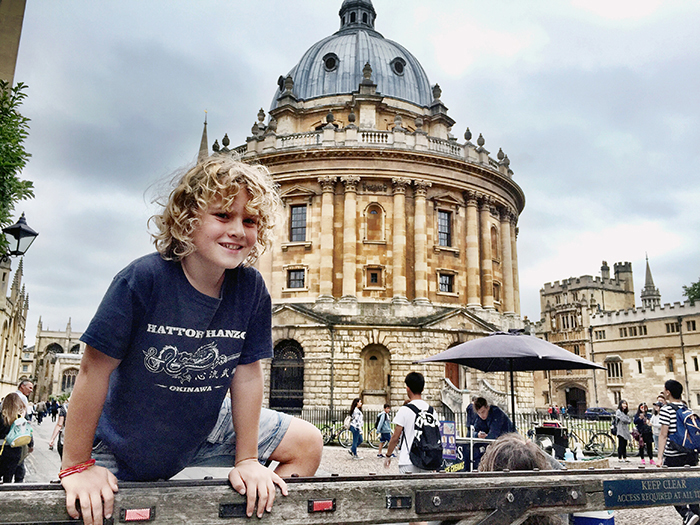 From London we went to Oxford, which is near my Uncle Trevor and Auntie Poppy’s house and lots of magical towns like Marlow. Don’t tell anyone… but I think my Aunty Poppy may secretly be a wizard too because her kitchen is a magical place and she is the first person who has ever been able to make me like lasagne.

Maybe she wore an invisibility cloak to sneak in and steal a recipe for a lasagne love potion from one of the millions of books at Oxford’s Bodleian Library, which was used in a few of the Harry Potter films.

I loved this spot because this is where big meanie, Draco Malfoy, is turned into a ferret in ‘Harry Potter and the Goblet of Fire’. That scene always cracks me up. I tried to use the same spell on my sister but it didn’t work, damn it. Guess I’m stuck with her. 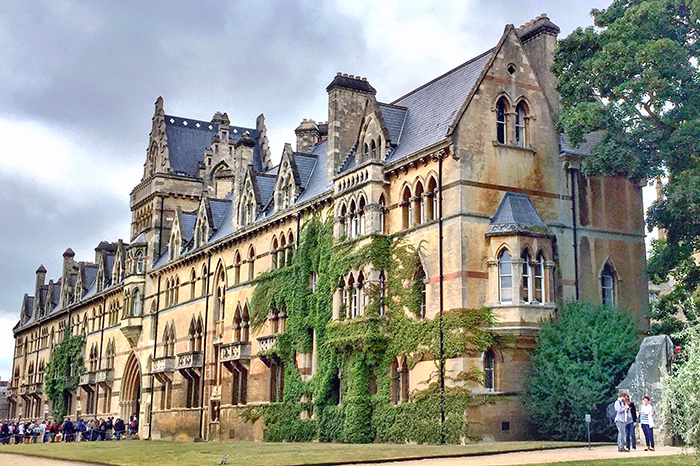 Christchurch College was in in a few of the movies and its Great Hall was the inspiration for Hogwarts Dining Hall. It looked so similar.The Cloisters were also used in the ‘Philosopher’s Stone’ and its stairway and vaulted roof appeared in a couple of the movies.

This was also the place where Harry and Tom Riddle first met. I am happy to report though that Harry’s noseless nemesis wasn’t about on our visit. 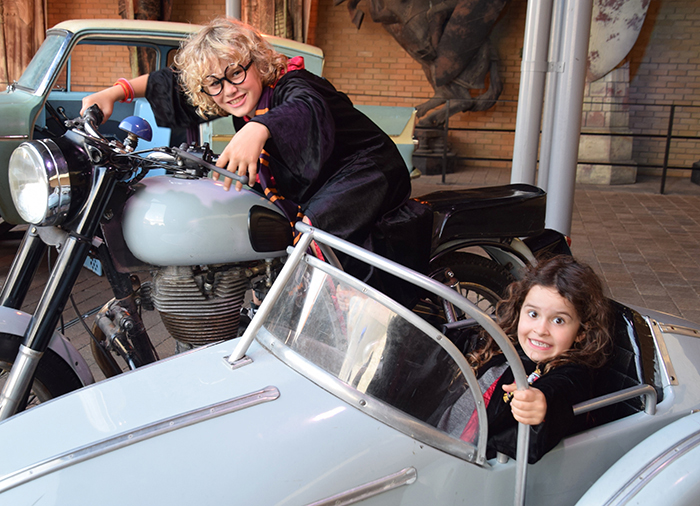 I could have stayed here for a month because the four hours we spent exploring wasn’t nearly enough time to see it all. I got to visit  Dumbledore’s office,  Harry’s bedroom and Snape’s classroom. 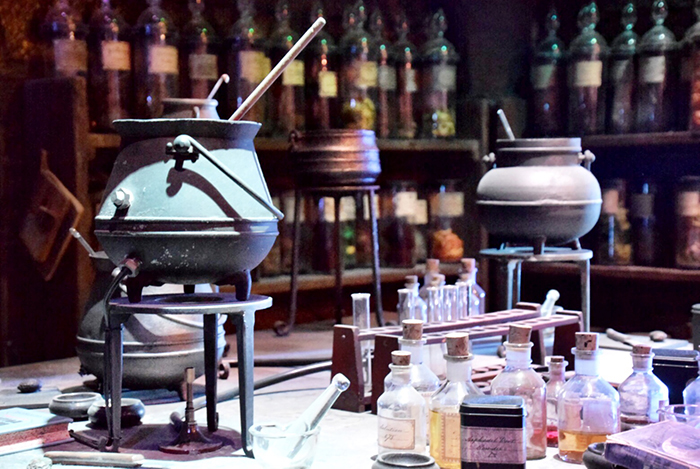 We rode the Hogwarts Express, walked along Diagon Alley and over the Hogwarts Bridge and even visited the Dursley’s house, though they weren’t at home. We visited actual Hogwarts (at least the scale model of Howarts) used in the film. 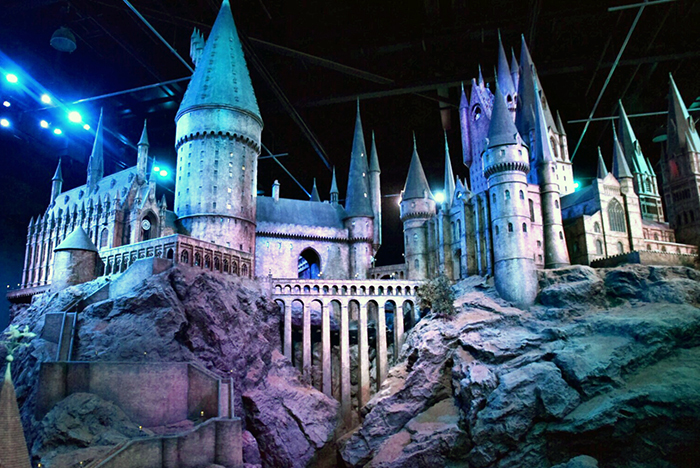 I also got to fly on a broomstick (on a green screen), meet a hippogriff and I bumped into a five-metre tall animatronic spider called Aragog.  Our only stops along the way were for chocolate frogs and a hundred glasses of Butterbeer. 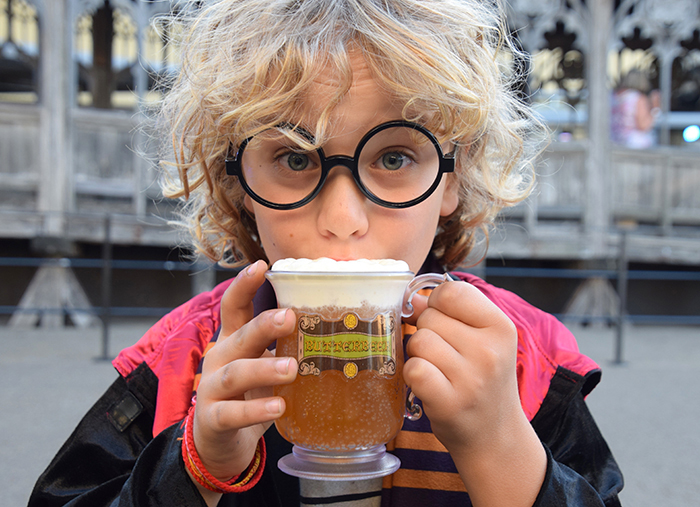 Oh, and if you should ever go, make sure you try butterbeer ice cream, that stuff is genius. 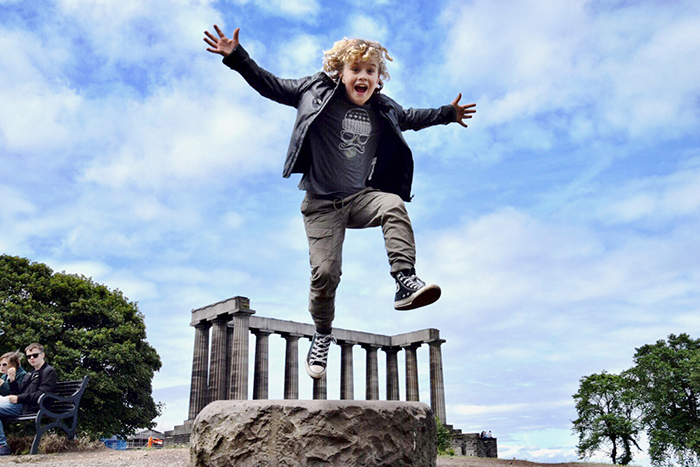 From England we headed all the way up to Edinburgh, which is one of the coolest cities for kids, like, ever. Not only is it super old, it has an enormous castle looming over it … kind of like Hogwarts. Oh, and they make the best scones ever.

But it’s also packed with interesting people including bagpipers and a mad Viking who challenged me to a fight. We even bumped into Darth Vader, a couple of Stormtroopers and Yoda, who was levitating on a street corner.

But we were there to see the city that inspired Harry. Our first stop was for lunch at The Elephant House, the place where J.K. Rowling wrote some of the Harry Potter & The Philosophers Stone. 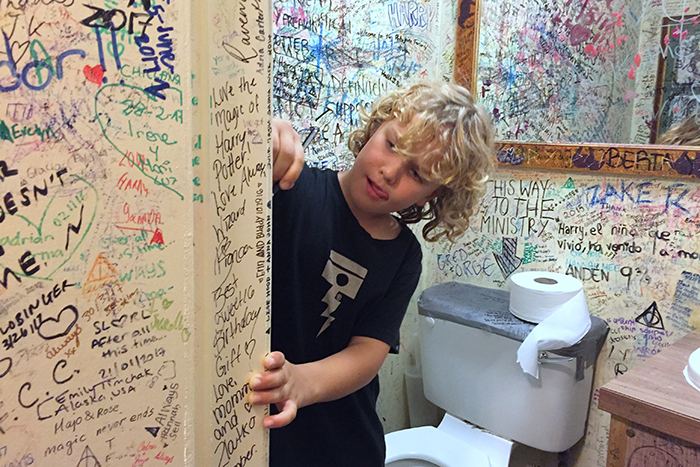 I got to do a little writing of my own, on the women’s toilet wall, which is a graffiti shrine to Harry and J.K.

Out the back of The Elephant House is a spooky graveyard where we spotted Voldemort’s grave. At least the tomb of a man called Thomas Riddell Esq, who is said to have inspired the character’s name. 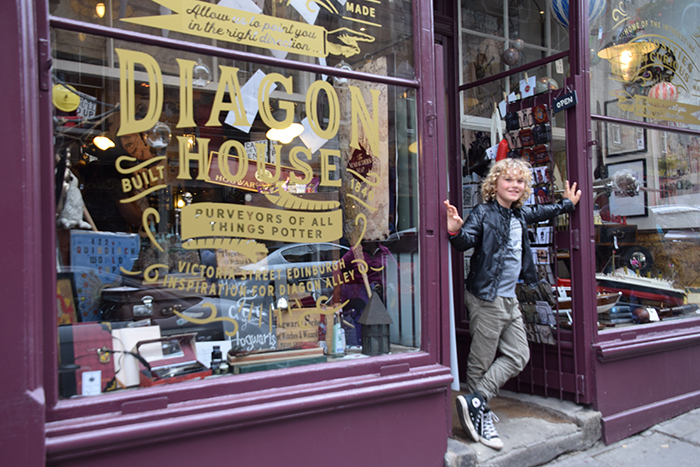 Victoria Street is a long winding cobbled street with funny little shops that might have been the inspiration for Diagon Alley. I reckon it was. There’s a shop called Diagon House that calls itself a purveyor of all things Potter, and even a joke shop that Fred and George Weasley would love. 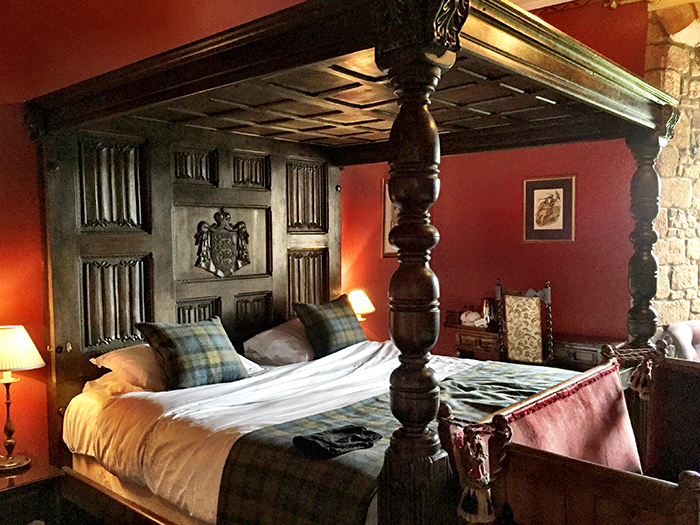 Ok, so first of all I have to say Dalhousie Castle (about 20 minutes outside of Edinburgh), is epic, even if it isn’t really related to Harry Potter. But hear me out. This place is the oldest inhabited castle in Scotland, supposed to be haunted as heck, and its windy staircases and cool ceilings make it look like a baby Hogwarts.

And we got to sleep there. Or at least I did. Mumbledore was too scared to close her eyes because she is a complete and utter chicken. Dadgrid didn’t get much sleep either because every time there was a tiny creak, Mumbledore would freak out and poke him awake. And there were loads of creaks… mostly made by me, mwahahahaha!

But that’s not what made this the most Pottery experience of the entire trip. The reason my magic mum brought me here was because of its on-site falconry. 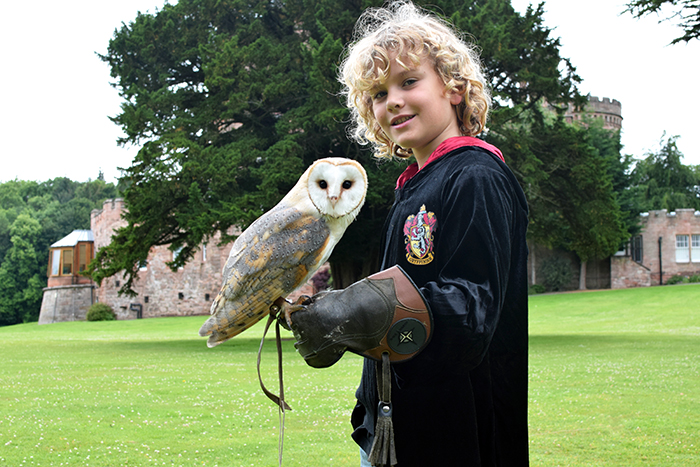 She had sneakily pre-booked us into an actual owl encounter, and we got a private lesson on training them which was the most incredible thing ever. The owls were very well-loved and looked after and one of them was even white, like Hedwig, only way, way cooler. 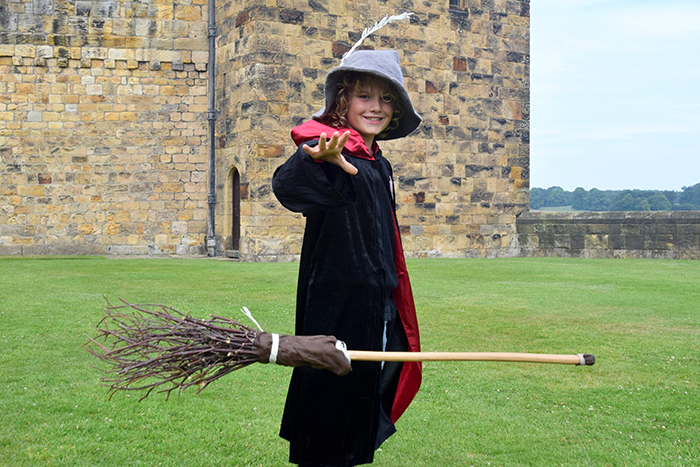 Mumbledore left one of the best experiences until last. Alnwick Castle, which is pronounced Annick because English people can’t speak English, is a gigantic 1000-year old kick-ass castle that starred as Hogwarts in the movies. At least its entrance and courtyards did. It was the place where Ron crashed his dad’s flying car and where Harry first learned to fly. And guess what? It was mine too.

I first learned to train my broomstick to come to me … like a boss!

Then Professor Colin Potshed and Professor Perry Winkle taught me how to fly. And I nailed it, without a green screen in sight. 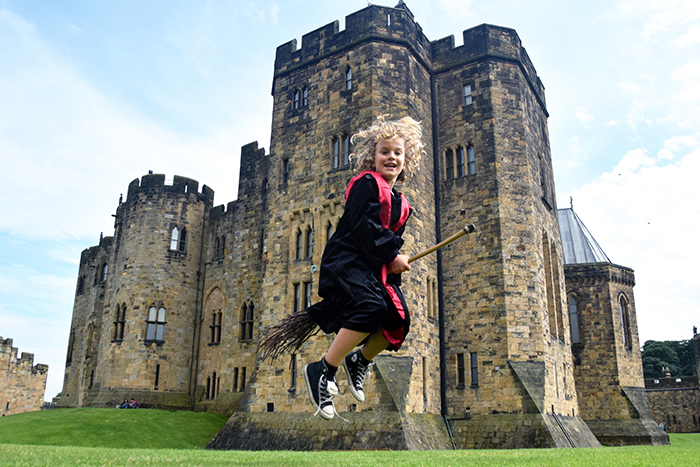 I wish I could share the secret to successful broomstick flying with you all, but as you’re Muggles, I am sworn to secrecy. If you want to learn to fly, you’ll just have to go to Alnwick for yourself.

Seriously, our DIY Harry Potter UK tour was the most epic adventure, and I loved it so much that now I want to Mumbledore to take me to New York to find Fantastic Beasts, even if I do have to cast an Imperius Curse to convince her!

About the author: The perpetually hungry boy in BoyEatsWorld, Raff (10) is an experienced travel television presenter, published travel writer, and an award winning public speaker who has presented at International travel events.