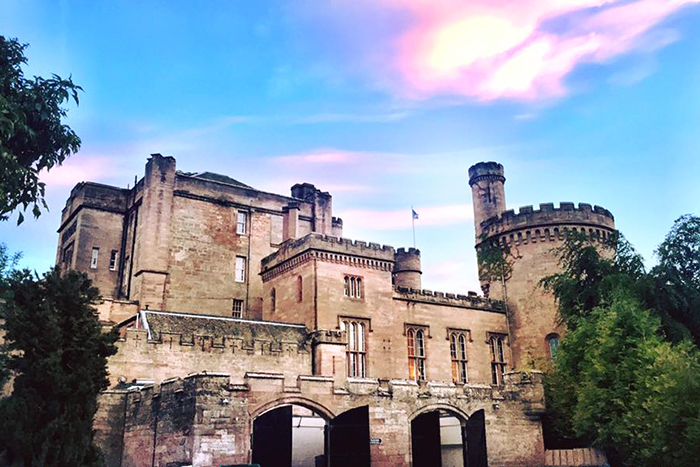 Imagine if you will a magnificent 13th century fortress, set within acres of wooded parkland on the banks of a picturesque Scottish river? Then imagine storming it with two rampaging small people!

Dalhousie Castle, 20 minutes’ drive south of gorgeous kid-friendly Edinburgh, was once the stronghold of the chieftains of Clan Ramsay and is Scotland’s oldest inhabited castle. These days, it’s a luxurious boutique hotel where you can live in baronial splendour, even with a couple of tear-arse terrors in tow. 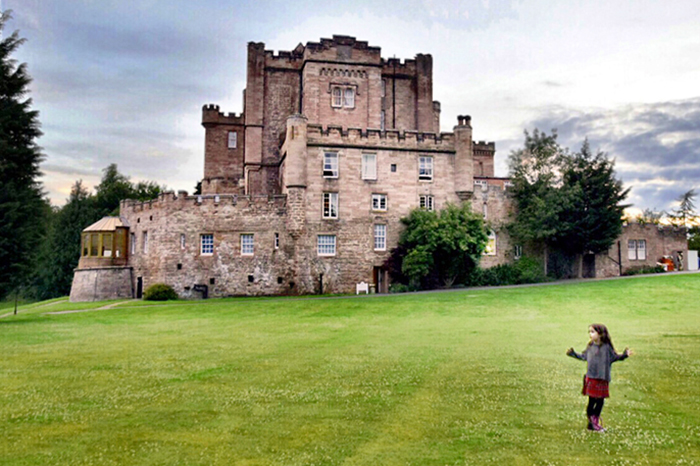 Only the thick foundation walls and stone vaults are original, and the moat and drawbridge are just a memory. Other parts of the majestic residence still standing today were built around 1450. Today Dalhousie’s 700-year history is sensitively reflected in its restoration, which mixes medieval stateliness with the quirky architectural eccentricities of its many former owners. 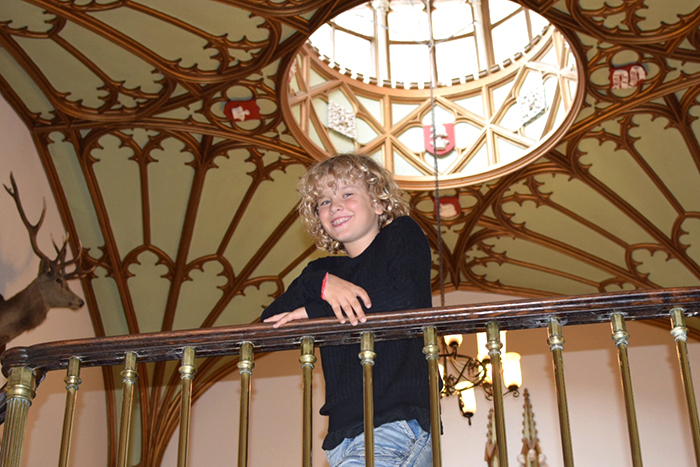 Check out this map of more Castles in Scotland.

As we enter the grand foyer with its glorious vaulted Gothic ceiling, I decide that I am more than happy to add my name to its list of illustrious guests including King Edward I, Mary, Queen of Scots, Queen Victoria, Oliver Cromwell and Sir Walter Scott, who stopped in for a nap and a cuppa before defeating William Wallace.

As well as its regal residents, it is also alleged to be spook central. My mystery loving kids, who’ve watched one too many episodes of Scooby Doo, are rather excited by this. But as a card-carrying chicken shit, I must confess I’m a little nervous about our sleepover. 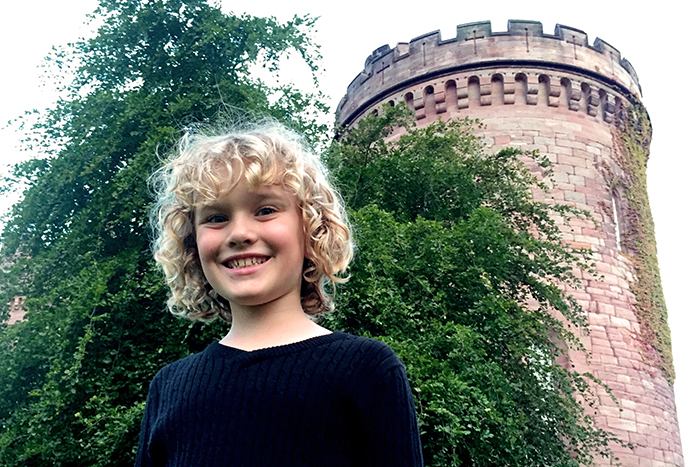 Carpeted corridors and creaky staircases lead to oak-panelled public rooms, their walls secreting many lifetimes of tales, both dark and delightful.

There are 29 uniquely styled bedrooms within the castle walls, some bearing the names of historical former residents including the aforementioned Queen, Oliver Cromwell and Lady Catherine, one of the castle’s resident ghosts. 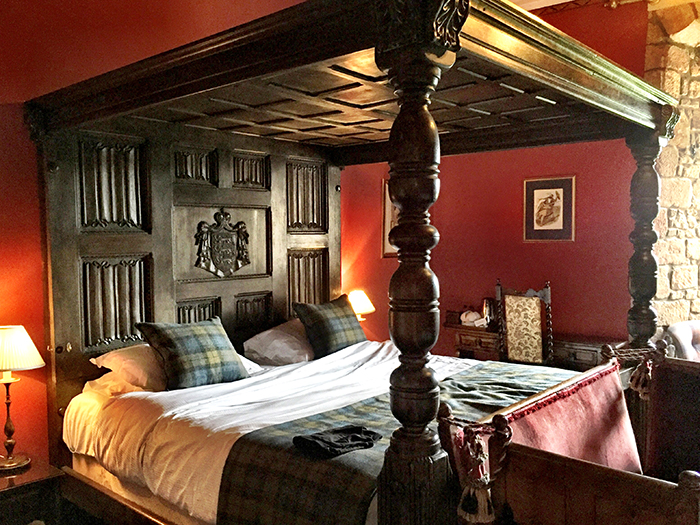 We’re bunking down in a sumptuous four-poster themed room, and it is swoon-inducingly beautiful. With its exposed stonework, deep red walls, rich Scottish fabrics, sky-high ceiling and elaborately carved ancient four poster bed, it is one of the most breathtakingly beautiful rooms I have ever slept in. Not that I expect much sleep will actually be taking place in it by myself or Mr Eats World.

And no, not because we’re engaging in any olde worlde sexy time. It is because I will be slapping him about the head if he dares to fall asleep before I do due to my being terrified of nocturnal visits from the aforementioned Lady Catherine.

The 16-year old noble died of a broken heart after being locked in the castle tower in 1695 after she was sprung getting saucy with a stable hand.  She’s better known these days for turning up uninvited to weddings at the castle, walking through walls, waving from windows and plonking herself at the end of guest beds. And I’m sorry but I’m totes not woke on the lingo of cray 338-year old teenagers, so if ye olde bae rocks up at the end of my bed for a little middle of the night chit chat things are going to get awks AF – especially when I crap myself and speed dial a kilted ghostbuster. 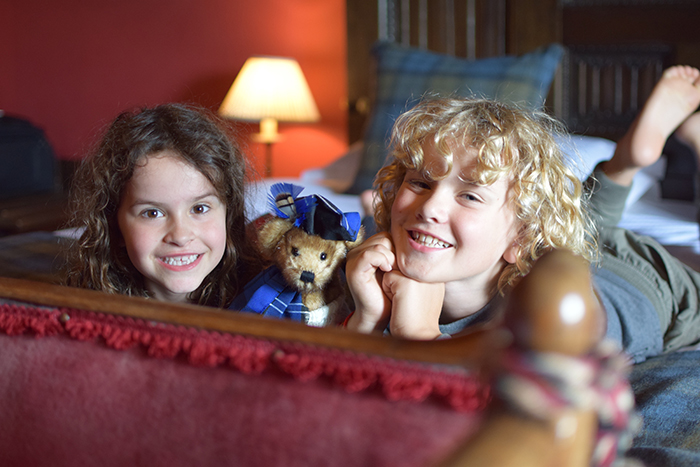 Luckily the only ghouls who rock up are my own pesky kids, who thought it was hilarious to hide under a white sheet to scare their mother when she came out of the bathroom. 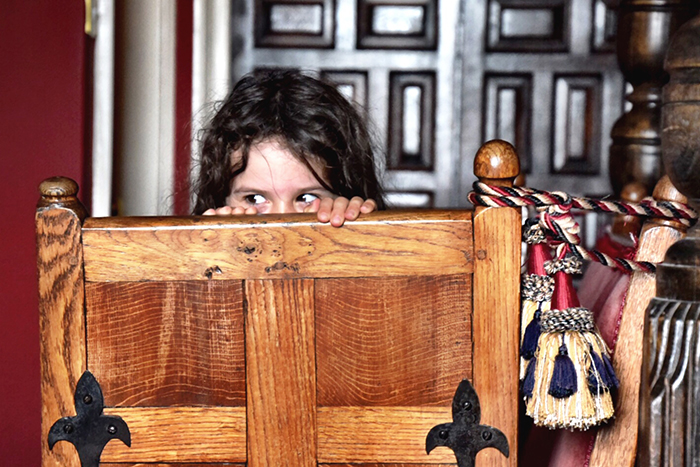 I’m also joined by an absolutely divine teddy bear, who I find on my pillow, but the kids swiftly abscond with him to their own beds. 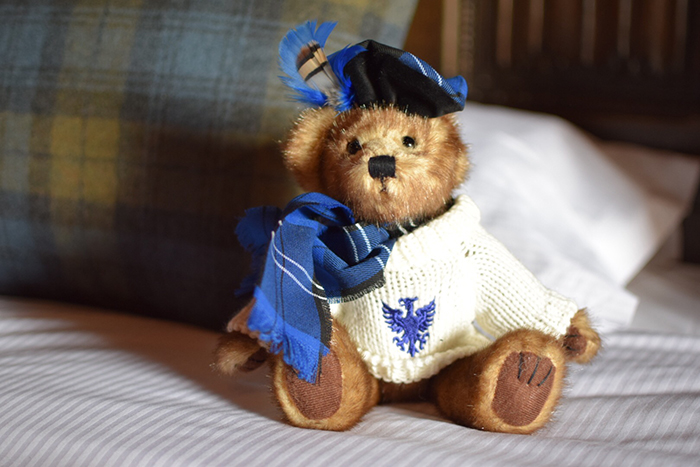 Regardless of the poltergeist paranoia, it turns out my love of history and utterly gorgeous castle hotels outweighs my fear of teenage ghosts, and thus far I’ve not had even a hint of anything slightly supernatural, so decide to soak up the atmosphere and beauty of our fabulously historic digs. 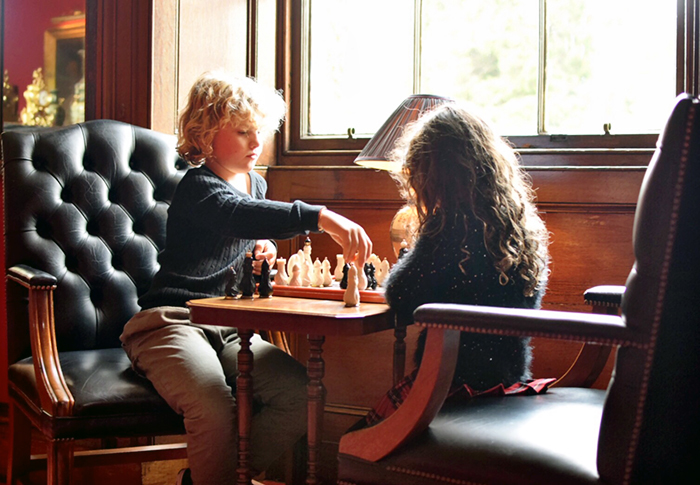 We head on a guided tour of the stately castle to hear more about its fascinating history and quirky features. 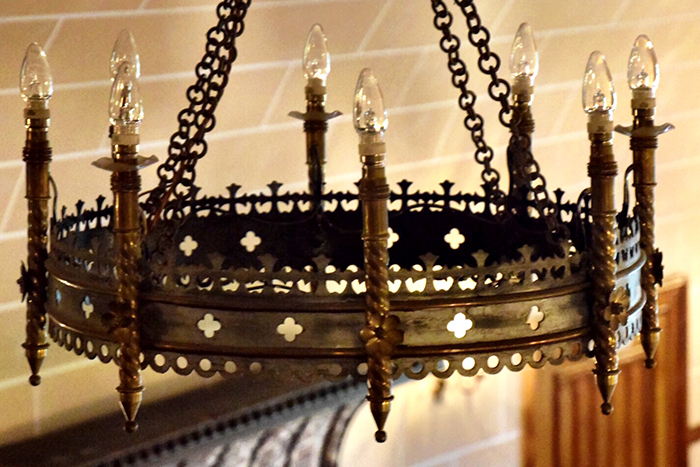 Unlike his mother, who leans more toward being the scaredy cat Shaggy of our Scooby crew, Raffles is more of a fearless Fred, ready and raring to solve mysteries. Ergo, when we are invited to go down a spiral stair case into Dalhousie Castle’s grim bottle dungeon, where for centuries prisoners were lowered by rope to rot in the darkness of its 30-centimetre thick walls, Raffles bounds straight down to explore. 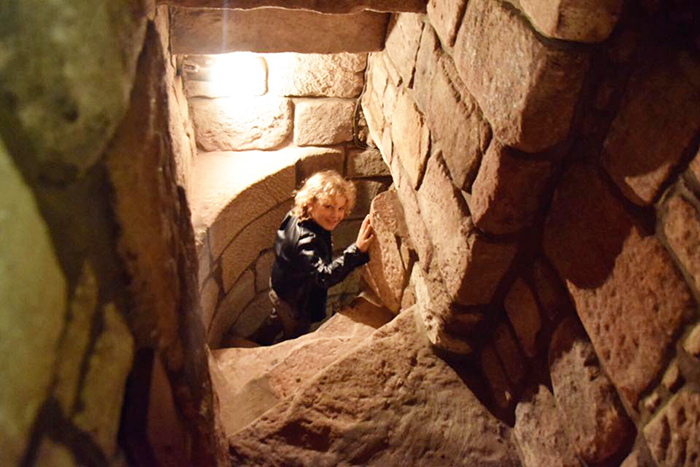 Me? I leave him to it and head off in search of some of Dalhousie’s high-end Scooby snacks and a chilled glass of champagne.

The falconry at Dalhousie Castle

To give my overactive imagination a break, we decide to take a leisurely walk around the castle grounds, over lush rolling lawns and down to the River Elk. 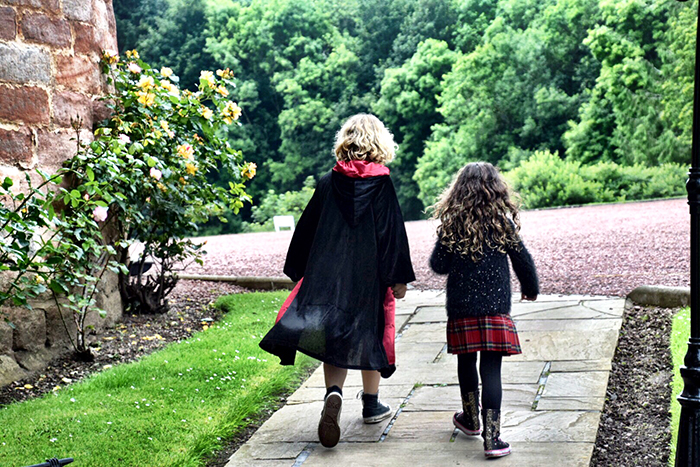 A slightly obsessed Raffy Potter is now rocking a Hogwarts uniform because he’s  convinced we’ve entered a side campus of Hogwarts. This is mostly due to the discovery of the castle’s onsite Falconry, and its collection of much loved and extremely affectionate owls. 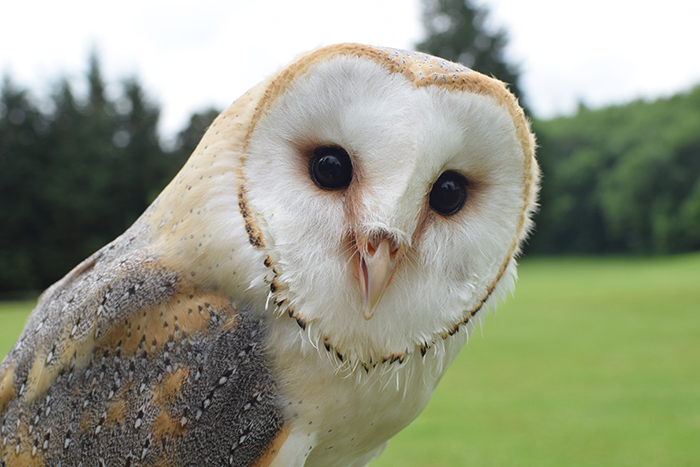 We enjoy a little time with our cuddly new owl pals Bandit the Boobook and Bob the Barn Owl, and undertake an hour long session with the owls-in-training. 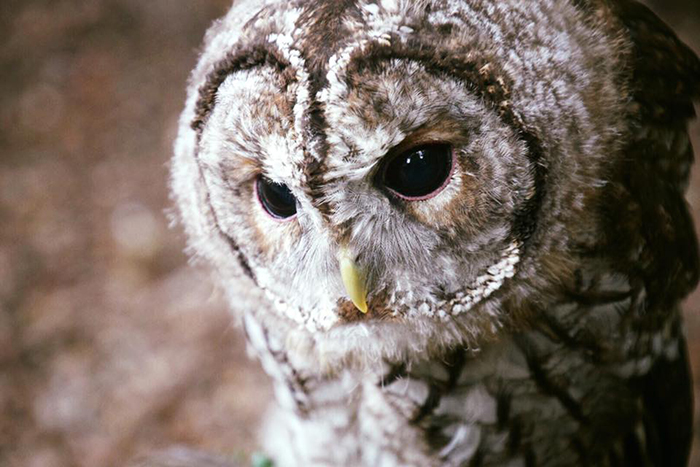 The kids are left in stunned awe as the gorgeous young owls silently glide through the sky to land on their gloved hands. Hedwig who? 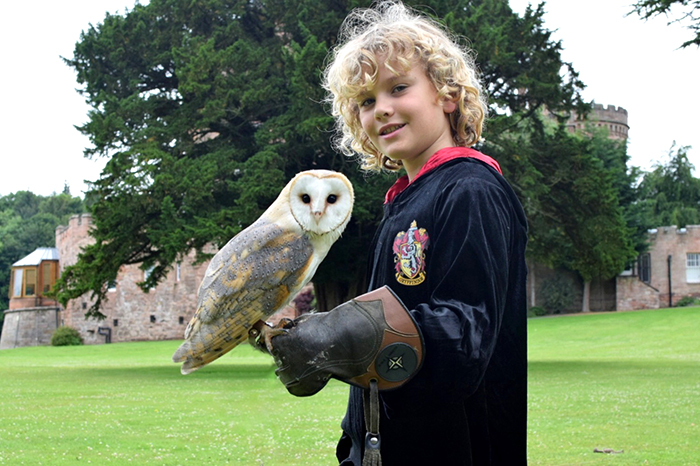 In a place that is already all kinds of perfect, their close encounter of the owl kind leaves the kids enchanted, and Raffles floating on a wizardly high, having had one of his wildest Hogwarts fantasies come to life. Speaking of fantasies, the owls even divert me from my spooky imaginings.

We skip back to our gorgeous room to prepare ourselves for dinner. 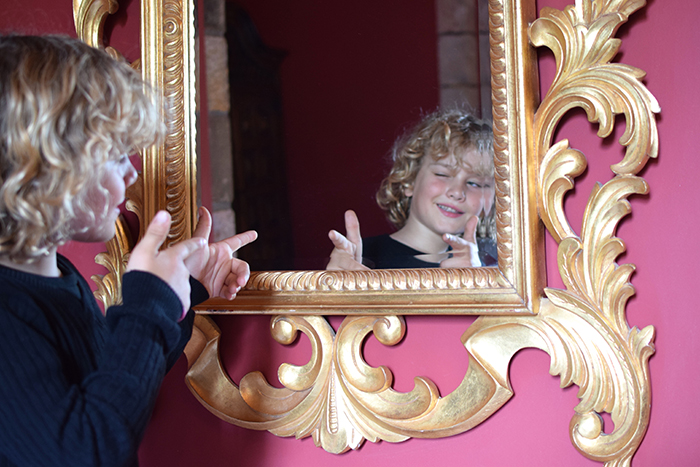 Dalhousie offers a choice of two restaurants. There’s casual dining at The Orangery and formal dining in The Dungeon, which is housed quite literally in the 730-year old castle’s original barrel-vaulted stone dungeons. We choose the latter. 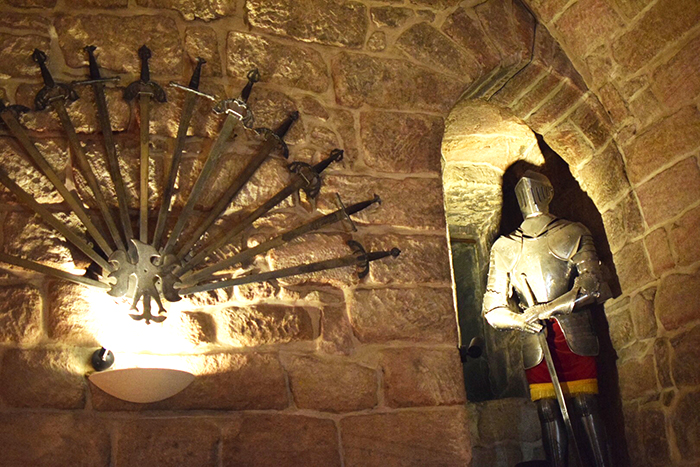 But first we sip on a pre-dinner whisky or three, which magically appear from a hidden bar, in the impressive library. 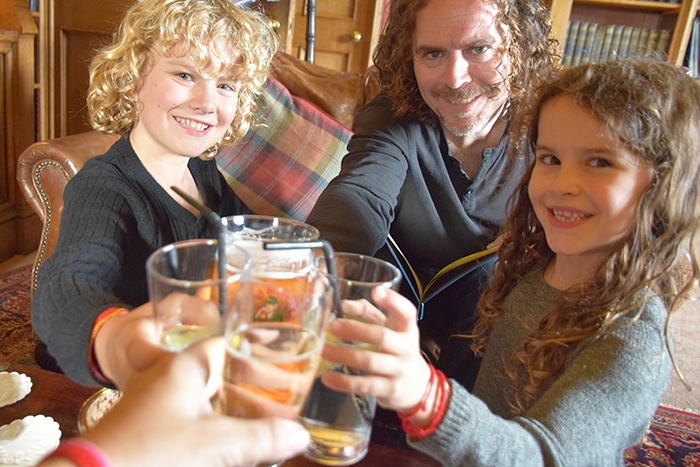 We nibble on exquisitely-crafted canapés in front of a fireplace while perusing the evening’s culinary offerings before being escorted down to the 2 AA Rosette restaurant (a bit like Australia’s hat ratings or a Michelin star). 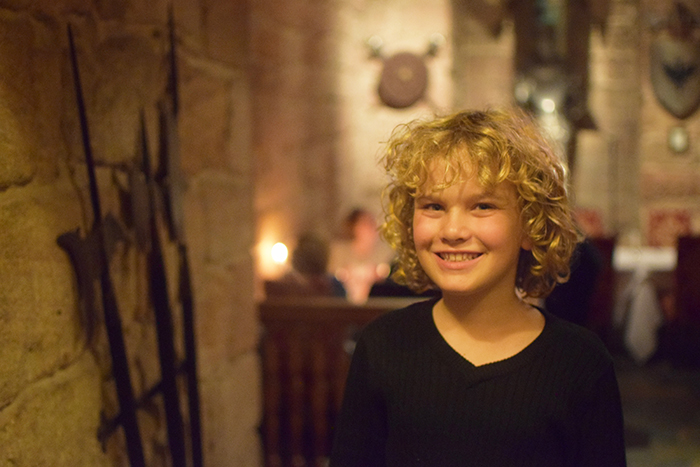 The Dungeon boasts a menu of modern Scottish cuisine using only the finest local ingredients prepared with European flair.  And it is the stuff of last meal fantasies … appropriate given the setting. Dining on the sublime multi course meal of venison carpaccio with fresh shaved truffles, smoked duck, Scottish salmon and a selection of delightful Scottish cheeses in the candlelit dungeon proves to be an incredible dining experience. 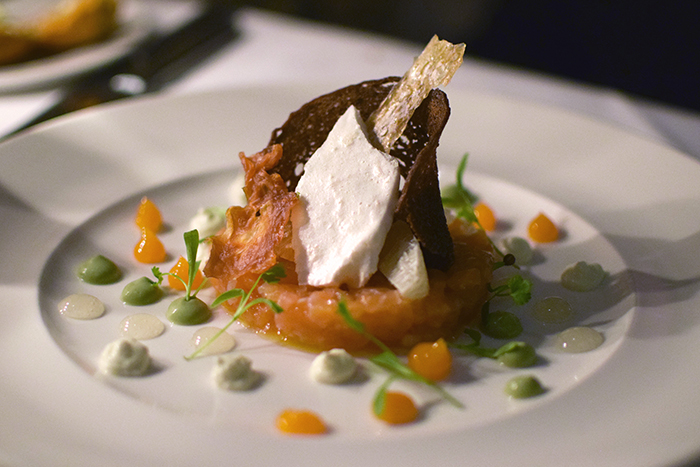 In fact, if this is Dalhousie’s take on prison food, they can lock us up and throw away the key.

But only after I’ve been granted my last request of several hours in the castle’s Aqueous Spa, indulging its hydro pool, mud baths, Turkish steam bath and menu of fabulous treatments. Because you know, a girl needs to look and feel her very best, even if it is for an extended stay in a medieval lock up.

More to explore in Edinburgh: Click here for a great five day itinerary of delights for families to explore.

Getting there: Dalhousie Castle is situated near the town of Bonnyrigg, an easy 13-kilometre drive south of Edinburgh. Parking is available on site.

Kids view: Click here for a kids view on what to see and do in Edinburgh.