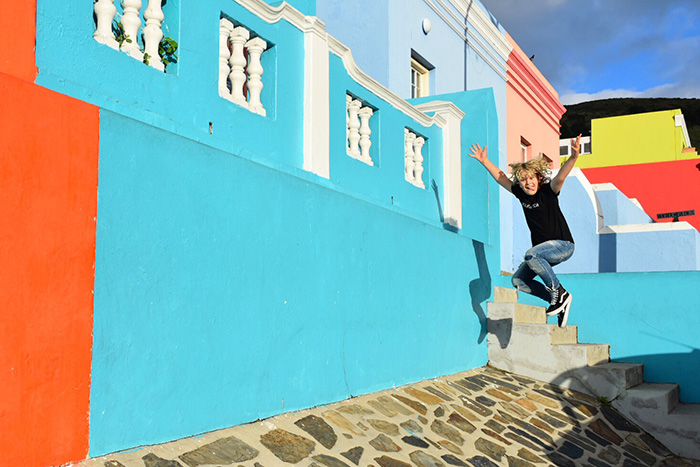 Imagine if you will narrow cobbled streets strung with continuous rows of low-roofed houses, sitting under an imposing mountain backdrop and bright blue skies. Now pop on your imaginary sunnies and paint those houses in varying shades of canary yellow, cobalt blue, perky purple, retina searing pink and acid green: a place so colourful you could be forgiven for thinking a unicorn threw up on it. Now imagine such a place exists. In Cape Town. As I discovered on a Bo Kaap walking tour with kids.

Quirky, charismatic and oh, so colourful, Cape Town’s Bo Kaap is situated at the foot of Signal Hill, on the fringe of the Cape Town city centre. 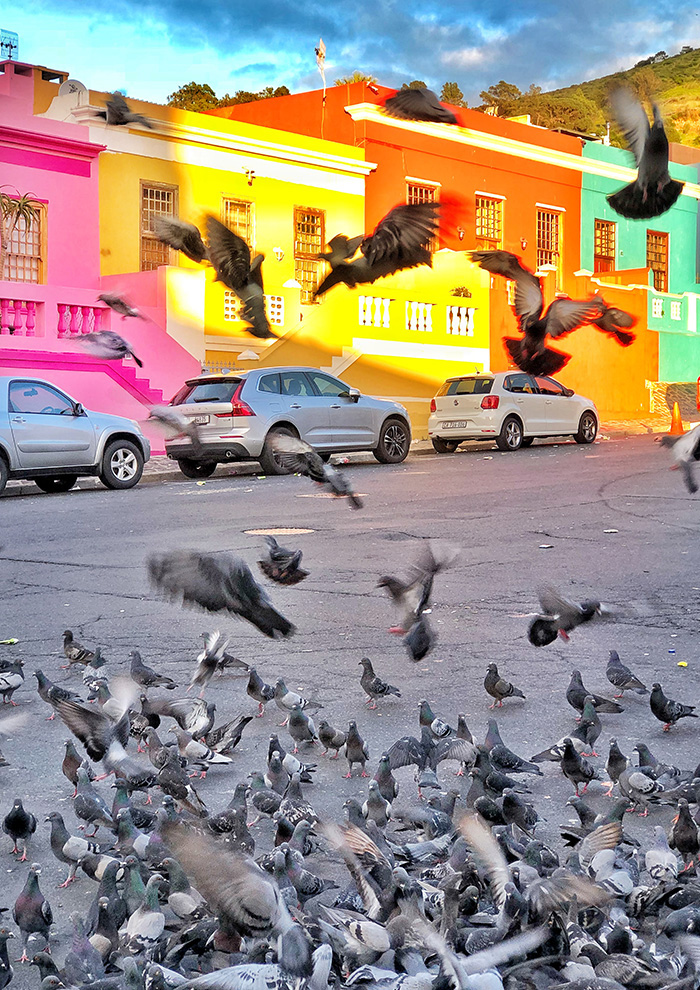 As one of the oldest urban residential areas in the city, it is not only steeped in rich history but, for better or worse, saturated with Instahappy tourists in search of the perfect selfie.

When exploring Bo Kaap with kids, it’s important not to allow the colourful ambience of its architecture let you overlook the area’s less cheery beginnings. Formerly known as the Malay Quarter, the first buildings in Bo Kaap (which means “above the cape” in English) were built in the mid-1700s to house slaves imported from India, Sri Lanka, Malaysia and Indonesia by the Dutch East India Company.

The Eastern slaves, often highly skilled in crafts, were considered too useful to be employed in agriculture and were purchased by Burghers in town, usually at a high price, and housed in Slave Lodges. Dating back to 1679, the Iziko Slave Lodge, on the corner of Adderley and Wale St, is the second oldest building in South Africa and served not only as a lodge for hundreds of slaves, but as the first post office, library and supreme court. It’s now a museum exploring human rights and the long history of slavery in South Africa.

Construction on the Auwal Mosque in Dorp Street, just one of around ten mosques in Bo Kaap and the first to be established in South Africa, began in 1794. Remarkably, the first Imam is said to have written the mosque’s first copies of the Quran from memory. The faithful, however, weren’t allowed to recite it or practice their religion in public until after the British seized power of Cape Town a few years later. 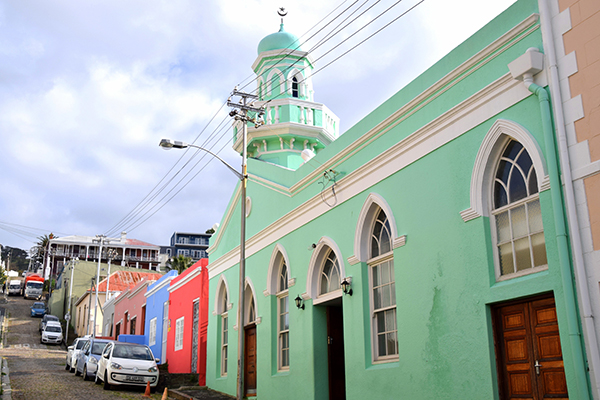 These predominantly Muslim slaves and their descendants became known as Cape Malays and with them brought their own fragrant native spices and dishes, which formed the beginnings of the distinctive cuisine we smell wafting temptingly from the traditional street vendors and restaurants that still dot the area. 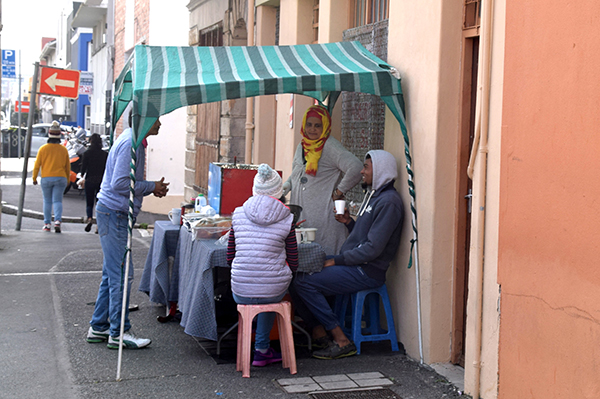 Of course, we’re tempted into submission and soon I find myself scarfing Bobotie (a spiced mince dish with a savoury custard topping) whilst 11-year old Raff tackles a crayfish curry at Biesmiellah, an iconic eatery that’s been serving traditional Cape Malay cuisine for 40 years. Less adventurous Sugarpuff is content with a mango lassi and some flaky roti.

If you’ve as much of a thing for spice as we do, don’t miss Atlas Spices, a fragrant spice shop housed in a pink house in Wale Street, or take it to the next level with a half-day cooking course with Zainie Misbach of The Bo-Kaap Cooking Tour, who’ll teach  you to cook like a Cape Malay ‘Auntie’. 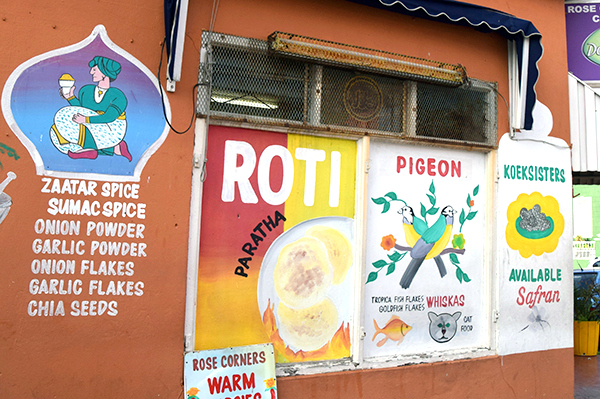 If you don’t have time for a Cape Malay meal (and you really should), at least drop in to the landmark Rose Corner Café for a koesister (a sweet Cape Malay donut that’s not to be confused with the Afrikaans-style koeksister) and a samoosa or six, something that became a morning ritual to satiate Raff’s cravings during our stay. 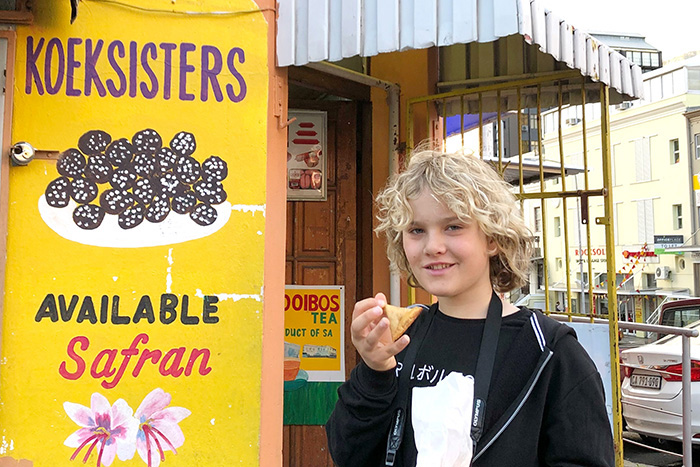 In the 1830s the British abolished the slave trade and the emancipated slaves settled in the Bo Kaap. The once white houses suddenly burst into every colour imaginable as each year the residents began slapping on coats of high impact paint to brighten their homes for Eid, the religious holiday that marks the end of Ramadan. 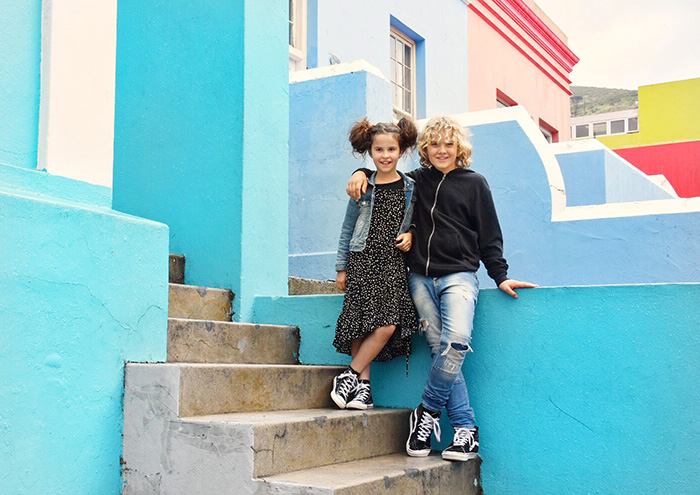 In the mid-twentieth century, the Apartheid government – who made mixing with people from a different racial “category” a crime – declared the Bo Kaap a Muslim-only area and forced people of other religions and ethnicity to relocate, creating a closed but close-knit community. 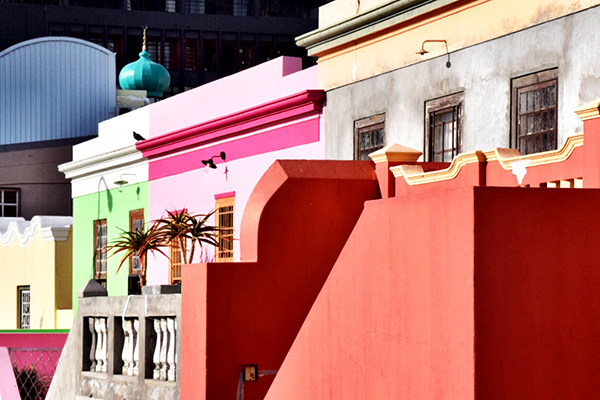 The freedom of post-apartheid South Africa opened up the world to the Bo Kaap residents, but while it retains much of its character, the area is fast becoming gentrified, meaning many of its original residents, and its history, are sadly being lost to hipster filled cafes and soaring house prices and rents. 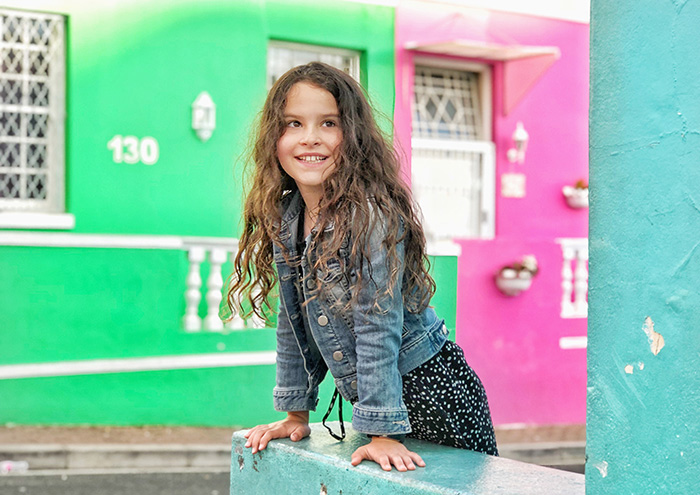 Whilst you might expect kids to be bored with wandering the streets looking at houses, mine were anything but as they excitedly skipped from rainbow-hued street to street soaking up the scents, sounds and atmosphere of this gorgeous area. 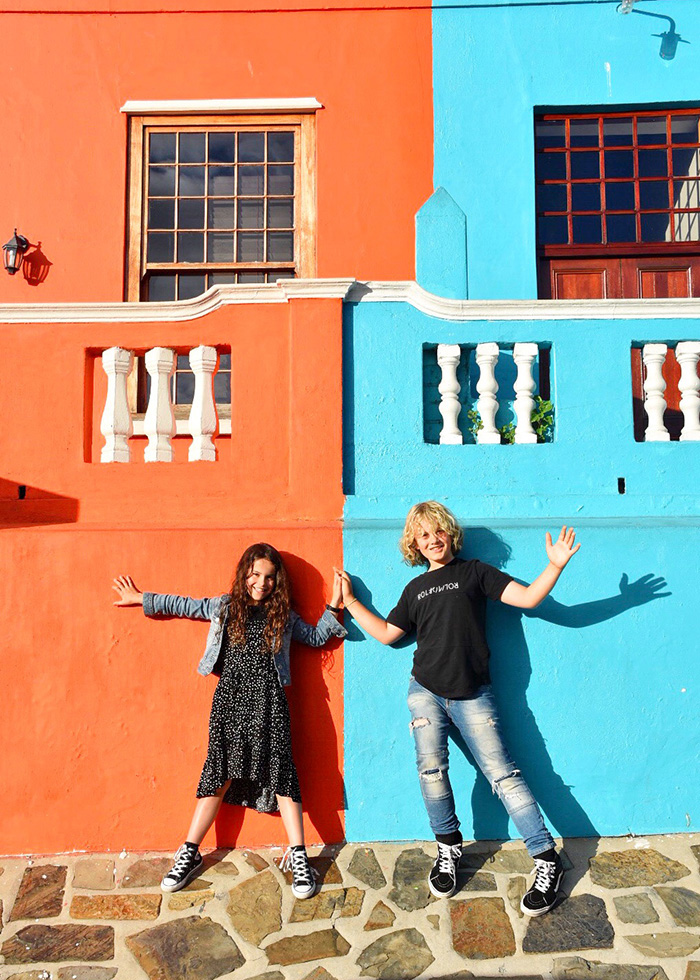 In fact, they loved it so much, they insisted on walking from our hotel before breakfast each morning to explore a little more while the streets were quiet. 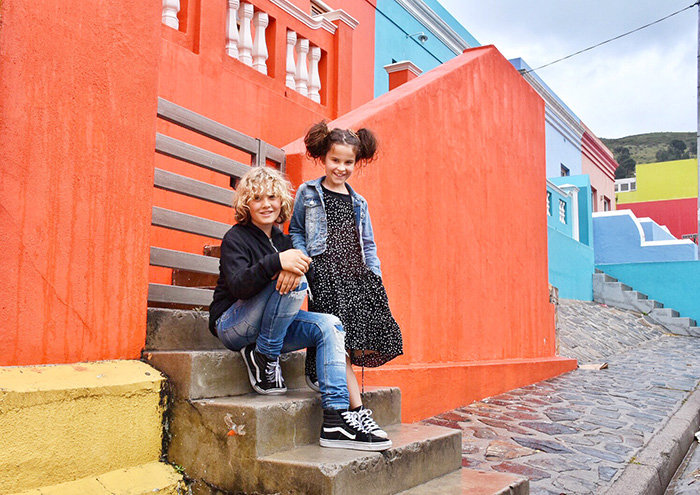 With the pretty coloured houses now a popular tourist attraction, it is important for visitors to remember the rich history that created the backdrop for the snazzy selfie they’re seeking.

And visitors must also consider that the sunshiny bright houses we are photographing are still people’s homes so keep yourself on the street and outside gates. The occupants, whilst mostly welcoming of tourists, are deserving of privacy – something a few selfie stick wielding Instadouches we spotted appeared to have forgotten as they leapt over people’s gates and clambered over people’s porches.

A visit to the Bo Kaap doesn’t cost a dime but neither does showing a little respect.

From B&Bs to self-catering apartments and boutique hotels, there’s plenty of accommodation choice in The Bo Kaap. 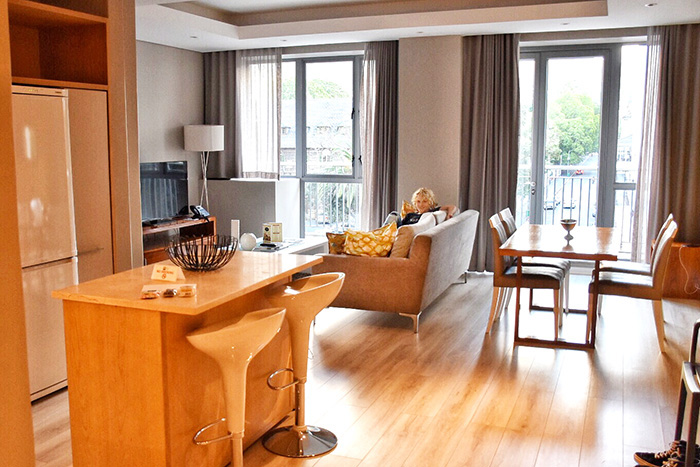 However, we found the best option for families was the gorgeous Mandela Rhodes Place, located further down Wale Street opposite the St. George’s Cathedral, where Desmond Tutu, the first black archbishop of South Africa, led marches and campaigns for the end of apartheid. 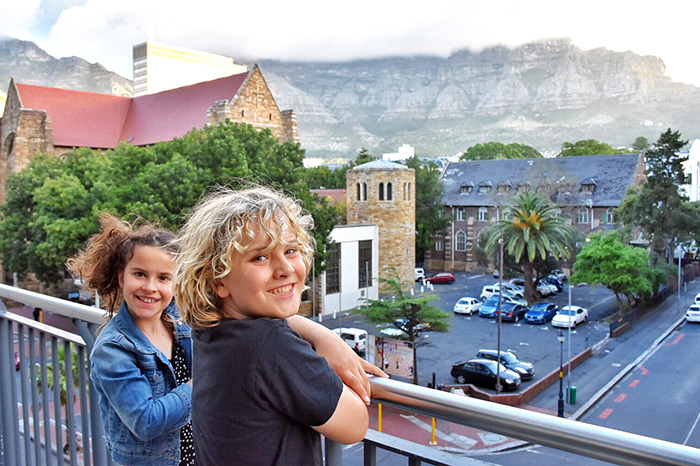 The hotel offers fully serviced all-suite style apartments that are both luxurious and spacious, each boasting a kitchenette, dining areas and separate living and sleeping quarters. Ours also had a balcony offering fantastic views over St George’s Cathedral and Table Mountain. 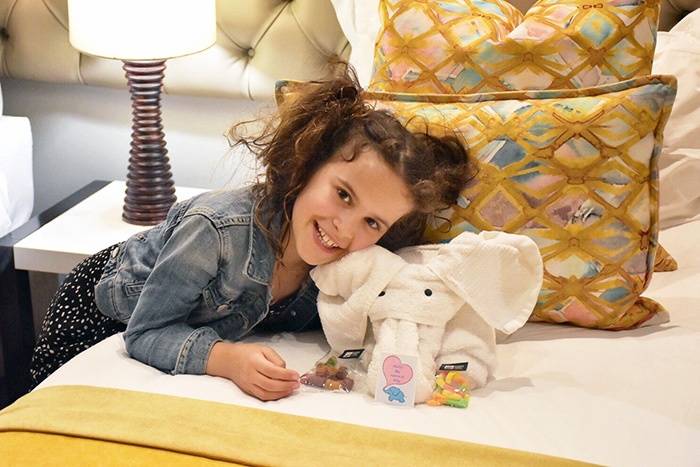 Kids are made feel very welcome, with sweets and welcome gifts in the room. Plus the hotel offers a friendly concierge service, a choice of restaurants and a rooftop swimming pool that’s a big hit with the kids when they feel like cooling off after a day of exploring Cape Town. And best of all, it’s only a few hundred metres from the colourful centre of Bo Kaap.

For other great things to do with kids in CapeTown click here.

When to visit
Great weather makes Cape Town a great year-round destination.
Language
While English is widely spoken, especially in the city, there are 11 official languages spoken in South Africa and the most commonly spoken languages are Zulu, Xhosa, and Afrikaans.
Currency
The Rand (R)
Power
Voltage is 230V and 50Hz. Power outlets are round three pin sockets.
Visa & Passport Requirements
A South African tourist visa is not required for citizens of Australia for a stay up to 90 days.  South Africa requires that all children entering or leaving the country carry an unabridged birth certificate and parental consent affidavits if they are travelling with only one parent. All visitors will require a passport valid for at least six (6) months.
Health
Cape Town is free from malaria and safe for travellers of all age. While there are no essential vaccinations for travellers to South Africa at the time of publication, we advise visiting your family GP at least six weeks before travel for up to date advice on the latest recommendations and necessary immunisations.
Crime
Crime is an issue throughout South Africa. And in Cape Town, like any city, crime does exist but 95% of serious crime occurs in the communities of the Cape Flats area, where it is not advised to go. Pick pockets can be an issue in the city centre and muggings are known to occur in Table Mountain National Park so it’s best to go with a guide and always keep cash and valuables such as flashy jewellery, cameras and phones out of sight. It is not recommended to catch public transport or walk after dark. If you do need to go out at night, UBERs are the safest option.