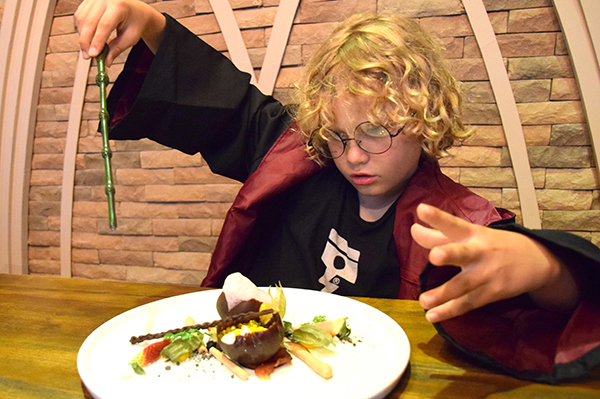 When I heard that a Harry Potter themed café called Platform 1094 had opened just a few weeks before our visit to Singapore, you know I had to go.

It was a little out of the way and hard to find without broomsticks, and it was so new that the taxi drivers hadn’t even heard of it. But once we arrived at Platform 1094 it was so packed with other in-the-know wizards and witches that we were lucky to get a table.

Everyone was wearing Hogwarts ties and capes and wearing pointy hats, most of which they’d grabbed from the dress up table just inside the entrance. Of course I had to join in on that action so I dressed my sister in a witch’s hat and I chucked on a robe and glasses, and we both grabbed wands to prepare for a magic meal. 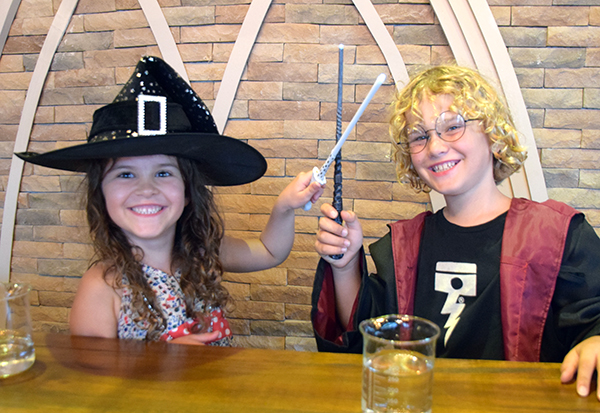 Platform 1094 is decorated with stone walls, arches, chairs with pictures of stags ( Harry’s Patronus) and a fancy candelabra hanging from the roof. But I’ve got to say that Harry Potter is more of a vibe here. Actually, nowhere on the menu or in the restaurant are the books or movies actually mentioned, just hinted at, so I guess it doesn’t have J.K. Rowling’s official tick of approval. But that doesn’t mean it’s doesn’t get mine. It was super fun.

We started with a few magical potions. My sister and I ordered drinks that looked like tankards of butter beer, which I found a little sweet, and mum had a flaming brew that was like a real goblet of fire. 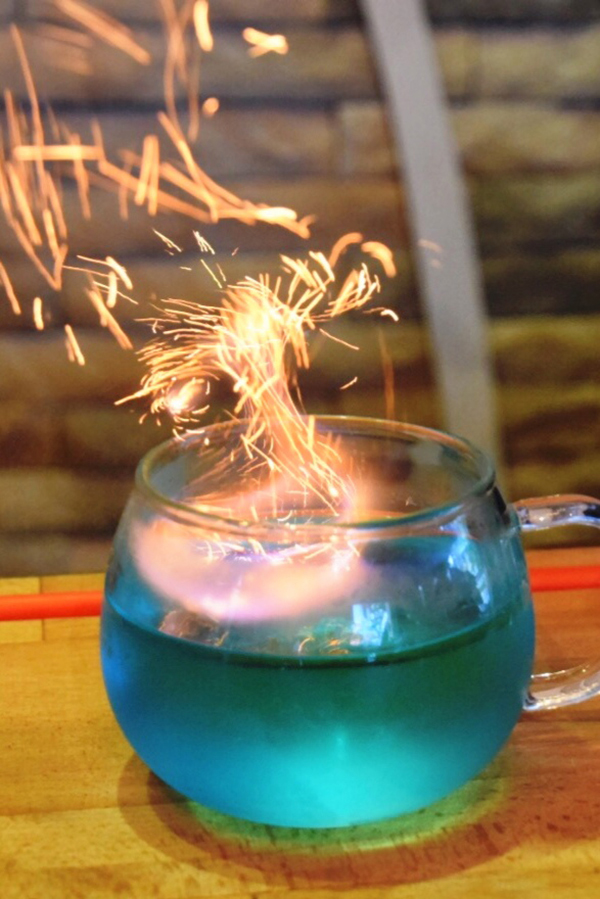 It was set alight with actual flames at our table. I was so jealous but becasue it had alcohol in it I wasn’t even allowed a taste. No fair. But the wizard who served it cheered me up by letting me make the flames explode with some special magic powder. Mum says it was just cinnamon… she’s such a spoil sport. 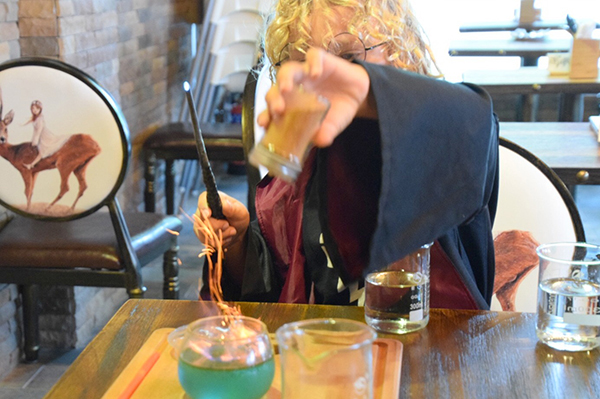 The other food isn’t all that wizardy I have to say, but there are definitely hints of Hogwarts’ British setting. The menu was packed with stuff like Spam Chips, which were served in a little cauldron. I’ve never eaten Spam before but my dad, who is from England, loves the stuff. He said they reminded him of his childhood and gobbled them up. Thank goodness ‘cos one little bite was enough for me. I reckon Spam tastes like it was conjured up by Voldemort. 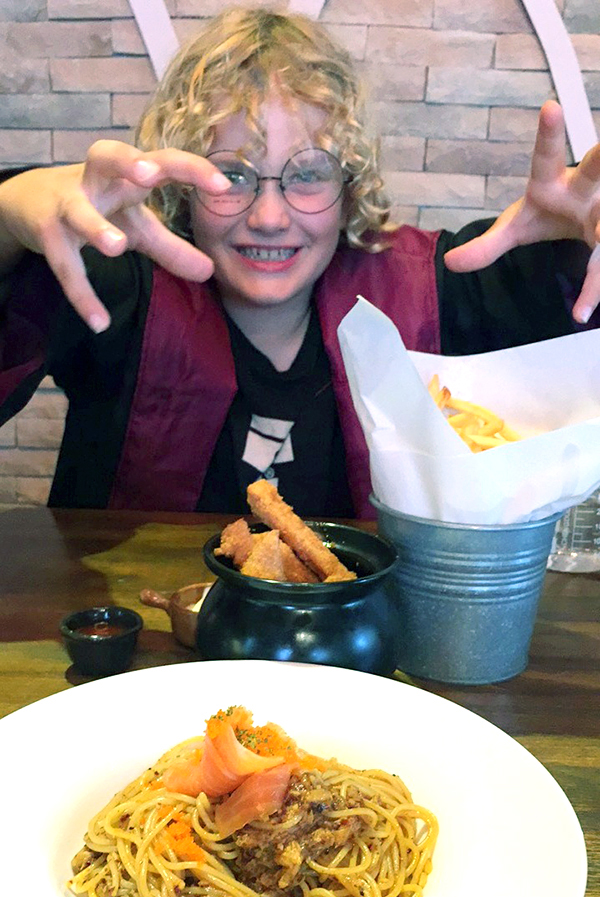 The truffle fries on the other hand were right up my “Diagon” alley and I scoffed the lot. The other dishes were really nice too and the serves were big. I especially liked the crabmeat spaghetti (agilo olio topped with smoked salmon and flying fish roe).

Dessert is where the chefs really put their magic wands to work. Ours were epic. The Bloodberry was very Mastercheffy. It had two chocolate shells filled with parfait and mousse (topped with berry foam, a chocolate wand and popping honey caviar). 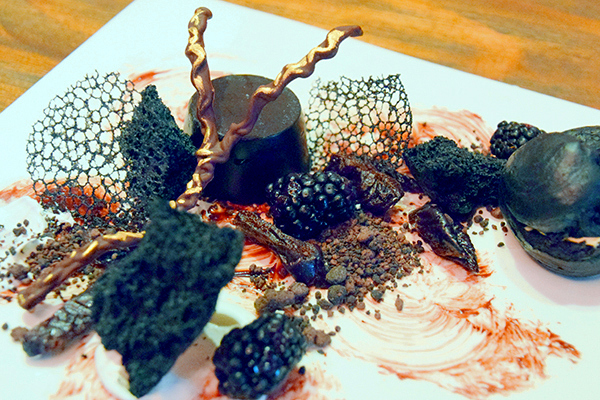 The Black Magic was my favourite. There was black sesame panacotta, black sponge and all kinds of other strange black treats on the plate. But it was so, so yum and I shovelled it in until I couldn’t fit any more into my mouth.

I admit it wasn’t my best look. 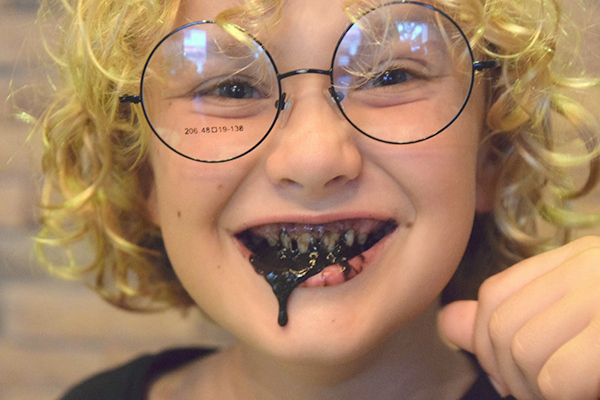 While it wasn’t the most exotic meal I ate in Singapore, it was certainly one of the funnest and we all laughed so hard over dress ups and dinner that our faces hurt.

Reviewed by Raffles – Aged 8
(Bracketed comments by his mama)