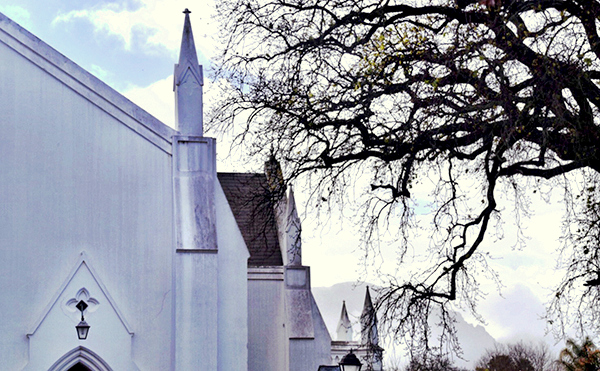 The pilgrimage to Stellensbosch, just a 45 minute drive from the sights of stunning Cape Town, is one all self-respecting foodies visiting South Africa should make. The vibrant university town in South Africa’s Western Cape province is not only home to some of South Africa’s best food and artisanal producers, but is conveniently plonked (if you’ll pardon the pun) amongst hundreds of wineries.

Indeed there are so many wineries, and wine-tastings, that I am sozzled for a good part of my visit. But I digress. Stellenbosch is the second oldest town in South Africa and one of its most beautiful. Its oak-shaded streets and Cape Dutch architecture are just as dazzling as the Helderberg, Stellenbosch Mountain, Jonkershoek Valley and Simonsberg mountains that surround it. Which is no mean feat, given their omnipresent beauty. 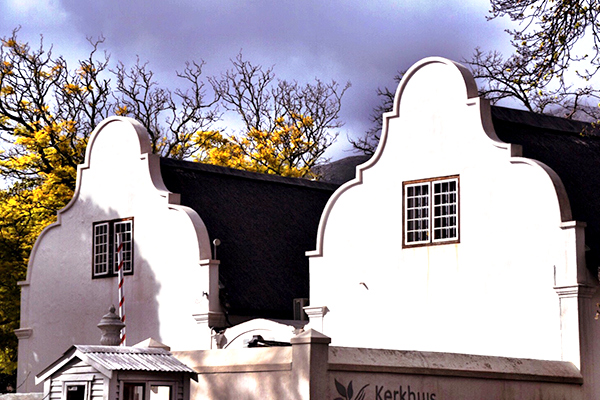 It’s a moody morning weather wise, one minute blue, the next grey and we have only a short time in town. But there is much to see,eat and, as it turns out, drink so we enlist the help of the delightful Hanli of Bites and Sites to help us find the best historical and culinary delights on a walking tour of the streets of Stellenbosch. 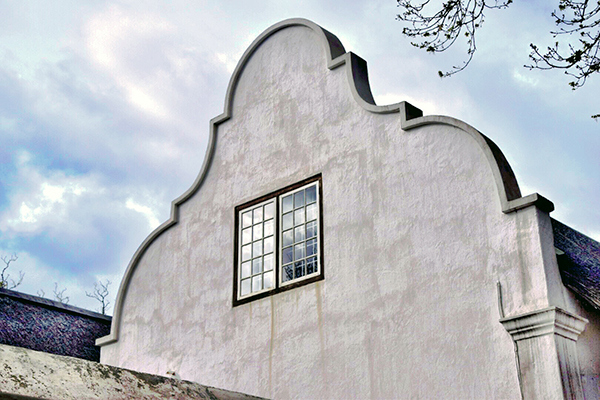 Established in 1679 by the Dutch Governor of the Cape Colony, Simon van der Stel the town, which he modestly named after himself (Stellenbosch means Stel’s Bush), Stellenbosch was further settled in the 1690’s by Huguenot refugees fleeing persecution in France. With them, they brought winemaking skills and grapes that were planted in the areas fertile valleys. And one of the world’s great wine regions was born. 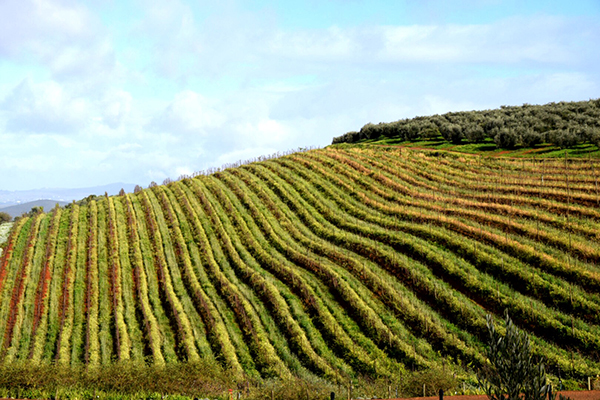 We start our walking tour at the neo-Gothic Dutch Reformed Mother Church in Drostdy Street, just a few hundred metres from the local tourism information centre. A portion of the building was part of the original Stellenbosch cruciform church and dates back to 1719. The building as it stands now, was completed in 1862 and is as austere as it beautiful in the moody morning light. 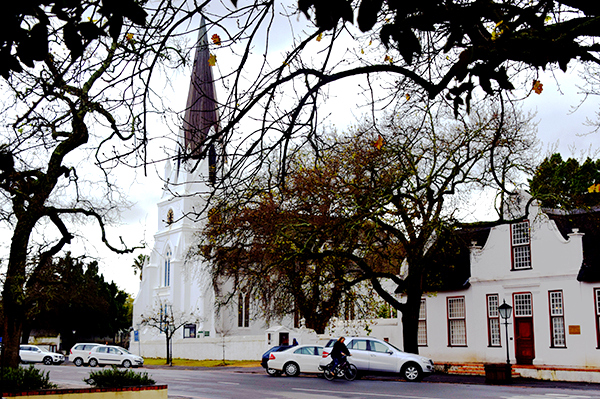 We hear how the town was virtually razed in 1710 when a great fire, the first of three, broke out and quickly spread through the town leaving only three buildings standing. One of those was Schreudeurhuis, which today forms part of the Stellenbosch Museum. The oldest restored and documented town house in South Africa, it offers a fascinating look into Stellenbosch’s past.

Inside, strings of herbs and salted fish hang from the rafters while outside a small garden is filled with local plants and vegetables, just as it would have been 300 years ago. 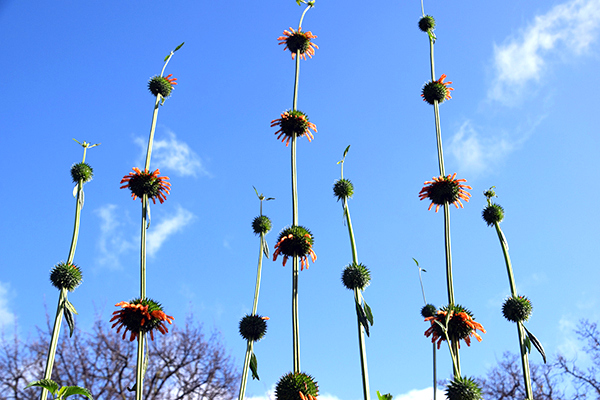 We walk along picturesque streets, past colourful stores packed to overflowing with bric-a-brac, fashion, arts, craft and a South African Noah’s Ark of animal carvings. 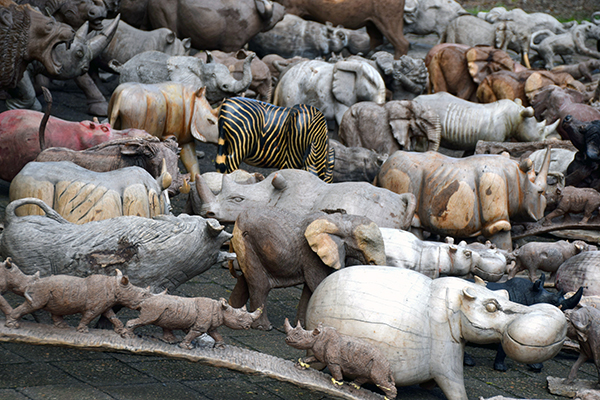 Along the way we spy several intriguing art installations including what, at a glance, appears to be a rusty metal map. But as you move closer, the pieces of metal align transform into an image of the great Nelson Mandela and the map itself turn out to one of places significant to the great man. A long white strip leads to the monument wall and is inscribed with Mandela’s words, “Never, never and never again shall it be that this beautiful land will again experience the oppression of one by another.” 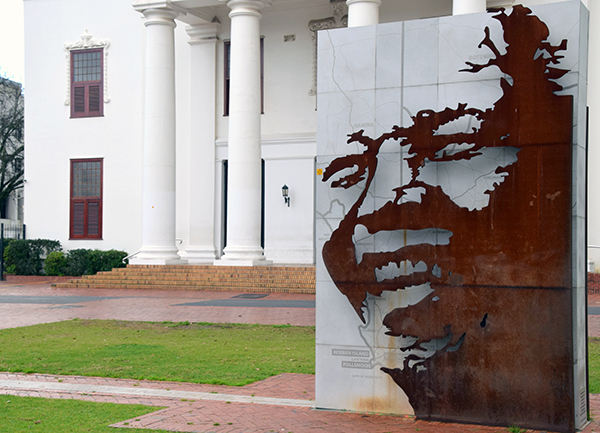 On the utterly gorgeous Dorp Street and one of the longest rows of old buildings surviving in any major town in southern Africa. We ooh and aah over the many pretty historic home and eye of the gorgeous boutique shops and cafes. 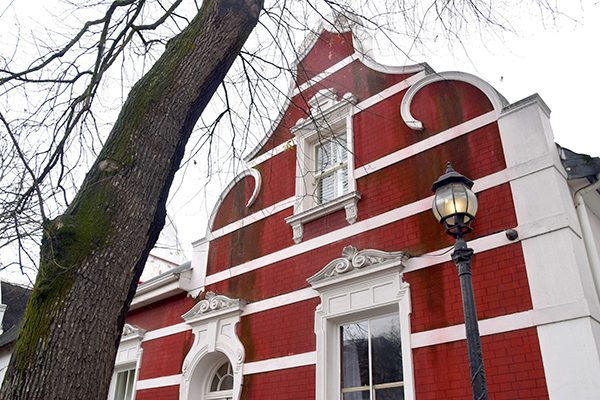 We make a stop at the rather photogenic Verbatim Bookstore, which Hanli explains was originally a funeral parlour, pointing out the custom-made windows that were used for the movement of coffins. 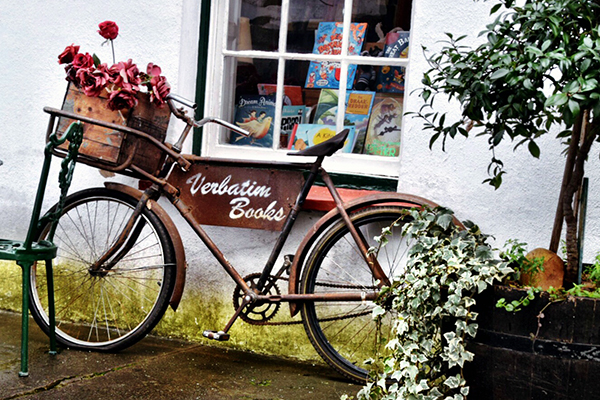 Despite its cheery appearance, it is said that there may be a few reminders of its past still putting the “boo” into books, as they have been known to mysteriously throw themselves off the shelves.

Despite its long history, and literature loving ghosts, the town has a youthful and creative vibe, thanks in no small part to the 29,000 students enrolled at Stellenbosch University. One of Sooth Africa’s oldest and most important educational institutions, it is famous for producing many a former prime minister, activists, artists, Olympians… and the team of medical specialists who performed the first successful penis transplant.

I digress. Again. Nowhere is Stellenbosch’s youthful vibe more evident than at Schoon De Companje, the brainchild of Fritz Schoon, an artisan baker, and his wife Chanelle. 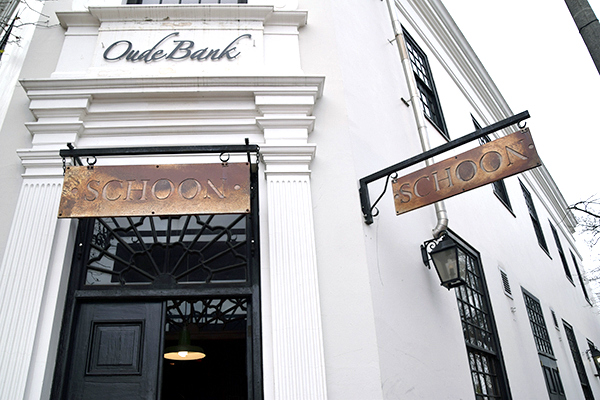 A sustainable, ethical, gourmet collaboration of artists and artisans, it’s a bakery, a coffee roaster, a produce store, a wine shop and ice cream parlour in one. 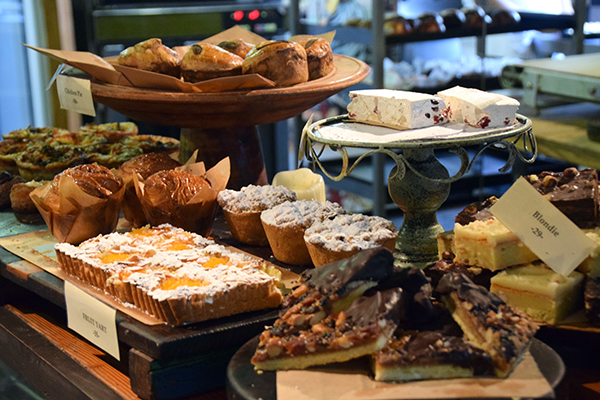 The restaurant itself is positively heaving with the lovely folk of Stellenbosch during our morning visit, and the kitchen churns out beautiful dishes created from locally sourced produce with a wink and smile. 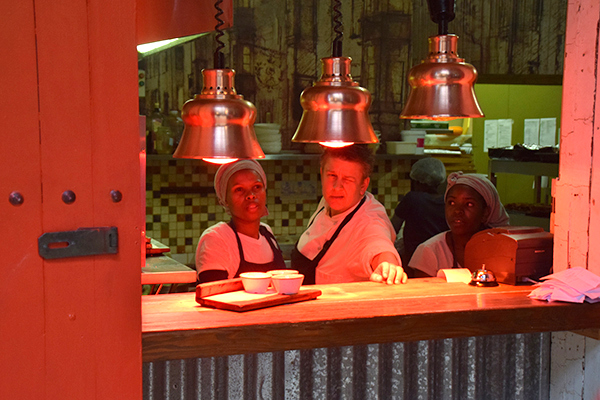 Hanli stocks up on some of Fritz’ incredible bread to nibble at our next stop, the Brampton Wine Studio, where she has organised a wine tasting.

Something I notice about tastings in South Africa is that rather than the splash of wine one might expect, the tasting glasses are generously filled. So Stellenbosch only has itself to blame for the vagueness of the rest of my story. 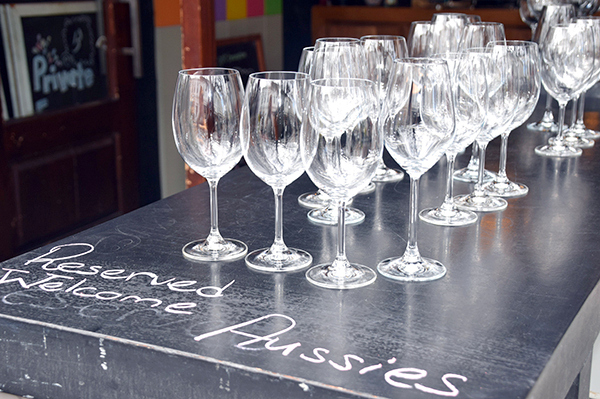 One thing I am not in any way vague about is how damned good the wine actually is. In fact, Stellenbosch has the most wine awards per capita/wine of any region in South Africa. And the price to quality ratio is incredible. Seriously, the four wines we taste at Brampton Wine Studio are fantastic and each rocks a price per bottle less than what I’d expect to pay for a single glass of crappy house wine in Australia. 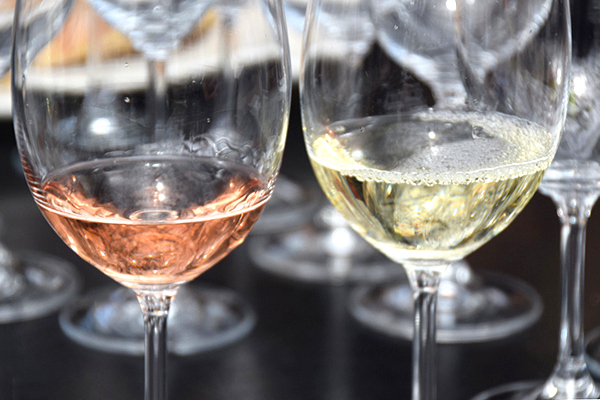 The Pinotage and rosé  are particular standouts to this lover of all things rouge tinted, and I accidentally drink a second glass of each.

Then it’s on to lunch at Oude Werf. Ok, so that single sentence is a blatant admission that I’ve already knocked off six glasses of wine before midday. But I swear it’s not my fault. Stellenbosch made me do it!

Set on the site of the country’s earliest church, Oude Werf is beautiful boutique property and South Africa’s oldest continuously operating hotel. Its past shines through in its period-inspired furnishing. There are even a few remnants dating back to its churchyard history, including the original cobblestone foundations and an unused brick coffin that are visible, behind glass, down a stairway under the restaurant’s kitchen. Yet despite the relics, the hotel is still delightfully modern with cheekily chic touches throughout and elegant, beautifully detailed rooms. 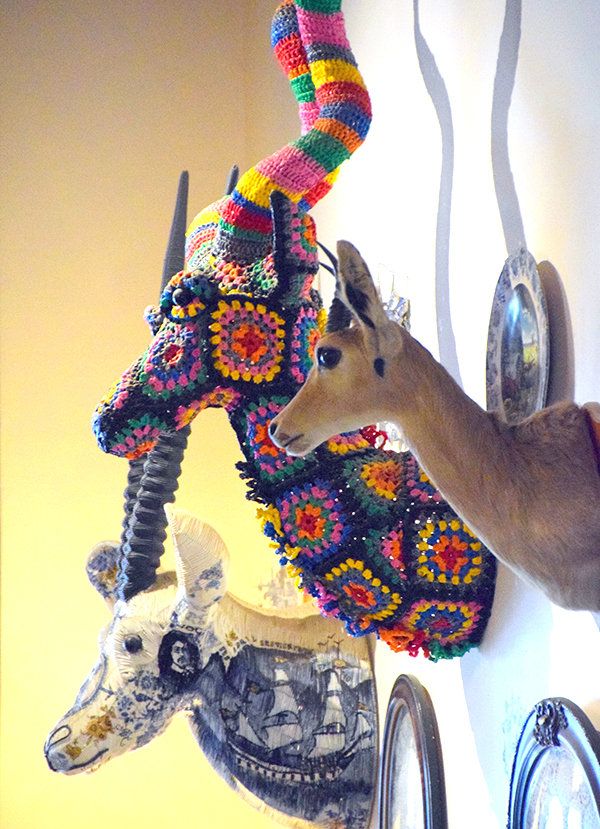 But we are not here to stay. We are here to eat. And in the shady courtyard, eat we do. We devour delectable smoked snoek-cakes (fishcakes made from a long, thin species of snake mackerel that is popular in the Cape). 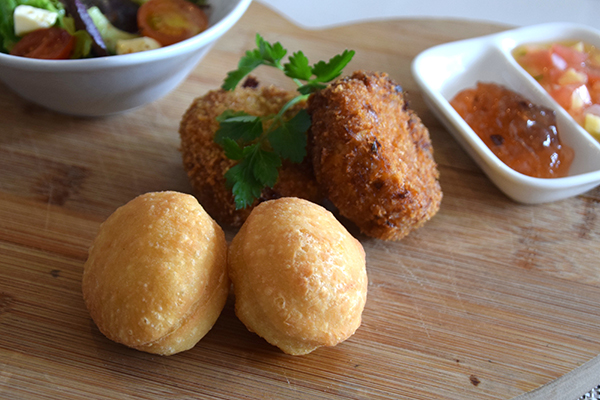 Followed by a tasting plate of Cape classics including Bobotie, Chicken Pie and Oxtail served with yellow rice and citrus-infused sweet potato. 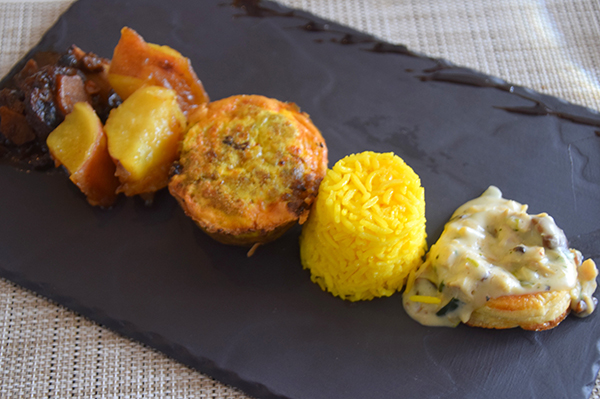 There may also been cake. And another glass of wine. Or two. All right, three!

But who’s counting, or even capable of it, at this stage?

For tips on exploring Stellenbosch with kids visit here.

South Africa’s Western Cape – Need to know before you go

When to visit
The Western Cape has great weather and is a year-round destination.
Language
English is widely spoken in Cape Town, though there are 11 official languages spoken in South Africa – most commonly  Zulu, Xhosa, and Afrikaans.
Currency
The Rand (R)
Power
Voltage is 230V and 50Hz. Power outlets are round three pin sockets.
Visa & Passport Requirements
A South African tourist visa is not required for citizens of Australia for a stay up to 90 days.  South Africa requires all children entering or leaving the country carry a certified birth certificate and parental consent affidavits if they are travelling with only one parent. All visitors require a passport that is valid for at least six (6) months.
Health
The Western Cape is free from malaria and safe for travellers of all age. While there are no essential vaccinations for travellers to South Africa at the time of publication, we advise visiting your family GP at least six weeks before travel for up to date advice on the latest recommendations and necessary immunisations.
Crime
In the Cape, crime is high, but 95% of serious crime occurs in the communities of Cape Town’s Cape Flats area, where it is not advised to travel. Pick pockets can be an issue and it’s best to travel with a guide and always keep cash and valuables out of sight. It is not recommended to catch public transport or walk after dark.

Disclosure: Mama Eats World’s morning exploring the streets of Stellenbosch was kindly assisted by Stellenbosch Tourism and Information Bureau and Bites and Sites but, as always, all opinions and liver damage are my own.

13 Comments on Bites and sites on the streets of Stellenbosch