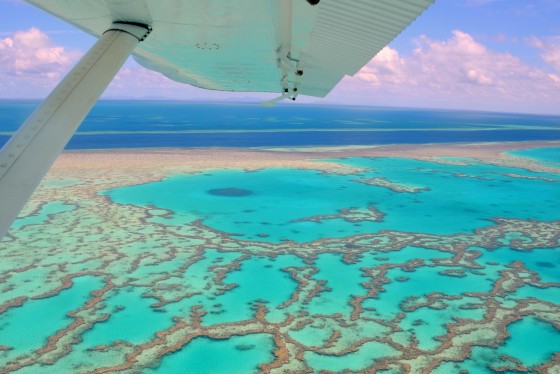 I’m going to let you all in on a little secret. I am afraid of flying! Well I’m not so much afraid of flying as I am of crashing, but let’s not split hairs. Either way it proves a little awkward given I make my living out of travel and spend quite a bit time on airplanes. In the sky.

You’d think with a few hundred flights under my belt that I’d be able to fly one of things myself by now. But no. I still soil myself! Add a touch of claustrophobia to the equation and hilarity ensues.

The in-flight safety demonstration never helps. The seat belt? Farcical! My kid has a better restraint in her pram and we’re lucky if that ever does over 2km per hour, let alone 900!  And the life jacket with its light and whistle, what’s that for… entertaining the sharks?  You’re floating in the middle of the ocean hundreds of kilometres from land or the nearest passing ship and you seriously expect the captain of another non-crashed plane flying 30,000 feet above you to say to his co-pilot, “Did you just hear someone whistle?”

If you should ever find yourself sitting next to me on a flight you’ll be pleased to know that I’m not outwardly hysterical, more an introspective quivering mess. If you notice my eyes nervously darting about looking for the nearest exit or my white knuckles as I’m rabidly checking the cabin staff for signs of a nervous sweat, I do have to ask a small favour! Please don’t start with all that “statistically, you’re more likely to have a car accident” bollocks because I’ll raise your rational argument with an irrational smack in the head! I get the statistics.

But planes do crash and when they do it’s not likely to end with a wee ding that you can get your cousin’s mate to bodge up in exchange for a case of cans, is it? Let’s be honest, it’s going to be less whoops and more flaming ball of twisted metal. There’s a reason you don’t see AAMI insuring freaking jumbos!

Regardless, with the assistance of a litre or two of Rescue Remedy and a lot of rocking back and forward quietly chanting “we’re going to die, were going to die, were going to die” with all the meditational resolve of a Buddhist monk, I get there. I may be a card-carrying flight phobic but I haven’t yet allowed that fear to keep me from flitting around the world several times over and, thus far, I can happily say I’ve made the same amount of landings as I have take-offs. Which is kind of  important. 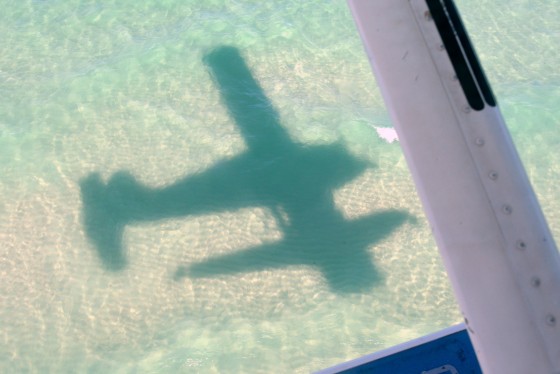 But I’m only talking about the big ones. Small planes are different. Just writing about those little bastards is enough for me to call for the smelling salts. And I confess that I have said no when confronted with the reality of having to hit the sky in one of those wee Fockers. Instead of the calm but internally gelatinous individual you might be lucky enough to encounter on a 747, show me a Cessna and I’ll show you a freaking idiot.

Given that pretty much takes the “joy” out of a joy flight for everyone involved, the Eats Worlds have generally avoided those on holidays… until now.

We’re in the Whitsundays Islands with the kids and there really is no better way to see the breathtaking Great Barrier Reef than with a bird’s eye perspective and, as I’m here mostly for work, we’ve been invited by the lovely folk from Air Whitsunday Seaplanes to take to the skies. So I face two dilemmas – pissing off a client and Raffles, who is so excited at the prospect he’s tap-dancing on the tarmac. Gulp!

Ergo I find myself swallowing a teaspoon or two of cement to harden up for a half day Whitsunday joy flight. And not on just any old little plane, no. This one is suffering from an identity crisis and thinks it’s a boat!

On arrival, we’re handed stinger suits. “What now? Are they going to release a swarm of freaking bees mid-flight?” I scream at the long-suffering Mr Eats World, who points out they are for the leisurely reef swimming part of our afternoon before suggesting I seem a tad jumpy!

After I’m peeled off the tarmac and forcibly stuffed into the aircraft, we’re briefed, seated and given headsets to hear our captain above the noise of the teensy tiny plane. 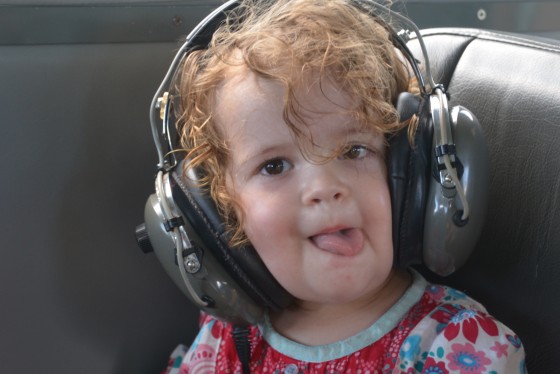 Soon enough we’re in the air and I’m turning a fetching shade of blue from holding my breath. I look down at the water below us and the islands scattered to our left and right and then the most amazing thing happens! 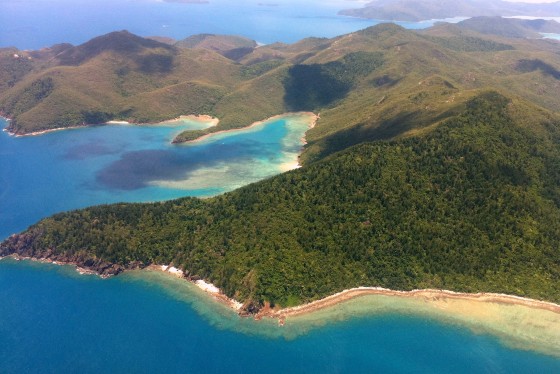 I breathe out! And I realise that I am not afraid! In fact, with the fresh air flowing through the small plane and a head-setted Raffles beaming at me and signing that he loves me in encouragement (my little Wingman is so sweet I could eat him), I’m positively euphoric. Bugger me! 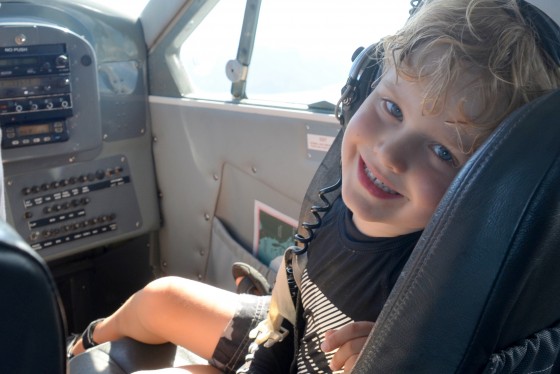 The Great Barrier Reef is the world’s largest living structure, stretching over 2000 kilometres and one of the seven natural wonders of the world. 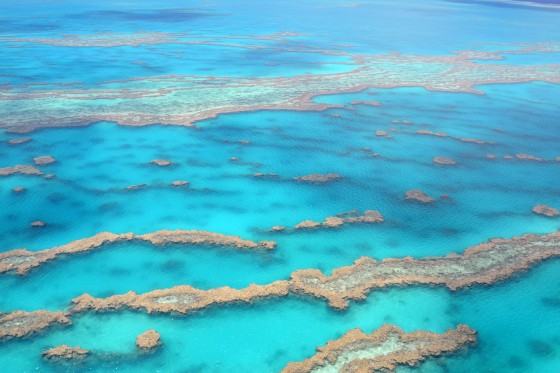 It is beautiful beyond description, the deep blue of the seas, the green of the islands and the fusion of vivid blues and greens as we fly over the reef itself are nothing short of breathtaking. 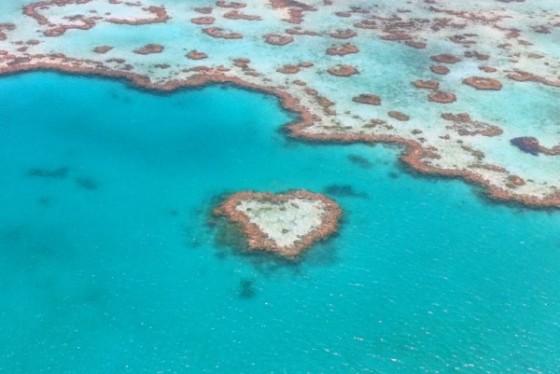 As we descend over the ridiculously pretty sight of Heart Reef, which can only be viewed from the sky, in readiness to land, I once again find myself breathless, only this time in a good way! 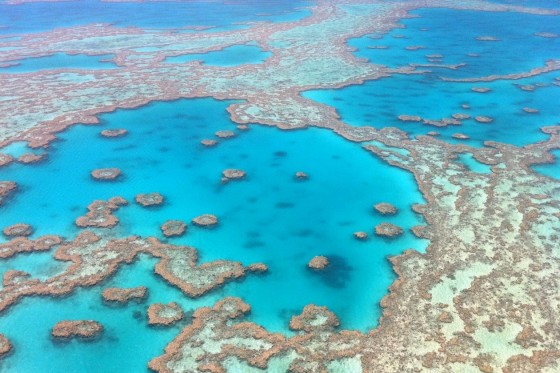 The plane lands in a spray of water and, after taxiing to a private submersible boat, we disembark. 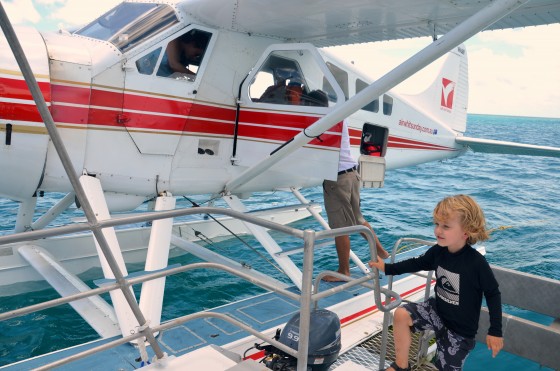 After a quick refreshment we suit up in our très flattering stinger suits ready to submerge ourselves into the beautiful blue. 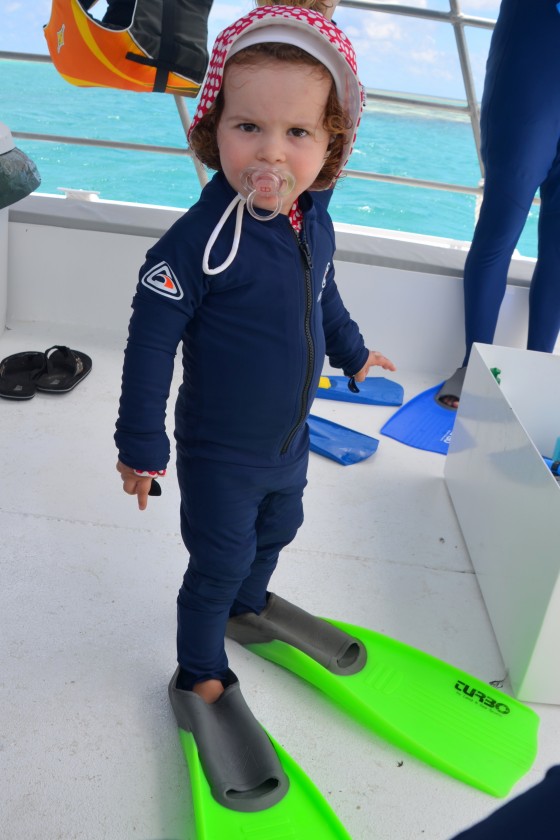 Sugarpuff is too young for the complexities of snorkelling so she and I splash about with a noodle by the boat as the boys head off amongst the coral with their new “crazy coloured fishy friends”. 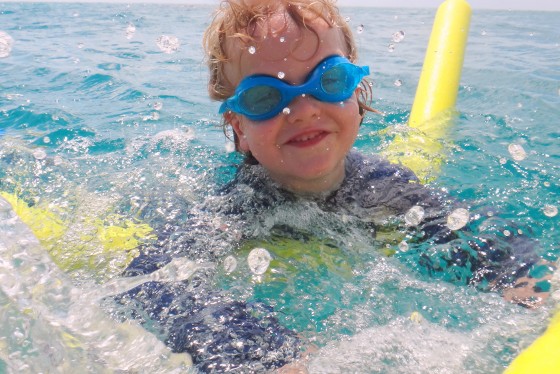 With Raffles promoted to a very chuffed co-pilot on the return trip and me a newly minted non-chicken shit, we head back to Airlie Beach over the sparkling expanse of Whitehaven Beach. 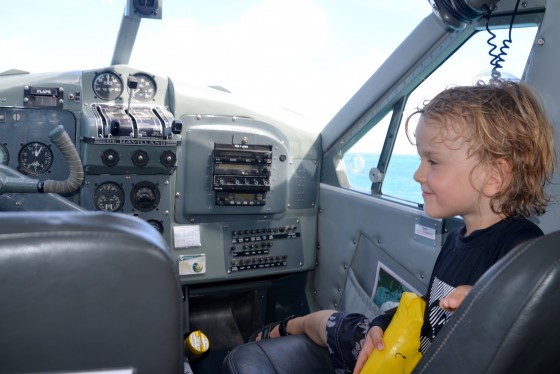 There are simply no words. 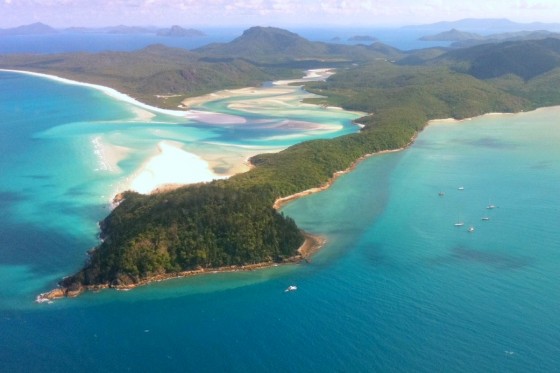 Back on terra firma I can’t believe that I nearly talked myself out of this once-in-a-lifetime experience and thank my lucky stars I gave in to the pleas of my fearless fly baby! 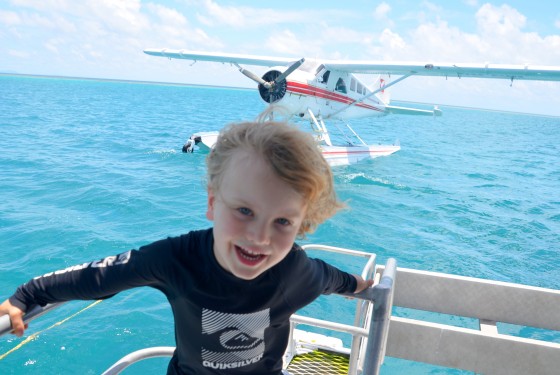