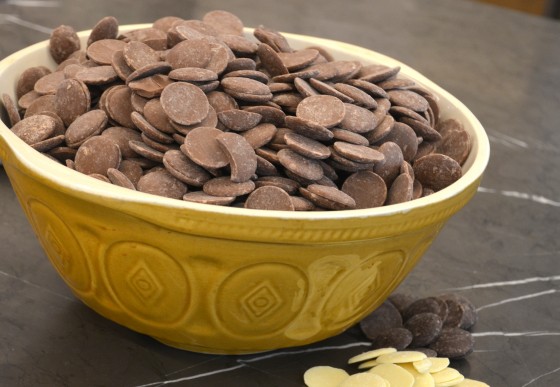 It’s hardly news to fans of the brown stuff that chocolate was an invention of the Olmecs, Mayans and The Aztecs. Nor that the beans from the cacao tree were fermented, roasted, and ground into an oily and bitter paste and combined with spices, water, chilli and cornmeal to make a beverage offered to royalty, rulers and priests. Or even that it was a treasure so revered it was proffered to their Gods in sacred ceremonies. But that’s just part of the story…

You see, scientists have recently discovered that cacao‘s origins are about 500 years older than first thought (give or take a day or two) and that the original incarnation of the foamy beverage was in fact a beer-like brew and those canny old Central Americans were probably just hooked on getting hammered on some ye old style choccie flavoured VB.

And I can’t really say I blame them. Hell no! In fact, let me start again.

Hi, my name is Ms Eats World and I am a chocoholic. It’s been about five minutes since my last drink! If I’m being totally honest, it’s more like 30 seconds. Okay, Okay! I’m actually typing this sitting in my local chocolate shop with a steaming hot mug of hand tempered, hand flaked, black pepper infused chocolate. 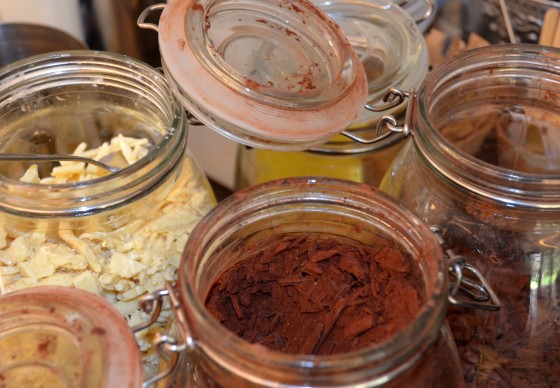 I am quite literally surrounded by surfaces heaving with chilli chocolate figs, delicate chocolates adorned with edible artworks, cocoa dusted chocolate almonds and chunks of broken chocolate sprinkled with fruits, peppers and spices, each and every one calling me with their siren song. 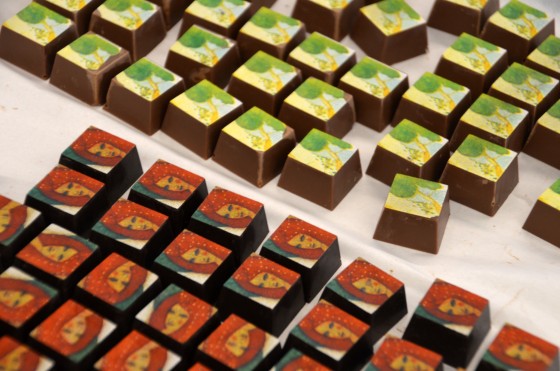 And don’t even get me started on the beckoning bars of dark chocolate speckled with pine nuts, caramel and sea salt. Actually do, because I’m going to eat some as soon as I finish typing this sentence.

It is this shop, Coco Chocolate, that is the real root of my addiction! So much so that Mr Eats World refers to it as “The Crack Shop”. In fairness, he may actually have a point because I do visit so frequently that I’m a little surprised that the owner, the lovely Rebecca, hasn’t taken out a restraining order on me. Rebecca is the real deal, a traditional chocolatier who studied at the Valrhona Chocolate School in France. And it is her sublime chocolate that I am addicted to.

In truth, I can actually take or leave most other chocolate, just not the ambrosial stuff of Coco. What most people take for chocolate is a mere trifle of sugar, artificial flavour and milk powder compared to the sweet, sweet alchemy of truly good chocolate. Once you’ve tried it there’s no turning back. And, in my ever so humble opinion, Coco Chocolate, in all its organic, ethical, hand-made glory is the best in Sydney.

Given his DNA, it’s no great surprise that Raffles is also a fan of all things chocolate-hued.

I would like at this juncture to state that (complete hypocrite that I am) neither of my children were allowed to dabble in the brown stuff until they turned two and happily munching a broad variety of healthy foods. Not just because I didn’t want to share mine with them (although that may have been part of it) but in the interest of them developing a healthy palate for all food.

Now, back to the story! Naturally, when I asked Raffles if he’d like to attend Coco’s Sydney Chocolate School, he answered “No thanks mama, I’d rather just stay at home with a plate of steamed broccoli and watch a documentary on Thermodynamics!”

In a parallel universe, that is! Seriously, what five-year old is going to say no to a school with no uniforms, no books and only one rule! “Eat as much chocolate as you possibly can!”

Not mine. He’s doing freakin’ cartwheels in anticipation!

So we find ourselves on a chilly Tuesday morning at Mosman entering what has to be the prettiest classroom I’ve ever seen, bubbling with anticipation at learning the art of making chocolate. 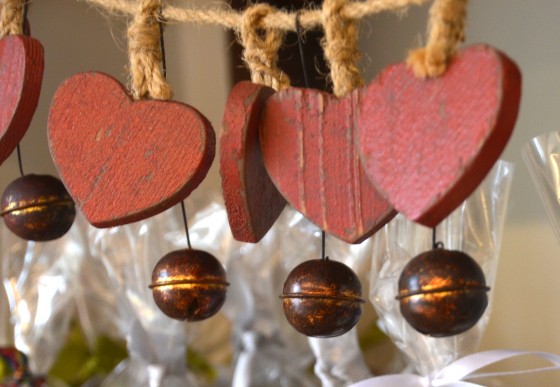 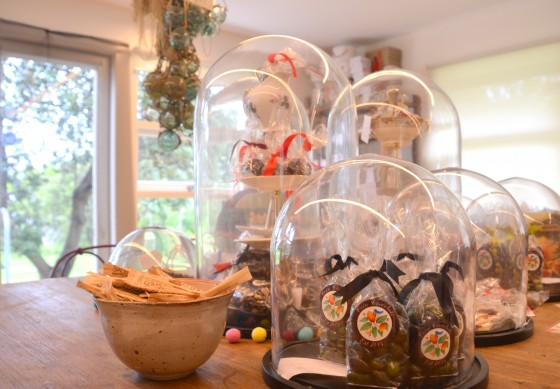 Raffles, it must be said, proves an eager student! No great shock given the topic. He listens attentively as my beloved chocolate dealer, I mean chocolatier, Philippa, gathers the kids around the table and begins the lesson by handing out samples to taste test! 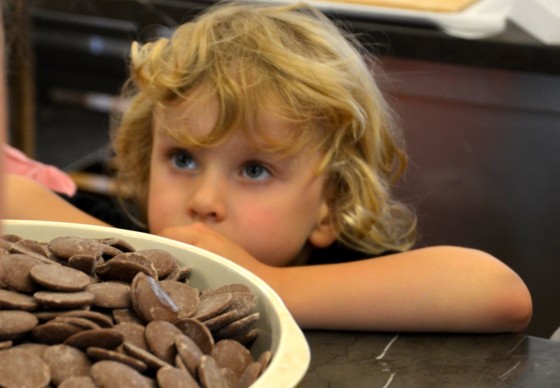 I doubt I’ve ever seen a more attentive or devoted student than my little chocolate swat! 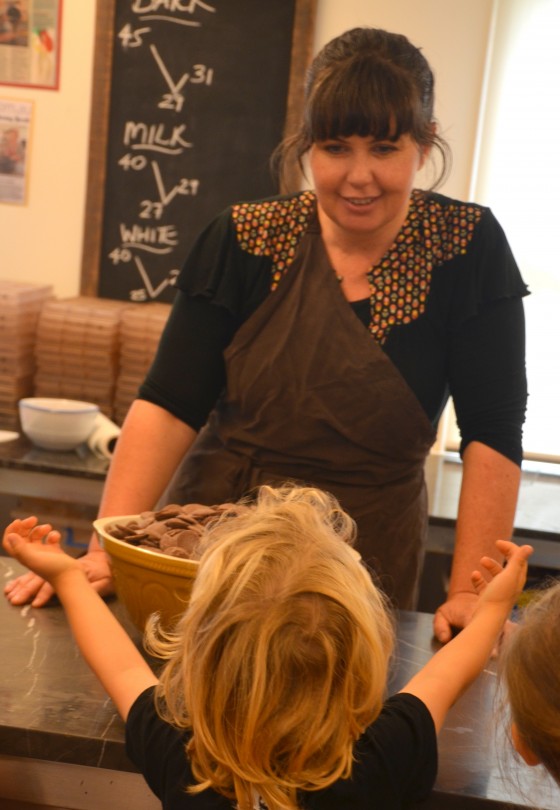 Philippa shares a little history of cacao and the kids get a taste a of it in its hard and bitter original bean form (which results in a fair few shocked faces and visits to the nearest bin) before imparting a few scientific facts about making chocolate. Then begins the hand tempering process. Tempering couverture chocolate is what gives the finished product its appealing gloss and distinctive snap!

Using a microwave Philippa heats several kilograms of chocolate in short increments, stirring thoroughly between bursts, until (tested with a cool laser gun thermometer the kids are all quite enamored with) it reaches the right temperature!. Once it is spot on, she asks the kids to take a step back and pours a river of glossy chocolate on to a marble slab. The kids are enthralled but it takes all my strength for me not to dive onto the table and body surf through the molten mass! 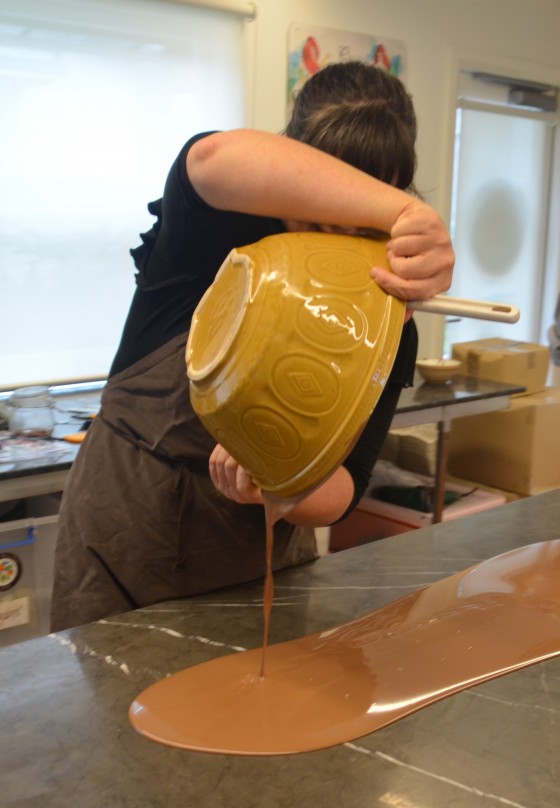 Using a special chocolate wide scraper she spreads the chocolate in a figure eight pattern, before inviting the excited kids to join in! It’s at about this point that Raffles decrees he’s died and gone to choccie heaven! 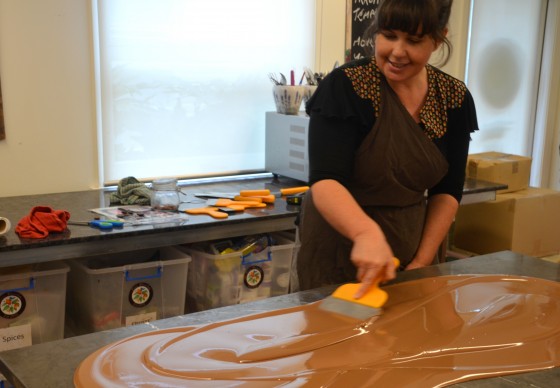 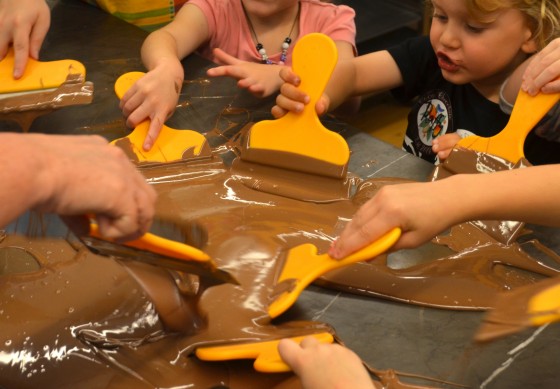 They kids enthusiastically swirl the molten puddle with their scrapers until the desired temperature is achieved. It’s then scooped back into the bowl for Philippa to work her magic with the microwave and raise the temperature by two very important degrees. 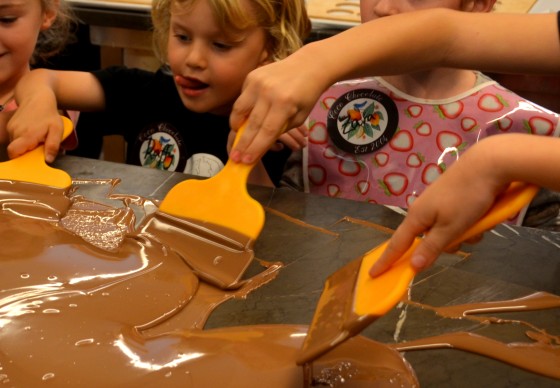 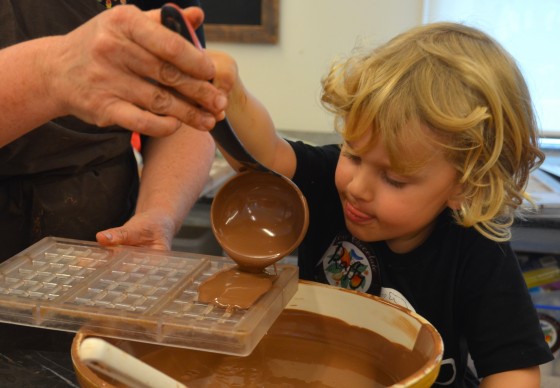 Raffles is determined to create the perfect bar and is thrilled with the shiny end result! 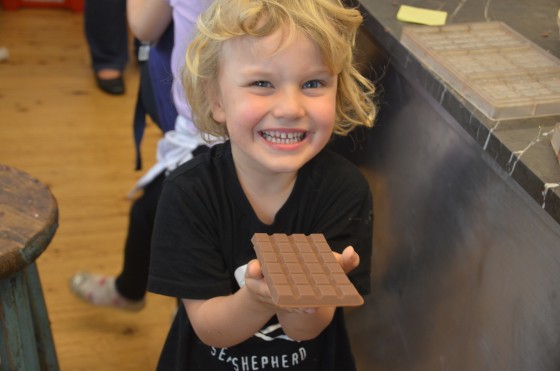 Bars finished, the kids are asked to sprinkle freeze-dried raspberries into another special poly carbonate mold. The raspberries are dried so that there is no moisture in them as moisture is the mortal enemy of chocolate! The molds are then filled to the top with chocolate to create magical raspberry stars. 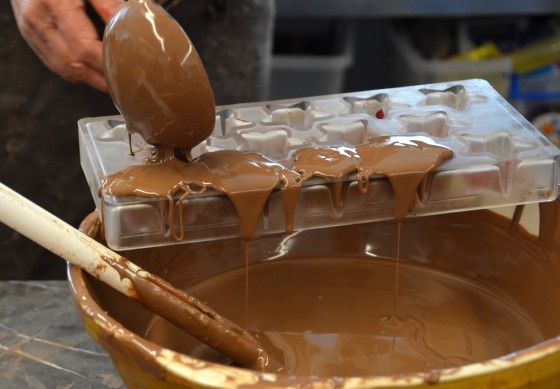 The result is these delectably dazzling confections that are as delicious as they are pretty. 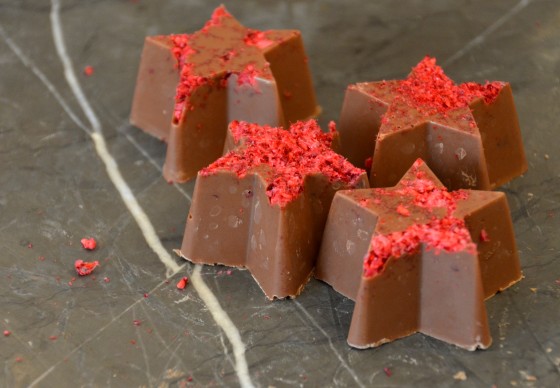 Philippa pours the chocolate into the special rubber chocolate mold and with a flick of the wrist spreads it into place with her scraping tool. 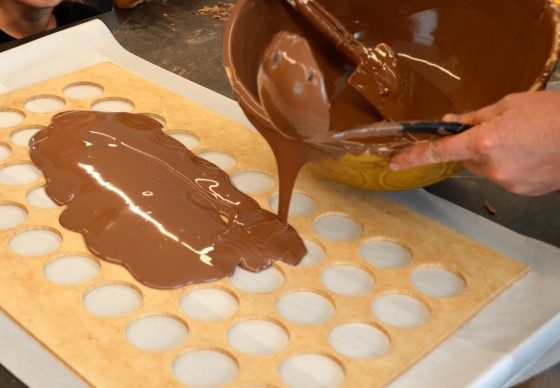 Being so fine the freckles set quickly so the kids have to work fast to get the hundred and thousands stuck in place. It’s a job Raffles takes very seriously indeed. 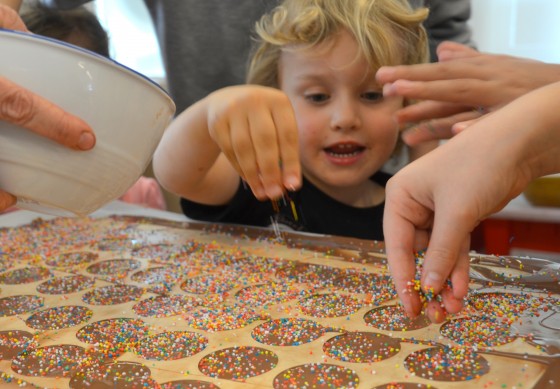 The finished freckles are nothing short of spectacular and Raffles chest is puffed up with chocolaty pride at his handy work. 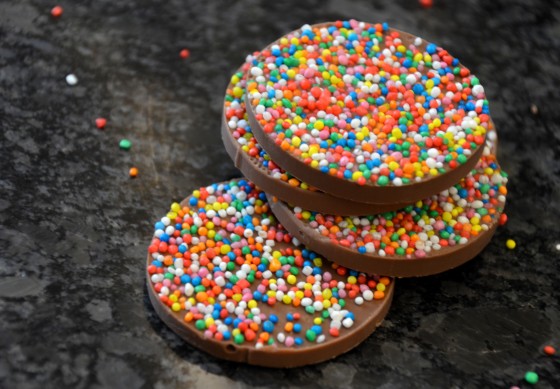 For all the glamour of stars and bars and freckles the biggest thrill for my little chocolatier is when the work is done and it’s time to cleanup. 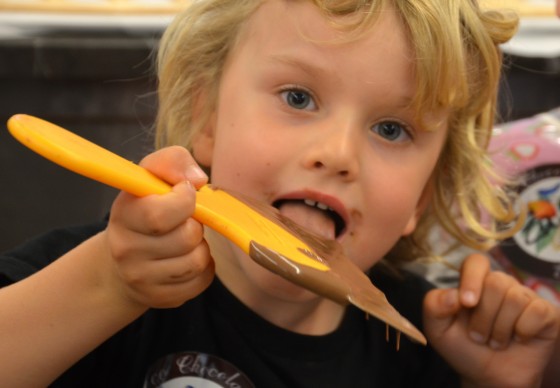 I mean, hands up who wouldn’t want the job of licking this particular bowl clean!? 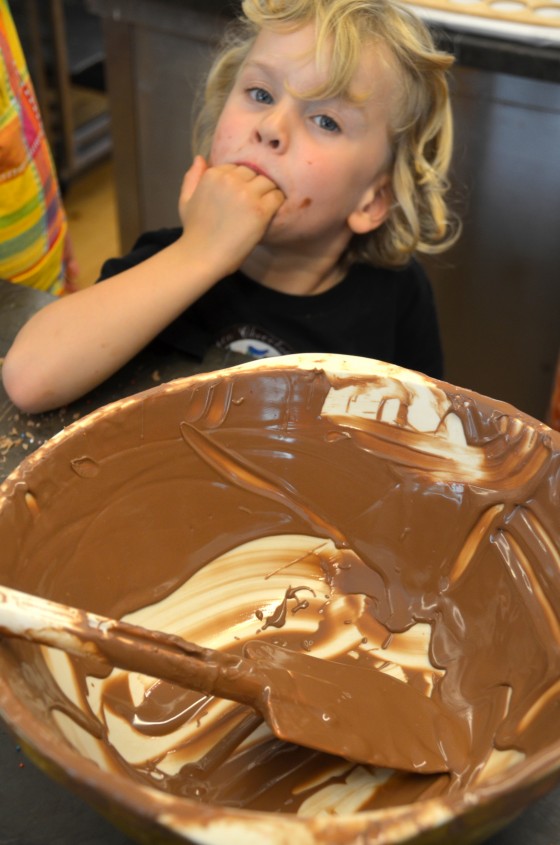 At the end of the class all the kids get a goody bag packed full of all the tasty treats they’ve created to take home and be hidden from their mother (well, at least this mother) but teacher’s pet Raffles also steals a cuddle from the beautiful Philippa. 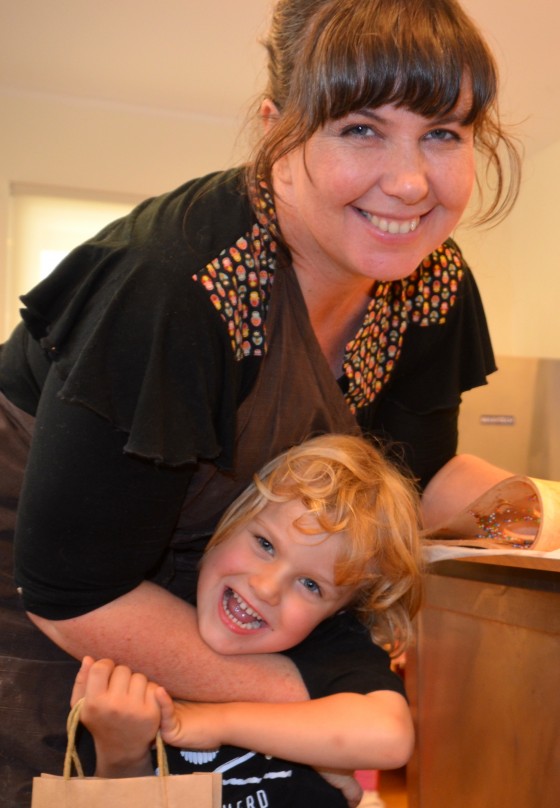 Given that he’s consumed about 3,500 kilograms of chocolate during the hour and a half lesson, the Sydney Chocolate School’s stunning harbourside location and expansive grounds also offer the added bonus of being the perfect place for a small boy hopped up on the world’s finest cacao to burn off all that chocolate induced energy. 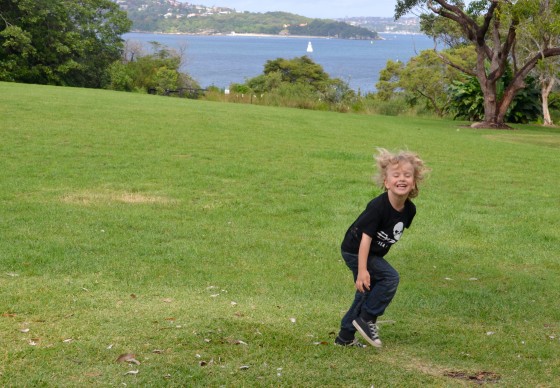 19 Comments on Sydney school of choc