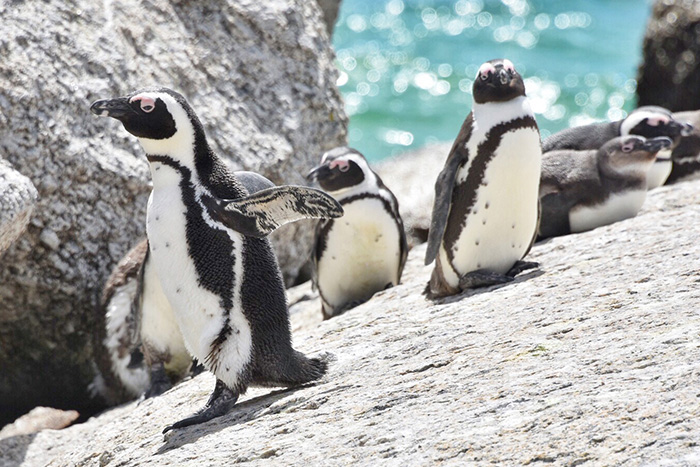 Think South Africa and you immediately think wildlife, generally of the large, roaring and mammalian variety. But beyond it’s Big Five – the lion, leopard, rhinoceros, elephant, and Cape buffalo – and their equally hefty friends the giraffe, hippo and zebra, South Africa is home to another adorable critter that will barely reach your knees, the African Penguin – the only penguin species to breed in Africa.

Only found on the south-western coast of Africa, the charismatic cuties are known for their distinctive black and white plumage and donkey-like vocal stylings.

About the African penguin 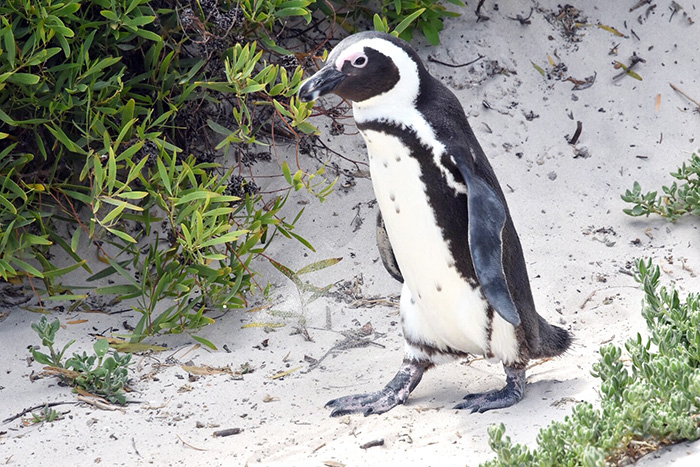 When people think of penguins they tend to visualise them on ice, but Africa’s penguins are the beach bums of the penguin world and so acclimated to warmer temperatures it would be no surprise to see one rocking boardies and a surfboard.

While they do still sport the comical gait and tuxedoed appearance of their cool climate cousins, the African Penguins also sport a dashing black stripe, black feet and a smattering of black spots on the chest that’s unique to every penguin. 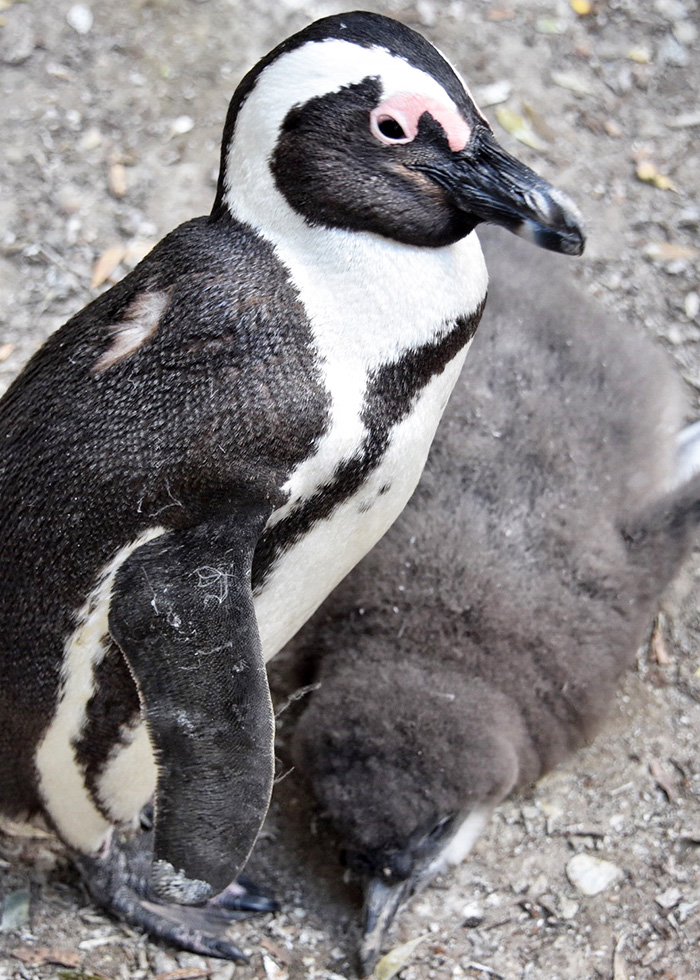 Sadly, like many of their bigger South African buddies, the feathered favourite is facing a battle for survival as the species slides towards extinction. The African penguin was shifted from vulnerable to endangered in 2010 following a rapid population crash leaving only about 21,000 breeding pairs of African penguins in the world. 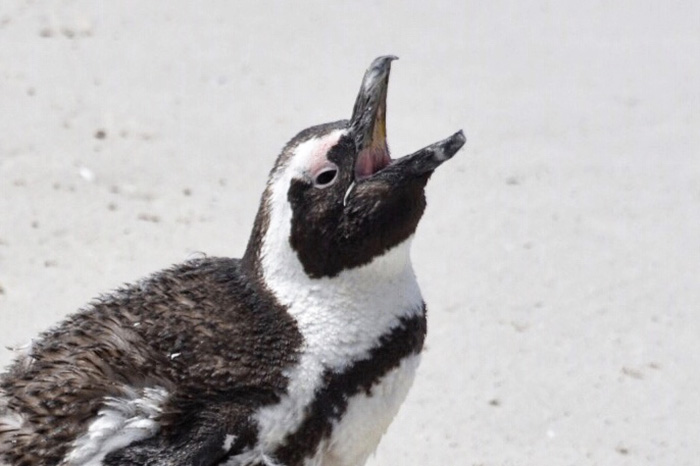 It is projected that the African penguin could become extinct within as little as 15 years as they can’t find the fish they need due to warming sea surface temperatures, over fishing, by-catch and oil pollution. Add plastic pollution to the mix and the result is the penguins ingesting what is effectively a toxic soup.

So where can you safely and ethically see the penguins in South Africa with kids? 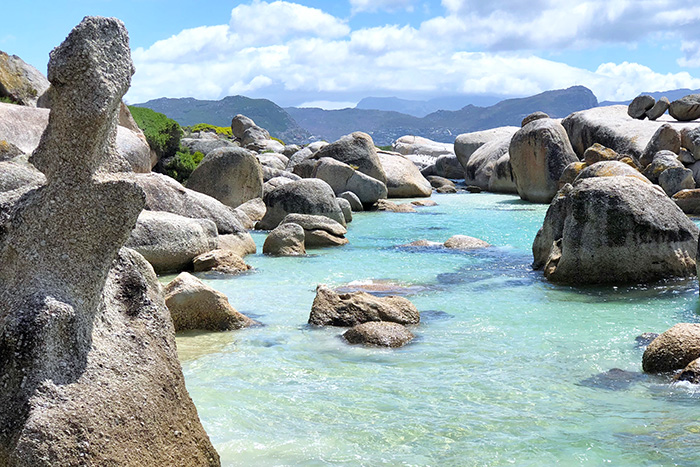 It is at pretty Boulders, a series of tiny coves and little white-sand beaches scattered with 500-million-year-old granite boulders between Simon’s Town and Cape Point, that the kids and I first get to see an African Penguin colony in wild. It is also where we discover just how much penguin poo stinks. Seriously, that stuff reeks! 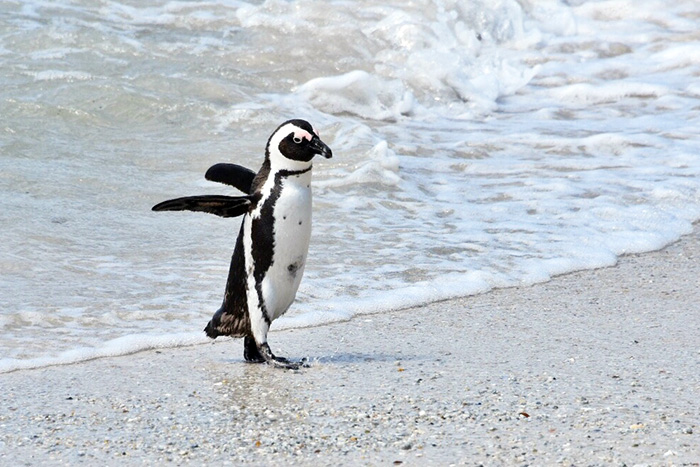 The best place to see penguins in South Africa in their natural habitat, we join the penguin party at Foxy Beach, where you can get within metres of several thousand of the braying charmers. An easy to access wheelchair-friendly wooden walkway keeps both penguins and visitors at a safe distance. You’ll need to pay a small conservation fee at the visitors centre to gain access as the colony falls under the protection of SANParks. We’re more than happy to hand over a little coin as all the funds from admissions goes toward protecting Boulder’s African Penguin colony. 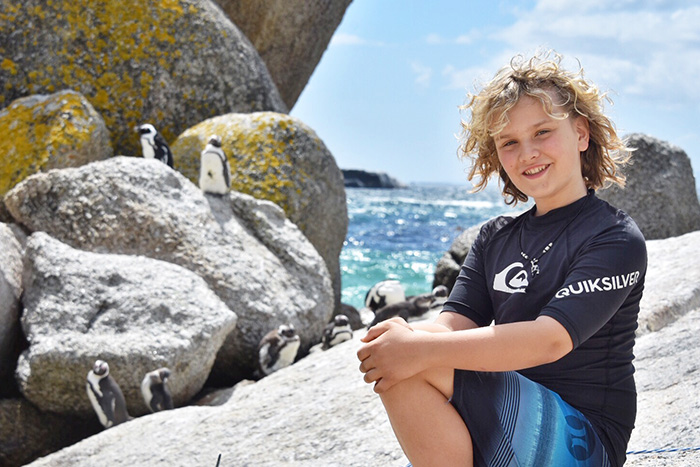 A few hundred metres further along is Boulders Beach, sometimes known as Penguin Beach, you can join the penguins in the sand and sea. Yes, that’s right you can take a dip with them in the calm, Tiffany-blue water. Protected by ancient granite boulders from wind, waves and current, the clam waters are an ideal swimming spot for littlies.

No alcohol or smoking is permitted within the reserve and Rangers patrol the beaches to ensure visitors don’t get too close to the protected penguins. 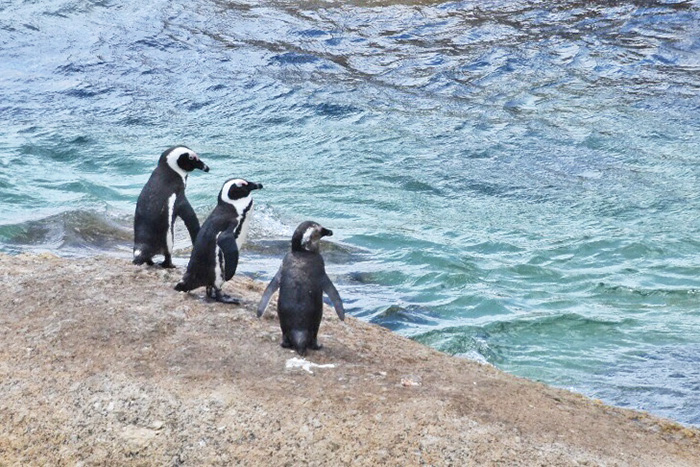 Touching them is not only a violation of conservation efforts, it is also extremely ill-advised as these feathered funsters are not as sweet as they look. They can (and will) inflict a nasty injury with their sharp beaks and can become aggressive if feeling threatened. Fair play too as this is their territory to defend. Keep a respectful distance and let the naturally inquisitive critters make the choice if they want to join you for a paddle in the shallows.

Where to stay: Tintswalo at Boulders Beach in Simon’s Town is a luxury boutique hotel that’s just a few footsteps away from one of Cape Town’s best swimming beaches and those precious penguins. 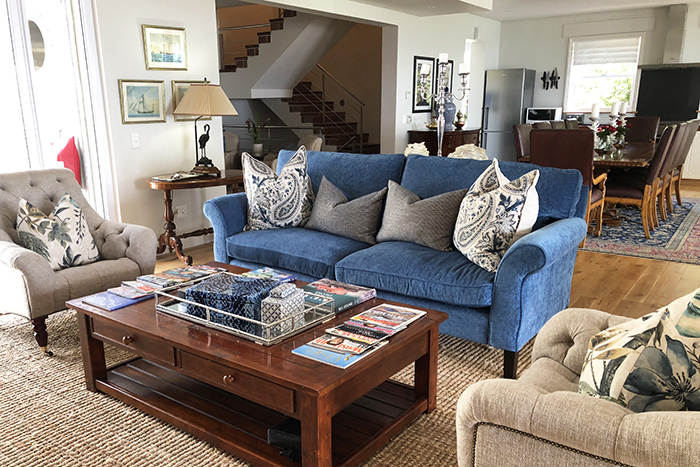 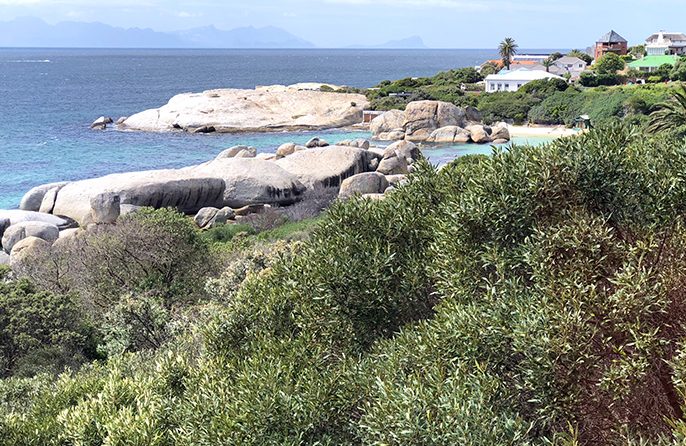 The divine double-storey villa comprises just a handful of plush marine themed rooms, each individually decorated, plus a penguin-themed children’s room complete with a TV area and games for littlies. Operating as a bed and breakfast, rates includes an incredible breakfast each morning, as well as afternoon snacks. Tintswalo Atlantic, though a half an hour away, is another great option for families looking to explore the coast. 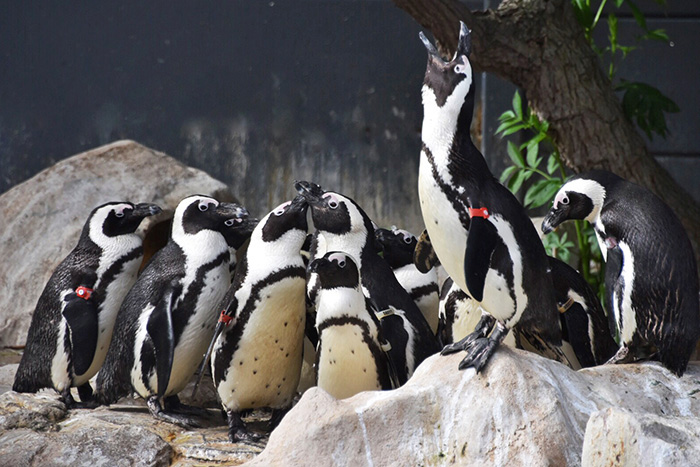 At Cape Town’s SANCCOB, the Southern African Foundation for the Conservation of Coastal Birds, more than 2,500 injured Cape Penguins and sea birds are rescued and rehabilitated every year. The hard-working team at SANCCOB provides a 24/7 rescue service for sick and injured seabirds, responds to oil spill disasters along the coastline and saves abandoned penguin eggs and chicks to hatch and raise for subsequent release back into the wild.

SANCCOB in Cape Town offer visitors the chance to watch and learn about sea bird conservation, with engaging, educator-hosted tours of the facilities. 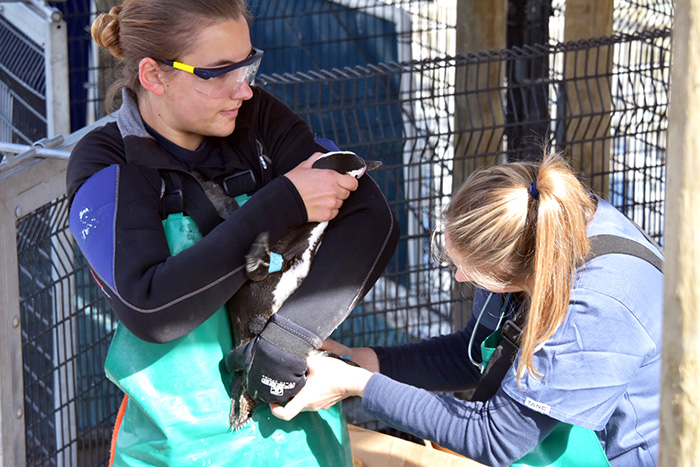 The kids watch the staff treating and injecting medicines into the feathered patients, visit the kitchens to see where their food is prepared, see eggs in the nursery and learn a little about some of the reasons the penguins find themselves here and how they are treated and released. They even get hands on with a taxidermied former penguin that Sugarpuff forms a rather macabre attachment too. 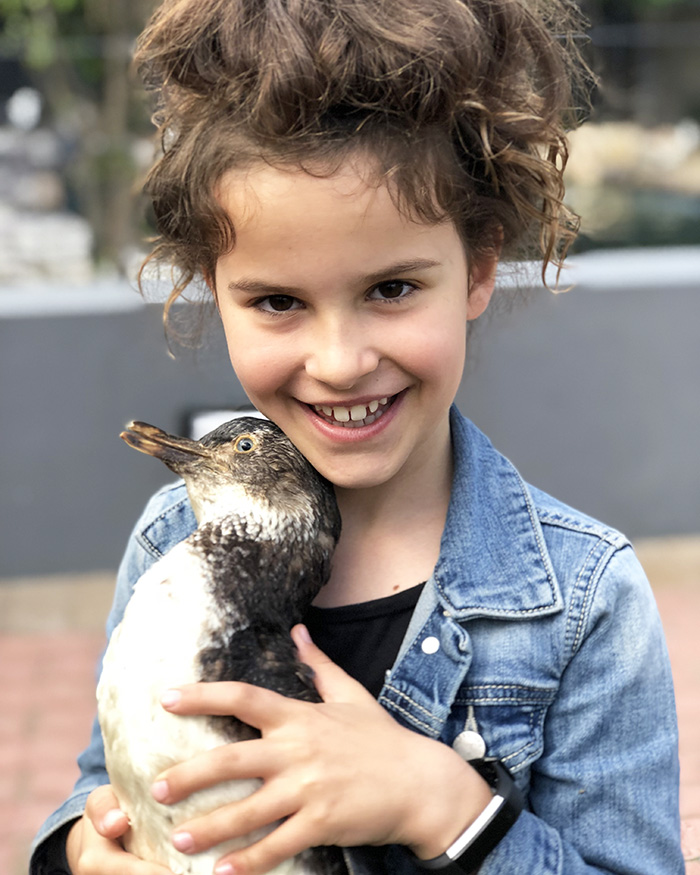 When they learn that the massive decline in African Penguin numbers means they’ll be extinct within 15 years, the kids are desperate to do their bit to help save them, pledging to eat only sustainable seafood and continuing to nix single use plastics. They also decide to become penguin ‘parents’ via SANCOOB’s adoption program. 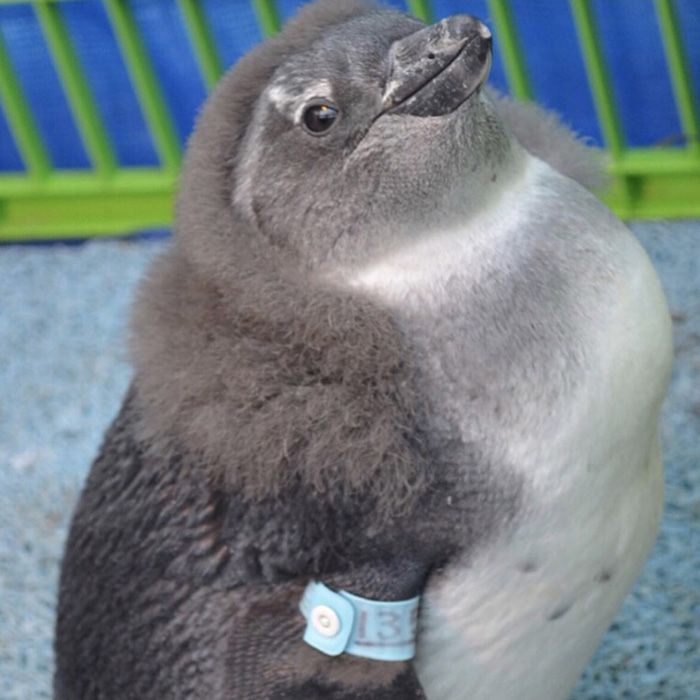 Faced with the choice of sponsoring an injured wild penguin, an egg or one of the centre’s ambassador birds that cannot safely be released back into the wild, the kids decide on a wild penguin patient who they name Chidi (for moral philosophy professor Chidi Anagonye of The Good Place), not only because they thought it was the best moral choice…  but because the penguin looked like it had stomach cramps (Good Place fans will understand).

Where to stay: While SANCCOB can be reasily reached from Cape Town’s city attractions, we chose to make an oceanside stay of things at Tintswalo Atlantic, a five-star, award-winning boutique lodge perched on a pebbly beach at the foot of Chapman’s Peak in pretty Hout Bay. 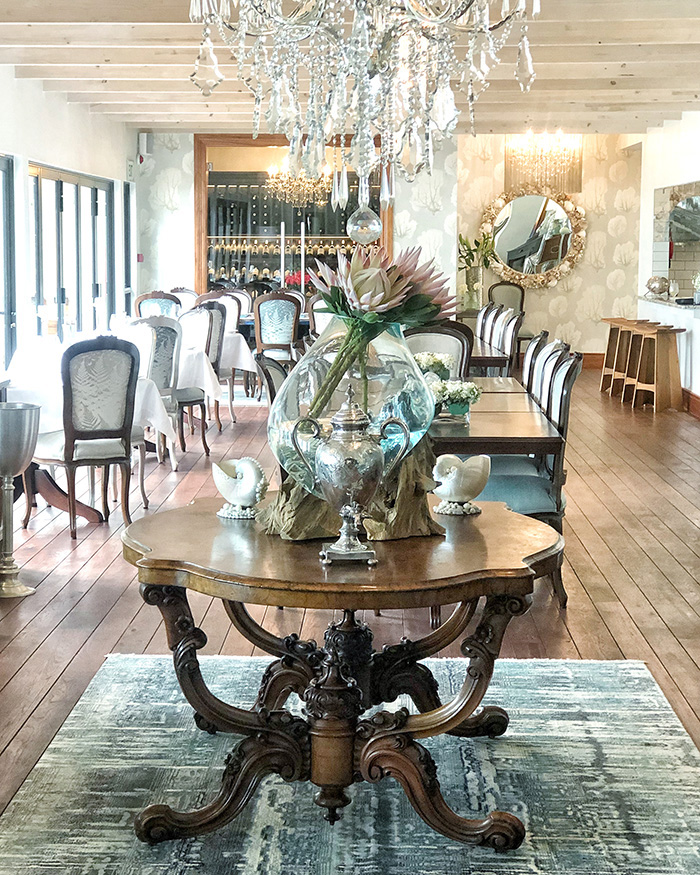 Located about 40 minutes from SANCCOB (and just 30 from Boulders Beach) the stunning luxury hotel has only recently reopened after a major refurbishment and rebuild following a fire. Ten island inspired waterfront luxury suites and one two-bedroom suite, which is ideal for families, overlook the roaring Atlantic Ocean, which provides a soothing soundtrack to our stay. 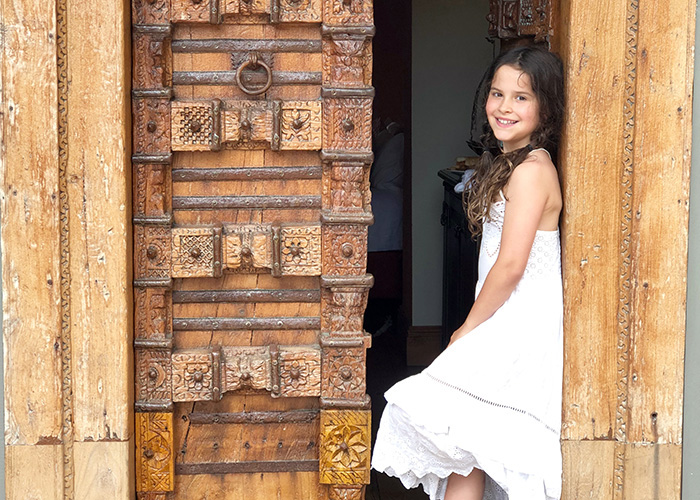 Our gorgeous Lamu suite features African inspired decor in earth colours, a divine wood burning fire place, huge freestanding bath tub and a mammoth balcony where my wildlife loving duo spot a distant whale and a cheeky otter slipping in and out of the rocks nearby. 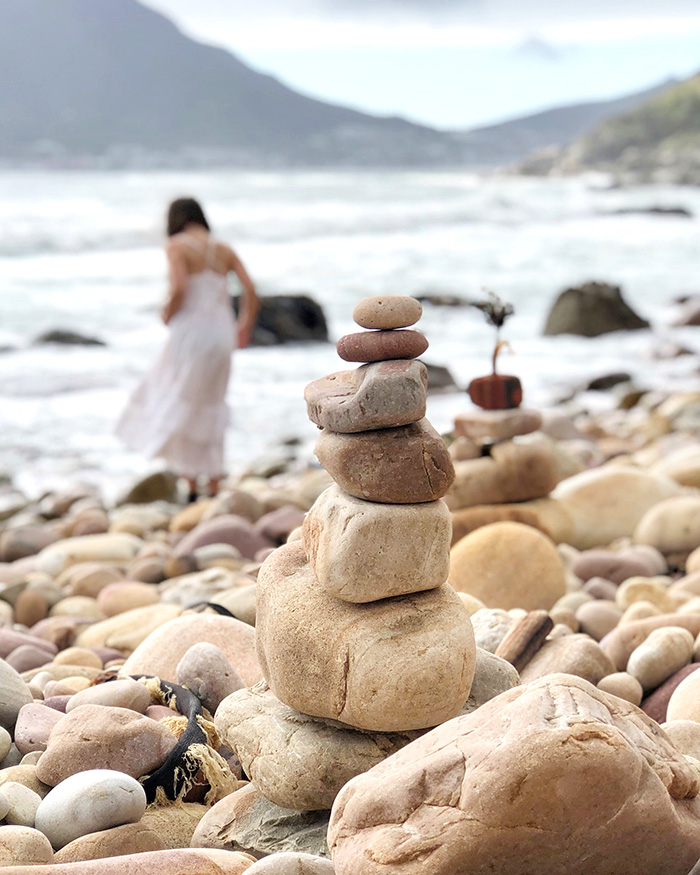 The food is next level with many memorable, mouth-watering moments courtesy of the kitchen team, whose dedication to locally-sourced and sustainable ingredients deserves a huge thumbs up.  When we’re not off enjoying tête-à-têtes with penguins, the kids are happy to stay at the hotel to splash about in the heated pool, sway in the hammocks, hunt for crabs and build towering cairns on the pebbly beach.

Research at The African Penguin and Seabird Sanctuary, Overstrand 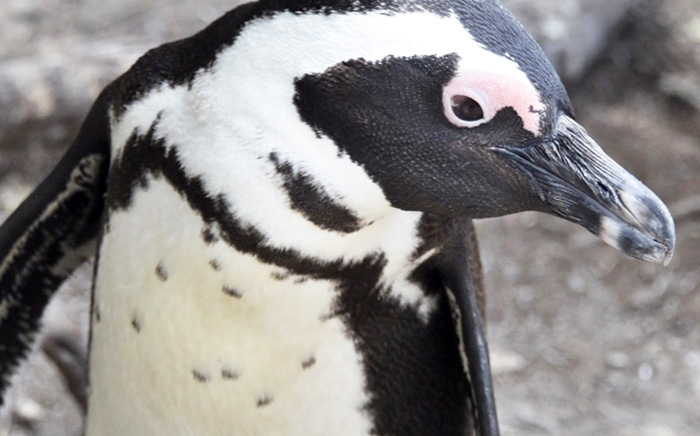 The African Penguin and Seabird Sanctuary (APSS) was founded by The Dyer Island Conservation Trust to aid the endangered African penguin colonies of Dyer Island in the Overstrand region, around two hours south of Cape Town. The 20-hectare Nature Reserve, situated 8.5-kilometres from Kleinbaai harbour in Gansbaai, has seen the penguin population decline by a staggering 90% in just 30 years. 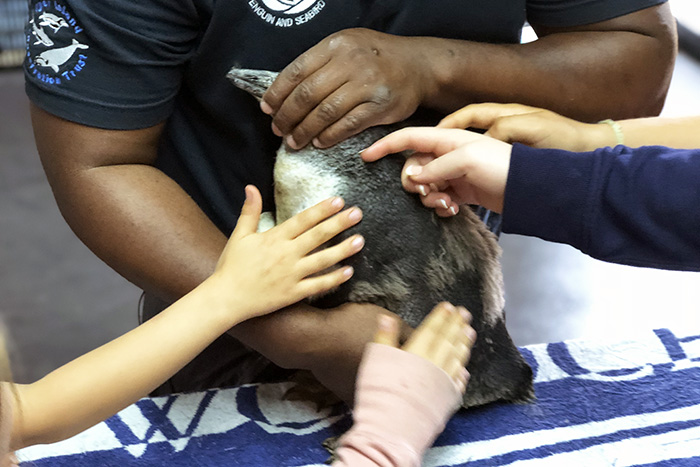 Purposely built for the rehabilitation of marine birds, this state-of-the-art facility has been designed to rescue, research, and rehabilitate seabirds. The APSS is staffed by a team of passionate conservationists and boasts a fully equipped lab and has a vet on standby to treat injured and orphaned birds as quickly as possible. 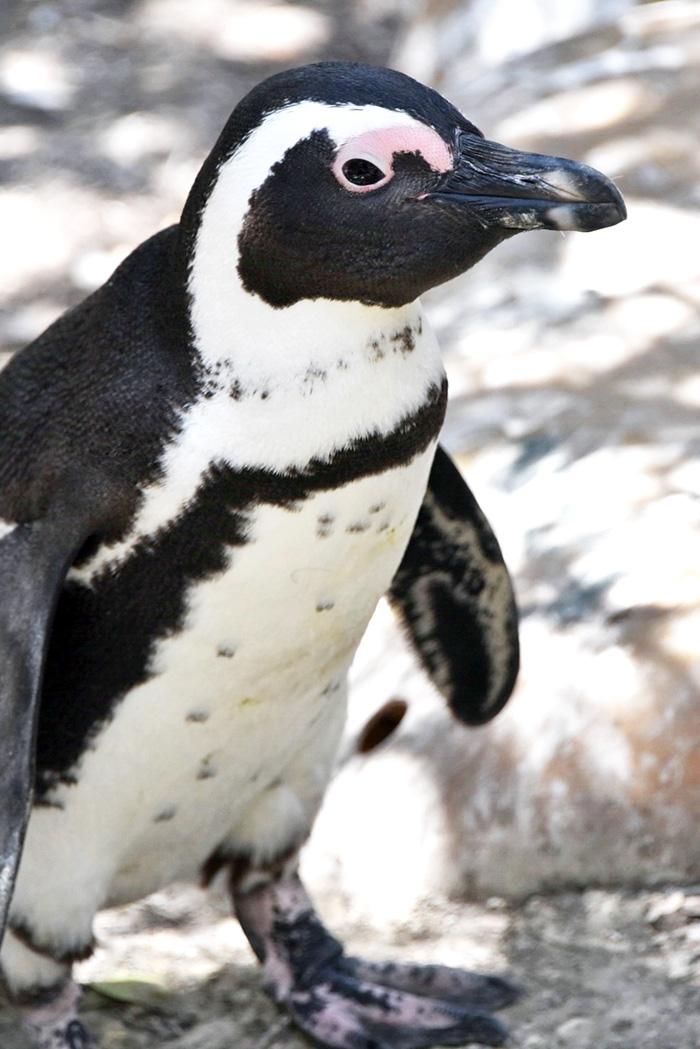 The centre is open to the public, free of charge, to assist in education and awareness of the plight of the endangered penguins. While a private tour allowed for a gentle hands on interaction with a penguin, to prevent stress on the birds in rehabilitation, the animals are kept away from visitors but there is live behind the scenes vision of the rehabilitation area, the hospital and the clinic, and there’s a one-way glass overlooking a holding pen for birds in final preparation for release.

Where to stay:  Grootbos Private Nature Reserve is‎ an award winning five-star eco paradise and foundation that is a proud partner of AFSS. The family friendly nature reserve, built on a hillside in the smallest yet most diverse of the world’s plant kingdoms, is a thriving example of travel and conservation working together with many programs in place to introduce families to conservation. 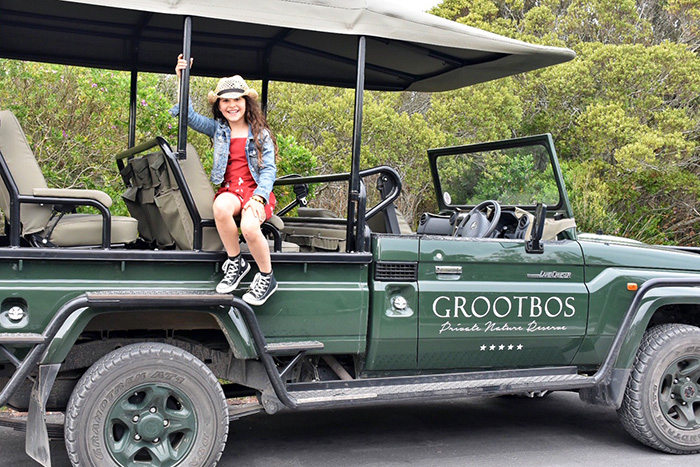 From immersive safaris in search of the tiniest of bugs to the Big Marine 5 (whales, sharks, dolphins, seals and African penguins) and, of course, our visit to learn about the penguins African Penguin and Seabird Sanctuary, the dedicated naturalist guides at Grootbos engage and introduce our kids to the importance of all creatures to the ecosystem. 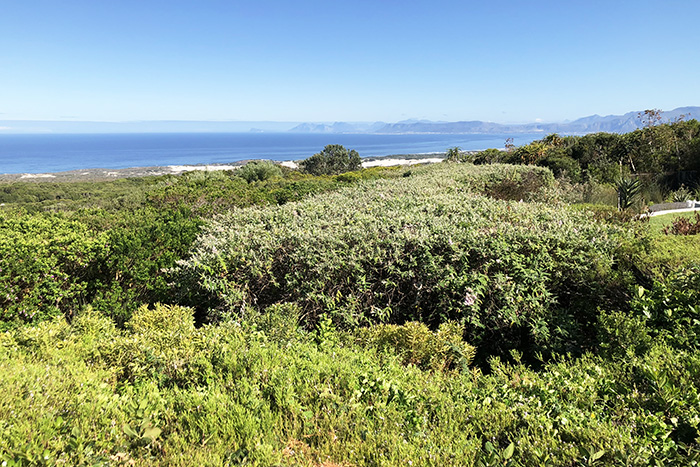 Grootbos’ luxurious lodges are uniquely positioned to capture the magic of not only the flora but incredible views of the ocean. Our Garden Lodge suite is stunning, with a light-filled lounge, separate bedroom and a large wooden deck overlooking hectares of glorious natural flora. Then there’s the insanely good cuisine. Fuelled with fresh organic produce, mostly grown on site, and prepared by an incredible team of culinary superstars, every mouthful is magic.

When to visit
Cape Town is a great destination all year around.
Language
Though there are 11 official languages spoken in South Africa – most commonly  Zulu,    Xhosa, and Afrikaans – English is widely spoken in Cape Town.
Currency
The Rand (R)
Power
Voltage is 230V and 50Hz. Power outlets are round three pin sockets.
Visa & Passport Requirements
A South African tourist visa is not required for citizens of Australia for a stay up to 90 days. Visitors require a passport that is valid for a minimum of six (6) months. South African law requires all children entering or leaving the country carry a certified birth certificate and parental consent affidavits if they are travelling with only one parent.
Health
Cape Town is free from malaria. While there are no essential vaccinations for travellers at the time of publication, we advise visiting your family GP a minimum of six weeks before travel for up to date health recommendations.
Crime
Crime is high, but 95% of serious crime occurs in the communities of the Cape Flats area, where it is not advised to travel. Pick pockets can be an issue and it is advised always keep cash and valuables out of sight. It is not recommended to catch public transport or walk after dark, UBERs are the safest option.