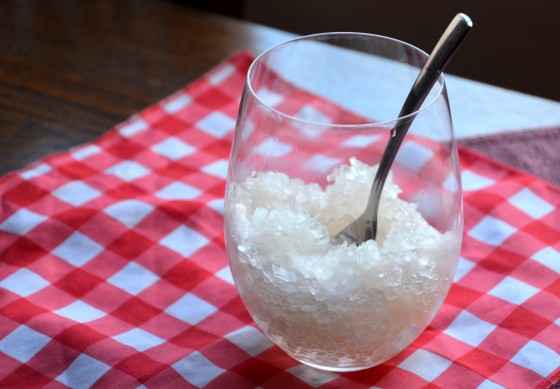 Mr Eats World is not keen on surprises. And by not keen, I actually mean that he’d rather have his tongue beaten flat with a steak tenderiser than be on the receiving end of one.

I’ve never actually been able to work out the reason behind his revulsion but it means spontaneous bursts of giftage tend to be fairly thin on the ground as I’d rather not rock the surprise-hating boat. But trying to convince a small boy who lives for surprises of this is about as easy as trying to convince a lion to go vegan.

It’s Mr Eats Worlds birthday and Raffles has decided that in the spirit of our recent holiday nostalgia he’d like to surprise his dad with a special Italian dinner to remind him of all the fun of our trip. Personally, I think he’s just looking for an excuse for me to make pizza for dinner but if he’s got that continental feeling, who am I to say no?

“Can we make some of that raw meat with the white muck on it that daddy ate all the time when we were in Venice too?”

Carpaccio you mean, my darling? Why not?

“Mama, we have to make granitas!”

As we do, according to you, every day of the week my wee ice addict. But this is his gig so my desire for a Bellini is nixed in favour of the shaved ice treats. At least he has the good taste to select a peach flavouring (which would taste soooo much better with a hit of prosecco).

We need a soundtrack for this party but I’m pretty deficient in music with an Italian vibe. But between all the Floyd and Zeppelin and indie rock, I’ve dug up a little Vivaldi and Dean Martin (How the hell did he get in there?). Raffles picks the latter, giggling hysterically at the lyrical genius of, “when the moon hits your eye like a-big-a-pizza pie”.

I last about two minutes into Dino’s schmaltz before I have Vivaldi head-butt him into musical oblivion. Raffles is not thrilled but thankfully Sugarpuff also digs the classics, so I have back-up.

Keen to replicate as much of our Venetian experience as possible, Raffles practices his Italian vocab, all five words of it – buongiorno, arrivederci, ciao, grazie and cretino (I swear that one isn’t my fault) – as he sets the table with a red checked table-cloth (out of his sister’s toy picnic set) and candles.

His attention to detail is impressive! In fact, at the rate he’s going I wouldn’t be surprised if starts constructing a full scale replica Gondola in our living room.

While Raffles decorates, I slice up a beautiful Angus beef fillet only to discover my skills at slicing paper-fine sheets of meat are not that great. But slicing my fingers is something I’m freakin’ awesome at! The end result isn’t as delicate or as pretty as I’d hoped but it tastes fab. 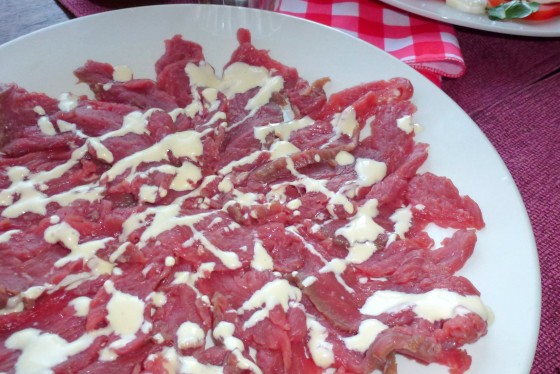 I love a good old fashion Inslata di Pomodroro E Mozzarella but feel like creating something that’s a little more modern than the traditional layered version so I chuck mixed heirloom tomatoes in a bowl with fresh basil, anchovies and torn chunks of fresh mozzarella. 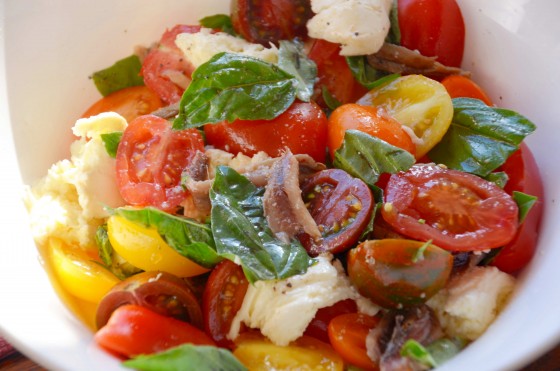 Raffles wants us to make a hot and spicy Pizza Diavola, which was both he and his dad’s favourite in Venice. He kneads the pizza dough and I help him slather it with tomato puree, spicy pepperoni, anchovies, a touch of flaked chilli and some fresh mozzarella before popping  it on a pizza stone in the oven. 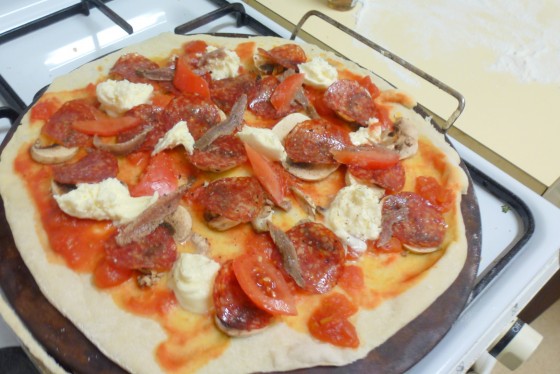 I’ve asked Mr Eats World to call us when he’s close to home (so we can shave the granita ice to be ready on arrival). He sounds suspicious but does as he is bid.

We prepare the peachy keen ice and as soon as Raffles hears his dad’s key in the door rushes, outstretched granita in hand, shouting, “Buongiorno daddy, SURPRISE!!!!!!”

Mr Eats World looks confused, and not a touch frightened, as he’s dragged into the dining room where my unrefined Jackson Pollock wannabe attempt at carpaccio (in  fact, my version will henceforth to be referred to as crapaccio) and deconstructed salad await under flickering candlelight.

Raffles chest bursts with pride at the spread and for once, the surprise appears to have had the desired effect. Mr Eats World is rapt.

After we slurping up our granita’s (thanks again Santa for the equipment) we dine on the melting slivers (read lumps in this case) of crapaccio with its tangy sauce and heap the salad on to our plates, enjoying every fragrant, salty, juicy bite. Raffles and Sugarpuff both surprise me by digging the raw beef and while they both dodge the salad the tomatoes are bursting with so much loveliness I’m happy to scoff their share.

While Raffles and his dad reminisce about all things Venetian, Raffles dons his mask for full effect, rendering it impossible to continue a serious conversation with a straight face. 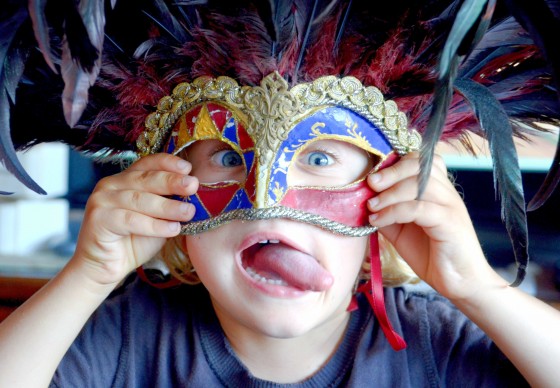 I head off to fetching the sizzling pizza  and serve it up to my hungry hordes who devour the fiery Diavola. 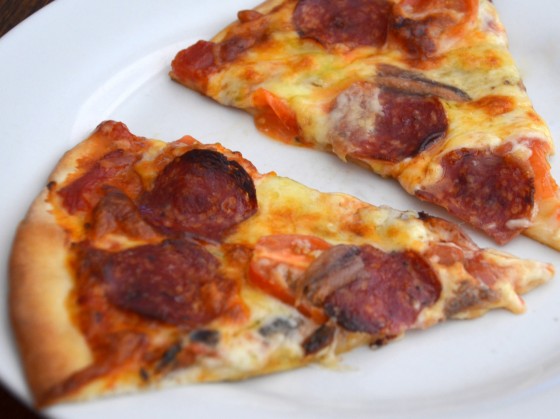 There is one last surprise and it is reserved until after all the candles are blown out on the Raffles designed birthday cake – which he claims is inspired by all the colours of the Venetian glass that I wouldn’t let him anywhere near! I think it is actually more inspired by his desire to consume as many Smarties as humanly possible. 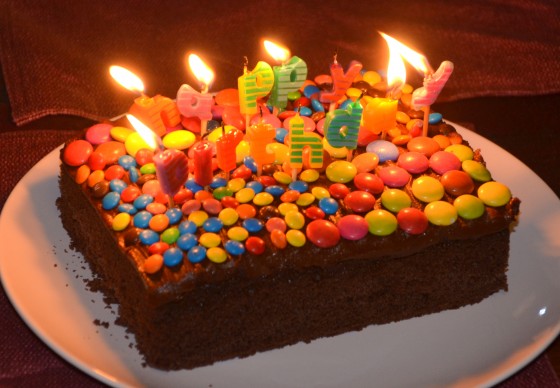 Time for Raffles big surprise, and it’s something even I haven’t been let in on. He tells Mr Eats World that he’s learned a new song today and would like to perform it for him for his birthday. So, as Sugarpuff dances wildly along and Mr Martin rolls in his grave, Raffles bursts into song…

So maybe “learned” is too strong a word and yeah, it’s a touch more Jerry than Dean but full marks for effort Raffles.

Note: Dressing can be kept in an airtight container in the fridge for three to four days and makes an excellent sauce for hamburgers.