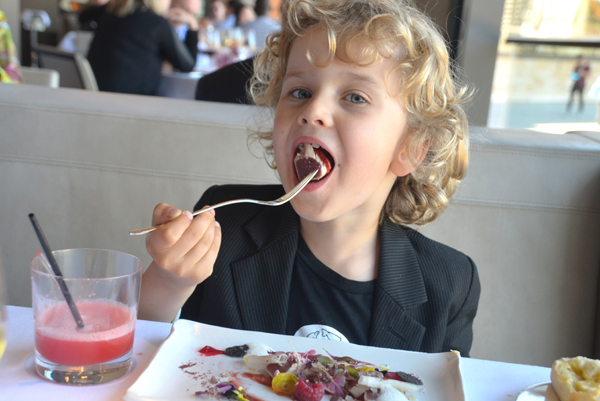 Do you know how cool my mama is? It’s a lot. And not just because she’s nice, which she is, but because she takes me on special lunch dates so I can eat loads and loads of food. And everyone knows that the way to my heart is through my belly. Actually, I think my heart is in my belly.

Though I always like our food adventures, this time Mama did something extra special and took me to lunch at The Dining Room in the Park Hyatt Sydney. I had to wear my best jacket because it’s a bit posh. 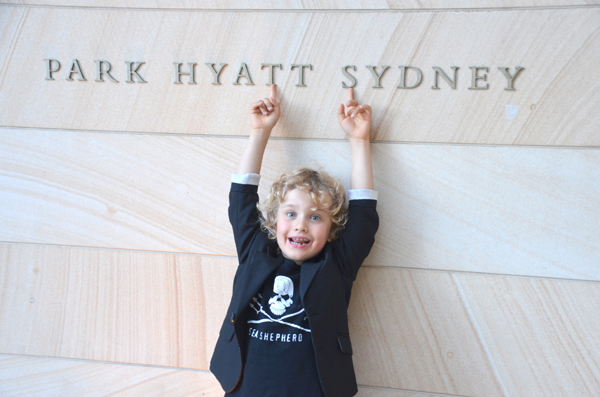 All the people there were dressed really nicely and smelled good. I guess that’s because they all had showers before they went. It’s that kind of place. It’s so nice inside and has cool dingly dangly lights and views of the Harbour. We were really lucky because our table was by an open window next to a pirate ship parking lot. There were pirate ships coming and going the whole time. I don’t know what they were up to. The pirates were probably told to leave because they would have been too smelly to have lunch here. 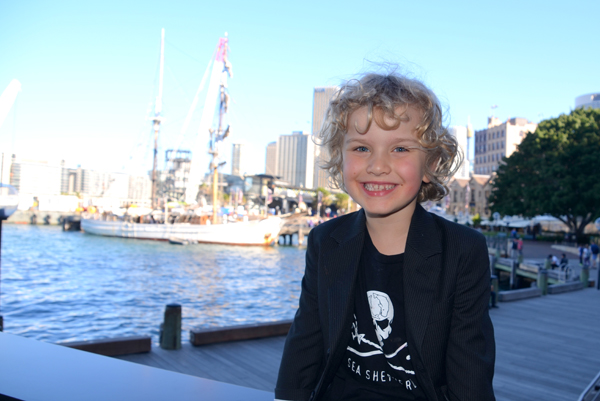 There were so many yummy things on the menu that it took me ages to choose what to eat but in the end I had the Seared Blue Fin Tuna (with beetroot and raspberry sauce, dashi and sumac). I’ve never had tuna like this. It was a little bit like sashimi… only much better. 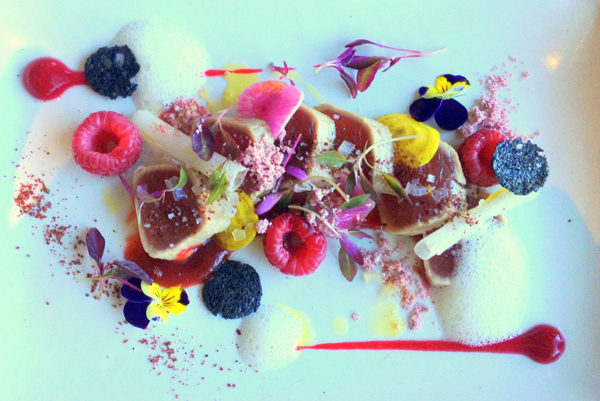 It melted in my mouth and came with hundreds of little flavours all over the plate. There was a salty raspberry powder, sumac and something frothy. It was A-MAZING!

Mama had Duck Foie Gras (with brioche, rhubarb, hibiscus and berries). It came with raspberries and strawberries. She let me have half. Oh. My. Gosh! Whoever thought of combining berries with pâté is a genius. 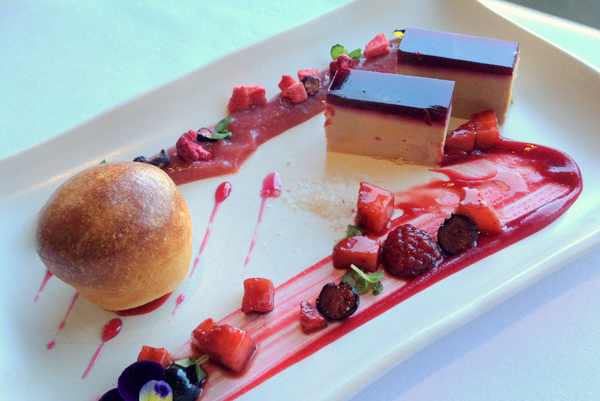 For mains I had Cobia (with carrot and ginger mousseline, baby spinach, sesame, orange and mirin). It’s a kind of fish that was juicy and really tasty and I liked it so much that when Mama tried to have a taste I stabbed her with my fork. 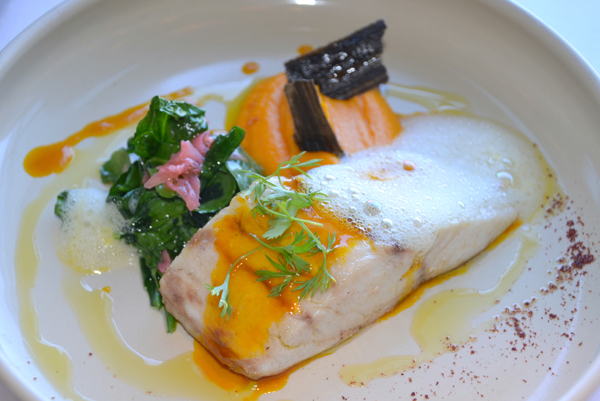 She had lamb (Murraylands lamb loin with spring onion, baby pak choi, pistachio and tarragon sabayon) and she didn’t stab me back when I wanted to taste some of hers. I told you she was nice. 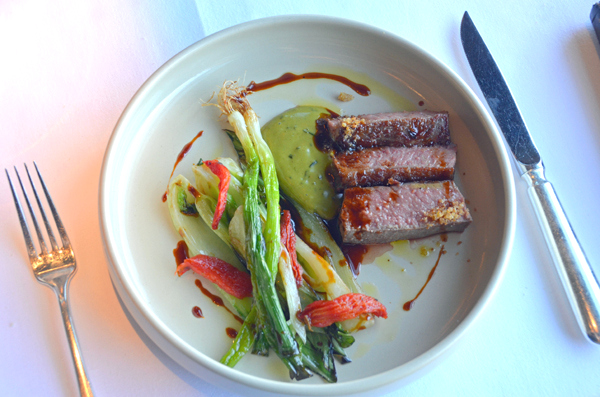 I feel like the food here is a lot French and a little bit Japanese… like somehow they’ve been combined. That’s good because I like both. I think the chef is like the Leonardo Da Vinci of food. Leonardo de Vinci was an artist and an inventor a long time ago and the chef here is an inventor of food that looks like art. We got to meet him, his name is Franck and he’s a proper French man. 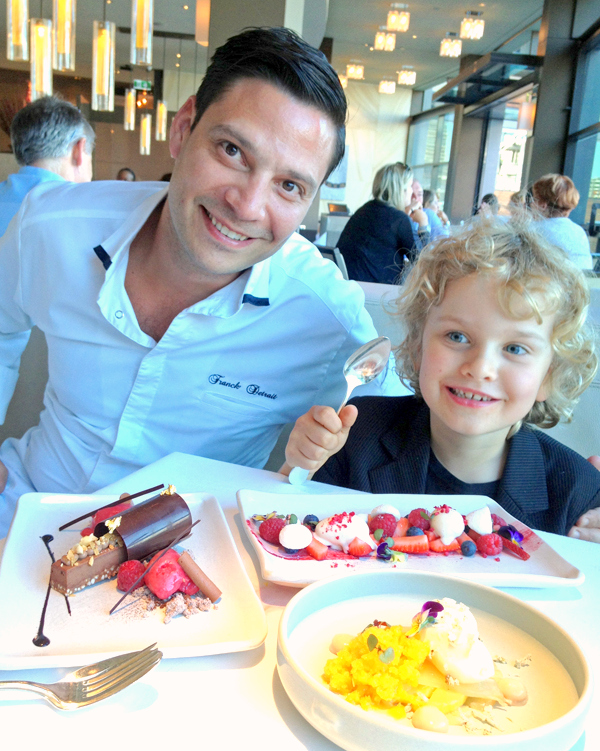 I like French people because they have cool accents, make awesome food and are really, really nice. We talked about cheese and he offered me a job in his kitchen. I’d take him up on it except I’d probably just eat all his food and then he’d get cross at me.

As a surprise he gave me three desserts! THREE! And the world’s most delicious chocolate truffle, but that doesn’t count does it? Anyway, the desserts made my eyes explode. They were the most fabulous desserts I have ever, ever seen and they tasted better than they looked. My favourites were the berries (with marshmallow, meringue and yoghurt sorbet) and the plate of chocolate everything (Chocolate Gran Cru, hazelnut, quinoa and raspberry sorbet). 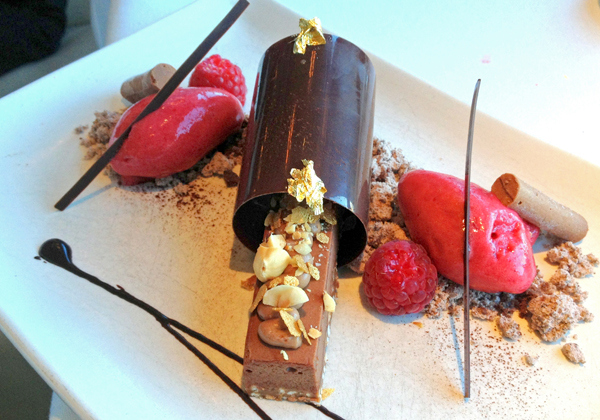 It had chocolate dust and soft mouse and crunchy bits and it was like having a food party in my mouth. I ate both of them and mum didn’t even get to taste. I let her have the Pineapple (caramelized pineapple with banana, coconut and mango granita). She said it was nice.

After lunch we went for a nice walk along the Harbour. It was really fun. 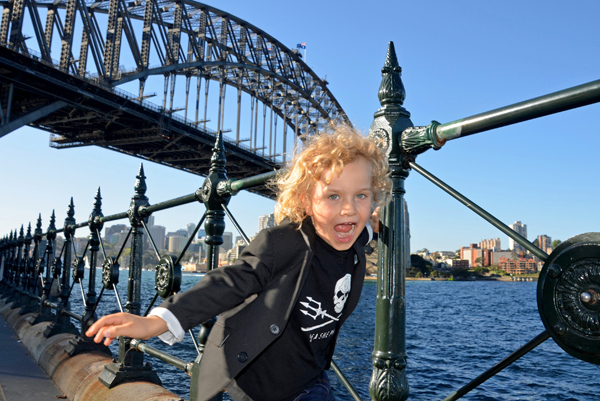 I’ve eaten in lots of places and this was definitely one of the best meals I’ve ever had. Next time we’ll take daddy. But only so I can eat his dinner too.

Reviewed by Raffles – aged 6
*bracketed detail by his mama