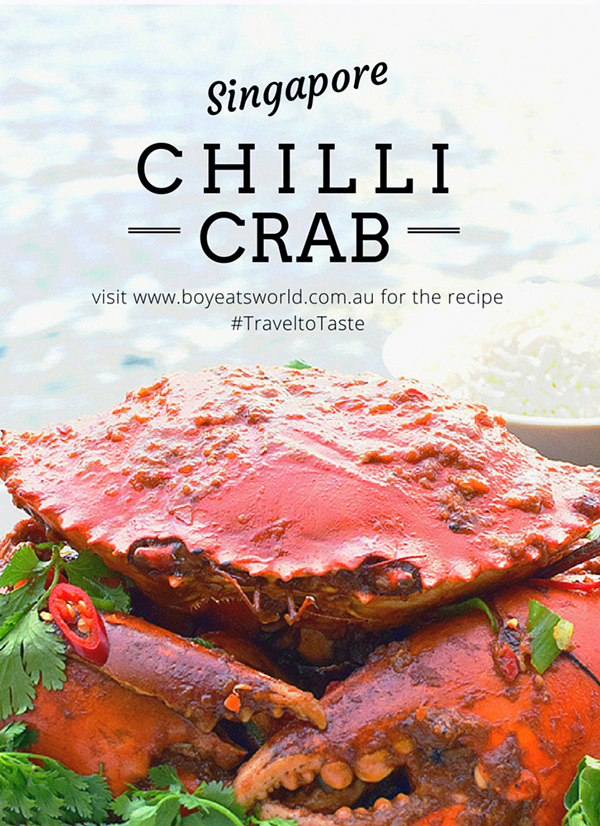 While some people collect souvenir spoons and tea towels on their travels, we collect recipes. Nothing brings the memory of a destination flooding back quite as effectively as the sight, smell and taste of its cuisine. Oh, all right… it’s also due to the fact that we’re gluttons. But let’s not split hairs.

As my old pal Babar, the Elephant says, “Part of the fun of sailing through life is tasting different ways to live!”  It’s also the best way, in my humble opinion, to conjure up memories of adventures past.

A steamer of Xiao Long Bao can whizz Raffles straight back to the gardens of Shanghai Old Town, while a pile of fragrant couscous has him mentally riding camels in Muscat. Sugarpuff still brings up how much she loved playing in a water park in Bali every time I cook nasi goreng and for Mr Eats World, nothing takes him back to his childhood in England as quickly as good fish and chips! As for me, a crusty baguette and a plate of oozing Brie has me cerebrally singing “Non, Je Ne Regrette Rie,” off-key, on the banks of The Seine.

Food is such an integral part of our family travel experiences that while on a whistle stop tour of Singapore last week, and with just one evening free, Raffles chose to spend all of it eating. After he reeled off a wish list of at least half a dozen of Singapore’s most famous dishes, I realised that in place of our usual fine-dining preferences, a visit to one of Singapore’s Hawker Markets was the only option. But with so many scattered across the city, which one?

We turned to TripAdvisor – always our first port of call when we’re searching for a special meal when we travel.

With more than 250 million reviews by travellers just like us, the site provides the inside scoop on a city’s best spots to eat. In fact, TripAdvisor’s Traveller’s Choice Restaurants – those elite dining establishments that have earned the highest praise from millions of travellers for their gastronomic charms – are regularly added to our culinary bucket lists.

Though on this occasion – with a small walking, talking compactus to fill – we’re looking for something a little less salubrious. After spotting its TripAdvisor Certificate of Excellence and wading through just a few of the hundreds of detailed reviews about the ambiance and great food, we settle happily on Lau Pa Sat, a hawker market right in the city centre.

But Raffles, confronted with more than 50 food stalls, has zero time for architecture appreciation and is soon diving head first into a plate of succulent Hainanese Chicken Rice! This is followed by the steaming bowl of seafood spiked Laksa that he had been banging on about sucking back from the moment I told him we were heading to Singapore. 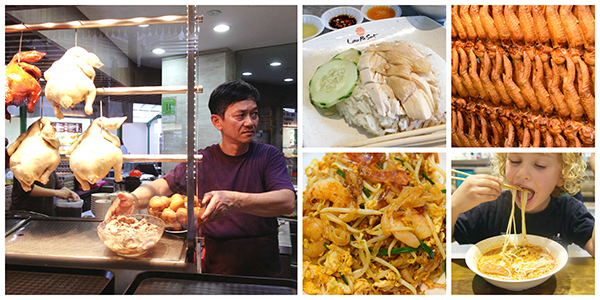 During round two of our Lau Pa Sat festival of gluttony my suggestion of Pig’s Organ (a local delicacy) was quickly vetoed by Sugarpuff, while Raffles struggled to choose between char kway teow and a plate of barbecue chicken wings. Just as I thought his head would explode form the enormity of the decision, I saw his eyes latch on to something in the distance.

And like that he was up to his elbows in sticky spicy red sauce and slurping down the delectable crabmeat. A dish so good that it wouldn’t be out of place in one of those elite TripAdvisor Traveller’s Choice dining establishments… though Raffles chilli-smothered face certainly would be! 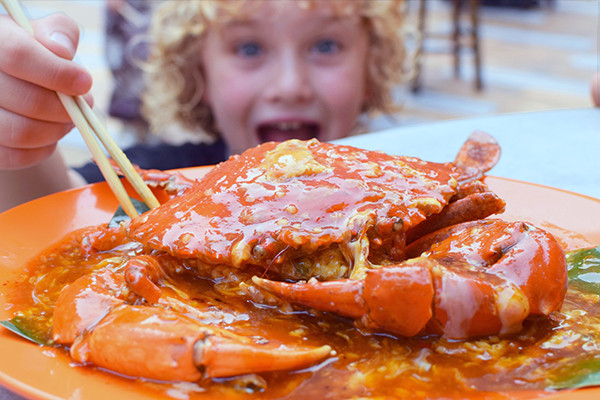 We topped off dinner with an icy bowl of sweet, coconutty cendol and, just when we thought we’d torn the unfillable one away, he spotted Lau Pa Sat’s ‘Satay Street’, an outdoor dinning area that was just springing to life.

“I’m still hungry” came the predictable plea of Raffles. Once Sugarpuff spotted ‘things-on-sticks’ she too joined the chorus and declared she was suddenly “Starving!”

Following up another lead from TripAdvisor, we headed straight for Satay Street’s stalls 7 and 8, and ordered up plates of prawn and chicken satay, which were accompanied by several sauces, sliced onions and cucumber. I think. The kids wolfed them all down at such record speed there wasn’t time for a stocktake. 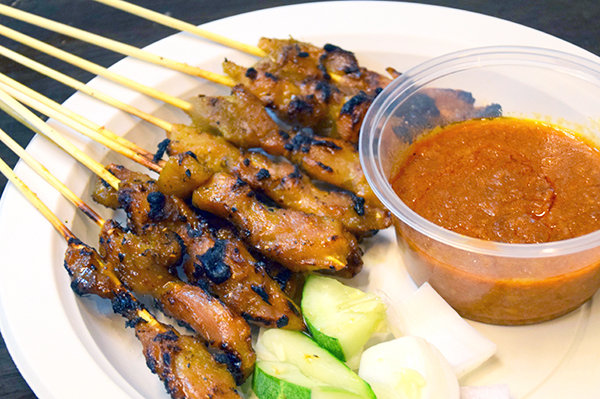 Of course, eating wasn’t the only thing we did in Singapore. Indeed, we enjoyed the splendour of the newly refurbished Sofitel Singapore Sentosa Resort (incidentally, their Indian buffet was good enough to make me weep) and swam in their incredible pool until our fingers got all pruney. We also flew at lofty heights across the water on the Mega Zip, hooned down the luge, crawled into the belly of the beast at Sentosa’s own Merlion, frolicked on the beach and filled our bags with sweet treats at Candylicious. And all of it was, as Raffles will attest, “epic!”

So what else did we bring home besides a bagful of candy? 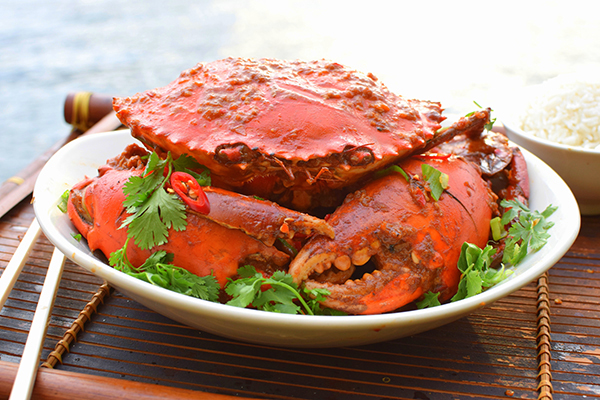 A recipe for that luscious Singapore Chilli Crab … and a bucket load of memories to share with out friends and family as they devour our interpretation of Singapore’s Signature Dish. 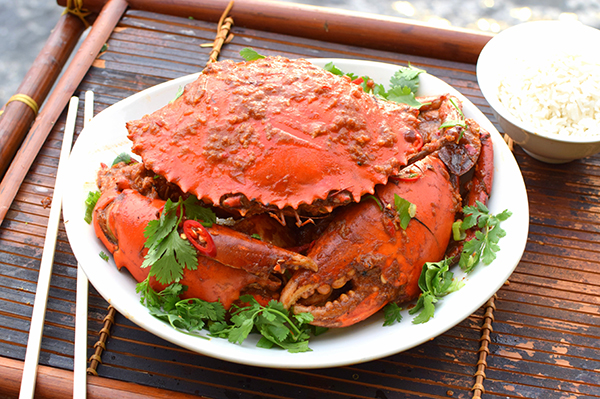 Disclosure: This is a sponsored post in partnership with TripAdvisor #TraveltoTaste however all opinions are my own.

37 Comments on Singing the praises of Singapore Chilli Crab