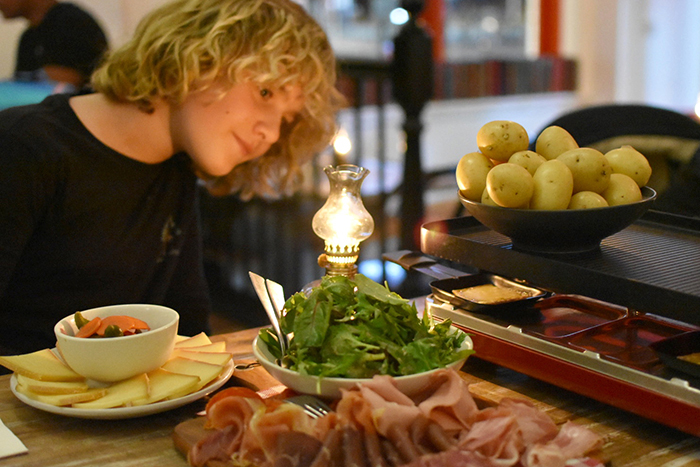 When Mum first explained to me the concept behind Raclette, I thought it was far too good to be true.  Seriously, what could possibly be better than a variety of charcuterie, steaming potatoes, pickles and fresh salad…  covered in wads of oozing melted cheese?

I was drooling just talking about it, so when she told me we were heading to Hemingway’s Manly, one of my favourite French restaurants, for their new Soiree Raclette, I was out the door and in the car before Mum could even grab her keys.

I’ve said it before and I’ll say it again, I adore the relaxed vibe of Hemingway’s, with its floor to ceiling bookcases and pictures of the restaurant’s literary namesake, as much as I love the menu and the welcoming service.  As soon as we arrived we were escorted to a table complete with a Raclette grill by Sonia, one of the owners of the restaurant, who hails from the Alps of France and is one of the nicest people in Manly. OK I may be a little biased because she feeds me but trust me, she’s a star. 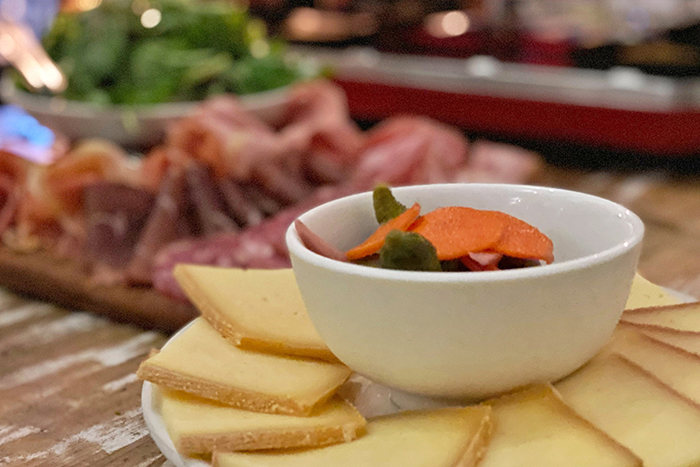 We’d barely ordered drinks when the goodies started piling up on our table: a platter of delicious charcuterie meats like prosciutto, pancetta, salami, chorizo and bresaola, bowls of pickles and gherkins, steaming baby potatoes, a fresh green salad, and, of course, thick slices of magical Raclette cheese.

Then Sonia gave us the downlow on how to Raclette!  Basically you pile a little shovel-like tray with slabs of the Raclette cheese, place it in the grill, and then pour the molten and oozy result all over a heaped plate of charcuterie and spuds. It’s like a fondue on steroids, and yet unlike anything I’ve ever eaten. I mean, it is such a simple idea, and yet the result is one big plate of cheesy heaven. 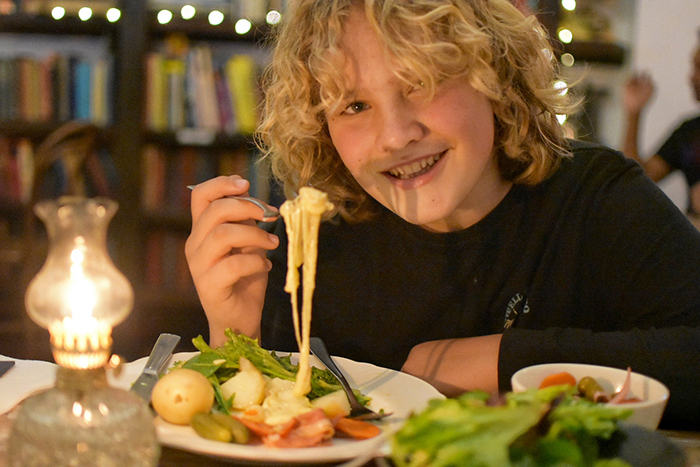 The Raclette Soiree also includes a dessert called Dame Blanche, which is essentially a deep bowl of creamy vanilla ice cream smothered in a rich hot chocolate sauce topped, whipped cream and almonds. Sure it’s simple, but ice cream sure doesn’t taste that good when I lob it in a glass. There is some secret French sorcery going on here for sure.

I made the mistake of looking at the rest of the menu and saw it was full of other French faves like beef tartare, ratatouille and the week’s special, duck confit. Which means we’re now going to have to go back again for dinner tomorrow and the next day, so I can eat my way through the entire menu. Or just order another Raclette.

Hemingway’s Raclette Soiree is available on Thursdays, Friday and Saturday nights and is $45 per person. Which, when you consider we ate so much that we had to waddle out, I reckon is a bargain.

Disclosure: Raffles was a guest of Hemingway’s Manly.