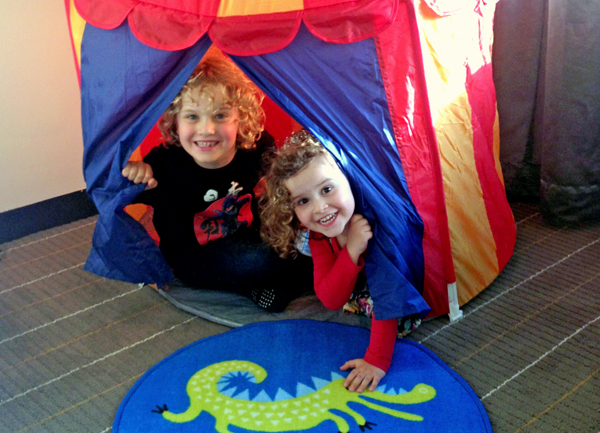 While Raffles and Sugarpuff’s recent bucket and spade lists were overflowing with exotic holiday ideas, our summer holiday budget does not really stretch to flying to Scandinavia in search of Arendelle and its icy queen, or traipsing all the way to Japan just to buy Kit Kats.

But a lack of bucks does not negate our need for a getaway. So the only logical solution is to keep it local… so local that we’re not even planning to leave town. Instead we’re going to soak up the sights and explore some of the fabulous attractions that we never seem to find time for around Sydney… and the kids are pretty excited about it.

You see, last school holidays we drove 15 whole minutes to our holiday digs, the Novotel Sydney Central. Within walking distance to the CBD, Chinatown, Central station, Darling Harbour and Cockle Bay, the hotel’s fab location had us right in the thick of loads of family fun. At least it would have if the kids had actually been prepared to leave the hotel. Why the lack of enthusiasm to explore? Because at the Novotel Sydney Central they were treated as valued guests from the minute they skipped through the door.

Seriously, they were dancing around a chocolate fountain with skewers of fresh fruit and chilling in the kid zone before we’d even checked in. 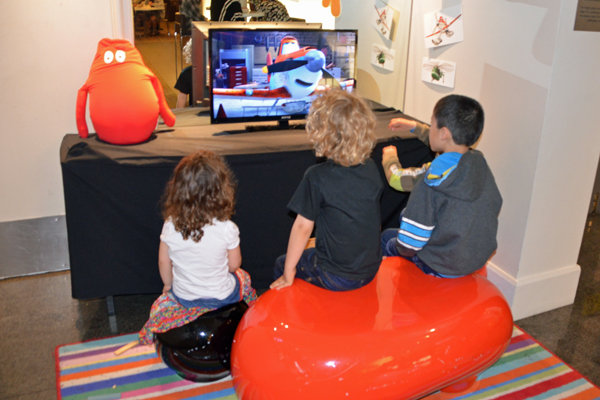 We had to twist their chocolate-coated arms to actually leave reception but, once we’d wrestled them into the elevator and down the hall to our guestroom, the chocolate fountain, impressive though it was, was soon forgotten.

Our comfortable and contemporary family room included a brightly coloured cubby house packed full of surprises. Before Mr Eats World and I even made it inside the door, Raffles and Sugarpuff had vanished inside their “castle” to get busy with play-dough, card games and cuddly toys.

But we were determined to make the most of the hotel’s convenient location so after a little more wrestling, we frog marched them to the IMAX theatre in Darling Harbour for some 3-D movie action.

We returned for dinner at the hotel’s Field House Restaurant and Bar where Mr Eats World and I devoured perfect grass-fed Cape Grim beef while Raffles gorged himself on a sensational red curry duck that he’s still talking about. 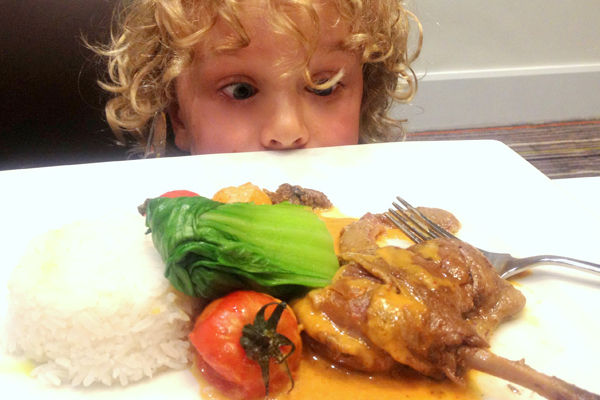 Sugarpuff? Well she was far too busy colouring in the pages given to her by the lovely wait stuff to be bothered with eating… that is until the desserts arrived.

After our delectable dinner we popped on some comfy hotel slippers (and by popped on I mean the kids stole them and left us barefoot) and we all snuggled up in bed to watch an in-room movie with bags of freshly popped pop corn delivered by room-service. 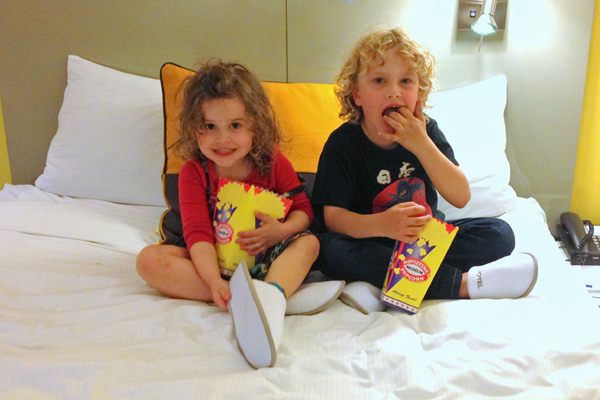 We may have been mere minutes from home but it sure felt like a holiday to me.

As part of our Novotel Sydney Central Family Fun package we enjoyed a leisurely full buffet breakfast – the kids taking off to the play area meaning we even get a second cuppa in peace. A privilege I’d be happy to pay extra for. 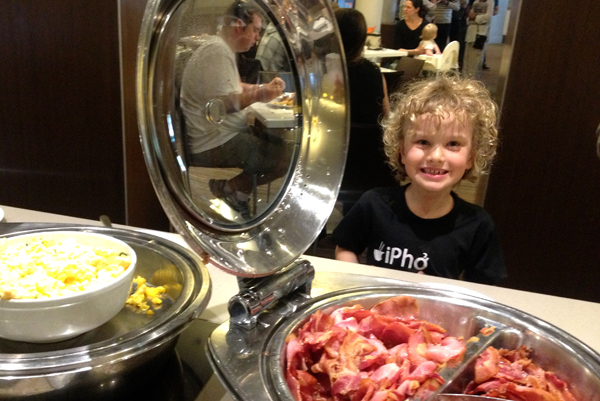 Then it’s time to make use of a complimentary family pass to SEA LIFE Sydney Aquarium to check out the super cute dugongs and toss the kids to the sharks. Quite literally. 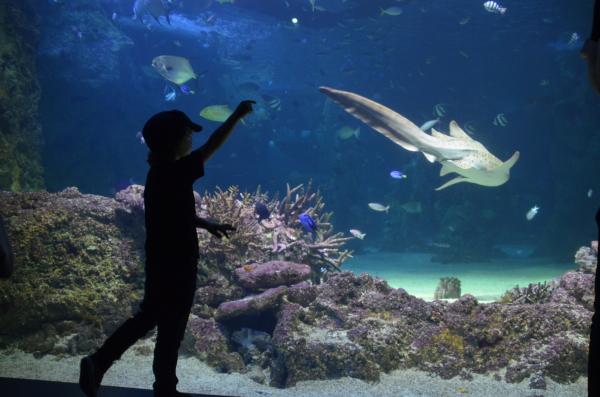 There’s no denying that it is fascinating to watch the magnificent creatures glide over your head in the underwater viewing tunnels, but donning a wetty and snorkelling alongside them in the aquarium’s Shark Reef Snorkel is far more exciting.The safe and secure “tank within a tank” in the Great Barrier Reef meant Raffles and I could hold hands while we enjoyed our face-to-fin encounters with sharks and rays. 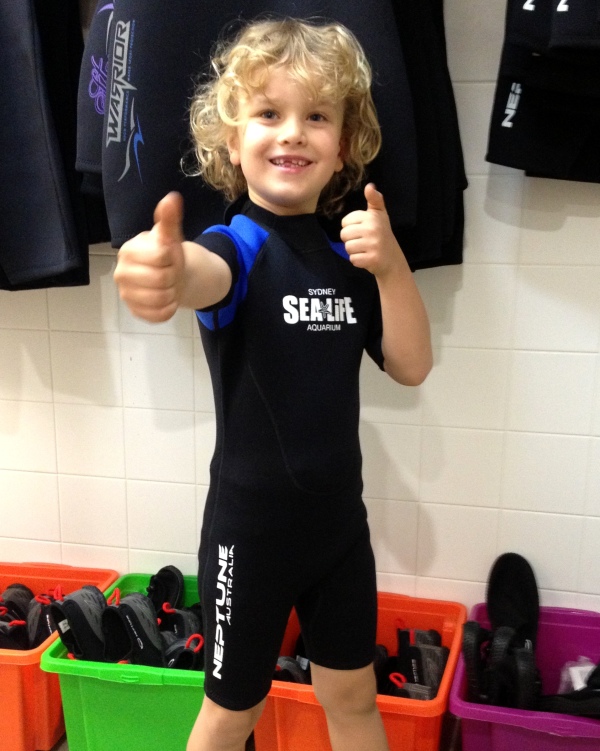 The Novotel Family Fun package also came with  late check out, so with plenty of time left to play we made a pit stop for a twirl in a tea cup… 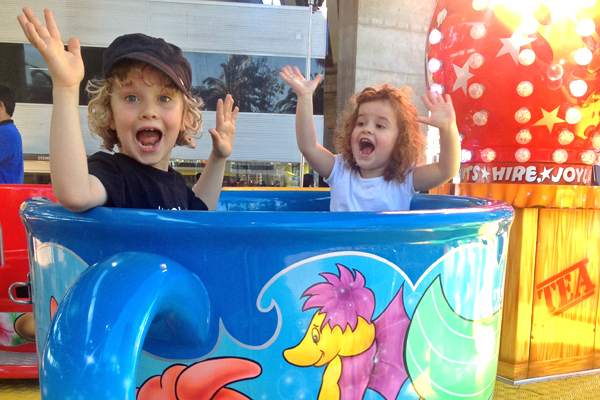 And popped in to Madame Tussauds to hang out with some of our favourite A-listers. 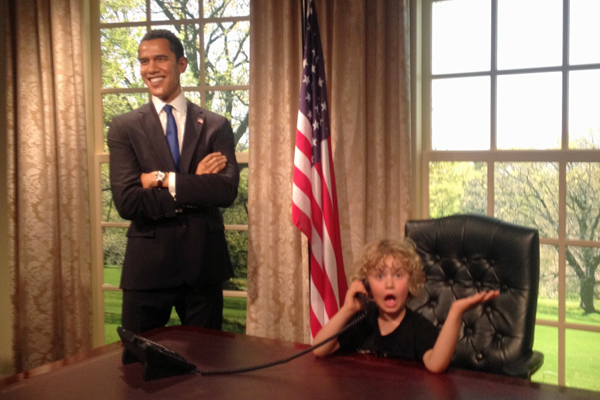 Raffles was soon negotiating with world leaders while I busied myself chatting up Brad and Johnny. And don’t feel sorry for Mr Eats World because I saw him checking out Angelina and Miranda…

All that rubbing shoulders with the rich and famous worked up our appetites (like Raffles actually needs any assistance in that department) so we took ourselves to Chinatown to consume our body weight in Yum Cha before heading the few minutes to the hotel for a dip in the heated outdoor pool. 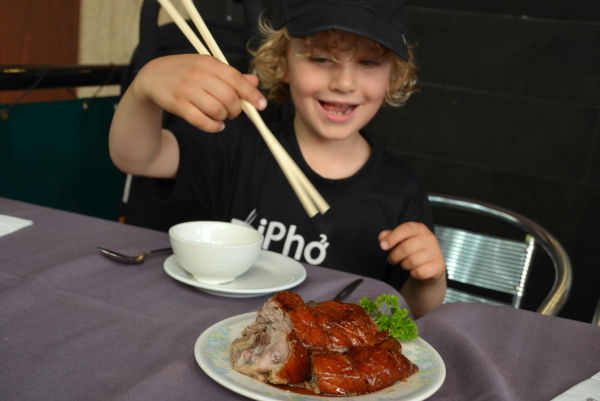